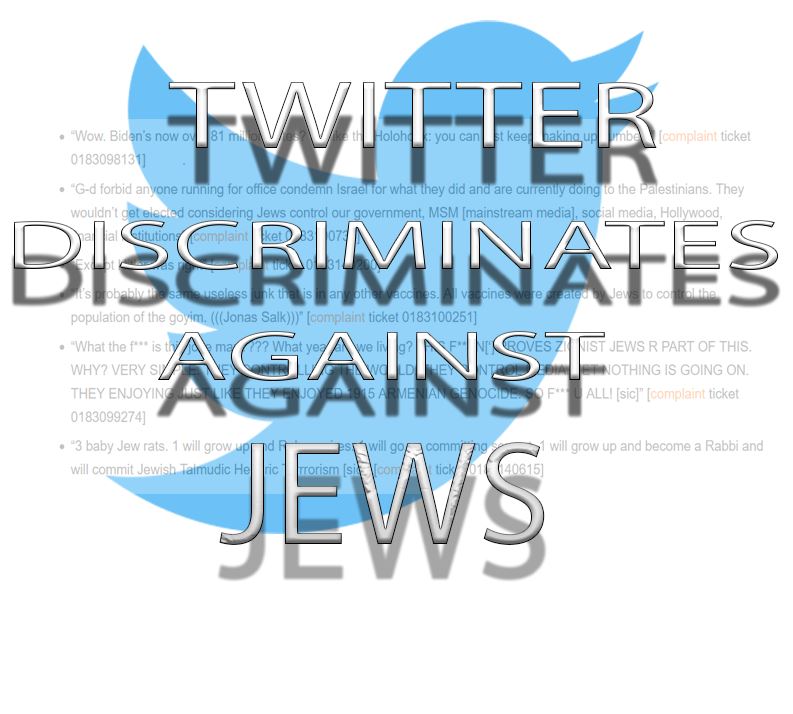 Twitter discriminates against me because I am a proud, unapologetic Jew

Twitter is a biased platform. We all know that. But their ability to influence goes a lot further than simply not banning antisemites. They also decide who to legitimise and who to refuse to give that credit to. As an example, Twitter have just turned me down as a candidate for verification for the third time.

Last year there was a Jewish boycott of Twitter because of the platform’s unwillingness to take antisemitism seriously. Twitter provides a blatantly visible example of open discrimination – in which anti-Jewish racism is treated very differently. You can say almost anything about Jews on Twitter- yet Twitter rarely responds to complaints of antisemitism the way they would if the target was a different minority group. This blindness explains why antisemitism is so rampant on the platform.

When their own ‘partners’ point out their failings, Twitter cuts all contact – just as they did recently with the Campaign against Antisemitism. Through their inactivity and unwillingness to act, Twitter permit daily racist abuse against people like me.

But the non-banning or suspending of anti-Jewish racists is only one element of Twitter’s multi-faceted discriminatory environment. ‘Zionists’ are errantly seen as ‘right wing’ and the Twittersphere leans ‘progressive’ left – which means openly unapologetic Zionists are disfavoured on the platform. It is a shifting Overton window. As right-wing voices are cut more frequently, and for lesser crimes, than left-wing voices – what constitutes the middle ground, slowly, but consistently moves further left. Eventually what was once a centrist opinion becomes right-wing, and what was centre-right is then viewed as an extremist position- and those promoting it become vulnerable to censorship or expulsion. In such a manipulated test-tube, everyone who does not conform to the progressive mindset – is standing in quicksand.

I’ve been active against antisemitism and extremism for over two decades – but only turned to publicly associating with my own research with the start of this blog in 2014.

Within a year my research saw an MP disciplined (Guardian, Independent). I was the one there – reporting on Gerald Kaufman when he made his antisemitic comments about ‘Jewish money’. My research also played a large part in the fight against the one-sided conference scheduled to take place in 2015 at Southampton University. My analysis of the participating academics was used as the evidence with which to expose the hypocrisy and bias, and thus delegitimise the delegitimisers.

Since then – the detailed research published through this blog – has consistently been driving the narrative and creating news headlines. This blog now has 1000s of subscribers – many of them politicians, journalists and academics. When a point is raised in the blog – such as the obsessive number of events held in the UK on the issue of ‘Palestine’ – that same point is soon raised in Parliament.

My reports – such as those on the Palestine Solidarity Campaign, Scottish Palestine Solidarity Campaign, Amnesty International, or on the radicalisation of members within the Labour Party – have all made the mainstream press (see examples in Telegraph and Sunday Times). I have seen the results of this work published by the Times, Telegraph, BBC, Mail, Sun, Mirror, Independent, Guardian and more.

Time after time – driving the narrative. It was this blog that exposed (see BBC, the Times) Jeremy Corbyn’s active membership in the antisemitic Facebook group Palestine Live. The report acted as a snowball and within a month – the community was demonstrating in Parliament Square.

Beyond the obvious and previously stated, my work has also:

Being a front-line soldier has a cost though – and I became a figure of hate for the other side. My name was trashed in their toxic journals – I am sent death threats and obscene messages almost daily, my website is constantly under attack – and I have been physically assaulted -twice- on London’s streets.

There are few names more associated with fighting antisemitism, anti-Zionist activity and extremism in the UK than mine. I have been publicly recognised by the Algemeiner as one of the J100 – ‘the top100 people positively influencing Jewish life’. I also have 66700 Twitter followers, 1000s of them are verified accounts – politicians, journalists, academics – and I am never abusive no matter what is thrown at me. There is absolutely no doubt about who I am – and what I do. But none of this is good enough for Twitter.

This is not about blowing my own trumpet. Anyone who follows this blog knows that goes against my very nature. But in this instance – the importance and relevance of the research is in itself – the evidence of Twitter bias. Others- who I know well – and should also have been verified – tell me of similar problems.

All you receive when verification is denied is a simple email – that neglects to tell you on what grounds you have failed. The issue here is not difficult to understand – someone who has had the impact I have had – who is as recognised in his field as I am – *and who is visibly a left leaning progressive* would already have been verified long ago. Look across some of those crank leftist nonentities who have been given that blue tick. There is even one ‘blue-tick’ account whose only claim to ‘notability’ appears to be that he was denied access to Israel because he is a toxic anti-Zionist. For him it was that simple. The reason I am not being verified is almost certainly based on identity bias. As my identity is proudly  Jewish – this discrimination is antisemitism.

There are those that will say it is unimportant, but it is discriminatory and therefore it matters. I will not apply again. Not because I do not think verification doesn’t have value on the platform or wouldn’t add power to my voice – it certainly carries legitimacy in its own environment. But because the system is rigged – and I will not play the antisemites’ game. Our time and efforts are best spent attacking the forces lined against us – not bending down before them.

From permitting abuse against me, to refusing to treat me as it does others – Twitter discriminates against me because I am a proud, unapologetic Jew.

This research is hard-hitting and unique – it goes wherever it needs to – and it depends on community support. We are in a real fight – and the results speak for themselves. For seven years I have been creating headlines. I engage in forensic research, much of it undercover, into anti-Jewish hatred, anti-Zionism and the lies they tell about Israel. My research has been referenced by every major news outlet in the UK – and many others throughout the world.

21 thoughts on “Twitter discriminates against me because I am a proud, unapologetic Jew”