On 23rd July 1866 the ‘Reform League’ attempted to meet in Hyde Park to demand the extension of the franchise. The Government declared the meeting illegal, closed the park and placed over 1000 police officers at the Marble Arch entrance in an attempt to stop the meeting. The police failed to stop them, the protestors entered the park, and three days of ‘skirmishes’ followed.

That movement for change proved unstoppable politically too. Within a year the government had passed the Reform Act of 1867. The area in which that meeting had been held was also given protection – and in 1872 another Act of Parliament led to the creation of Speakers Corner – a designated place in Hyde Park at which people could speak freely without fear of arrest or sanction. Because of the way in which it came about, Speakers Corner is embedded in the very history of the freedoms that we all enjoy. A hard-fought-for pillar of our precious British democracy.

Like most young Londoners who take a day out to be tourists, I visited Speakers Corner a few times when I was younger. I always found it a fascinating place, with numerous oddballs standing on ladders, boxes or whatever came to hand – shouting out in earnest about the specific issue that bothered them. Unfortunately, since I have been researching antisemitism, I have had plenty of cause to return – and the difference could not have been more stark. Over the last few years, there has been a distinct change, as more and more of those gathering were pushing extremist Islamist ideologies – or more importantly, intimidating those that weren’t.

Between 2014 and 2016 I would go once every three or four weeks. Then it turned to once every two months, then once every four or five. Over the last year I have been just twice – both times in some type of disguise. The reason I stopped going so often was simple – I was worried about my safety.

On Sunday, 25th July 2021 – exactly 155 years to the day after the Reform League protestors were battling in Hyde Park for the right to be given a voice, this piece of British democracy was attacked.

The targeted attack was against Hatun Tash, a Christian and Speakers Corner veteran. Hatun has a long history. Born in Turkey, she converted to Christianity from Islam and was forced to flee the rising aggression against her – as many ex-Muslims are.

Hatun is described as provocative – but then so are most people at Speakers Corner. It is in essence precisely what this pillar of British democracy was all about. The relevance here is that Hatun -an ex-Muslim – was frequently critical of Islam.

On Sunday a terrorist tried to murder her. They went for her throat with a knife and it is only through her reactions and good fortune that she only received mild cuts to the side of her face and a few defensive wounds.

Although this is the worst of the attacks against her, another regular at Speakers Corner recalls that Hatun has previously been spat on, knocked unconscious and sexually assaulted. There are also numerous videos around of her being surrounded by Islamists trying to intimidate her.

Yesterday Joseph from the Israel Advocacy Movement ran a live panel event on the attack, in which several regulars at Speakers Corner participated. The exchange brought people from all sides – including those that clearly felt that in some ways she deserved – or at least ‘asked for’ the attack. It is impossible to tell others to watch a video that in the end ran for four hours – but I can say that everyone with an interest who watches it will certainly benefit from doing so.

The most troubling part of the Hatun Tash story, which resulted in her attempted murder on Sunday – is that almost every time Hatun faced trouble, the police dealt with her – rather than those threatening, assaulting or intimidating her. She was even told that for her safety, it was better if she stayed away – a message of total surrender from the very force that is there to keep our streets safe for us to walk freely.-

At this point there are those who will remind me that we do not know the identity of the attacker – and therefore we are wrong to point the finger at a radical Islamist. I suggest that this is the response of cowards – and reflects the type of mindset that has led to the rise of this threat in the first place. This was not some random attack in the street. This was a targeted attack against a Christian preacher in an environment that has become dominated by Islamist threat and intimidation.

This is the suspect: 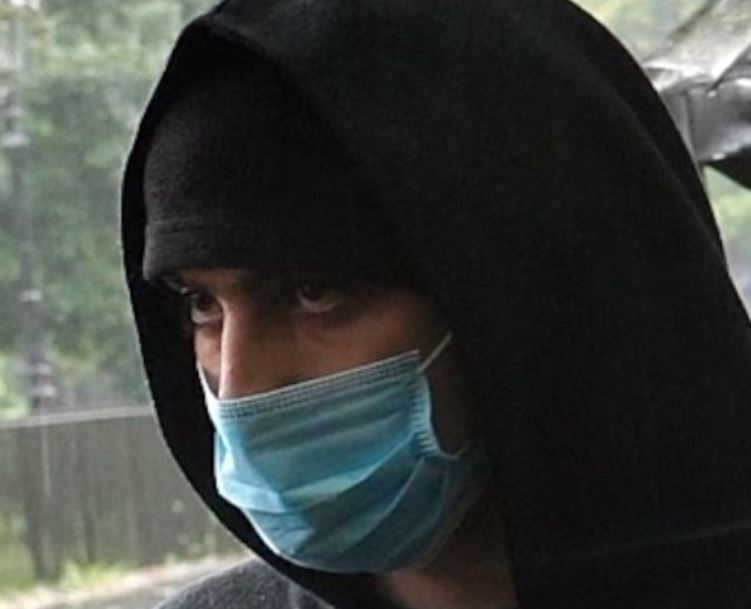 The Counter-Terrorism police are leading the investigation precisely because in this particular attack – there is little doubt about the ideological identity of the attacker. It was a radical Islamic terror attack on London’s streets. It was also an attack on Christians. Just as we see Islamic terrorists persecute and attack Christians from Pakistan to Nigeria – so too we now see it in London.

Which brings us to the scary public response to the rise of Islamist intimidation on our streets – support, cowardice or silence.

If a white nationalist had stabbed a Muslim at Speakers Corner – the media would have brought out their big guns. ‘Islamophobia’ headlines would be running 24/7 and our online news channels would be rolling out an endless reel of interviews all pushing a similar ‘broken society’ message. Social media would be awash with hashtags of solidarity from celebrities and politicians alike. How different it all is when the victim is Christian.

The horrific response 1- the Islamists

If the fact that Islamic and intimidation doesn’t scare you – perhaps the support for the attack will. Immediately after the attack – some Islamists who had witnessed the attack were standing in a group – with some saying ‘she had it coming’.

Within hours we witnessed online support for the terrorist attack. Tweets keep getting reported and deleted- but still they keep coming:

And there are those sorry that she survived:

It isn’t all about semi-anonymous accounts. Even in the IAM panel event, there were speakers that belittled or excused the event. Some seem more troubled by Hatun’s ‘provocation’, than they did the attempt to murder her. And then there were viewers’ comments such as this: 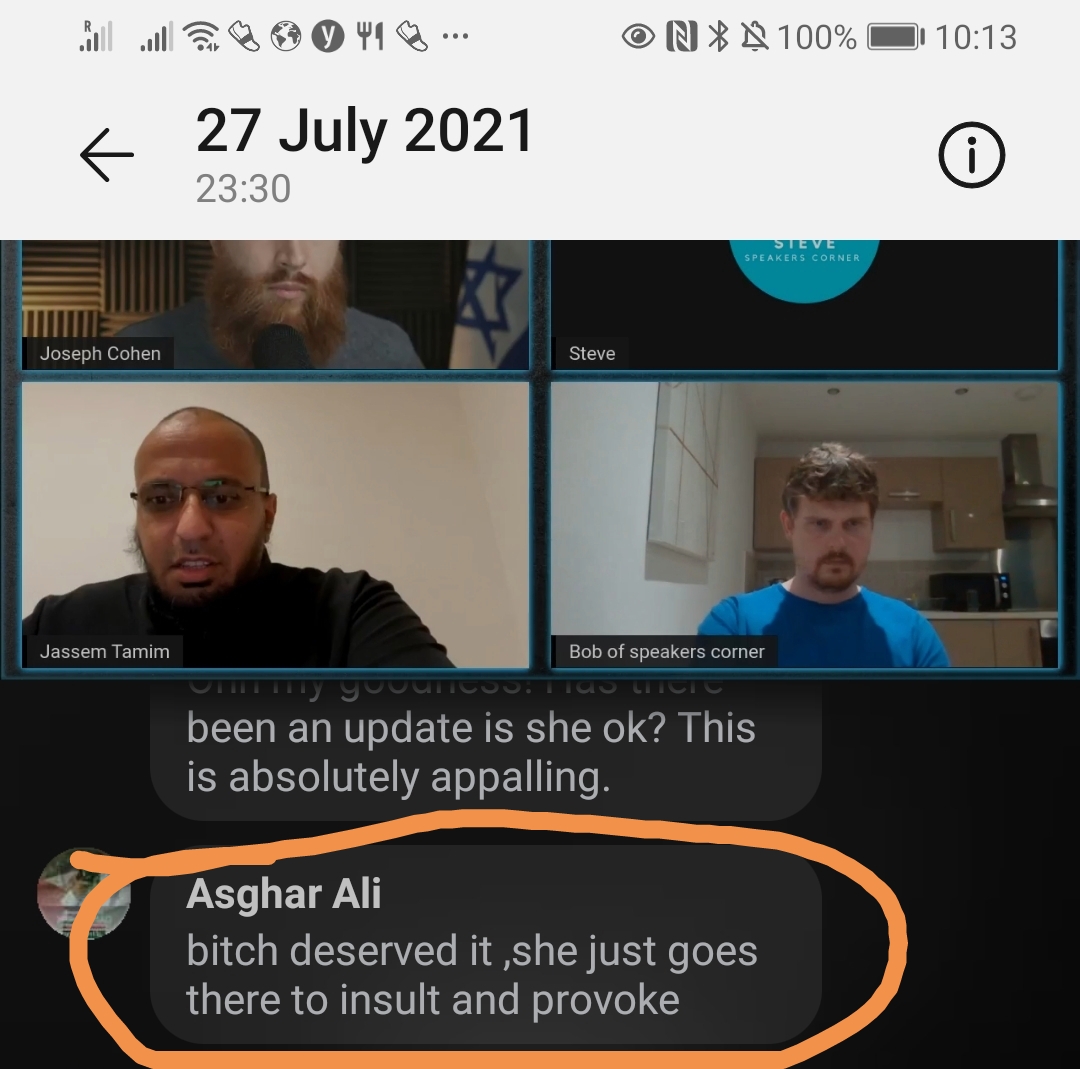 Perhaps even scarier is the virtual silence from the Fourth Estate. Sure they all ran a small piece, but it was all generic, matter-of-fact and was clearly only published to ‘tick-the-box’. Almost all of them used the same piece taken from a news-wire rather than spend any resources on it themselves. Our media simply did not want to talk about it.

Each and every one of them also focused on the fact that Hatun was wearing a Charlie Hebdo t-shirt.

And? Isn’t she allowed to wear what she likes in this country? And if this is a provocation that is described to somehow ‘explain’ or diminish the horror of the act of the person who attacked her – are we going to revert to 1970s style reporting, when the clothes a girl may be wearing become important in a rape case? The press should be ashamed to follow such a line here. What she was or was not wearing is irrelevant. She was attacked because radical Islamists do not allow dissent – and some of them will act – even to the point of killing the dissenter. That is the point that needs to be made.

The horrific response 3 – the politicians

A microcosm of British society

What happened to Hatun should be screaming from the headline of every newspaper because this is the way that the Islamists work. Some amongst them (Islamists, not Muslims) – the more radical – intimidate, threaten or kill some of their opposition. The strategy works. The opposition get the message and go into hiding.

In the end the only ones left on the street are different factions of radical Islamists, fighting for supremacy amongst themselves.

This has happened in so many Muslim majority countries it is impossible to list them all. The Islamist domination of Speakers Corner has now resulted in the attempted murder of a Christian preacher. If you speak out too much about it you will be called an ‘Islamophobe’ – as no doubt I will be for writing this piece. This is also part of the strategy. All these elements work to stifle criticism of an extremist ideology that seeks to dominate and force us into submission. We have this ideology spreading in our politics, our ‘human rights’ NGOs, our unions, our schools and clearly on our streets.

If we continue to cower in silence – then the end of our freedom is already written in stone.

This research is hard-hitting and unique – it goes wherever it needs to – and it depends on community support. We are in a real fight – and the results speak for themselves. For seven years I have been creating headlines. I engage in forensic research, much of it undercover, into anti-Jewish hatred, anti-Zionism and the lies they tell about Israel. My research has been referenced by every major news outlet in the UK – and many others throughout the world.