The propaganda surrounding Israel and the vaccine allows us a brief glimpse into the true motivations of the forces fighting the Jewish state.

The Palestinian propaganda industry is somewhat fortunate in that the core of the conflict is so often buried deep out of sight. The Jews did not just stand up and win against the genocidal forces that aligned against them, they created their state – Israel, and beat back those trying to kill them – again and again. Each time Israel won, it grew a little stronger and the Arab forces against them grew weaker and weaker.

Time was when an array of Arab national armies lined up to wipe the Jews out. Pointing out who were the bad guys was an easy task. How things have changed – Syria and Iraq are both failed states, Jordan is a basket case, and those in the hills of Lebanon stand at the edge of disaster. The conflict is a mere shadow of what it was. Because of this, it is ironically the anti-Israel activists who have a relatively easy time of it. The Palestinians have been transformed through a web of illusions into the underdog – and underdogs are always an easy sell.

Everyone has stopped asking the questions that matter – such as what motivates the Palestinian leadership, what are their end goals and are they truly willing to live side by side with a Jewish state? Instead, people just hold up both real, and photoshopped, images of Palestinian children who have lost their lives in the recent conflicts – and direct all the blame at Israel.

The vaccine and the truth

This is why the PA rejection of the vaccine deal with Israel should be used as a reminder of why the conflict still exists at all. It reminds us that the Palestinian leadership prefer to sacrifice their own people rather than shake hands with the Jewish state. This is and always has been the central pillar of the conflict.

The vaccine deal was a perfectly good deal. The Palestinians – who need vaccines NOW – would be given Israeli stock – in return for stock to be delivered back to Israel later. Israel offloads expiring stock, the Palestinians get vaccines early. It is a classic win-win situation. The alternative is that the vaccines eventually get binned and the Palestinians are left to just sit and wait. As is so often the case with the Palestinians, their leadership chose the lose-lose option and everyone suffers.

Across the world, first world nations that participated in aggressive vaccination drives are now holding vaccine stock that is due to expire. The vaccines are viable and within the expiration dates, but nations such as Israel and the US are holding stock that they probably won’t need before the mad rush for ‘booster jabs’ begins later in the year. The Biden administration is also looking to ‘offload’ stock before it expires. Nobody would think of criticising the US for taking such a step. It is the rational and humane thing to do.

Two key pieces of evidence can be tabled here. The first is that all nations are logically using ‘close to expiry’ stock first – which means the Israelis currently being vaccinated would be receiving the same jabs that weren’t good enough for the Palestinians. Second, other nations have now contacted Israel to ask about the possibility they receive the vaccine batches the Palestinians didn’t want. The situation is clearly absurd – that any leadership, anywhere in the world would turn down viable vaccines that their population desperately needs. But then the PA doesn’t operate as normal leaders would.

The vaccine and the lies

As is always the case, anti-Israel propaganda goes viral. That the story isn’t true never matters. The story spread that Israel sent the Palestinians ‘expired vaccines’:

They didn’t do anything of the sort. In the batch of 100,000 delivered were some vaccines expiring at the end of June. Just the same as the vaccines Israelis are receiving now expire at the end of June. Not a single ‘expired’ vaccine passed hands. Furthermore, the Palestinian Authority has declared it has a vaccine delivery capacity of approximately 60,000 jabs every day. 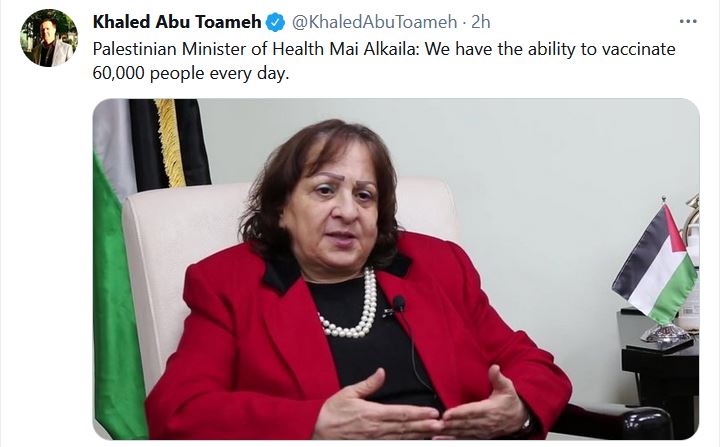 Not the first Covvid libel

With leadership that doesn’t care about the truth or its own people, the pandemic has thrown up numerous opportunities for Palestinians to spread lies about Israel. The first Covvid libels surrounded imaginary testing centres. For a while, every illegally placed tent that Israel took down, was described as a Covvid testing centre. This went on for months. It even resurfaced during the recent conflict in Gaza.  The May 2021 ‘destruction’ of the only testing facility in ‘Gaza’ story even ran in the NYT. Yet the Palestinians own Covvid update website shows no pause at any time in Covvid testing. How is it possible that Gaza continued to test if their only testing site became inoperable? – It isn’t.

The centre was so badly damaged, they even managed to capture an increase in positive Covvid test results.

Foreign news services, simply regurgitate Hamas propaganda at will. The situation is so bad now, the Palestinians do not even need to hide it. All the data is publicly available.

The NYT ran another story on this later the same week- and claimed the only testing centre was closed for 3 days.

The ‘quality’ press had no interest in how absurd the claims were – or that official evidence that they were lies was publicly available – they printed them anyway. It is simply impossible to trust any of these outlets anymore.

Understanding the truth of the conflict

When Israel was leading the world in its aggressive vaccination drive, the anti-Israel propaganda machinery went into overdrive trying to smear Israel with lies about how it was responsible for vaccinating the Palestinians. There was hardly a news outlet that did not run a version of that lie.

So this latest attack on Israel is not the first related to Covvid or the vaccine. But it is the most transparent. It shows in an instant the core of the conflict. The Palestinian leadership prefer to sacrifice their own people rather than shake hands with the Jewish state. That is the simple truth. These are the neighbours Israel somehow has to make peace with. Never forget it.