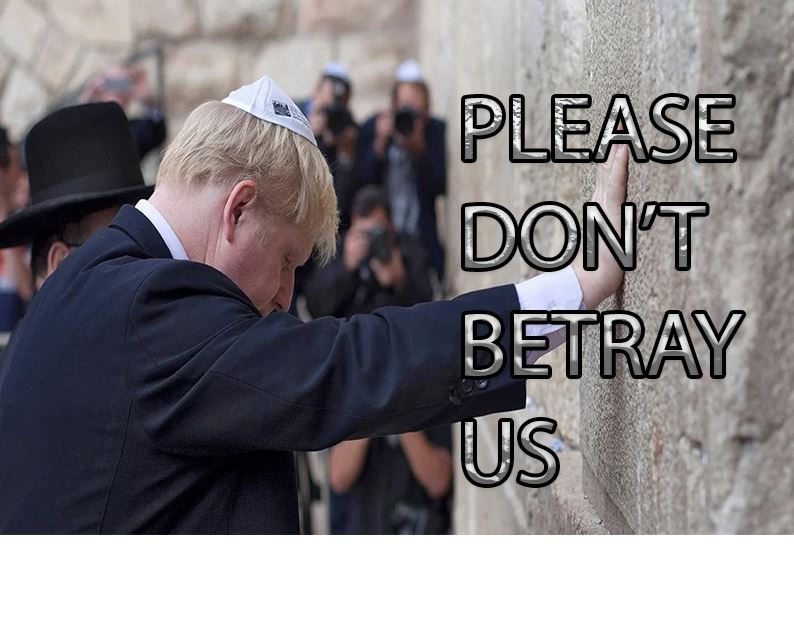 I basically have just one question to ask you – are you a man of your word? After all that British Jews have been through over the last few years, after all your promises and supportive words – it seems as if you are about to go back on everything that you promised. You are about to betray British Jews.

We all know about Durban IV. It is an upcoming anniversary celebration of that vile, antisemitic UN event in 2001. The Iranian sponsored conference of hate that did not just spawn the anti-Israel boycott movement, it also helped to legitimise and spread antisemitism throughout the west. The then UK Prime Minister David Cameron, withdrew the UK in 2011 from the anniversary event, saying that it should be condemned not celebrated. That has been the UK policy. We clearly should not be going in 2021. Both the Board of Deputies and the Jewish Leadership Council have asked that you follow the previous government position and boycott the event.

If you attend Durban IV you are reversing the UK policy on antisemitism. Why would you do this? If anything has changed since 2011, it has only got worse.

Looking back at the comments of Boris Johnson on Israel, antisemitism and the United Nations, this case is a simple one:

You have stated that you have ‘always been proud to be considered a friend of Israel’, even having spent time there as a Kibbutz volunteer. You rightfully recognise Israel as the only ‘pluralist, open society” in the region.

Boris Johnson has already shown that he knows that the boycott movement is a sinister extremist strategy to undermine and weaken Israel solely because it is the Jewish state. You spoke out against BDS even before you were Prime Minister. Your government has moved forward with anti-boycott legislation in order to thwart its spread, even including it in this years Queens Speech – thus making it an official part of your agenda. UK universities have faced growing pressure to reign in the toxic antisemitic activity and ideologies of their students. Given all this – it is unimaginable that under your watch the UK will actively participate in a conference that explicitly demonises Israel as a pariah state, and promotes the full BDS Boycott – with all of its sinister aims.

On the UN bias you have openly stated that the UK recognises that there is a continual obsession with Israel at the UN. You called it ‘disproportionate and damaging to peace’ and changed UK voting patterns because of it. The Boris Johnson I know, understands that there is, as there has always been, a bloc of toxic despotic states operating against Israel, turning international bodies into weapons to use against it. Just recently you have said the opening of an ICC investigation into Israel appeared to be ‘a prejudicial attack on an ally‘.

Given this – it is inexcusable that the UK under your watch would actively participate at Durban IV. The celebrations of Durban are the prom, the graduation party- the leading banquet, of the antisemitic extremist lobby against Israel. Why would you join the celebration?

Then there is your attitude towards antisemitism. Boris Johnson stood by British Jews throughout the ordeal with Jeremy Corbyn, and there are endless examples to be found online of you offering your support in the wider fight against rising antisemitism. You have forcefully promoted the use of the IHRA definition. At each Jewish holiday you publish a warm greeting, stating that you stand shoulder to shoulder with us. Durban IV is antisemitism central. It is a gathering of the most toxic gang of antisemites on the planet – all meeting to rub their hands and plan their next moves. As David Cameron said ten years ago – you condemn this – not celebrate with them.

Our friends and allies the US, Canada and Australia have withdrawn already. They all know their nations can take no part in this hate-fest.

When we turn to what is happening in the UK we see the results of the Durban effect. The rise of antisemitism and the threats of violence in the streets. We see the extremist banners paraded down London. The Durban IV conference, driven as it is by Islamist antisemitism and other anti-western ideologies, will further empower those that spread anti-Jewish hate and violence on our streets. This is about the safety and well being of British Jews, people that you have a duty to defend. Withdrawing immediately from the conference is the right thing to do.

You are the Prime Minister. Now is the time for you to stand up and make sure that our great nation takes absolutely no part in the anti-Jewish hate fest. Pull the UK out now.

Please do not u-turn on antisemitism – do not betray us.

Note to anyone reading: If you share this letter anywhere – or make any comment about Durban IV online – please use the hashtags #DurbanIVTargetsJews #NoUKAtDurbanIV