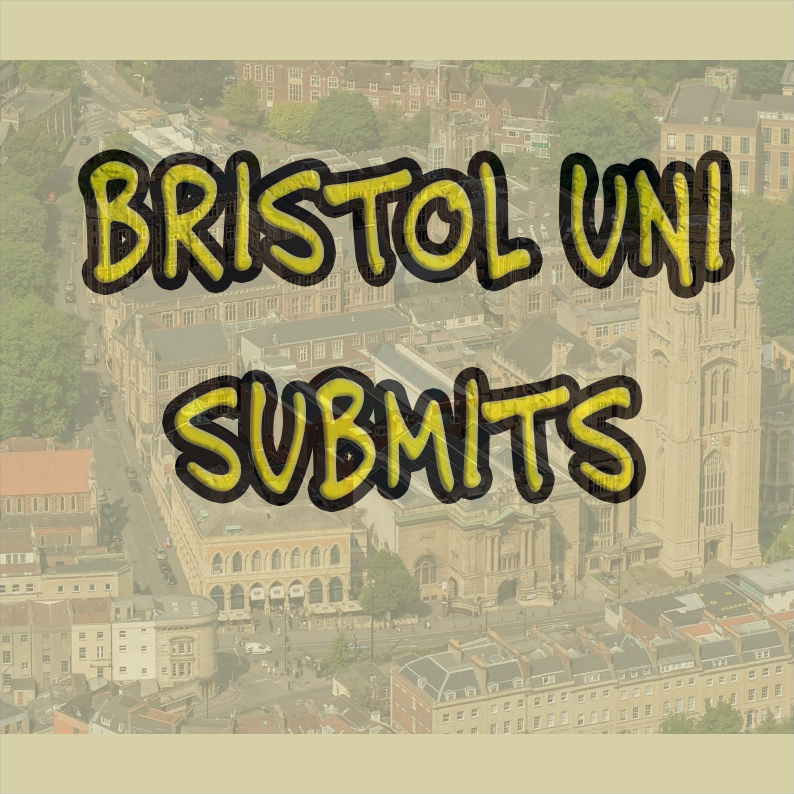 The University of Bristol submits to the Islamists world vision

It has been a long, difficult and so far unsuccessful fight by Jewish students at the University of Bristol. Professor David Miller has spent much of the last two decades mapping conspiracy theories about ‘Zionist’ power, dressing them as academia – and then teaching them to students.

Since serious complaints about him surfaced, he then turned his conspiratorial mind towards the Jewish students themselves – accusing them of being ‘pawns‘ of Israel. Despite all this, Miller is still at Bristol and teaching the offensive module in the current academic year.

The fight by the Islamic Society was far more fruitful. They wanted a module by Professor Steven Greer scrapped because they saw it as ‘Islamophobic’. His chief ‘crimes’ were to suggest that the Charlie Hebdo attack is ‘evidence of Islam’s stance on free speech‘ and he gave support to the government’s anti-extremist PREVENT program. The students also demanded that the Professor apologise.

Bristol University just caved and cancelled the module. It isn’t that the university found Greer’s stance ‘Islamophobic’ – they didn’t – but rather to protect the feelings of students, they cancelled the module so students would ‘not feel that their religion is being singled out or in any way ‘othered’ by the class material’.

The message here is simple:

You can teach that Zionists (Jews) are a powerful, hidden cabal, pulling the strings of world governments. And even add that Jewish students act as pawns of that shady cabal.

There is nothing equal about this

The trap here is to equate these two cases and become lost in an argument over free speech and academic freedom – whilst either criticising or supporting ‘both sides’. Don’t fall into this trap – there is nothing equal about them. They are in fact polar opposites.

The fact Miller can deliver his conspiracies – and there is an audience waiting to drown in them – is a sign of where wider society is now at. Miller’s teaching legitimises antisemitic thought, packages it as academia – and delivers it into the veins of students. He is part of a growing problem with antisemitism in the west. Miller can even attack his own Jewish students – apparently without consequence. This attack on students is another common trend. I personally witnessed an academic at an event at Queen Mary’s University accuse Jewish students of being spies sent by the Israeli embassy. There was no consequence to that attack either.

But in the case of Steven Greer, the lecturer simply stated that Islam has a problem with free speech – and the Bristol Islamic Society promptly proved he has a point by silencing him. This is also where wider society is now at – it runs in fear of militant Islamists. Think about it. Is the message here that studies touching on politics in Africa or Asia are not allowed to point out that ‘Islam’ has anything to do with what is occurring there? Go tell that to the Christian populations that are being systematically destroyed through Islamist oppression.

What is important to understand here – is that it is the same force that enables Miller’s free speech – that is the one that denies it to Greer. It is all about submitting to an antisemitic, Islamist world vision. If people submit to the demands and actions of militant Islamists – then this can also hold true when those demands are antisemitic in nature. The militant Islamists oppose any criticism of Islam but support antisemitic ideology. This is why Greer was quickly cancelled and Miller hasn’t been. The same force drives both actions. Which is why equating these two cases and turning this into a simple argument of free speech is to completely miss the point.

It is no coincidence that Miller also teaches about ‘Islamophobia’ (obviously blaming much of it on those pesky ‘Zionists’). Miller often speaks to an Islamist audience. This means we are not dealing with an ‘anti-racist’ stance but a perverse distortion of it. With one hand Miller enables antisemitism, whilst with the other he fights against ‘Islamophobia’. In this part of the political spectrum fighting ‘Islamophobia’ (not to be confused with actual anti-Muslim bigotry) robustly includes defending those who promote antisemitism.

Don’t believe me? Look at the timeline of any of the staunch defenders of Corbyn. Each and every one of them only ever stop belittling antisemitism when they want to talk about how serious a problem Islamophobia is. The two forces ( in this point of the political spectrum) are linked – but as opposites.

That linkage is rarely understood and the leaders of the mainstream Jewish organisations are a million miles from comprehending or addressing it. In fact, through a misuse of ‘interfaith’ for ‘interfaith’s’ sake, they even help exacerbate the problem.

I’m often called an ‘Islamophobe’ as are most vocal Zionists. I don’t actually know anyone who hasn’t been. ‘Islamophobic’ in these cases becomes a false label that antisemites use to silence Jews.

To the outsider these arguments become a meaningless ‘he said – she said’ brawl. One side is ‘antisemitic’ – the other ‘Islamophobic.’ Which is why this deliberate strategy works so well. It mirrors the argument – as most radical positions do – and projects it onto others. And when accepted – truth is lost completely. It is the same strategy that labels Israel as racist, apartheid, ethnically cleansing state – when in fact Israel is the only nation in the entire MENA region that doesn’t deserve any of these labels. Projection.

So as militant Islamists are out there shaping our academic spaces – and turning them into areas that hate Israel, won’t criticise radical Islam and are unsafe spaces for Jews – it is the tiny Jewish population that is accused of having all the power.

Therefore it is absolutely accurate to state that antisemitism is increasing under the banner of opposition to ‘Islamophobia’.

Miller receives support from the Islamists

For those that seek further evidence – as if everything that is taking place is not enough – look at the support from Islamists that David Miller has received. A letter has just been published on a website called ‘Support David Miller’. The letter claims it is from ‘Muslim supporters’. Much of the letter is about his strong stance against ‘Islamophobia’ but of course it also labels Zionism a ‘dangerous, racist political ideology‘.

The key signatures of many well-known Islamists should read as a warning sign of just what type of ideology stands behind those like Miller.

The first name on the list is Salma Yaqoob (see report from Muslims against Antisemitism) – who shared an article on ‘Rothschild Bankers’. Then there is a run of names from Islamist organistations such as CAGE, MEND and INTERPAL.

Predictably the Islamic Human Rights Commission – which leads the regular pro-Hezbollah Al-Quds march in London – is also there. As is the head of Friends of Al Aqsa – another extremist Islamist group. So too InMinds – which for years had a Holocaust denier as a spokesperson.

Shakeel Begg signed too. Begg lost a libel suit when the BBC described him as an ‘extremist’. Ms Aysha Khanom, another name in the list, was once fired for using racist language in tweets.

Given the toxic levels of the more well-known names, it was considered a pointless exercise to run through all the 700 names to find further evidence of extremism. Nevertheless, I had a look at a handful – and in each that I looked at – the same story appears. These three examples show one signee – Waltham Forest Mosque’s ‘Said Totti Looch‘ – displaying three key attributes.

1. A post stating Israel has no right to exist.

2. A post referring to a film production company as a ‘Jewish film studio’.

3. An attack on a Mosque’s integration into wider British society by referring to it as a ‘House Mosque’. 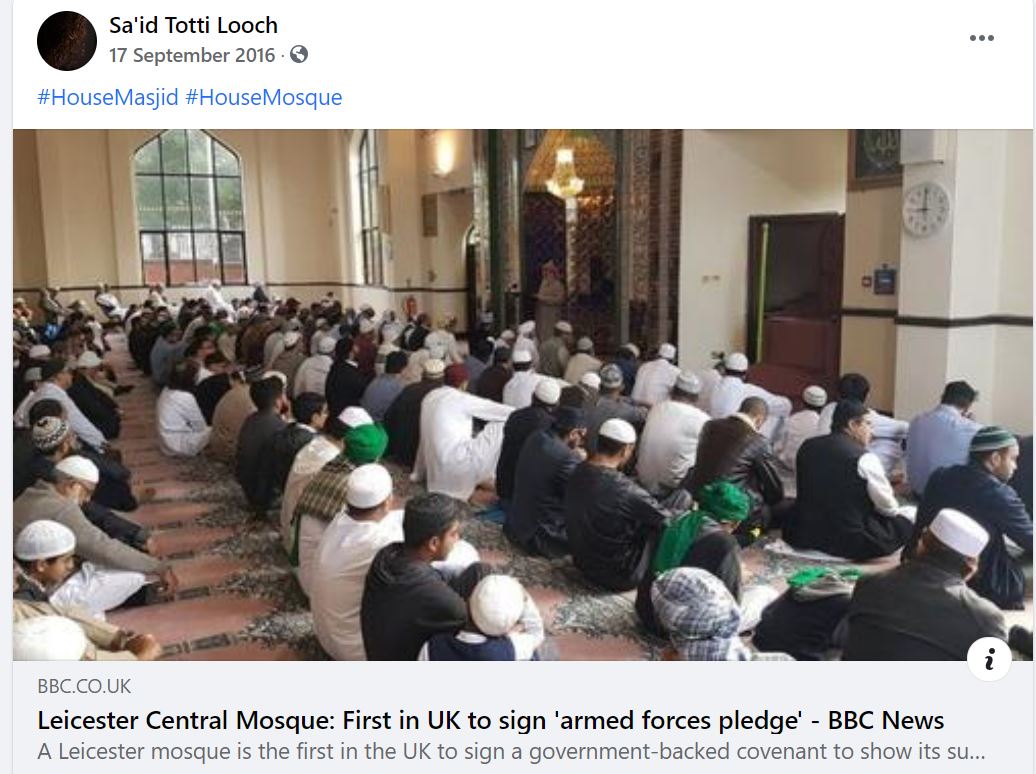 Islamists in the veins of academia

In a tragic sign of how deeply embedded in academia all this actually is – the Miller ‘Muslim support’ letter carries hundreds of names from academia. A list of Professors, Doctors and students have signed, signalling their support.

Hundreds of academics. People out there – in UK universities – teaching students about how the world works. Bending the views and values of the society we live in towards a more Islamist (and far more antisemitic) version of itself. And those who have the power to stop it are simply submitting to the will of the radical crowd. Just like Bristol University just did.

To anyone who is not scared of this problem already – or fighting against it already – please wake up!

Can you support help to support my research?

If you can support with a regular monthly contribution, you can make it happen via my Patreon page

Your support is both needed and truly appreciated.