I doubt many have heard of Safiyya Shaikh. She was a Muslim convert who plotted to blow up London’s St Paul’s Cathedral and then kill herself in a suicide attack somewhere nearby on the London Underground.  Fortunately, the intelligence services got to her first The BBC news reports at the time tended to focus on a ‘drug addict’ element, which like the ‘mental illness’ excuse – diverts attention away from the murderous Islamist ideology that actually drove the planned attack.

Shaikh was jailed three months after another Islamist terrorist, Khairi Saadallah, went on the rampage in a Reading park, murdering three – because – as the BBC told us – he was ‘suffering from episodes of psychosis’. In the same article, they went as far as running a headline to suggest the terrorist’s interest in Islamic Jihad was only ‘fleeting’.

Just as the BBC distorts headlines and articles to suppress the true aims of the forces attacking Israel – it seems the BBC also wants to downplay the dangers of the radical Islamist extremism facing the British public. But what is of interest to this piece – is not the BBC misreporting I found (now in my in-tray for another day) – but rather the intended target of Safiyya Shaikh – which was St Pauls Cathedral – one of the most important and recognisable Christian landmarks in the UK.

In July there was a terrorist attack against a Christian Preacher, and the Islamist who tried to murder Hatun Tash at Speakers Corner has not yet been found. Muslim converts to Christianity are always a key target. Another convert, Nissar Hussain ended up in hospital following a violent attack by an Islamist mob. Church buildings and property have also been a focus of Islamist attacks in the UK for over twenty years. Because the method of attack is often arson, the identity of the attackers is often unconfirmed and open to conjecture.

It doesn’t just happen to Christians and converts – Nur Dahri, a well known Muslim who is an ally of British Jews (and personal friend), also ended up in hospital after he was attacked in the street in early 2020. Being ‘different’ or ‘dissenting’ makes you a target. Saqib Rehman and his brother Wasiq have recently been sentenced to jail time for stamping on a gay man’s head.

UK church leaders have called for a massive effort to save Christians around the world because they are ‘under attack’. A UK government report suggested the levels are so high that in some areas it can be called a ‘genocide’. Few mainstream outlets are willing to discuss Islamist oppression overseas – even fewer ever discuss what is happening on our own streets. Those that do are automatically branded ‘Islamophobic’. When others in the mainstream are forced to mention the subject – like with the BBC – they invariably tell us the attack was a result of drug addiction or mental illness. Church leaders who are worried tend not to speak out either – in fear of making themselves a target. Intimidation by UK radical Islamists is a taboo subject.

If your response to all this is because it is ‘Dewsbury’, ‘Bradford’ or ‘Luton’ – you are making a huge mistake. You are also engaging in a racism of low expectations and giving up our Muslim populations to the extremists that seek to control them. If it remains unaddressed in ‘Dewsbury’ or even ‘Speakers Corner’ it will be unaddressed in Leicester and Birmingham and Blackburn too. As well as several parts of London. Then what? Or where?

The legitmised attacks on Jews

Whilst attacks on Christians still occur in the dark – those against the Jews happen in broad daylight. A man has recently been arrested following a spate of attacks on Jews in Stamford Hill. The man’s MO was simple. He would simply walk by someone who looked visibly Jewish and then punch them.

It is only a few months since a convoy of cars drove through a Jewish area calling for the ‘rape’ of our daughters. This got mainstream attention because it happened on our own doorstep. It also fits the narrative – the ability to blame a couple of extremists and pretend there is not a far wider problem.

But at the same time as those cars drove through North London – hundreds of other Islamists gathered in cities throughout the UK and chanted Islamist songs about massacring Jews. Those actions received absolutely no coverage outside of the Jewish bubble. Hundreds of Islamists actually marched through the streets of the UK, promising the Jews that the army of Mohammed is returning to slaughtered them – and not a single mainstream outlet gave a damn. It is too ‘real’ to be addressed – and anyway they think, ‘it is only the Jews’ – it is all because of ‘Israel’.

Rather than see Israel as being under attack from the Islamists – this twisted logic actually blames Israel for the hate it receives from radical Islam. A classic case of reverse causality. It is part of the societal pyramid of lies that has been built up to stop people in the UK understanding what is taking place in places such as Dewsbury, Bradford and a dozen other towns. They have legitimised attacks on Jews and given up the Jews to the Islamists, in the hope that the Islamists won’t turn their attention on to them.

So they turn a blind eye to anti-Jewish activity as long as it carries the Palestinian flag and doesn’t explicitly call for rape. ‘Palestinianism’ is an excuse that allows radical Islamists onto the streets with their murderous chants. They can even openly threaten Jews as they walk alongside the British police and the police don’t do a thing.

What we have witnessed this year – in the covoys – the attacks – the threats – is not an increase in extremism (the extremism is already there) – it is an increase in confidence. And for that our Government, security forces and police are all firmly to blame.

Out of sight – out of mind

Umar Haque was a teacher at a private school at the Ripple Road mosque in Barking. He taught Islamic studies. He was also an ISIS sympathiser and tried to groom an “army of children” to launch simultaneous terror attacks across London. Part of the problem is that it takes this level of extremism before action can be taken. It shouldn’t need a teacher training children to be bombers before we say ‘enough’.

Ed Husain’s recent book ‘Among the Mosques: A Journey Across Muslim Britain’, exposes intolerance and hatred preached by Islamist extremists in the UK. It is a scary read – but at least it points a finger at why we are witnessing more public extremism. If the interfaith process works, if Islamic leaders are speaking out (and acting) against the rise of Islamism and if the Muslim community is successfully educating in a moderate voice – then what we are witnessing would not be happening. Clearly something is wrong – and the failure to speak out about it – whether from fear or political correctness – is only contributing to the problem.

The truth is that some around the country are freely and publicly spreading hate. This history lesson extract from the website of the Rochdale Central Mosque is a fine example:

There was no ‘war’ in 1929 – there were anti-Jewish pogroms – massacres of innocent Jewish communities in Hebron, Tzfat and Jerusalem. The extract disgracefully turns the Arab into the victims. The 1935 reference is also troubling. Izz ad-Din al-Qassam was not Palestinian, he was Syrian. He was an Islamist terrorist who targeted innocent Jewish civilians as well as the British. Hamas even named their military wing after him. The use of the word martyrdom to describe a killer of civilians is unsettling. The description of the Mandate as an ‘occupation’ is anti-British ahistorical poppycock. The website even claims that Jews are not actually Jewish. Is this really what some Mosques teach to Muslims in the UK? No wonder antisemitism is on the rise. These are lies, mixed in with blatant pro-terrorist sympathies that are designed to radicalise worshippers against Jews. Why is nobody talking about this?

And look at this image – taken during the summer. A group of children being used as part of a protest – all holding up ‘killed by Israel’ signs: 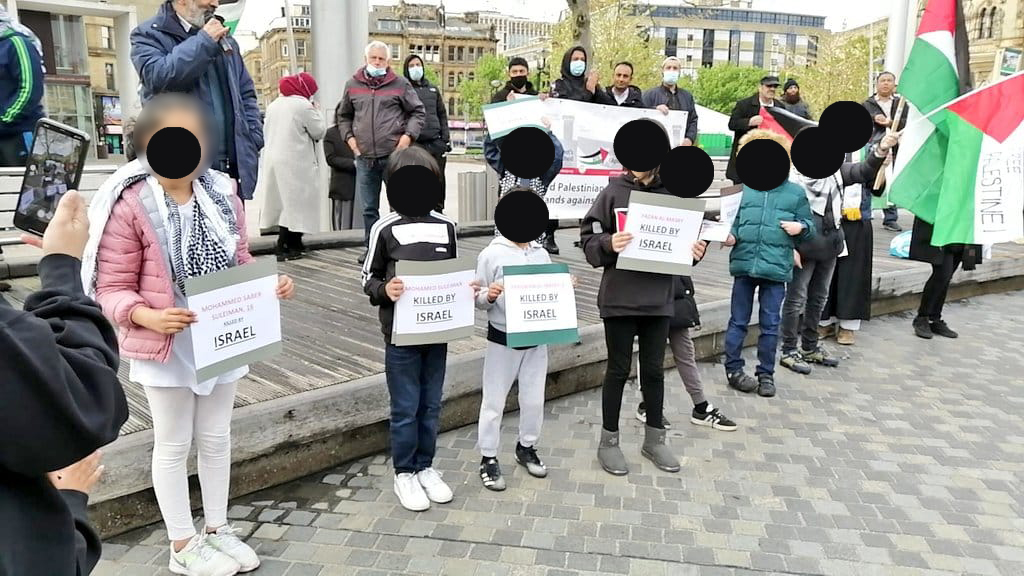 What messages are these children learning?

Away from our Jewish bubble, this type of unacceptable behaviour is taking place *everywhere*. Kick Off is a sports venue. This vile Facebook post talks about a ‘Zionist occupation‘ and aligns with the hard-core Islamist narrative of ‘Friends of Al Aqsa’. Nobody took any notice at all. 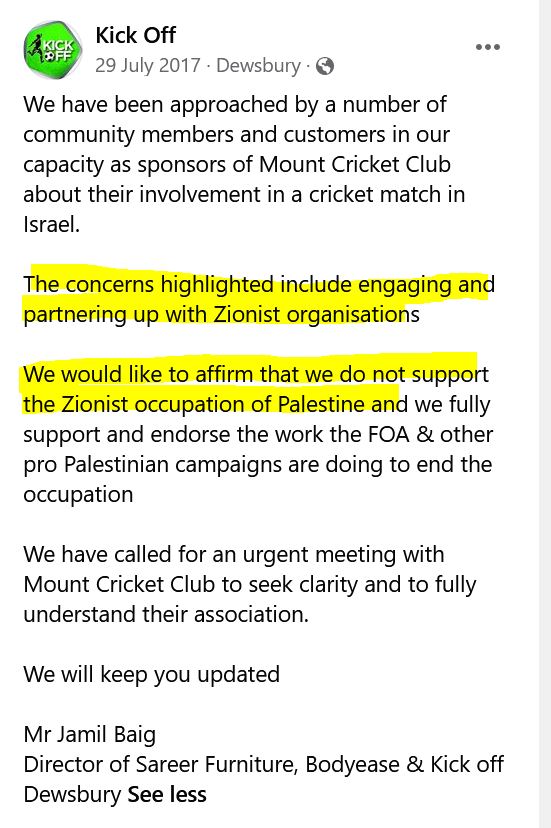 ‘Kick off’ claims it is an FA accredited 5-aside football venue. The website proudly suggests it has been cleared by the ‘Bradford Safeguarding Children Board’ – which raises a serious question. How can a venue which publishes politicised racist messaging have ever been considered fit for children?

One last example. This young boy, in London Whitechapel in 2021 – is holding aloft the Islamist Black Standard: 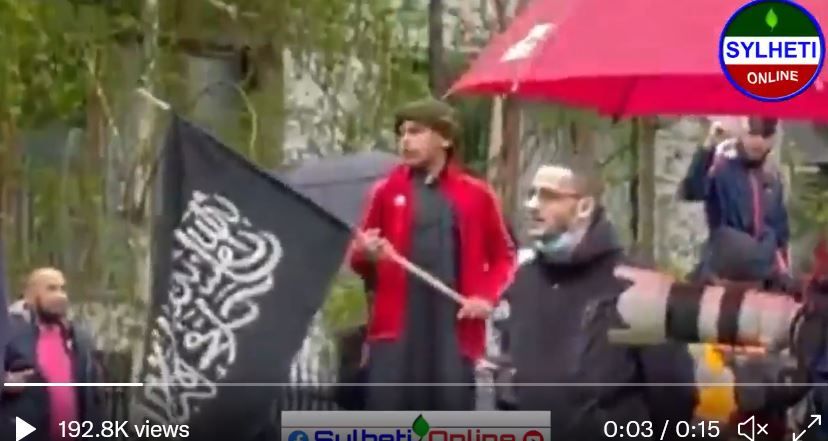 But it is considered okay – because all this hatred is only directed towards Jews. And that’s a fatal mistake.

Jews are attacked in the streets, Christians are attacked in the dark – for now. Anti-Sikh hate crimes are also spiking. If we ignore what is happening it will only get worse. What many fail to realise is that attacks do not have to be commonplace. Intimidation is all about fear and submission to the *threat* of violence. It keeps people in line without the need to consistently attack them.

Nobody will talk about any of this because everyone is scared and nobody knows what to do. Hate is freely being spread around on our streets under an Islamist banner. Even amongst children. There may not be a clear answer about how to deal with all this – but you can be sure that sticking our heads in the sand and pretending it is not happening at all is not one of them. One thing is for certain – if you do not stand with the Jews as the hate against them rises – Christians, Sihks and others will be next. Unless we deal with it together – eventually we will all fall.

Can you support the struggle for truth in the new year?

I want to take this opportunity to wish everyone a happy – sweet and healthy Shana Tova (new year).