An open letter to Edinburgh Council (an email containing this information was sent to all sitting Councillors).

You will soon be debating the twinning of Edinburgh with Gaza again.  When you were due to debate the motion earlier this year I received an abusive, antisemitic email from the proposer of the motion, Pete Gregson. Since then, I have discovered far more about the twinning campaign – the antisemitism that drives it – and its ties to radical Islamic terror groups. I urge you to read on.

As a quick introduction to those Councillors who have recently taken up their post: I am an investigative journalist who has been researching antisemitism within anti-Zionist activity for many years. My research has been published in all of the mainstream media outlets. In 2017 I was recognised by the Algemeiner as one of the top 100 people ‘positively influencing Jewish life’ and in 2022, the media watchdog CAMERA gave me a ‘Portrait of Courage’ award. As a consequence of all this, antisemites like Pete Gregson tend to dislike me even more than they normally would.

I have been following and investigating the Edinburgh Council motion to twin the city with the city of Gaza – a municipality under the control of a proscribed radical Islamic terror group.

Edinburgh Council and the antisemite

A basic fact of this motion is that you are only sitting to debate twinning with Gaza because of the activity of Pete Gregson. If not for him – and the antisemitism that drives him – it would not even be on your agenda. However much he may choose to protest it, Gregson is an abusive antisemite and Holocaust denier. Gregson did not just ridicule my name and my Jewish identity – he even believes that Zionist Jews were not actually victims of the Holocaust at all:

“So Hitler gassed millions of Jews, only they were the Bundists, leaving the Zionists to crow over their dead ashes and demand a colony of their very own to make amends for their dead brothers and sisters who did not want to live in a racist colony at all, thank you very much.”

The idea that Hitler somehow separated Jews according to what they politically believed is a denial of the very essence of the Holocaust – the intent to eradicate the Jews completely.

The truth is that everyone knows that Pete Gregson, the proposer of this motion, is a toxic antisemite. But antisemitism is only the tip of the iceberg.

Gregson recently sent you all an email, informing you that the Secretary of the Edina-Gaza Twinning Association lost his cousin during the recent fighting. For once he was telling the truth.

The Secretary’s name is Mohammed Almadhoun, and he indeed lost his cousin in the recent fighting. This is the picture Almadhoun chose to post of him: 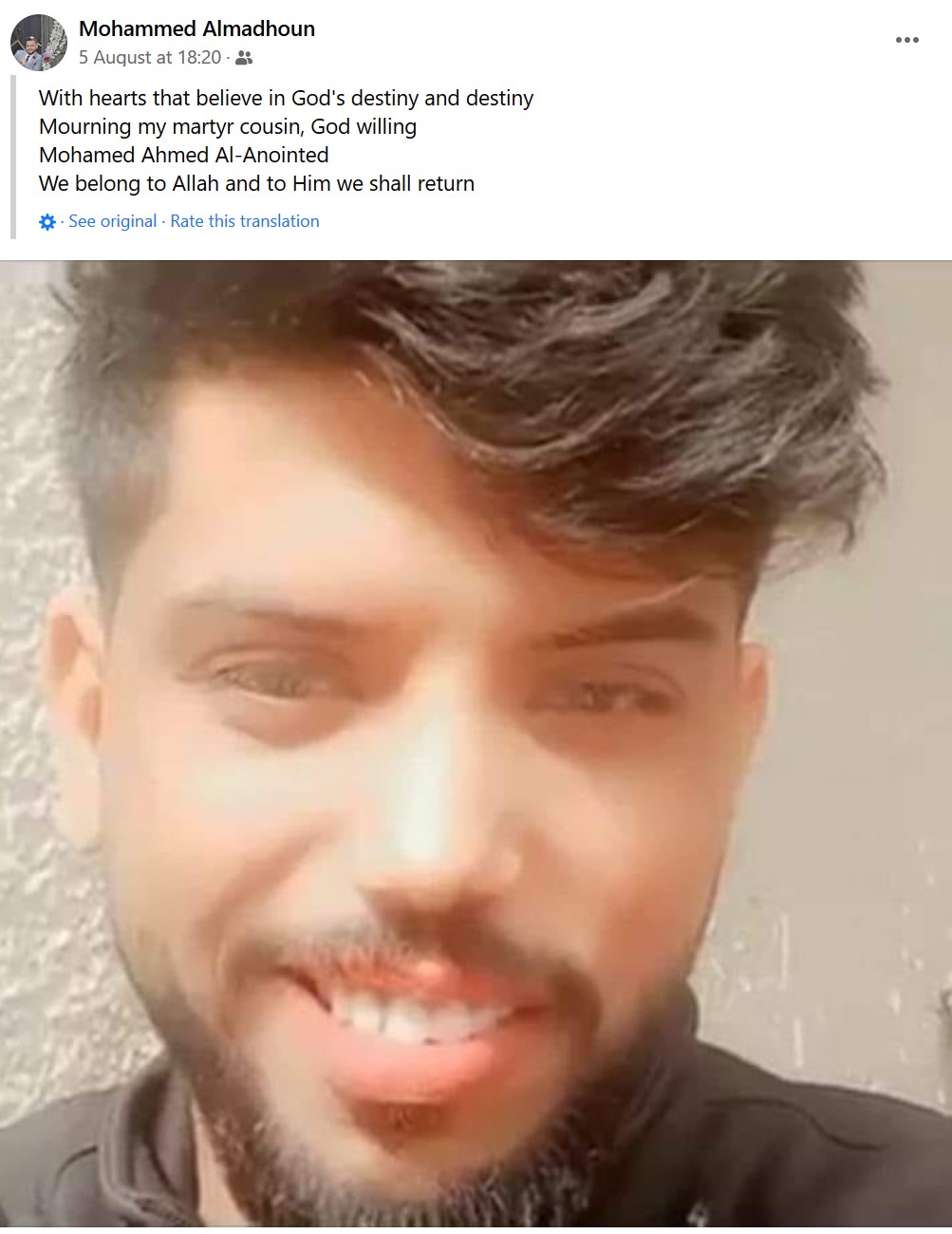 Mohammed Almadhoun created his Facebook account in August 2019. I have no idea what his previous Facebook page looked like, what he posted there – or why he decided to create a new one – and importantly – you have no idea either. His family members are not under your watchful eye, so they felt no need to hide the truth. These are the images that they posted: 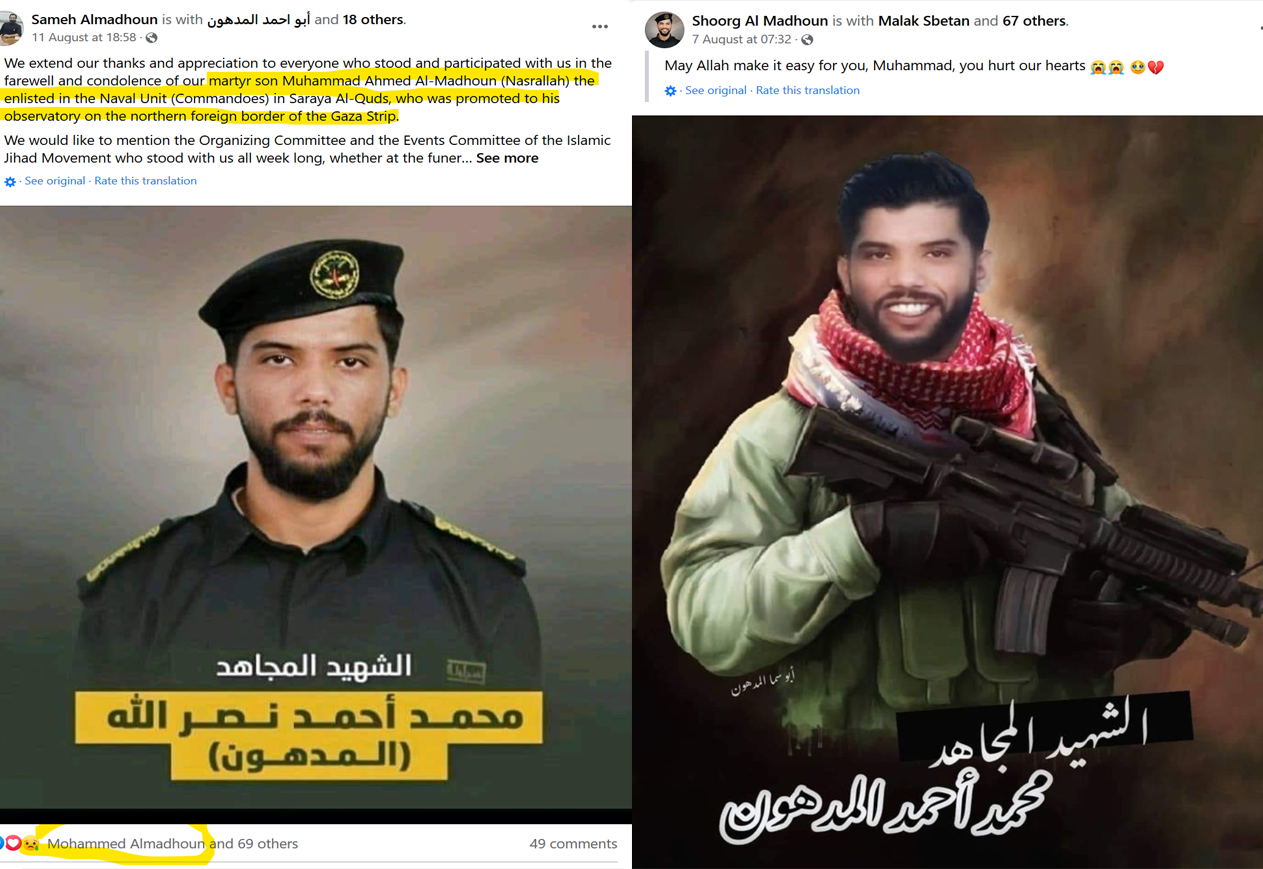 The cousin, Muhammad Ahmed Al-Madhoun (Nasrallah), served in ‘Saraya Al Quds’ (the Al Quds Brigade), which is the military wing of the Islamic Jihad. He was active at the time he was targeted by Israel and the Islamic Jihad put out an official posting about his death. You’ll note that Mohammed Almadhoun, the Secretary of the Edina-Gaza Twinning Association, liked (and commented) on the post (left) of his cousin in uniform.

Nor is he just a ‘distant cousin’. In an image taken at the funeral, you can see Mohammed Almadhoun standing at the entrance of the doorway at the house of mourning. You can even see the Islamic Jihad shroud covering the body: 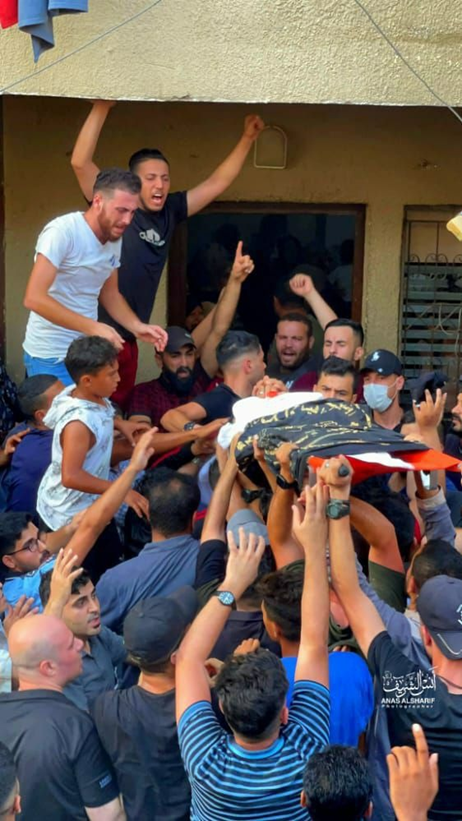 This highlights the key problem inherent in ‘twinning’ with Gaza. Mohammed Almadhoun is both well aware his cousin died in combat whilst a member of Islamic Jihad and he understands he cannot show this to you. Gaza is a propaganda machine driven by radical Islamic terror groups. There is a veil over Gaza you cannot penetrate – which means you can never know who or what you are actually talking to, dealing with, or providing with funding.

The truth is that terrorist groups like Islamic Jihad and Hamas adore people like Pete Gregson. These groups are just looking for people to ‘dupe’. This is why we see so many ‘middle-men’ in Gaza with perfect English and new social media accounts who ‘hide’ the truth from foolish western activists. How can anyone possibly know what connections they have?

Let’s face it – even the twinning association has terrorist ties – and you did not know that they were there.

Then there is Hamas

The Al-Madhoun clan is actually one of the largest families in Gaza. It has a long history and many of its members have held important posts. The family actually have their own Facebook page. They posted this about the funeral of the Islamic Jihad terrorist: 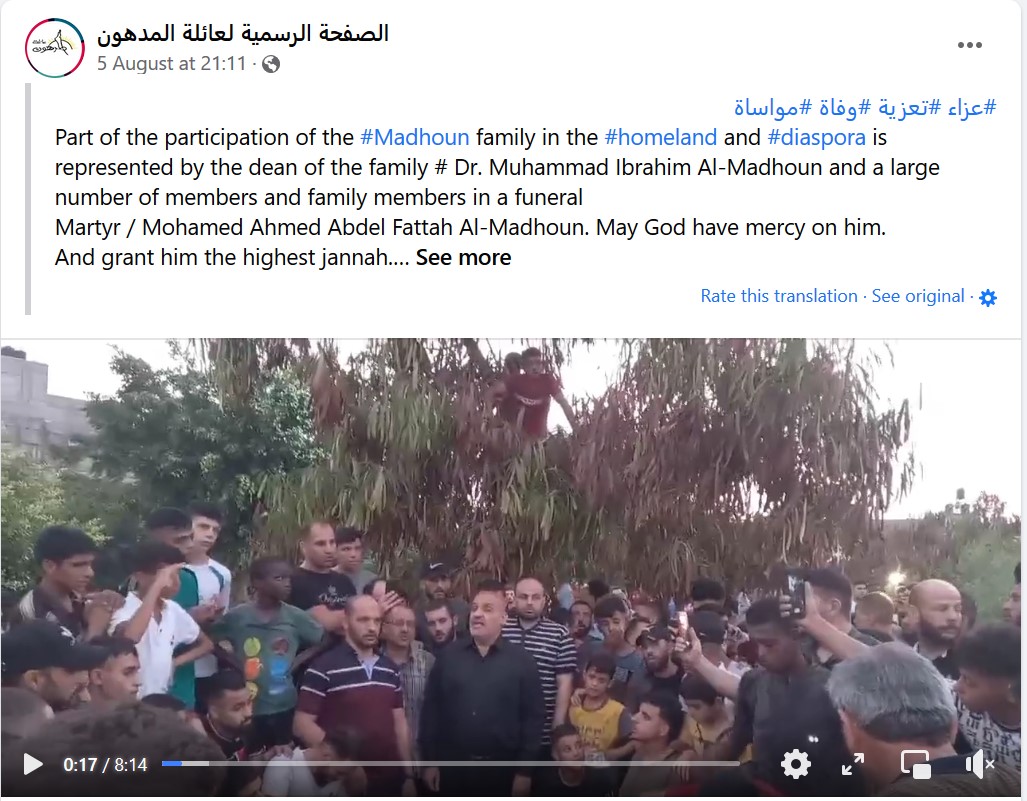 You’ll note that they mention that the head of the clan is ‘Dr Muhammad Ibrahim Al-Madhoun’ – who attended and spoke at the funeral. Dr Mohammad is part of the Hamas hierarchy and is currently Head of the Refugee Affairs Division of the Hamas movement. 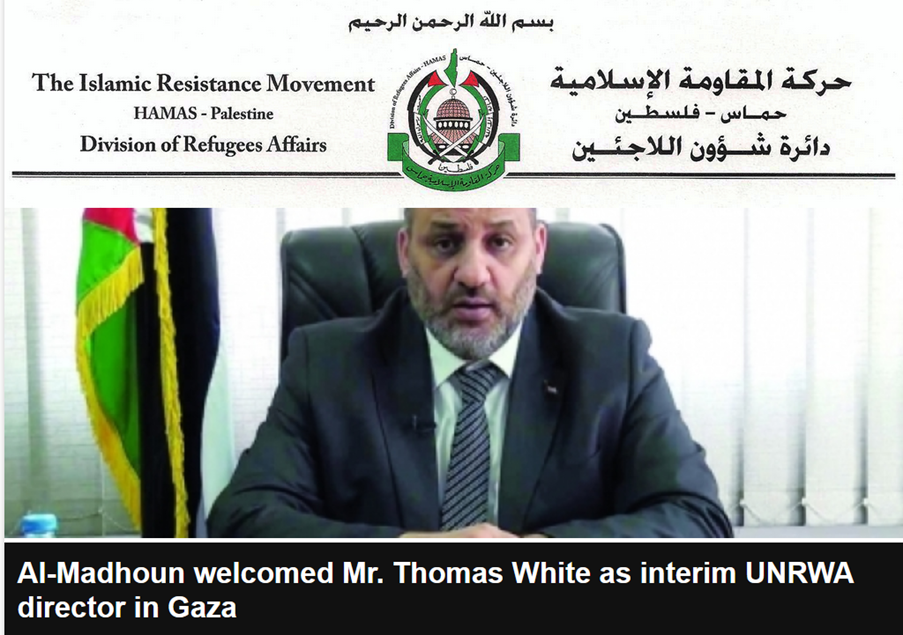 He also posted on his own personal page about the funeral.

Who has links to what? What are the exact relationships? I have no idea – but can Edinburgh Council seriously believe that it can confidently build bridges with Gaza in the belief that the people who you are dealing with there are telling you the truth? This is the first association you seem to have built bridges with that has connections in Gaza, and just scratching at the mask exposes links to proscribed terrorist groups.

Pulling the wool over your eyes

I understand that Pete Gregson and the SNP MP Tommy Sheppard met recently to speak about publicly distancing Gregson from the twinning campaign. Gregson is telling people that Sheppard wanted Gregson to cancel a tour about ‘bogus antisemitism‘ that he had scheduled, as the bad publicity it would receive would interfere with support for the campaign. This seems somewhat underhand as it suggests shielding the truth from people about Gregson’s toxicity until after the vote. I approached Sheppard for comment, and he admitted that they met. This is what he wrote:

“I met Pete Gregson expressly to tell him in person that he and his views were not welcome in what should be a broad-based civic campaign to build solidarity with the people of Gaza. As he has not stepped aside from his role in the twinning association, I will be encouraging the City of Edinburgh Council to pursue links independently of it.”

The statement doesn’t seem to make sense. I have never met anyone I didn’t want to have anything to do with – why would I give him that respect? Would any of you choose to meet a toxic racist? This whole scenario is beyond unhealthy, and it is shameful that Edinburgh Council has been brought into a campaign that ties it to antisemites and proscribed terrorist groups. Cutting out the proposer doesn’t clean things up.

Throw the motion out

The bottom line remains that you would not be sitting to discuss the motion – if you did not have someone in your district so driven by his antisemitism, he brings those with links to terrorists to your door. And as Gaza is an entity fully controlled by proscribed radical Islamic terrorists you cannot possibly know with whom or with what you are building ties.

You should throw the whole shameful motion out!

8 thoughts on “An open letter to Edinburgh Council – are you in bed with terrorists?”