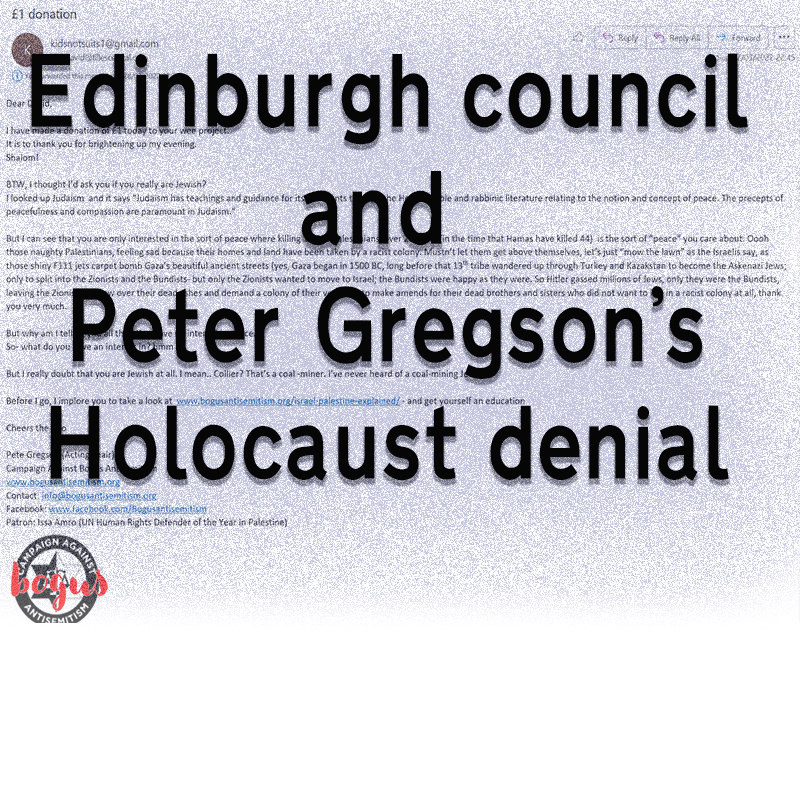 Today, Edinburgh Council withdrew discussion on twinning their city with Gaza – as they finally realised (thanks mainly to the great work of UK Lawyers for Israel), that there may be legal issues with twinning Edinburgh with a proscribed group of radical Islamic terrorists.

This is a related post about an email that was sent to me by Peter Gregson, the activist behind the Edinburgh / Gaza twinning campaign.  A few days ago I published an article about Gregson and the Gaza petition. I detailed some of Gregson’s toxic history, and additionally pointed out numerous lies / distortions contained within the petition text. Later that evening, Gregson sent me a £1 donation, probably to acquire my email address. Sure enough, shortly after this, I received an email from him.

I have uploaded the email I received in full. I think it is important that people see and understand the unhinged level of anti-Jewish hate that fuels the anti-Israel movement in the UK. It is also important that others see the abuse that Jewish anti-racists receive. I must add that I forwarded this email to each of the councillors on the committee involved with this debate. I wanted them to know exactly what force lay behind the motion they were due to discuss.

The email in its entirety is an ahistorical, antisemitic, Holocaust-denying, abusive rant, and provides an important window into rabid antisemitic ‘anti-Zionism’. I highlight three key parts of the email here:

Peter Gregson – “You are not Jewish”

Gregson is fixated on my identity, both opening and closing the email with issues about my name. Initially, he asks if I am really Jewish, before he goes on to state “he really doubts I am Jewish”:

“I really doubt that you are Jewish at all. I mean.. Collier? That’s a coal -miner. I’ve never heard of a coal-mining Jew.”

Like most British Jewish families, mine suffered antisemitism in the UK. As a young girl, my mother was refused entry to her street party in celebration of the coronation in 1937 because George VI, ‘”was not her king”. She was just 5 years old. My Grandfather had a shop, violent antisemitic fascism was all around, and he found himself the victim of local antisemitic thugs. Like many British Jews in the early 20th century, he changed his name to help escape some of the racism. The sign on the shop window changed from ‘Cohen’ to ‘Collier’ and shortly afterwards the windows stopped being broken.

Gregson displays total ignorance about how minorities deal with the racism they experience, and how victims more generally shield themselves from abuse. His grandfather’s generation abused my family to such a degree that they were forced to hide – and today he disgracefully mocks me over it. Thankfully, the key difference between then and now – is I won’t cower, and I won’t hide. I am a Zionist; I am a proud Jew – and the days of us running from the likes of Gregson are thankfully long behind us.

Put aside the fact that Gregson is pushing Arthur Koestler’s Khazar myth – which denies Jews their history. I also do not want to focus on the ahistorical Bundist rewrite, which misunderstands Bundism entirely. Nor will I expand here on the lie that only after the Holocaust did the Jews make demands for a state. These are all points I can make another day.

I want to deal only with the Holocaust denial. In this email Gregson states that Hitler only killed Bundists. He goes on to say that the Bundists died and the Zionists lived. Which means – obscenely, in Gregson’s eyes a bad Jew is one who survived Hitler’s slaughter. The good Jews all died. Gregson is taking ownership of the Holocaust – and he – and the Palestinians become its living victims. I, as a Zionist am disconnected from the Holocaust – and become a ‘demon’ who profits from the suffering of others.

Gregson – ‘I looked up Judaism’

Finally, there is the part of the email, where Peter Gregson tries to tell me, a Jew, what ‘Judaism’ is about. It is not just that Gregson fails to understand that ‘Jewish’ is not the same as ‘Judaism’, falling into the classic trap that many people who can only understand religion through Christian eyes fall into.

It is more about the racist arrogance that sits behind the comment. Peter Gregson’s mind is full of misconceptions and false history. He has so wrapped himself up in this hatred, that he actually believes in what he promotes. And he is so sure about his position, that he is confident enough to racially abuse Jewish people who support Zionism. This is what antisemitic anti-Zionism turns these people into – racist abusers.

The entire petition process has been built with antisemitic lies and was put together by a Jew hating racist. In the email Gregson claims that Israel ‘carpet bombs Gaza’ which is nonsensical garbage. He also claims that Hamas have only murdered 44 Israelis in more than 20 years, which is absurd. On Gregson’s website, which is the biggest load of ahistorical garbage you will likely ever see, he even tries to pass some Holocaust images off as being from the 1948 civil conflict. Lie after vicious lie.

Instead of rejecting the petition outright – as they should have done – this is what the councillors in Edinburgh intended to give a platform to – until they were scared away by potential legal implications.

I received two responses from Councillors to my forwarded email. They were strange to say the least. As the vote did not take place, it is difficult to decipher what the Councillors had intended to do – and for this reason, I am currently not publishing the emails I received.

It is also interesting that Gregson lists the Palestinian activist Issa Amro as a Patron of his antisemitic gang. I asked Amro directly if this were true and his response was not clear, so I have since forwarded him Gregson’s email as he requested – and await his response.

I will keep you posted.

68 thoughts on “Peter Gregson and his racist, abusive email”