Exposed: The Secretary of the Edina-Gaza Twinning Association is not just tied up with terrorist groups like Islamic Jihad – he is scamming the people of Scotland for their cash.

Edinburgh Council has just released the agenda for their upcoming meeting on the 30th August. Shamefully it confirms that they will be debating the twinning of their city with Gaza. In effect Edinburgh Council are going to do exactly what Islamic Jihad and Hamas want them to do.

If you have any doubts, just look at the person who proposed the motion – Pete Gregson, and I am not even referring to his vile antisemitism. I just scratched at the mask of the first ‘Gaza – Edinburgh’ twinning initiative – the ‘Take My Hand’ charity. What I uncovered tells you all that you need to know about how dangerous, foolish, and irresponsible the whole twinning motion is.

The charity called ‘Take My Hand’ is Gaza based. It also has clear ties to both Islamic Jihad and Hamas. Gregson is currently running their campaign in the UK and people are donating money to them. Pete Gregson is the Scottish Based ‘Honorary Director’.

This is the whole ‘Take My Hand’ team, Pete Gregson, and two of the Almadhoun clan in Gaza, Mohammed and Sameh. The Almadhouns are cousins. 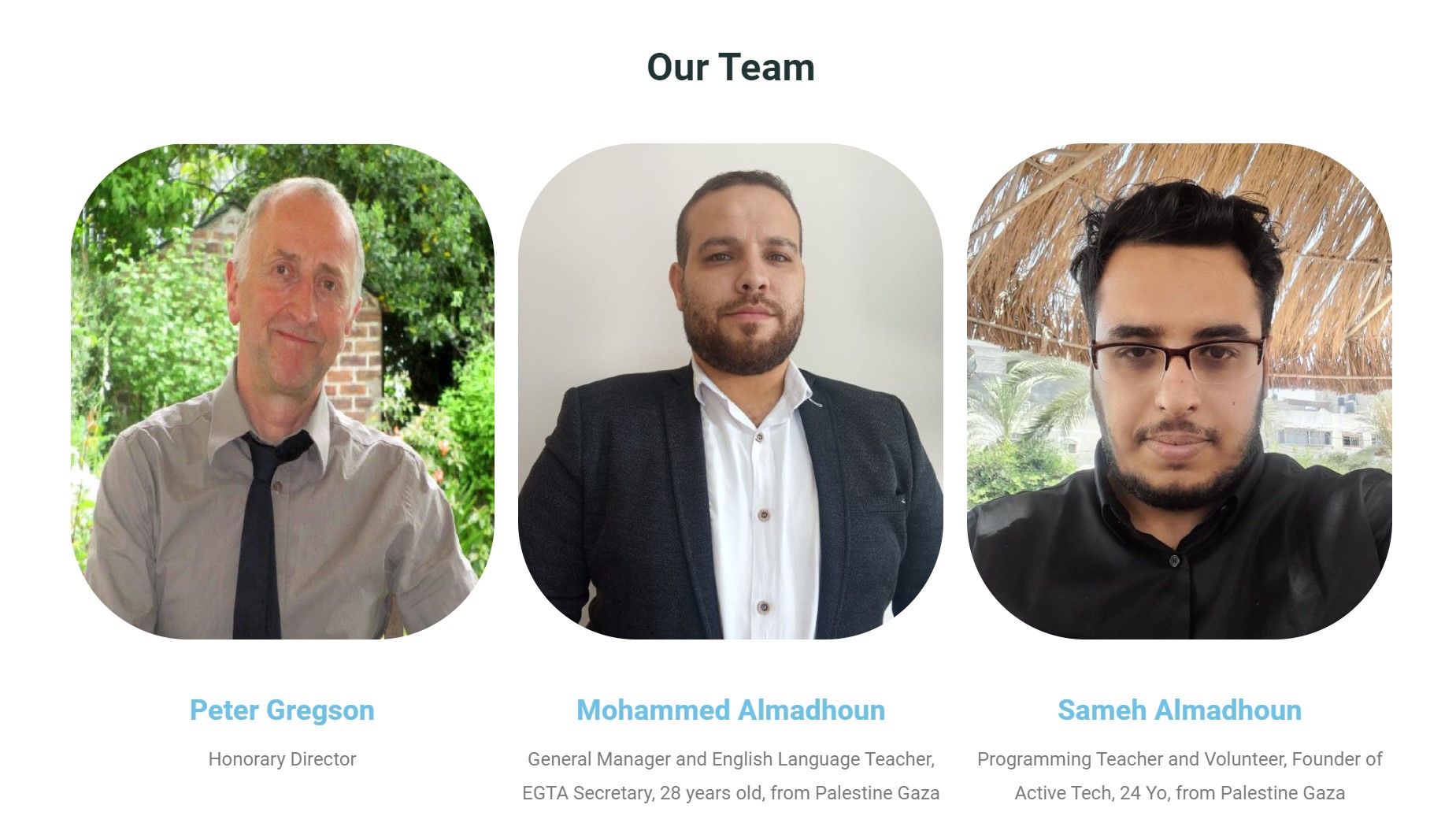 The charity without a history

Gregson claims that Mohammed Almadhoun started running the charity in 2017 but after extensive searching (in both English and Arabic) I found little physical evidence that it existed before their recent campaign started. The ‘office’ address links to an exclusive new office building in an affluent part of Gaza City – far away from any refugee camp. The website was created just a few days ago. The Facebook, YouTube, Instagram, and Twitter accounts are all new and have no followers.

The images of distressed children that Gregson posted on the campaign website appear to have been swiped from Palestinian news broadcasts. This following image (left), which appears on the Take My Hand donation page, first appears (right) in a news item on the page of a Hamas mouthpiece, ‘Palestine Today’:

All the images of distressed children on the donation page seem to have been similarly ‘swiped’. The only original photos on the site are of children having fun. The children are happy, well-dressed, and looking healthy. There are pictures of them studying – each has a laptop. Other pictures have them in well-furnished offices, at the Zoo, or at the beach. It looks like a choreographed photoshoot that has nothing to do with those really in need in Gaza.

Another problem. Mohammed Almadhoun’s own Facebook page never seems to mention the charity or his work there. Nor are there any images on his page of his work at the ‘volunteer’ school. In other words, apart from images used by the three to ask for donations – nothing seems to exist.

Some of Gregson’s begging campaigns are just odd. The first was to save Mohammed Almadhoun from jail because of debts related to dentist work on the ‘orphan children’:

Soothsayer abilities aside, Mohammed Almadhoun is from a wealthy family with close ties to the Hamas leadership. There is no way he was going to jail for £516. What makes it even more concerning was the official ‘receipt’ the campaign posted as evidence that Mohammed had paid the fine. Nothing that comes out of Gaza – even (especially) official looking documents – is to be trusted, but it shows Almadhoun can produce official looking documents at will.

And whilst the Almadhouns ask people to donate money to help feed the children, or keep Mohammed out of jail – they have enough money to waste on multiple t-shirts, to use in support of the Edinburgh / Gaza twinning campaign: The whole scenario reeks of a scam – of being a ‘Pallywood‘ photoshoot.

Digging deep, and reverse searching the ‘Take My Hand‘ logo, there was some history to be found.

Almadhoun created another YouTube channel in the name of ‘Take My Hand‘ in 2018. There are just three videos. One sent me to a ‘GazaHands‘ Facebook page that no longer exists. There was also a link to a PayPal donation page under the username of ‘takemyhand87‘. Here I found Mohammed, but this time he was spelling his name with the hyphen ‘Al-Madhoun’.

The PayPal username led me to a Facebook page called ‘Free Educational Centre‘ that he started in November 2019 and ran for 14 months. From the Facebook page I was led to his fundraising account on the FundRazr crowdfunding platform.

Here he went by the name ‘Mohammed Aalhmad‘ and amongst other campaigns, he wanted people to help rebuild his house which he claimed the Israelis had bombed. Of course, the image he used for the campaign of his destroyed house (left), was swiped from news websites (right):

Oddly, none of the news about his destroyed house was shared on his Facebook page. I then found he had another FundRazr account under the name ‘Take My Hands‘. This time, in one of the campaigns, he wanted help with paying for his back surgery: 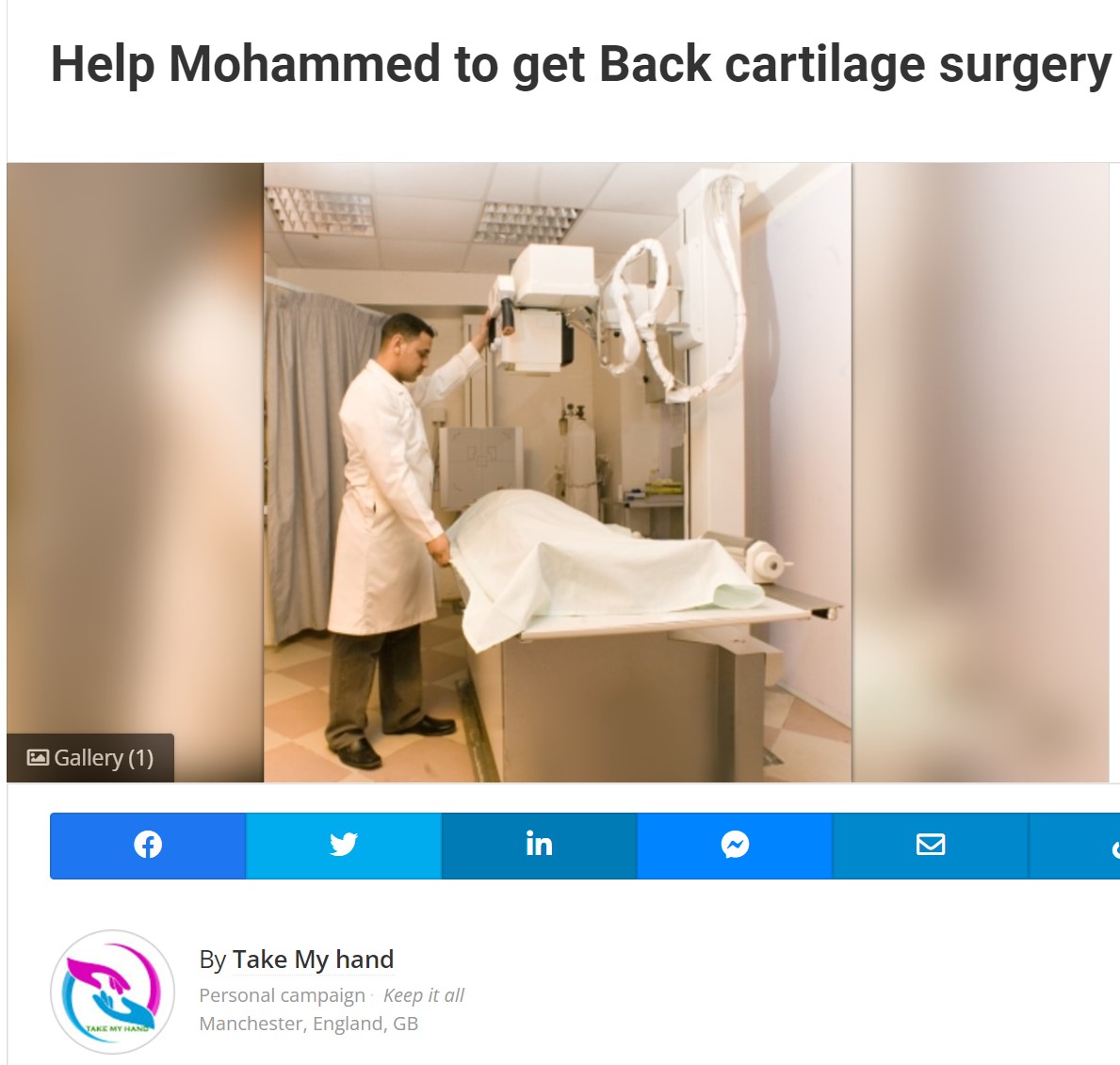 And we are not done. There was yet another FundRazr account with mutiple campaigns to uncover – under the name ‘Mohammed Al-Madhoun‘. Here I learnt that the ‘Take My Hand’ centre itself had also been bombed and needed repair. This time Almadhoun went even further afield to steal his image. His educational centre (left) is actually a school in Syria (right) – bombed during the civil war:

At this point, it was obvious to me what I was dealing with – and I stopped looking any further.

All Mohammed Almadhoun needed was an absolute idiot, a target of galactic stupidity, to help legitimise his scams. How lucky he was to find Pete Gregson and the Edinburgh Council as such willing partners.

The Lord of Rimal

With a homebase in a Hamas enclave, a common name, and a suspiciously new Facebook account, it is difficult finding out real background information about Mohammed Almadhoun. But I have been doing this a long time and even careful people sometimes do things that give themselves away.

Facebook ‘likes’ are a funny thing. It is true that many people ‘like’ international brands, musicians, politicians, and football teams – but some have a habit of also ‘liking’ local businesses that they use. Almadhoun is not a serial ‘liker’ and he has only clicked ‘like’ on 65 Facebook pages. Because of this, Mohammed Almadhoun’s Facebook ‘likes’ can tell us a story.

These are some of the local businesses he ‘liked’:

It is all about small businesses in the Rimal District (and a fair amount of moving money around). There is *no* concentration of likes outside of the Rimal District, and none that have anything to do with Jabaliya – or any other camp in Gaza.

Mohammed Almadhoun clearly lives his life in Rimal. The Rimal District is considered to be one of the most affluent and exclusive neighbourhoods in Gaza (1,2,3,4,5). It is also where many of the Hamas leaders live.

This man took money from the people of Scotland because he told them he would go to jail over a £500 debt.

Like his bombed house, his broken back, and the burnt out school – it is all just more poppycock.

I wrote previously about how the Almadhoun cousins recently lost a family member who was an active Islamic Jihad terrorist. This image below of the terrorist proudly carrying deadly weapons was posted by Sameh Almadhoun (from ‘Take My Hand‘) – and liked and commented on with praise by the Secretary of the Edi-Gaza twinning campaign – Mohammed Almadhoun: 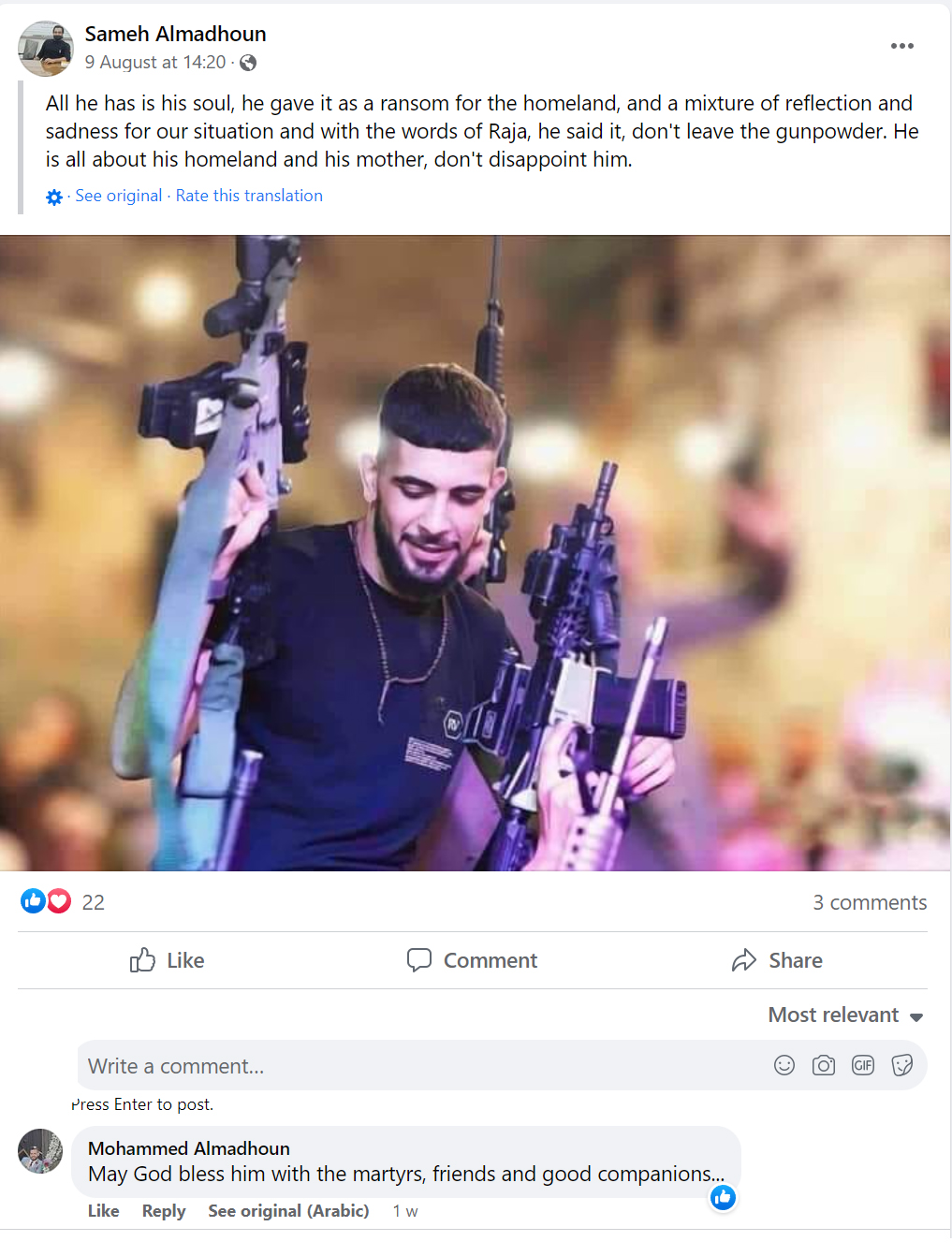 That was followed by this next extraordinary post. It is loaded with information. Posted by Sameh Almadhoun, it is a repost of a statement by the immediate family of the Islamic Jihad terrorist. The post explicitly thanks the proscribed terrorist group Islamic Jihad. The post also gives thanks to a leading member of Hamas, Dr Muhammad Al-Madhoun – and calls him the ‘head of the family’. Mohammed Almadhoun both liked it and commented on it. 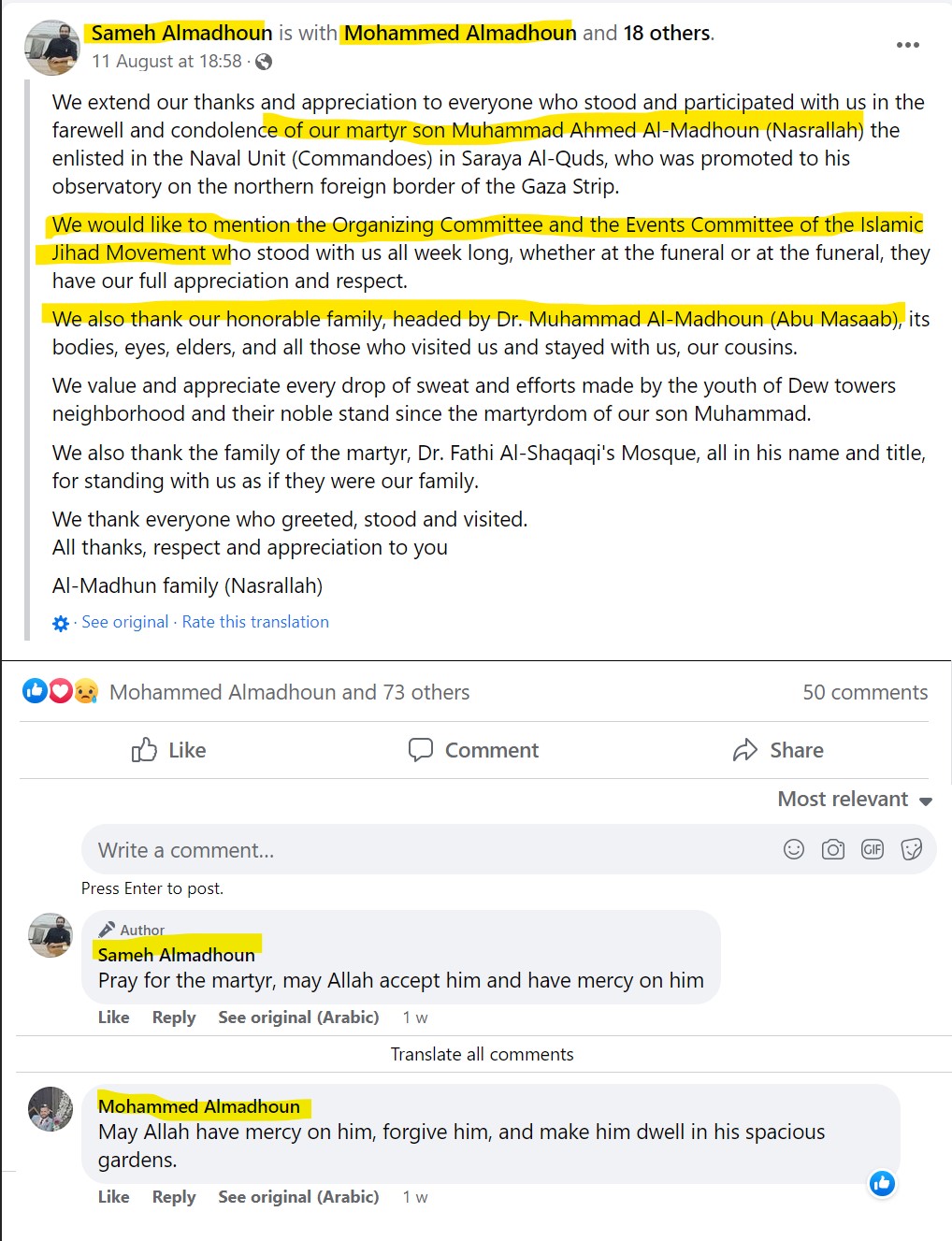 With or without the involvement of the terror groups, there is absolutely no intention here to suggest that Pete Gregson is aware of, or knowingly involved in the scam. Gregson is far from intelligent and has been completely blinded by his hatred and antisemitism. Given his belief that the evil Jews permanently residing in his head are inherently capable of any monstrous deed, my guess is Gregson would believe any nonsense he is fed.

But the fact remains, Pete Gregson is actively trying to raise money from people in the UK to send to the Almadhouns. As the ‘save Mohammed from Jail’ campaign was successful – we can assume some money has already been sent.

Maybe the police or security services should be looking at this?

A word with the councillors

This is a Facebook post from the Secretary of the Twinning Association. Note the personalisation and his use of ‘our‘ and ‘we’ll‘. Simply by debating the motion you have legitimised the voice of Islamic Jihad and Hamas in Edinburgh. *YOU* gave this scamming terrorist supporter a voice and told the people of your city to listen to him. That’s on you.

Wanting to twin with a municipality controlled by Hamas is dangerous folly that will *inevitably* lead to people in the city funding or supporting terrorist groups, or at best – just innocently falling for scams. UKLFI wrote twice (letter 1, letter 2) to the council informing the council members of the legal perils of ‘twinning’ with a terrorist entity. Yet here you are.

It is irresponsibility of the highest order to even consider sending this type of ‘green light’ to people in Scotland. And what kind of message does it send to those who want peace – that Edinburgh aligns with those who openly call for the murder of Jews?

(I have uploaded a page containing the emails of the councillors – please write to them and let them know how you feel).