Two things are key to my outlook – truth and historicity. Being driven by a need for honesty however, does mean that I am not so big on being ‘politically correct’. I believe that following such an ‘unchained’ strategy exposes the weaknesses of the anti-Israel propaganda machine far better than other, more ‘diplomatic’ methods.

So on Sunday I put out a simple, factual tweet. I accept that it was the type of tweet that some of my more dovish supporters cringe at. They likely consider it provocative and unnecessary. I believe that challenging the pillars holding up the fake narrative of our enemies is vital work, even if now and again I make others around me feel uncomfortable.

This is what I said:

There is nothing factually wrong in those words. It is a simple statement that reflects part of the historical reality behind the conflict. ‘Palestine’ as a term was just a reflection of the Christian heritage of the colonial powers, For over 1000 years it was a word that meant ‘Holy Land’ to those in Europe that used it. It was alien, not native, to the region. The ‘Palestinians’ just did not exist in the Arab world in any sense whatsoever.

None of this is about ‘people’ today, nor their rights, so there is nothing to get angry with. Except the anti-Israel narrative exists upon pillars of falsehoods. Which means it has to reject rather than accept the truth. So the simple tweet went viral, with about 350,000 ‘impressions’. Over 785 people commented on it.

And this is how the anti-Israel propaganda machine responded:

When told the truth – most just become abusive:

The key response was just sticking their fingers in their ears and screaming ‘racist’:

There is obviously nothing racist in my tweet at all. These people do not like what I am saying but have no way of actually countering the facts. Using their favourite smear – ‘racist’ – is all they are left with.

Those comments above were just some of the 100s of abusive tweets. Apart from calling me a ‘racist’, I was also called an ‘Islamophobe’, a ‘Nazi’, a bigot, and various curse-words than I have no intention of repeating here. Verbal abuse was by far the most popular response.

Another response was simply the good old fascist deplatforming. Mass reporting in an attempt to have the tweet removed, or better yet, have my account suspended. This from Corbynite Chloe Schlosberg (partner of Justin), just one of many who appear to want to censor truth:

My inbox was full of notifications from Twitter about my tweet being reported – in several different languages. It is the type of organised mass-reporting storm that the hard-left use to bring down accounts on FB or Twitter. But even Twitter realised that my tweet did not cross any lines. Everyone who reported it, was simply told that it did not break the rules:

Look here is a picture of …

Aside from abuse and attempts at censorship, the other main response was from people who know very little but love to act as online parrots. Those who think they have the answers because they have seen them used elsewhere. This mainly involved sharing a photo that ‘proved’ that I was wrong and showed that ‘Palestine’ had indeed existed. We have all seen them – coins, banknotes, letters – with the word ‘Palestine’ written on them. Except of course every single one of them comes from the British Mandate period. These were British coins or banknotes, and they even carried the lettering for ‘Eretz Israel’ (the Land of Israel) on them.

It cannot be said often enough. The only people who considered the ‘Holy Land’ to be ‘Palestine’ were the Western Christian colonial powers. And they had ‘Palestine’ etched into their heritage because of earlier Roman rule (another European Imperial power) that had given rise to the spread of Christianity. And the Roman and Greek notion was itself based on the other European invaders – the Philistines – who had long since disappeared from history.

For over 1000 years – the term ‘Palestine’ survived in the west as part of a romantic religious heritage. It was for this reason – and this reason alone – that the British used the name ‘Palestine’ for the Mandate. So when the colonial powers drew their maps between 1916 and 1923 *THEY* got to decide what would be inside Palestine and what would not. It had nothing to do with the ethnic make-up, heritage, culture, language or history of the Arabs or Jews living in the region. The ‘ancient Palestine’ that all the haters want to ‘free’ is nothing more than a recent colonial construct.

I will post the funniest of these images here, because it literally says it is a British Passport: 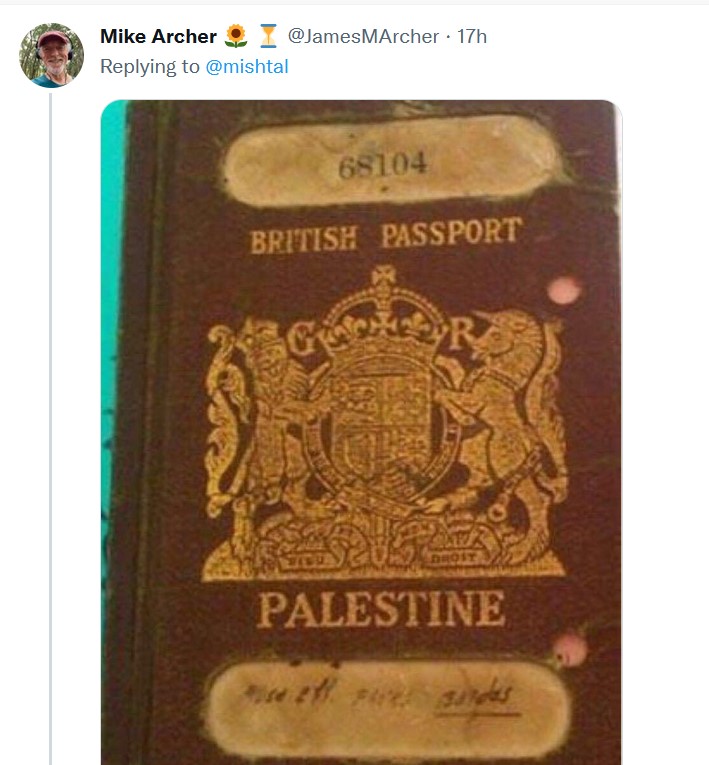 And here is a map

Many other responses were part of the same pattern. Tweets containing maps of the area that included ‘Palestine’: 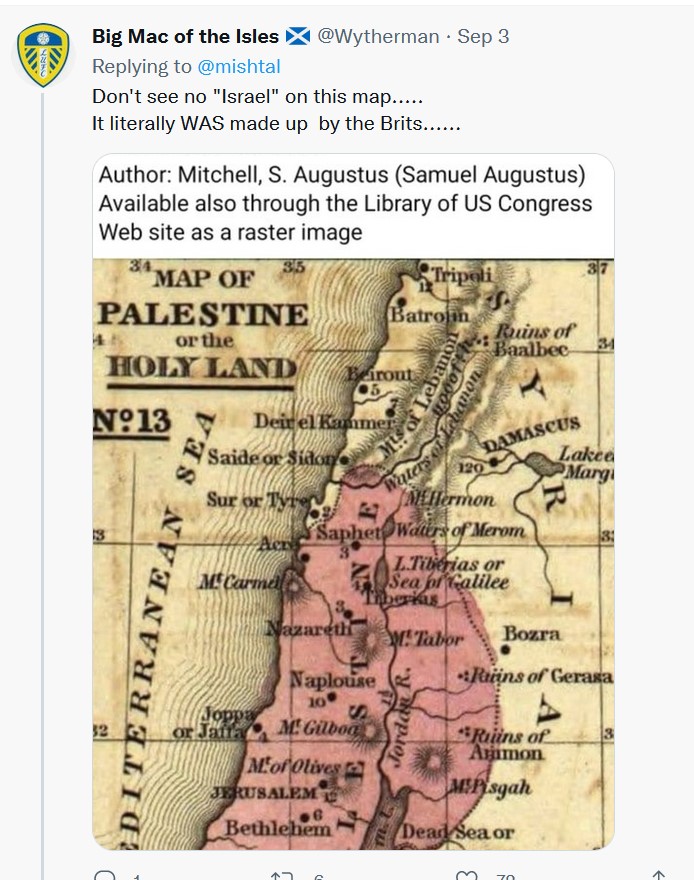 Drawn in the west throughout the ages, there is a real irony in holding them up today. In essence they were drawn by Christians who often saw the world (and ownership of it) through Christian, colonial, white supremacist, eyes. Mitchell Samuel Augustus, who drew this map in 1839, prefaced books with suggestions that he sought “to illustrate the excellence of the Christian religion”. The real map of the region looked nothing like this at the time, and the empire that controlled the region (the Ottomans) had no ‘Palestine’ on their maps. Once again we are facing nothing but a colonial construct built from the romantic imagination of white Christian, not local Arab heritage. They think this is their proof?

The truth and more complex pictures

The more carefully crafted positions – of which there were just a few – tried to suggest that these ‘markers’ that I used were colonial in origin. This is irrelevant, non-factual distraction. For example, some suggested the same could be said of the Native Americans. Except that is totally false. The Native Americans had their own turf – their own currencies – their own languages, cultures, rulers, and religions. They also had distinct histories. This argument is not about the western concept of statehood. And attaching the word ‘colonial’ to Jews in Judea and Samaria is patently absurd. Never in all of history has any ‘colonial invader’ ever been able to dig down into the earth – to uncover their own people’s history in the ruins they find. It just does not work that way.

The Palestinians as a people never existed. They were at best, bits and pieces from everywhere living under the Ottoman roof. And there were not many of them either. Mass immigrations in the 19th century, as Egyptians moved in and the Ottoman Empire began to collapse inwards, saw the population begin to explode. The flood became a tsunami as the Europeans increased their interest in the region and Zionist investment began to make some areas prosper. It is the height of hypocrisy to suggest the Zionist who arrived in 1880 was an invader – but the Bosnian Muslim who moved there for the work the Zionist created – is somehow the one who really owns the land.

You have to admire the strategy. The notion of the indigenous people of ‘Palestine’ conquered the western world despite it having nothing to do with the Arab world, or Islam. It was in fact the easiest of sells. The Muslim world – which was itself a product of imperial conquest – never had considered Palestine a thing – but suddenly saw value in suggesting it was real. The Christian west just swallowed it whole – because in their dreams – the ‘Holy Land’ had always been ‘Palestine’. They even had it on all their maps. It was a fictional marriage made in heaven.

Truth should not hurt or be ignored. Because much of the Palestinian narrative was created to deliberately perpetuate the conflict and undermine Jewish history, it forms an environment where the two sides cannot co-exist. This is partly the reason the conflict appears never-ending. Therefore, learning the truth becomes a vital component in fully understanding the dynamics, and helps pave the way to a viable solution.

This is not a denial of people’s rights today. It is a suggestion that fake history has made the conflict unsolvable. It leaves the Palestinians pushing maximalist positions and rejectionism rather than seeking accomodation. It means many in the west, who have fallen for the fake narrative – support the Palestinian intransigence.

To borrow from the very Christian heritage that is relied upon to perpetuate the myth of an ancient ‘Palestine’, I will end with this from John 8:32: ‘Vēritās līberābit vōs’ – the truth will set you free.

Help me fight extremism and antisemitism

My research is unique and hard hitting. It also does depend on community support.

I battle back against those who seek to revise history, demonise Israel –  and I expose antisemitism wherever it is found. I fight when and where others do not. The results speak for themselves and for eight years I have been exposing hate and creating headlines.