In this bombshell exclusive, I expose Na’amod, the self-proclaimed ‘anti-occupation’ UK Jewish group for ‘freedom, equality and justice for all‘ as dishonest, dangerous extremists.

Not only did Na’amod provide resources and help extremist Holocaust denier Pete Gregson with a ‘bogus antisemitism’ tour featuring Neturei Karta and the Muslim Brotherhood-linked Hamas terrorism defender, Azzam Tamimi. When caught in the act, Na’amod issued a blanket denial, smearing me their accuser as ‘far-right‘ and ‘pro-occupation‘. But I can now reveal email evidence, proving the full, shocking extent of their lies, and their willing endangerment of the Jewish community.

The full story below:

Formed in 2018, Na’amod presents itself as a caring UK Jewish ‘anti-occupation‘ group striving for freedom for all. In truth, they are fringe of a fringe extremists, born out of a split from Yachad due to a horrific and widely-condemned event that saw Jewish people saying Kaddish for Hamas terrorists in London’s Parliament Square. Na’amod portrays itself as a student group – and certainly target Jewish students in their activism – but in reality most of those driving Na’amod are much older. Na’amod claim to be diverse in their views on Zionism, but accuse the mainstream UK Jewish community of immoral support for the occupation, and anti-Palestinian racism simply for expressing any perspective that is not a simple blanket condemnation of Israel. While they claim to be concerned about the human rights of both Israelis and Palestinians and proudly vaunt values of honesty and courage, in practice, everything about Na’amod suggests they are not what they pretend to be. And their support for, and malicious coverup of their contact with, infamous antisemite and Holocaust denier, Pete Gregson, proves it beyond a doubt.

Pete Gregson is a notorious antisemite and Holocaust denier, who has ties to a an Islamic Jihad-linked bogus charity. A Khazar conspiracy theorist who claims ‘Zionists are not Jews’, proven to have said the Holocaust was ‘exaggerated’ and exposed by Hope Not Hate and CST as part of Holocaust denial group, Keep Talking, Gregson has been expelled from the Labour Party, GMB union and virtually every Left-wing group possible for his antisemitism – and even hard-core anti-Zionists have distanced themselves from him. In short, Gregson is an obsessive enemy of the Jewish community.

In February 2022, Gregson set up a campaign about ‘bogus antisemitism’ which I began to investigate undercover. He started planning a tour of the UK to push this clearly antisemitic message, platforming two extremist figures: Dovid Weiss of Neturei Karta and Azzam Tamimi. Weiss previously attended a Holocaust denial conference in Tehran, and is friendly with the Iranian regime and Hezbollah. Azzam Tamimi is a leading figure of the Muslim Brotherhood, and supporter of Hamas in London who has said “I take pride in being a terrorist…I long to be a martyr.”.

This tour could not get more toxic if it tried. No right-minded Jewish organisation would have anything to do with it.

During my undercover stint investigating Gregson’s tour, I found Gregson claiming that Na’amod had helped him in organising the tour, including sending him an Excel file full of venues. I received enough solid evidence to suggest it was true, but not enough to be 100% certain.

I sent Na’amod an email outlining the accusation with a right to reply. Even I found it difficult to believe they would have got into bed with someone as infamously and publicly toxic as Gregson. When Na’amod did not respond to me, I tweeted out about the email exchange. Na’amod’s response was quick, hard and clear; it never happened and I was making it up. 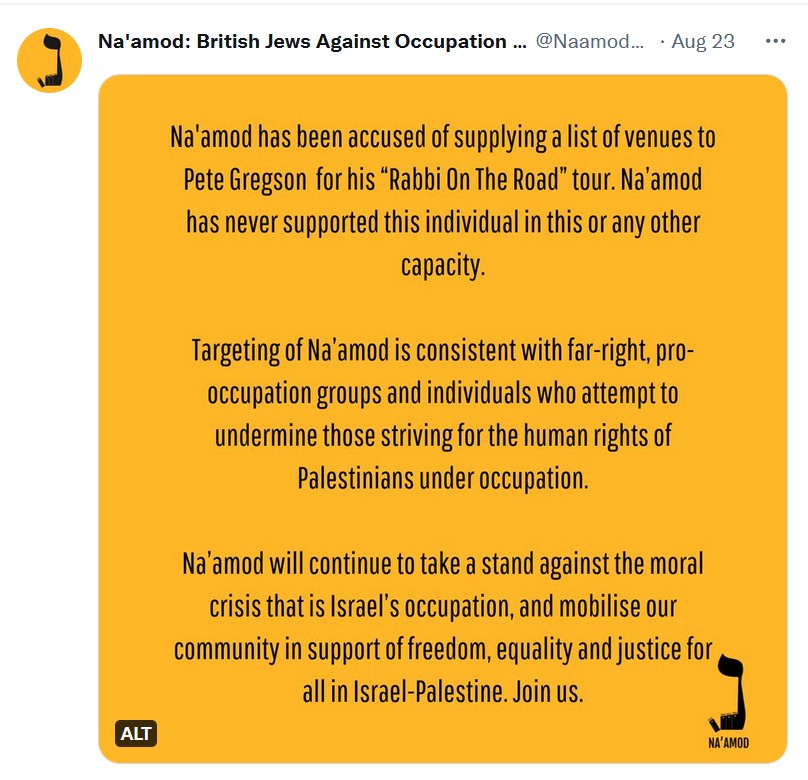 The statement is crystal clear, with no room for doubt. They say they have never supported Gregson in this or any other capacity. They imply I am making it up, referring to me as ‘far-right‘ and clearly cast doubt on my honesty as a journalist.

Public repudiation and threats to sue

On Facebook, the Na’amod hierarchy and several of their fans, got involved in a discussion about the options of suing me because I had apparently ‘defamed them‘: 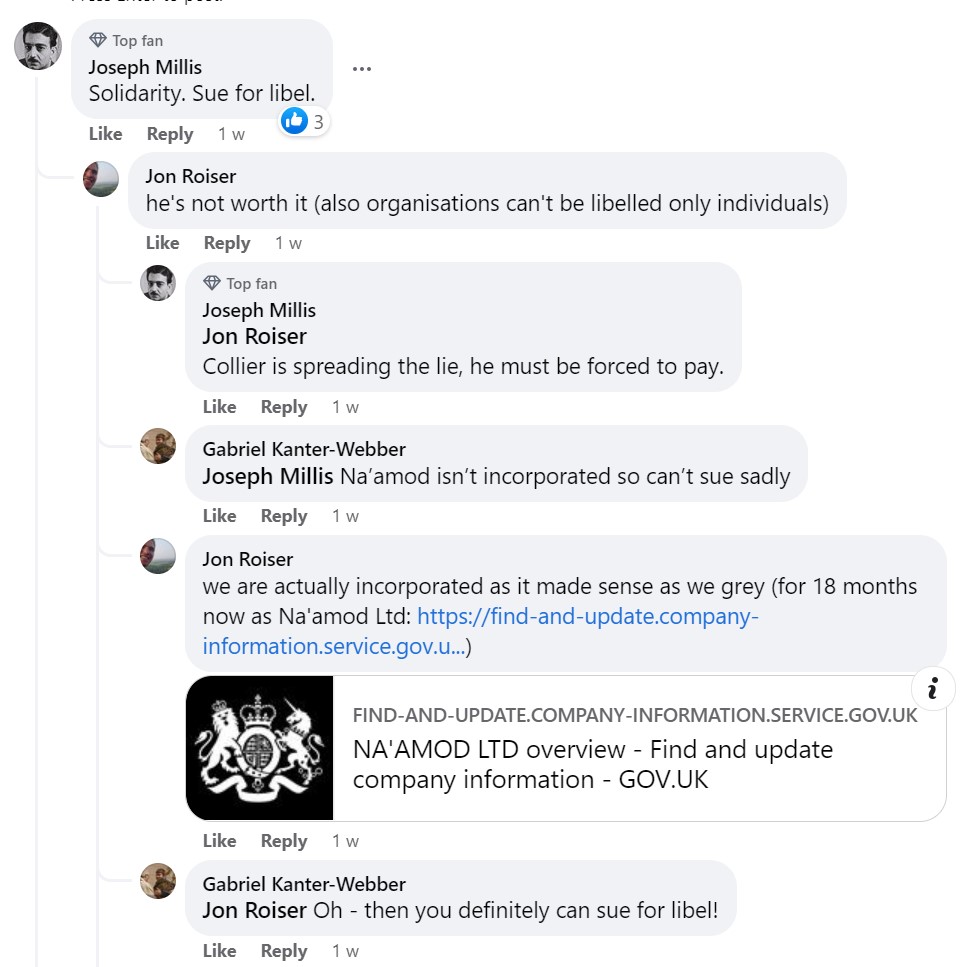 Many of those that came out in support of Na’amod by liking or commenting on their statement of denial are well-known names on the supposedly ‘progressive Zionist’ Jewish circuit.

On top of those in the list above were Na’amod’s leading figures such as Jon and Anna Roiser, both present at Kaddish for Hamas. Also note the clear Yachad / Na’amod crossover. Most of these people frequently attack Jewish mainstream organisations as well as activists that have been prominent in fighting against antisemitism.

So, Na’amod denied they had supported Gregson in any way.

Except I can reveal today that Na’amod were not telling the truth. I can now publish the actual email exchange that took place between them.

As follows in full: 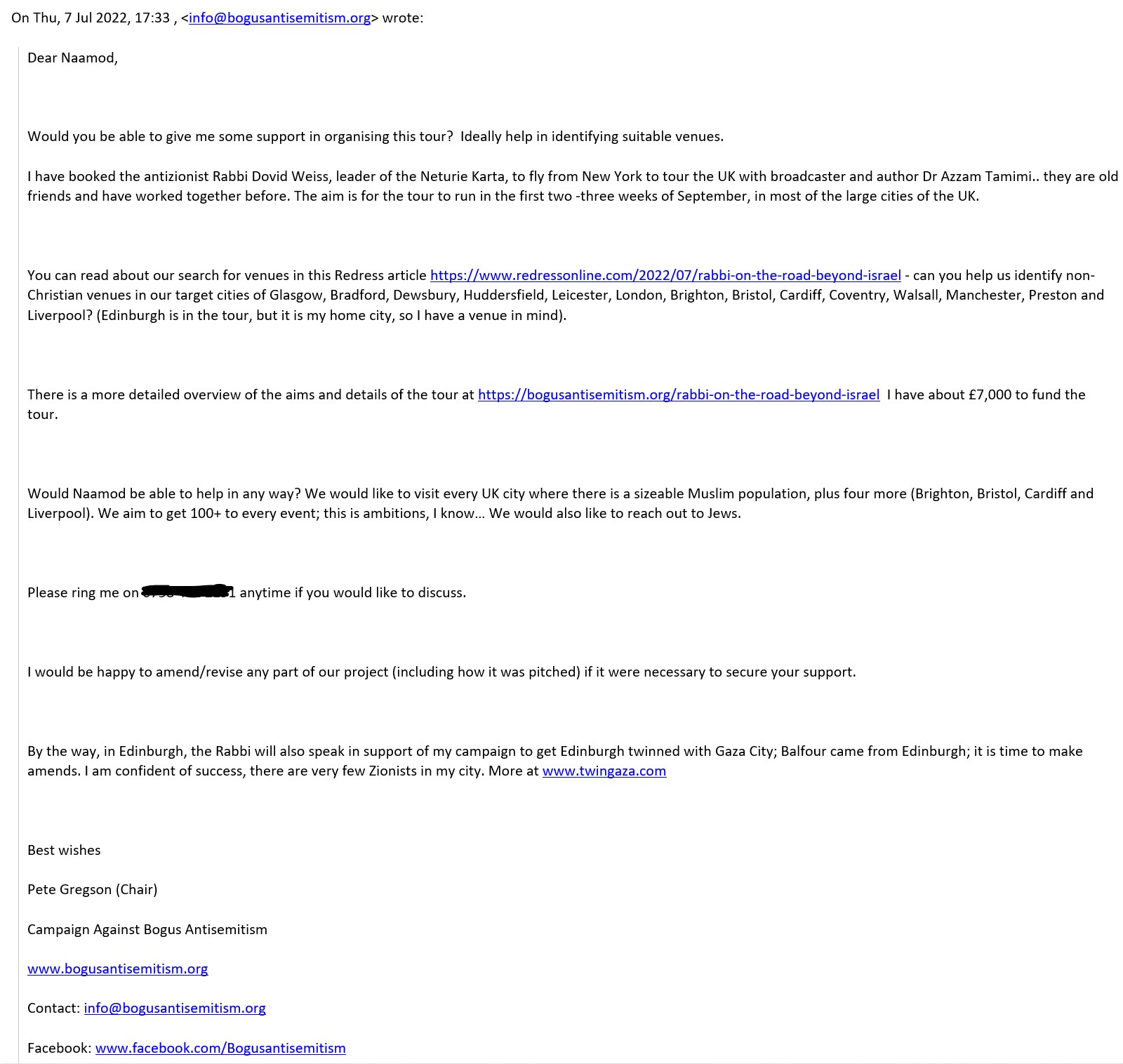 Gregson’s email is clear. He is open about who he is, which organisation he represents, what he is doing and who he is doing it with. The email he uses is even ‘info@bogusantisemitism.org‘. He asks for Na’amod’s help.

The response Na’amod sent in reply is shocking in the extreme. The excel file of venues that they provided can be seen as an attachment. They tell Gregson that ‘it sounds really good‘. They ask if they can do anything else to help. And they end, ‘in solidarity‘.

To be clear. What I received is not a forwarded email (and therefore editable). What I have in my possession is the actual email that Gregson received from Na’amod – sent to me as an untouched attachment.  Which means the original headers and metadata is all intact. This clearly shows that the email was sent from the official Na’amod account to Gregson:

I have uploaded images of both the full email exchange and the full hidden email headers. The only two redactions:

This leaves no doubt that Na’amod did help Gregson with his tour plans AND then lied about it in their official statement – smearing my name and my professional reputation in the process – all in order to cover up the help they had given a toxic antisemite and Holocaust denier.

This is not a question of differing political views. Na’amod have been caught secretly helping a notorious antisemitic Holocaust denier with his terrorist-linked, ‘bogus antisemitism’ tour. They even provided him with their own ‘mega sheet’ of venues to help him – wished him well and asked if they could do more. And then, even more damningly they lied about it all – smearing the journalist who had uncovered the truth.

Are these the British Jewish values Na’amod are so proud to hide behind?

Na’amod is an extremist organisation. But over the last few years, Na’amod has slowly become part of the community’s furniture, taking part at Limmud, and even gaining a foothold at ‘Jewish News‘ through a Yachad-sympathetic journalist.

This is aggravated because Na’amod and Yachad activists are often one and the same (as I outlined above). The deeply fringe part of the spectrum they exist within demands it because there really isn’t space for two separate groups since – despite their insistence – British Jews are not far right, extremist uncritical supporters of Israel. We are a moderate community. On the street, Na’amod tread where Yachad do not dare – while Yachad gain entry onto platforms that Na’amod cannot enter. I once described Na’amod as the militant arm of Yachad. I believe this even more strongly now.

This has to stop – and it is time the community realised just what is taking place behind closed doors. Na’amod – and all those who associate with them – should be as unwelcome under the community umbrella as Kahane Chai, Neturei Karta or Jewish Voice for Labour. And despite their masquerading as student-led, the truth is those pulling the strings are not students – and Na’amod operates almost as an entryist organisation designed to turn our children away from any form of Zionism whatsoever.

Na’amod’s actions with Pete Gregson have clearly placed them in the ‘dangerous’ category. There is no excusing this. Nobody should have anything to do with them – and any organisation that does – should also be tarnished. Parents should let youth groups know that they will lose their support if Na’amod activists are given a platform.

Na’amod are in bed with our enemies – it is time this was fully recognised, and everyone acted accordingly.

Help to fight extremism and antisemitism

Please help to support me if you can. Either with a single amount, or if possible, a small monthly payment. My research is unique and hard hitting. Nobody else is doing what I am doing but all this does depend on community support.

I battle back against those who seek to revise history, demonise Israel –  and I expose antisemitism wherever it is found. I fight when and where others do not. The results speak for themselves and for eight years I have been exposing hate and creating headlines.