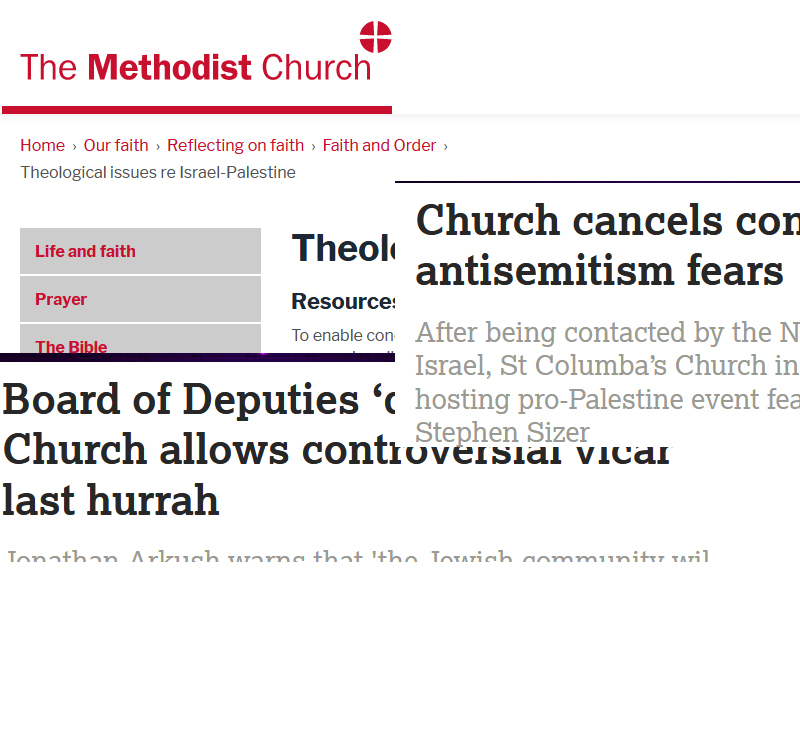 The Methodist Church, the fourth largest Christian Church in Britain, are actively promoting an antisemitic conspiracy theorist as one of their key readings on the subject of Israel.

There are six thousand Methodist churches and a total membership of approximately 330,000 people. Globally the community number 70 million. My own experiences with the Methodist Church have been far from comforting. Anti-Israel propaganda events at Hinde Street and the Marlborough Road Methodist Church spring to mind. The Methodist Church even called for a partial boycott of Israel as early as 2010.

At Hinde Street in 2016 I spoke to someone connected to their toxic exhibition. She told me that Church based organisations have funds to send people on organised trips (propaganda tours) and as part of the agreement for the subsidised trip, they must organise ‘x’ number of events of their own upon their brainwashed return.

This type of activity turns the ‘Palestinian cause’ into a church-backed growing missionary movement – one that seeks to create new disciples and ‘spread the anti-Zionist word’ into new regions. As most discussion within the Church expressing sympathy towards Israel is silenced or at best met with deep hostility – this is one sided radicalising discourse that will only lead to an even more hostile atmosphere.

Antisemitism in the Methodist Church

There is no way of addressing Church based attitudes towards Israel, without drawing on 2000 years of Christian persecution of Jews. Of course, the Methodist Church is not 2000 years old, having arisen in 18th-century Britain following the reformation 200 years earlier.

Antisemitism was embedded deep in the roots of the reformation movement. In 1537 Martin Luther wrote ‘On the Jews and Their Lies’ – a 65,000-word attack, urging persecution of the Jews. 400 years later, that book would be waved around by the Nazis.

In turn, it was whilst listening to a reading from Luther at Aldersgate in London, that Wesley had the spiritual experience that would lead to the creation of the Methodist Church. Wesley was another outspoken antisemite:

“What stupidity, what senselessness must it be for such an unclean, guilty helpless worm as this [the Jew], to dream of seeking acceptance by his own righteousness, of living by the righteousness which is of the law!’” – John Wesley

We only have one geographical location where Nazi Germany and British Methodists sat together under a single umbrella – the Channel Islands during the 5-year occupation. Perhaps tellingly, the collaborator who handed the names of the island’s Jews over to the Nazis was the Rev John Leale, a local Methodist minister.

We came a long way in 2000 years. From the vile accusation of deicide to the Holocaust.

Without embarking on a major theological exercise, the core issue remains the relationship between the old and new testaments. The complexities that the truth creates – that Jesus was a Jew, born in Judea, who delivered his message to Jews – demanded a painful divorce. Early attempts at differentiation, particularly by Paul, were a vital part of the success of the Christian church. If god had made all these promises to the Jews – what place for a new Church – unless those promises could be transferred. Substitution – replacement – supersessionism.

Blanket antisemitism and periods of violent oppression characterise Christianity’s historical attitude towards Jews. 2000 years of ‘teaching of contempt and the supersessionism that declared the Jewish faith inferior and outmoded‘- created the perfect landscape for the Holocaust.

In its pure form, replacement ideology is inherently dangerous and hostile to Jews. More to the point, supersessionists, Christians who still consider Jews inferior, deserving of god’s punishment and following an outmoded religion – tend to be antisemites. Leading supersessionists gravitate towards anti-Israel activism like moths to a flame. For the true supersessionist – Jews are inferior and Zionism is a clear ideological threat.

In some ways Luther’s early attitude towards Jews (before he wanted to burn synagogues and expel Jews from the country), is mirrored in a supersessionists anti-Zionism. Luther thought badly of Jews, but Jews could convert and save themselves. For a Jew not to be persecuted – he merely needed to accept the truth as Christians were selling it. For a Jew to be considered worthy today – he must do the same with the anti-Zionist. Listen to a supersessionist discuss the ‘evils of Zionism’ and then read Martin Luther on the Jews. The similarities are unsettling.

After the Holocaust, churches embarked upon a ‘learning curve about their ‘culpable failure‘ and the contributions Christianity had made to the furnaces of Auschwitz. Things did change for the better. It is what makes witnessing antisemitism inside a modern church so painful. I have often referred to my experiences with Christian antisemitism as being the most difficult to digest. Christians should have learnt, Christians should know better.

What are the Methodist Church doing to battle back against this growing tide of supersessionist ‘anti-Zionism’? Not much it seems. In fact, beyond voting to boycott Israel and encouraging people to go and be brainwashed on propaganda tours, they are actively promoting antisemitic conspiracy theorists on their website.

The Methodist Church has a page of ‘resources for studying theological issues relating to Israel-Palestine’ on their official website. In other words, this is the Church telling its faithful what particular thinking on this issue should guide them. And here we run into real trouble. Stephen Sizer is on the list.

How on earth can the Methodist Church justify telling believers that one of the key people to listen to when asking theological questions about Israel – is a man who faced restrictions from the Church of England because he kept sharing material from antisemitic hate websites?

It almost goes without saying Stephen Sizer is a member of the antisemitic FB group ‘Palestine Live‘. He was one of the first members, added to the group by Elleanne Green on the day she created it. Over six years later, on 4th February 2020 he is still liking Elleanne Green’s posts:

My criticism is not just about what Sizer shared. It is about where his beliefs find comfort. He swims in the dark websites that those in my research live inside. He gets and shares ideas from toxic conspiratorial hate sites such as the Ugly Truth and Veterans Today. Sizer attends meetings such as the one the PRC held at Westminster, where antisemitic hate frequently bubbles to the surface to remain unchallenged. Sizer’s attitudes are clearly clouded by prejudice. NOBODY should listen to this man on the subject of Jews and yet his thoughts are officially promoted by the Methodist Church.

Someone more familiar with the different theological positions should have a look at the list recommended by the Methodist Church. Naim Ateek, the founder of Sabeel is listed and there are other links to condemnations of Christian Zionism – so perhaps the inclusion of Sizer should not be so surprising.

The list is provided by the ‘Faith and Order Committee’. The Secretary is Nicola Price-Tebbutt. The committee meets every few months and if decisions need to be taken during this period, then the’ Executive’ which comprises of Price-Tebbutt, the Chair and two other committee members, make the call.

What is most ironic about a renewal of hostility against Jews from within the Methodist Church is that it takes place as – outside of Israel – Christianity is erased throughout the Middle East. Open Doors, an NGO that supports persecuted Christians, records that the hostility towards Christians is mainly down to Islamic persecution. The YMCA in Gaza has been attacked several times. The Christmas tree in Gaza is no longer placed in a public square but rather behind fences, to protect it from attack.

The problems extend beyond Gaza. In the West Bank, Muslim converts to Christianity will be attacked and even killed by their own family. Last year a Christian woman was assaulted in her village – she complained to the police and in response her village was attacked by Fatah gunmen. In two seperate incidents there were attacks on churches in Ramallah and Bethlehem.

The number of Christians tragically is still declining. Christians can run, they can convert to Islam or they can be persecuted – these are the options open to them. Only in Israel and to some degree in Lebanon are things different. There are 3x as many Christians living in Israel than there are in the West Bank or Gaza. Israel’s Christian population is growing and is by far the freest Christian community in the entire region. In some parts of the region, Christian groups have faced genocide.

Which is why Sizer and those like him are clearly being driven by something other than faith, logic or truth. Interfaith is a two-way street. Jewish people cannot sit idly and accept that the Methodist Church is actively promoting hate. The rise of antisemitism follows decades of complacency. Is it any coincidence that those like Sizer promoted Jeremy Corbyn?

Nothing should be as easy as modern Christian support for Jewish life in Israel. If inter-faith has any meaning whatsoever, then it should be the duty of the Churches – including the Methodist Church – to make sure that message is the one they spread the loudest. Promoting boycotts, spreading hate and giving a platform to a conspiracy theorist – is not the best way to build bridges.