I recently purchased a book titled ‘The Jewish Hand in the World Wars‘. A 169-page sewer of raw antisemitic hatred that describes how ‘Jewish duplicity, deception, belligerence and naked self-interest’ along with their ‘significant influence’ drove the world to wars for Jewish gain. You would think that a book full of such blatant antisemitism – from turning historical events into Jewish led false flags through to a denial of the Holocaust – would only be available for purchase on twisted neo-Nazi websites. You would be wrong – this book was purchased on Amazon. It appears that Amazon actually stock the book in their Hemel Hempstead warehouse. Just like Twitter and Facebook, Amazon is helping to spread raw Jewish hatred.

The book makes every vile accusation possible against the Jews – inciting hate – and promoting that people act against them. In its conclusion the author writes:

“What shall we do? The path forward is quite narrow as Hitler understood. If we are to have any hope of minimizing future wars, we must stay the Jewish hand. Jews must be identified, isolated, sanctioned and removed from positions of power….In two short decades, an uneducated Austrian artist developed an unprecedented vision of national greatness, defeated the potent Jewish Lobby that for so long had ruled his nation, and guided his people to the heights of power. It happened once before. The blueprint still exists. It could happen again.”

For the good of humanity this book suggests that people act against the Jews.

The Amazon book of pure hatred

The book begins by explaining that the Jews have always been ‘trouble-makers, agitators and warmongers‘. Jews are ‘liars and deceivers’. Jews ‘deceive, exploit and kill in order to achieve their ends‘. Just like the Nazi ideology of the ‘uneducated Austrian’ that the author admires, this book’s anti-Jewish hatred is a descendant of the anti-Judaic treatise of  Martin Luther. According to the book, the ‘overriding strategy‘ of the Jews is to ‘find people in distress and profit from their suffering‘.

The sickening story that unfolds is an exercise in antisemitic poison. In typical conspiratorial strategy the author produces a memo to underscore a point, leaving behind the 999 memos that negate his argument. The power of a particular person is exaggerated because he is Jewish, whilst the non-Jews that surrounded him are covered in invisible ink. It is easy to distort history. Ten thousand politicians, millions of quotes – and if you just pick the ones that suit you, you can create anything you want to. In this book almost everything is the Jews fault and 100 million die – to save or create Jewish power and wealth.

One Jewish person having the experience of reading this was enough. I have no intention of sharing more of the sewer here. It is enough to say this is probably the most sickening contemporary writing I have had the misfortune to read. On my bookshelf I have ‘Mein Kampf’, ‘the Protocols of the Elders of Zion’ and Luther’s ‘On Jews and their Lies’. This books venom sits comfortably amongst them.

The author of this book calls himself Dr Thomas Dalton Phd. Dalton suddenly turns up in 2009 on sites such as the neo-Nazi  ‘Occidental Observer’ (original article NSFW). along with his then new book ‘Debating the Holocaust’. From the internet archive it seems as if the book was published in early 2009.

Dalton claims he is a ‘Dr’, has a PhD, and is a ‘professor of humanities at a major American university’ – but nobody knew who he was in 2009 and people still do not know who he is today. It appears to be a pen name, which means everything claimed about his academic background may or may not be true. As he is a Holocaust denier and rabid antisemite – it is fair to say we can take anything he says with bucketloads of salt. During once exchange he seems to claim he was at the University of Arizona but the real Thomas Dalton there is not the author of these books.

‘Dalton’ has written several books and Jews are the object of hate in almost all of them. Several are available for sale on Amazon.

The book is published by Castle Hill Publishing. They claim to have several ‘branches’ in the UK but there is no physical address. Their postcode, TN22 9AW, leads to a PO Box at a Royal Mail depot in Uckfield. When I say ‘their postcode’ – I found no other use of this postcode by anyone else, anywhere, ever.

Castle Hill Publishers was founded in early 1998 in the English town of Hastings by Germar Rudolf, a Holocaust denier who has since spent time in jail in Germany. Rudolf left for America and Castle Hill seems to have moved from Hastings to its ‘special’ address in Uckfield. There were two connected websites, vho.org and tapd.org, although the latter seems to have been added after Rudolf had already left for the United States. At some point in 2013, Castle Hill, joined forces with the Committee for Open Debate on the Holocaust (CODOH). and its current website is no more than a recently registered puppet website that also carries the CODOH name.

If you try to buy something, they try to convince you to pay CODOH rather than Castle Hill. 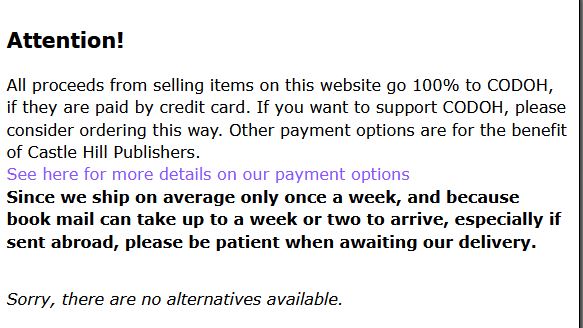 Try to pay in the UK and you are instructed to make out a cheque to Castle Hill ‘Services’ rather than ‘Publishers’ and to send it to their PO Box. ‘Castle Hill Services’ is the name they use in the US.

I think it is fair to assume that Castle Hill Publishers never really had a firm UK presence once Germar Rudolf left. They all have a social media presence. CODOH have a Twitter account – certainly there is an account operating in its name. So do Castle Hill Publishers. There are also Facebook pages for both.

These websites are sewers of hate. CODOH was created by the former media director of the Institute for Historical Review. The books they publish under the mask of ‘revisionism’ are no more than the blatant denial of those like Bradley Smith, Germar Rudolf and Thomas Dalton. For me this type of research is always the most difficult and sickening. The book I have just read shows that the problem is getting worse.

As the internet changed our lives for ever, hate that was hiding in the shadows exploded back into mainstream life. We all see objectionable material on our social media timelines. When we complain – we face an argument of free speech – this is a massive straw man.

I highly doubt that Amazon permit their brand to be soiled with books that promote ISIS. The words ‘circumcise’ and ‘women’ when placed together in Amazon’s search box – does not produce results instructing people how to carry out FGM. Thomas Dalton encourages people to act against Jews. The work is not historically important or a research-justifiable addition to a bookshelf. The book does nothing but spread hate and Amazon are profiting by it. Profit is the only reason Amazon permit these books on their website. This isn’t about ‘free’ anything.

Amazon is a commercial company, not a government. It has no citizens and no duty to permit absolute freedom. Facebook and Twitter are two similar outlets. Antisemitism is on the rise and it is dangerous. It is time they all stop spreading it on their platforms. How do with think the problem is being spread?

Amazon must not legitimise hate

This isn’t a casual argument. We can see the rise of extremism and hate on our streets – and it logical to assume that the ease of access the internet provides plays no small part. I have a master’s degree in ethics. These companies boast about social responsibility but how can Amazon claim to care about social responsibility at all – if it is distributing material that calls for Jews to be ‘identified, isolated, sanctioned and removed from positions of power’ and in which people are called on to follow Hitler’s ‘blueprint’.

Amazon have dealt with Holocaust material before. We complain, they take minor action and carry on as normal. They have already flagged and removed Holocaust denial material from the Castle Hill Publishers. So how can the author sell a book from a publishing house they already know should be blacklisted?

It is not enough just to remove this book

I searched other Holocaust-denying authors, there are dozens if not hundreds of books and other Holocaust denial publications sold on Amazon.  I am Jewish and I should not be able to see a book on Amazon that calls for another Holocaust of Jews. No one’s free speech should stretch that far.

A top hotel in London will not knowingly permit its brand to be tarnished by letting its venue be used by hate speakers. Waterstones are unlikely to want to stock hate material on its shelves. The brand is vulnerable. Amazon get away with it because they have no fear. Nobody is suggesting that these people are not allowed to find a sewer to swim in somewhere. Cigarettes are out there – but are sold behind closed doors and come with a warning. Selling hate through a top name brand – legitimises it and increases its circulation. As a society we cannot look at the rise of extremism and hate and simply ignore it. If organisations such as Amazon cannot be responsible out of choice, they need to be forced to take responsibility.

It is not enough just to remove the book from their listing. Amazon are selling a Nazi ‘call to arms’ and delegating the war on antisemitism and extremism to the very minority being targeted. ‘If’ we find it, ‘if’ we see it, then we pressure them to act. This is not good enough. Amazon are one of the richest organisations on the planet – they can afford to ensure they are not spreading hatred. It is their duty – not ours.