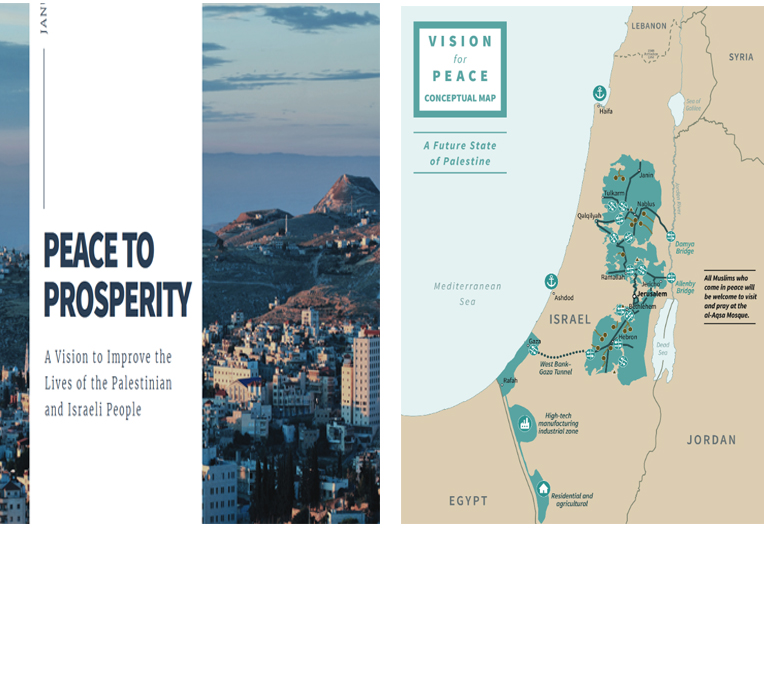 Trumps vision: knocking the Palestinian cause off its perch

For two days now, there have been a stream of articles calling Trumps ‘peace plan’ everything from a conspiracy to Apartheid. Quite a few of the ‘predictable’ politicians from the UK and US have bitterly attacked the initiative. Judging by Emily Thornberry’s comments in parliament it seems that many of them are unlikely to even have read the American ‘vision’ before calling those involved with it – ‘racist’. My guess is that 95% of those who have spoken on it – haven’t read it – or if they have – know nothing about earlier agreements.

It is not a peace plan

I have read it three times now. During the second I made notes, and these were used to seek clarification during the third reading. This is not an article where I will be waving it above my head singing its praises – far from it. I found some elements troublesome and there are areas where the ‘vision’ was not clear. There isn’t clarity because this isn’t a comprehensive peace plan – it is a vision statement.

Much of the same

Nor is the vision statement 181 pages long. You reach the appendix on page 39 and only a small part of the appendix is relevant. From page 54 until the end there are just pages of economic and investment promises. Having read it thoroughly I can say that much of the noise coming out of the anti-Israel camp would still be heard whatever was written inside. A lot of the criticism is ‘content irrelevant’.

The most glaring issue I have with most (not all) of those that are complaining – is that they clearly do not know what they are talking about. Much of the content is the same as it was before. The Oslo process that was so loudly applauded in the west provided ‘peace offers’ that were not so different – and from an economic perspective were far less attractive.

In Thornberry’s speech for example – she berates the fact Israeli settlements will remain in Israel. Duh! If she or anyone else thinks that the 1967 borders have *EVER* been on the table, she is not just deluding herself but helping to perpetuate a conflict on false ideas and empty promises.

Thornberry also goes on to glorify and extol Yitzhak Rabin. The assassinated ‘messiah’ of the Islamo-Marxist alliance. Why do I call him a ‘Messiah’? Because what he was in life, what he believed and what he wanted – have absolutely nothing to do with the man political opportunists have turned him into. This is part of his final speech to the Knesset (Oct 5 1995):

‘We would like this to be an entity which is less than a state, and which will independently run the lives of the Palestinians under its authority. The borders of the State of Israel, during the permanent solution, will be beyond the lines which existed before the Six Day War. We will not return to the 4 June 1967 lines.’

‘First and foremost, united Jerusalem, which will include both Ma’ale Adumim and Givat Ze’ev — as the capital of Israel, under Israeli sovereignty, while preserving the rights of the members of the other faiths, Christianity and Islam, to freedom of access and freedom of worship in their holy places, according to the customs of their faiths.’

On the eastern border:

‘The security border of the State of Israel will be located in the Jordan Valley, in the broadest meaning of that term.’

So my question to Thornberry would be this – what is it about Rabin you agree with so much? He is not offering full statehood, is clear that most of the settlements would remain and that Israel would look after its own border with Jordan.

Israel has never offered the 1967 borders and the Palestinians will never receive what we in the west consider all the trappings of statehood – without going through generational trust building periods first. But on the core issues – the largest settlements will remain, the ‘right of return’ will be sorted externally (to Israel), the Jordanian border will be under Israeli control and Jerusalem is and will be the capital of Israel – there has been no movement.

Everyone who applauded Rabin and thanked Obama have accepted all this already. So what’s the problem?

Taken off their perch

Primarily the opposition is anti-Trump. This is certainly true in the US during an election year but also counts for much of the noise coming from Europe. Trump is the devil, Netanyahu is the devil, therefore the plan – whatever it offers – is the work of devils. But what is also fundamentally true about opposition from the west reflects that this ‘vision’ is a correction of the narrative.

For decades, Arab states, the Soviet Union and the ‘non-aligned nations’ placed the Palestinians on a perch. They honoured them and worshipped them as a way to either attack or distance themselves from Jews (the arab world) and the west (everyone else). The truth is that the Palestinians have fallen far since the heady days of the 1970s. The Soviet Union has collapsed – and the US and Russia even have growing strategic alliances. The Arab league for the most part wants nothing more than the opening of borders and trade with Israel.

Ironically – beyond the Islamo-Marxist alliance, all that is still holding the Palestinian cause afloat are western romanticists – who still refuse to accept they were sold a dud and are worshipping nothing more than an emperer who clearly has never been dressed at all.

The Arabs lost the war of 1948/9. Truth be told that is when the conflict should have ended. The ‘two state solution’ was perfectly made. What followed was not about ‘two-states’ but a rejection of it. Rather than create a ‘Palestinian state’, the Arabs CHOSE to build an unsolvable puzzle. They fought and lost again – and again – and again.

The Trump ‘vision’ is a generous offer to a losing side. The perch upon which the Palestinians were placed left them falsely regarded as ‘equal partners’. There is nothing equal about this. Whilst every human being must be regarded as equal – narratives and national demands have no such luxury. The Palestinians are a losing side in a war that they themselves started. They were unfortunate in that geo-political-religious arguments were to turn them into political pawns for decades – and left them believing much of their own hype- but surely now the time has come to end this farce.

Stealing words from Alex Fegurson as the Manchester United manager – the Trump proposal knocks the Palestinian cause *off its f**king perch*.

The vision allows Israel to move forward with or without the Palestinian agreement. Israel can and will take the fundamental pillars of Oslo – settlement blocks – the Jordan valley – with or without Palestinian agreement. Geo-political changes have removed the emperer’s clothes. It has left the ‘western left’ out of sync with much of the Middle East and the rest of the world. The Arab states want this problem over. In truth – both Egypt and Jordan would prefer Israel on their borders. In fact, only the Islamist trouble-makers – Pakistan, Iran, Hezbollah and so on – are looking to perpetuate this conflict further – and this is because of religious extremist rather than humanitarian ideologies.

There is much in the ‘vision’ to agree with. Unlike Oslo it doesn’t try to pretend the larger disagreements are not there (which was the prime failing of Oslo). It correctly places Israeli security in a primary position. If Hamas and Israel were ever to sit around the table, then ‘new Hamas’ would rise. Unless the suicidal and self-destructive elements of radical Islamic terrorism are built into an agreement – everyone would lose in the long term.

The vision notes that refugees have ‘been treated as pawns on the broader Middle East chessboard’. The Palestinian refugees no longer exist as such. Their descendants are embedded firmly into every economy where they live. What is required is for Syria and Lebanon to just flick the switch – stop abusing them – and give them citizenship.

If some want to move to the Palestinian state – then they can. Everywhere else in the world that the descendants still refer to themselves as ‘refugees’ is an insult to real refugees. Compensation? Fine – but we look at the Jewish refugees too.

It demands that that there should be one Palestinian government and that Hamas and Gaza, should be demilitarised. It seeks an end to hostility, incitement and conflict. These are no brainers.

I am sure there are elements that the Palestinians cannot accept – but that is what negotiations are for. They cannot argue if they are not sitting around the table. Is the annexation of some of the more remote settlements unnacceptable? Fine – bring them up in discussions.

To those that oppose it – and are living in comfort in the west – they really need to decide what it is they are opposing – they are not the people who suffer from the perpetual conflict.

The problem for the Palestinians is that non-engagement doesn’t work. And I am speaking as someone with historical knowledge who wants genuine peace – and can visualise a time when the walls between Palestinians and Israelis fall down organically.

The only question we face today is how to build a platform upon which a real future partnership can be built. You don’t start as a doctor – you start in pre-school. If you refuse to enter education until you receive your medical licence – you will remain uneducated- even though education still remains a fundamental human right. On statehood – the Palestinians will never be able to start at the end.

Friends of Palestinians should be screaming this loudly. That historically when the Arabs did not co-operate – they lost. They lost when they didn’t co-operate during the early days of the Mandate. They lost when they refused to engage the UN as it formulated the partition plan. The world is moving on – and Israel has continued to grow and prosper. Talking doesn’t hurt. What ruined Oslo wasn’t the talks – it was the bus bombs.

The ‘vision’ does *EXACTLY* what it says on the tin. It is a clear project to improve the lives the Palestinians (and Israelis). It may not be perfect, but it is certainly something that everyone interested in ending the conflict should take seriously and want the Palestinians to discuss.

This blog is unique and the results speak for themselves. This research has been responsible for 100s of mainstream newspaper articles. I  engage in deep research, much of it undercover, into anti-Jewish hatred, anti-Zionism and anti-western extremism. Your support really does make all this possible. By placing the evidence in such concrete form, this research really does change the narrative. My work is fully independent and this independence is important for the freedom to go where I need to go. I was recently named as one of the J100 (‘top 100 people positively influencing Jewish life’) by The Algemeiner.  If you can, please consider making a donation towards the research.

82 thoughts on “Trumps vision: knocking the Palestinian cause off its perch”