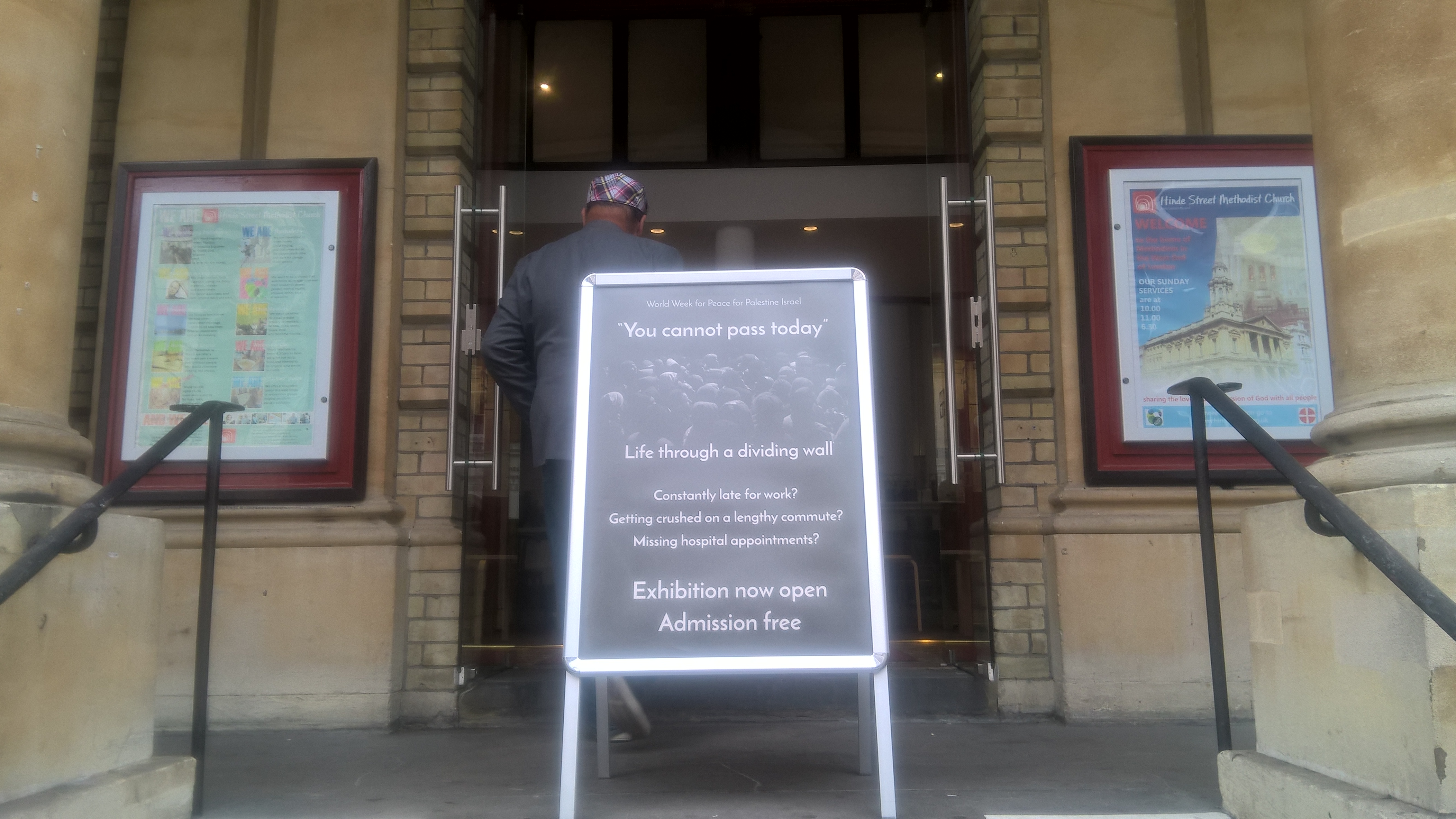 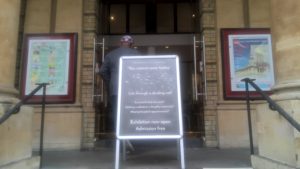 It’s the 19th September 2016. My attention was drawn this week to an exhibit in London at the Hinde Street Methodist Church. An exhibition that seeks to enlighten Londoners about ‘what it is like to cross a checkpoint everyday’.  It is called “You cannot pass today”. It is based on ‘checkpoint 300’, a crossing between Bethlehem and Jerusalem.

Odd really. Even internal European travel can be problematic, and just a few weeks ago I stood for over an hour in a queue at an airport. Not sure what ‘experience’ Londoners are lacking. Borders can be frustrating. We all know that.

Yet Hinde Street Methodist Church decided that it wishes to divert funds from a deserving cause so yet another exhibition against Israel could go ahead.

I was busy preparing for the new academic year. Soon, I will be moving from campus to campus, talking to students, trying to understand the hate. Then Hinde Street knocked on my door. I decided to go and see what they wanted me to learn.

The event apparently is part of the “World Week for Peace in Palestine & Israel”. I found information on this from ‘The Palestine Israel Ecumenical Forum (PIEF)’ which judging from their stated goal of ‘ending the illegal occupation of Palestinian territories’, is just another one sided anti-Israeli movement hiding under the umbrella of a church group.

The information packs are the usual fare. The action card instructs you how to lobby your local MP, begging them to blame Israel.  The section on additional resources lead with Mondoweiss and the Electronic Intifada.  Let’s face it, this is one sided hatred of Israel dressed up in the costume of the local priest.

I have to be fair. This wasn’t an exhibition set up to demonise Jews (Israelis). The photos, the exhibits, the stories did stick to the theme, the apparent hardship experienced by the Arabs. It did however have the quality and feel of a school exhibit. It was small, hardly impressive and failed to hit a target. 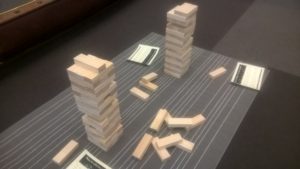 The failure on the part of the organisers to construct a worthwhile exhibition however should not let everyone off the hook. The message may have been badly delivered, but it was still carried in the hands of the Christian church.

Upon entering the Hinde Street Church there was a small temporary 2-meter-tall aisle to the left, that was supposed to resemble an entrance to a checkpoint. The construction had information leaflets you were meant to read as you imagined yourself edging through a crowded border crossing.

There were issues with the messages on display. A poem by Mahmoud Darwish suggested he wrote it in ‘occupied Palestine’. Those who constructed the exhibition may not understand the subtle battles such as these, but one hopes that this was not written whilst he was inside Israel.

Furthermore, there were several ‘eye witness’ statements that were nothing of the sort. If you go somewhere and see something, then you are an eye witness. Almost every single notice on the fence was hearsay, the 3rd party retelling of someone else’s narrative.

And then there were religious quotes. Misplaced, out of context, almost perverse. To top of the distortion and manipulation, there was a symbolic wall with notes on the floor instructing the reader to ‘cleanse’ himself by removing a brick and helping to dismantle the wall. 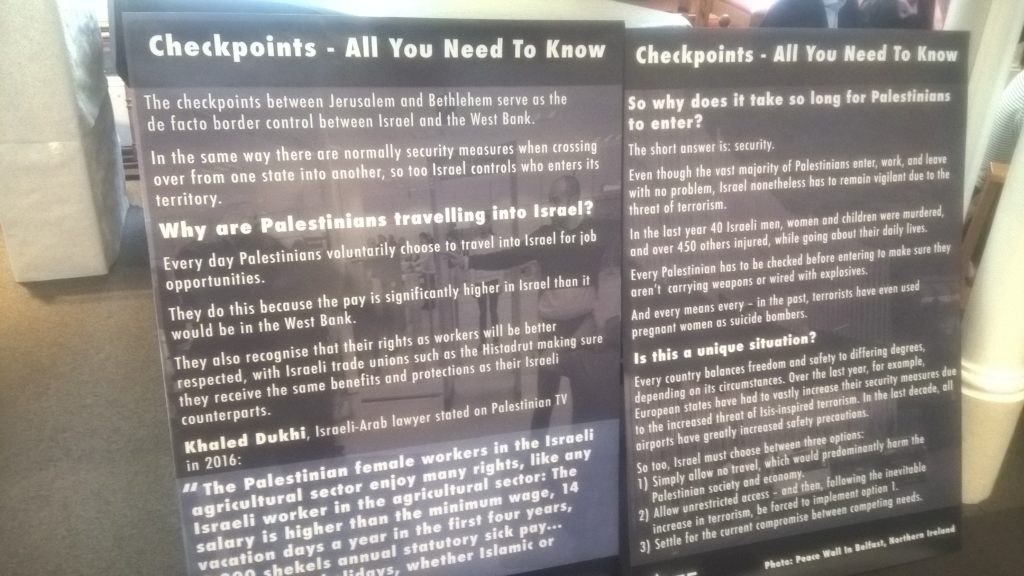 As was pointed out to one of the ministers at the church, Rev Sue Keegan von Allmen, there were no references to violence, and not even a condemnation of violence anywhere in any of the messages. This is the best they could come up with? Raw Palestinian propaganda. Luckily the Zionist Federation had elbowed their way onto church grounds to counter the message.

It isn’t really surprising. The person who put together this event, Katherine Fox, the member of the church who went ‘over’ to be a ‘witness’, is simply a galactically stupid human being.

Unfortunately, I didn’t have the opportunity to discuss the conflict with Katherine, the hall was empty most of the time and Katherine wasn’t there. I did speak to a typical church going ‘pro-Palestinian’ who told me her name was Hilary.

Hilary has been to Bethlehem and was helpful and talkative. I got to hear how Israel is a ‘cruel’ society. How Israeli Arabs are often forced off their lands, how they are scared to travel and how they live in fear. I also got told how Israel kicked the Arabs off the hills in the West Bank so they could build their settlements there. I was given a list of sources to follow up.

I didn’t argue, but I did subtly probe. I always try to find an element in tthe discussion that will hopefully highlight the inconsistency in their own argument.

For Hilary I used ‘the wall’.  Apparently Israel wants to steal all the land, apparently Israel wishes to ‘build settlements’ everywhere. Why then ‘the wall’ I asked. Surely the creation of a wall provides a barrier for Israeli territorial ambitions. The blank look you receive in return, the vocal stumbling, all suggests someone who has swallowed the propaganda whole.

Katherine, like Hilary, no doubt went on a subsidised trip. She was taken everywhere she needed to go and saw everything she needed to see. No further thought was necessary. No reason to question why the wall was built, to consider other barriers and borders across the globe, to understand the history of the conflict. Not for Katherine. In any event, any questions she does have will be dutifully answered by Electronic Intifada.

Katherine ‘knows the truth’. So much so, she persuaded the Hinde Street Methodist church in London to spread the word to others. A vile display that portrays hearsay as eye witness accounts, ignores history, refuses to condemn violence and doesn’t seem to care why the checkpoints were introduced in the first place. Just how much did they waste on this? They have just let down everyone in London. It’s only the 19th September 2016. Already I gain a sense of what lies ahead. It is going to be a long year.

26 thoughts on “Stupidity, The Hinde Street Methodist Church and Israel”