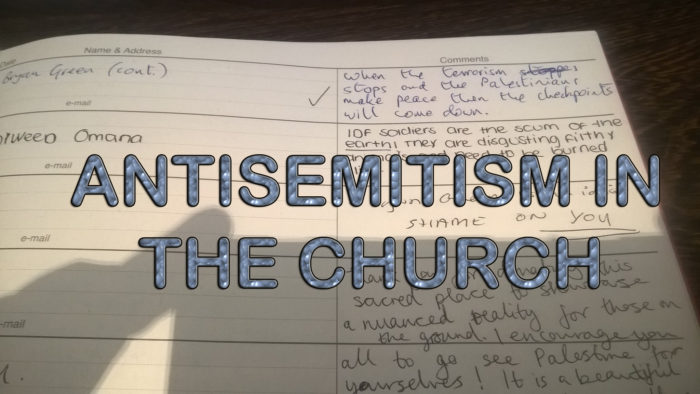 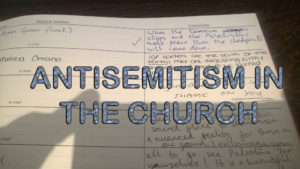 I have been to your church several times this week in an effort to engage with people over the ‘you cannot pass today’ exhibition. The Church decided to use a replica of an Israeli security checkpoint to deliver a message about ‘bringing down walls’.

Last night I was also at the circle discussion, that spoke about building bridges between the communities. I always try to reach out, try to understand. My learning process doesn’t include vocally arguing my case, but rather engaging and listening to others, absorbing their message (without confrontation) and trying to build a picture of what it is I see.  There are three central points I would like now to get across:

The exhibition came about because one of the people involved with the church, Katherine Fox, had recently returned from a three-month humanitarian mission in Bethlehem.

Katherine did not go to Somalia, Iraq, Syria, Afghanistan nor Libya. The reason she did not go to these places is because it is generally too dangerous and there is no similar industry to any of these life threatening areas. Only inside Israel does this type of tourism occur. It is safe to view the humanitarian situation in Israel precisely because it does not involve the dangers that exist elsewhere. I have written on this subject before.

If you had listened to Katherine speak last night, you would hear she was instructed to propagate the information. To return from the safari park and record events as if she had been into a jungle. It is part of the process, part of the industry. You get to go, provided on your return, you hold ‘x’ number of events that perpetuate the myths and convert others to the cause.

You also only get to see what they want you to see. You are on a journey with a clearly laid out path. If for example Katherine had spent three months in Ramallah, she’d be wondering what all the fuss is about . These trips are well choreographed.  Your hand is held from the time you arrive to the time you leave.

So the question then becomes, is ‘bringing down the wall’, a message of peace or one of war. Is the church assisting those who seek a peaceful solution, or inadvertently helping to perpetuate a conflict, assisting in spreading the hatred?

The greatest straw man of all

The entire discussion always circles around one single straw man argument.  Some suggest that the attack on Israel is dripping with antisemitism, and the offended humanitarians argue in response that they are not antisemitic.

I am absolutely certain you have heard and used these arguments yourselves. It is in fact the central argument in defence of your exhibition. Surely criticising Israel isn’t antisemitism and yes, it should be possible to hold Israel up for analysis. So let us be clear, I have never met a single Israeli or Jew who suggests that criticising Israel is antisemitism. This is a massive straw man argument. Please do not use it as a defence. As with everything else connected with the ‘Jew’, minds become cloudy, so let us leave Judaism behind.

Arresting a black man is not racism.  But as statistics are revealed about how black youth are unfairly targeted, arrested, treated or searched, something clearly needs to be addressed within the community. We are aware today that racism in society and institutionalised racism within the system, play a major part in the story.

So to become lost in the defence that criticism of Israel is not antisemitism is to use the basic defence of the racists. I am certain some black people are criminals. You cannot possibly look around at the ridiculous coverage this particular conflict receives and not understand that something is out of sync. And the industry that exists, that sends people such as Katherine as ‘’witness’, just where does it get its support, just where is the funding coming from? What is its true aim? Why are there not similar efforts elsewhere? Why is Israel the ‘black family’ everyone is pointing at?

It is of course institutionalised antisemitism, and everything that emerges from it is part of a product of that Jew hating system. This includes that vile exhibition that is currently on display in your church, and is spread innocently in the message Katherine was instructed to disseminate upon her return.

There is no way the Methodist Church would align itself with racists who defend institutionalised racism against members of the black community. So why does it do it with the Jews?

I know all about building bridges. I personally spent much of the 1990’s inside cities such as Nablus, Jericho, Ramallah and yes of course Bethlehem.  I worked on cross border projects to help both communities. I was there long before the barrier. In fact, I was on a tour of some of these towns, just a few days before the deliberate explosion of bloody violence they were to call the second intifada.

If I could transport you back in time to Ramallah in September 2000, you would ask the same question I ask myself every day. Why did they throw it away? For the answer is surely the same regardless of which period of time you look at, which of the many rejected peace offers you choose to analyse.

There are simply enough people on the other side of that checkpoint who want to kill Jews and who refuse to accommodate a Jewish presence behind any borders.

It seems odd then that these checkpoints should become the focus of your exhibition. As defenceless Christian communities are slaughtered throughout the Middle East, you choose to waste church funds on highlighting issues with a method the Jewish people have found, that protects them from a similar slaughter.

The IDF are a civilian based army. For the vast majority of Israelis, the IDF represent our children.  So the message inside the guest book of your Hinde Street Church that read the IDF are ‘animals’, that need to be ‘burned alive’ is a personal and shocking attack on all British Jews. 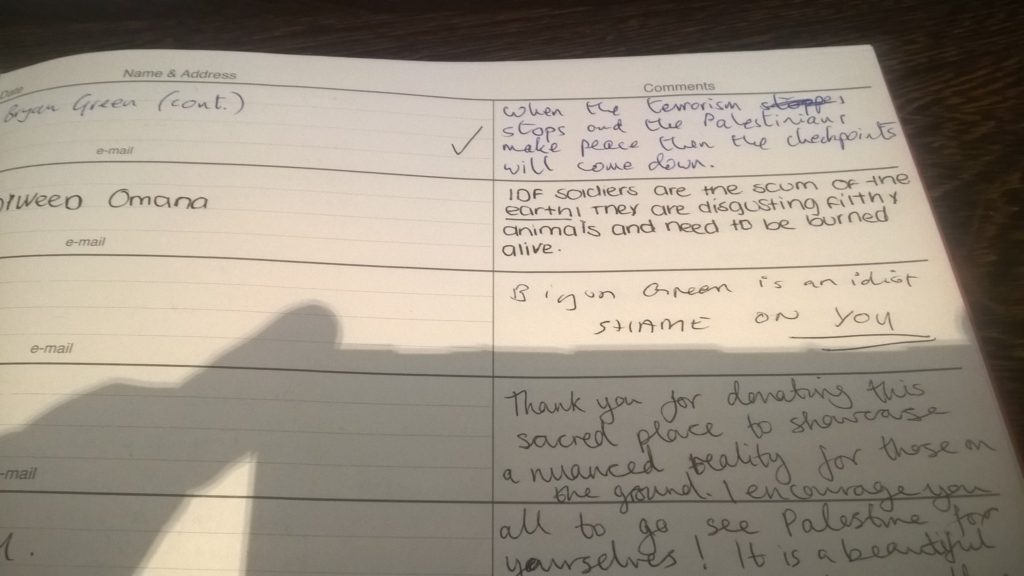 This is a call for members of *my family* to be ‘burned alive’, that I saw inside your church. It is this hate that you invited into your church and fed with misrepresentation and distortion. All supplied by an industry of institutionalised antisemitism. You then ask how to build bridges between our communities!

The efforts of any Christian church should be about how to make peace, not how to bring down walls that protect innocent civilians. The Berlin Wall did not fall because West Germany pulled it down, but because the East Germans ended the conflict.

Perhaps engaging with Palestinian Arabs, working with those that seek peace and fighting to side-line those that continually bring violence to the table. To fight against those that blew up the buses as Israelis opened their cities during the Oslo period. A word of warning though: That effort would not be a safe safari park effort. It carries a serious health warning.  There are some truly nasty ideologies on the other side of that checkpoint.

One can only wonder, how it was that the church looked around at events in Europe, looked at the rising antisemitism in the UK, the attacks on our Jewish community and actually thought that placing that checkpoint inside the church would be a good idea. Just last week my own 14 year old daughter saw vile antisemitic graffiti covering a bus stop on her way to school.

Unfortunately, having listened at the gathering last night, the central message has still not been understood by the church. When you speak of building bridges, in reality you are asking how to carry on doing what you are doing whilst still having a relationship with us.

You are in short asking us to accommodate institutionalised antisemitism and accept being targeted. So let me state clearly what I am sure our Jewish leadership will be unable to voice with any clarity. We reject, we oppose, we refuse. Those days are over.

Please if you can, also consider making a donation. Research is expensive and time consuming. Simply producing just one of these piece does take days, sometimes weeks, and whilst I do what I can, there are serious constraints that impact on what is possible.

8 thoughts on “Hinde Street #antisemitism in the Methodist Church”