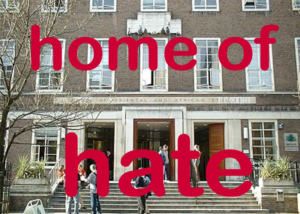 Its 27th September 2016. Summer is over and the new academic year begins. Across the country, political activists such as those in the SOAS Palestinian society hold ‘freshmen’ sessions to attract new recruits to their cause. Everyone knows SOAS is important to BDS and Palestinian activism. When you walk into SOAS you enter the BDS UK student stronghold. But I am used to being inside the SOAS halls now. The atmosphere and venomous tone no longer intimidate me. I come so often they should consider presenting me with a special award.

Today’s talk, was part of a  BDS workshop for new recruits. The person leading the talk was Riya Hassan, a SOAS alumni, who now works for the BDS central committee. Although she didn’t tell the crowd, Riya was apparently born in Lakiya (Laquia) in the Negev. That being the case, Riya failed to tell the audience that she is one of the only Arabs in the Middle East who can vote. Part of the most liberated Arab community in the entire region.

The format is typical of a BDS recruitment session. They spend the first 30 minutes or so, engaging with the crowd, asking them what they already know of BDS, where they are from, why they are here and most importantly what criticisms of BDS they have heard.

Then Riya began to speak. The first thing that Riya wanted to impress on those listening was that:

“BDS is a tactic. A tactic within a broad spectrum of tactics that an indigenous people who are fighting for liberation deploy”.

This means that to understand BDS we need to recognise it is not alone, but rather part of the arsenal. It lines up alongside Hamas rockets, knives, suicide belts and terror tunnels, Arab violence, another ‘tactic’ that is ‘deployed’ to destroy Israel. Like ‘lawfare’ or attempts to delegitimise Israel at the UN, BDS does not oppose violence, it operates alongside it.

Riya is desperate to skip to talking about what BDS wants these students to do, but first she needs to circumvent the small issue of why Israel is so evil it needs to be (B)oycotted, (D)ivested from and of course (S)anctioned.

This is always an incredible element of any session. And it invariably follows the same pattern of history.

Firstly, 1917. Balfour. The idea that the British gave away the land of the indigenous people to European colonists. In line with this, Riya managed to discuss Balfour without even mentioning the word ‘Jewish’.

Then they skip to 1948. As if the week after 2nd November 1917, was 9th November 1948. This is done for a simple reason. For the Palestinian narrative to hold true, European colonists simply turned violent against an indigenous civilian population so as to ethnically cleanse the villages because they had to make room for more European colonists. It was as Riya suggested a ‘pre-planned expulsion’.

Therefore the entire context of the political and military battles that were to lead to ‘Nakba’ has to be removed. There is no violent opposition to immigration. No massacres of ancient Jewish communities in Jerusalem, Tzfat, Hebron. No attempt at building bridges. No partition plan. No Arab rejectionism. No Arab irregulars. No civil war. No regional conflict. No calls by Arab states for another genocide of the Jews.

Once the history has been sufficiently flattened, the accusations of current crimes begin. The first fact presented is that since the beginning of 2016, 103 Palestinians have been ‘shot dead’ by Israeli armed forces. There is no attempt to provide context, such as this. Apparently Israelis just go around shooting people.

There was no, and I mean *no* mention of *any* Arab violence made by the speakers in the entire 2 hours I was in the room. When Oslo was mentioned, it was only referred to as evidence that Israel doesn’t fulfill promises. The entire backdrop of the stagnation of the Oslo Process, the terrorism, intifada, explosions, suicide bombings, knifing. All absent. No need to complicate the BDS message.

To excuse the fact BDS ignores Israel’s borders, ’57 laws’ that discriminate against Arab Israelis are referenced. 57. All laws that have anything to do with the Israeli flag – included. Positive discriminatory laws such as those not demanding from Arab media the presence of the Hebrew date – included. Not demanding the same of non-Jews on religious days such as Yom Kippur- included. A vaccination law – included. Even a law that restricts trade with enemies outside of Israel – included. Put it this way. No nation would survive such a test. The cross inside the English and UK flags would be included.

Do not underestimate this point. If this BDS claim is not valid, one of the 3 central BDS pillars is turned into dust. An in-depth study into Adalah’s absurd 57 law claim found that ‘Israel’s laws conform to advanced western standards’. By looking closely at what they argue, BDS is exposed as an Israel hating ‘tactic’ that seeks the destruction of the only liberal democracy in the Middle East. Why else would Riya Hassan, an Arab born inside a democratic state, be deliberately spreading falsehoods designed to undermine the Jewish state, not within lands taken in 1967, but inside the 1949 borders of the state of Israel?

BDS also uses the distorted timeline to suit its own agenda. Because there are no details, no depth, to the period between 1917 and 1948, all useful events get replayed as if they occurred simultaneously in 1948. Because they do not even attempt to educate the BDS activists with history, there is never enough knowledge in the room to challenge them.

If you view the use of the Moshe Dayan quote used in the video above. Yes, the quote has been mangled to distort its central message. After all Dayan was talking about land purchase and co-existence, not separation or ethnic cleansing. But even then this is not the most outrageous part of the deception.

In the quote Dayan referenced 4 specific Jewish place names Nahalal, Gvat, Sarid and Kfar Yehoshua. It isn’t a coincidence that Dayan knew these names. His family moved from Deganiah to found the Moshav at Nahalal. The others were local villages.

Nahalal was established in 1921, Gvat in 1926,  Sarid 1926 and Kfar Yehoshua 1927. In the 1931 census Sarid had a population of 69, 3 Muslims and 65 Jews. These villages were built on land legitimately purchased through the 1920’s from absentee landlords.  So Dayan was not talking about 1948 at all. This is a major and massive deception on the part of the speaker. This is the way #BDS *always works*. It flattens the conflict out of existence.

This is a glimpse into just a few minutes of a BDS meeting. Watch how the BDS speakers react when challenged, see just one of the outrageous messages spread on the UK campus.

But read between the lines here as well. There was no attempt to counter the question on Oslo. Facts are unwanted. They are here only to spread hate and lies, there is no interest in discussion. Similarly, the point of racism against Arab Jews. See how BDS feeds off of the ignorance and hatred of the crowd and then disseminates that information, spreading that hatred, that distortion, those lies, into the others like a plague.

Finally, the last question, put forward by a student at a local university, one of the three Zionists in the room. Here was an opportunity for those speakers to distance themselves from terror and incitement. Why wouldn’t they object to wasting money on terror tunnels? Why didn’t they speak up against the incitement? That silence, the way those issues were brushed away, highlights how BDS and Hamas, the boycott and the terrorists are all holding hands.

This was the first event of the season. Already it is open season on the truth, on Israel, on Jews. It is going to be a long academic year. Just as Hamas are training terrorists, just as schools in PA areas are creating a conveyor belt of potential attackers by teaching children to hate Jews, over here in the UK, the BDS arm needs people who will boycott. Each element of the army, each soldier being trained to fulfill the duty expected of him. The latest recruits at SOAS have just signed on for active service.

10 thoughts on “BDS open the season at SOAS, back into the snake pit”