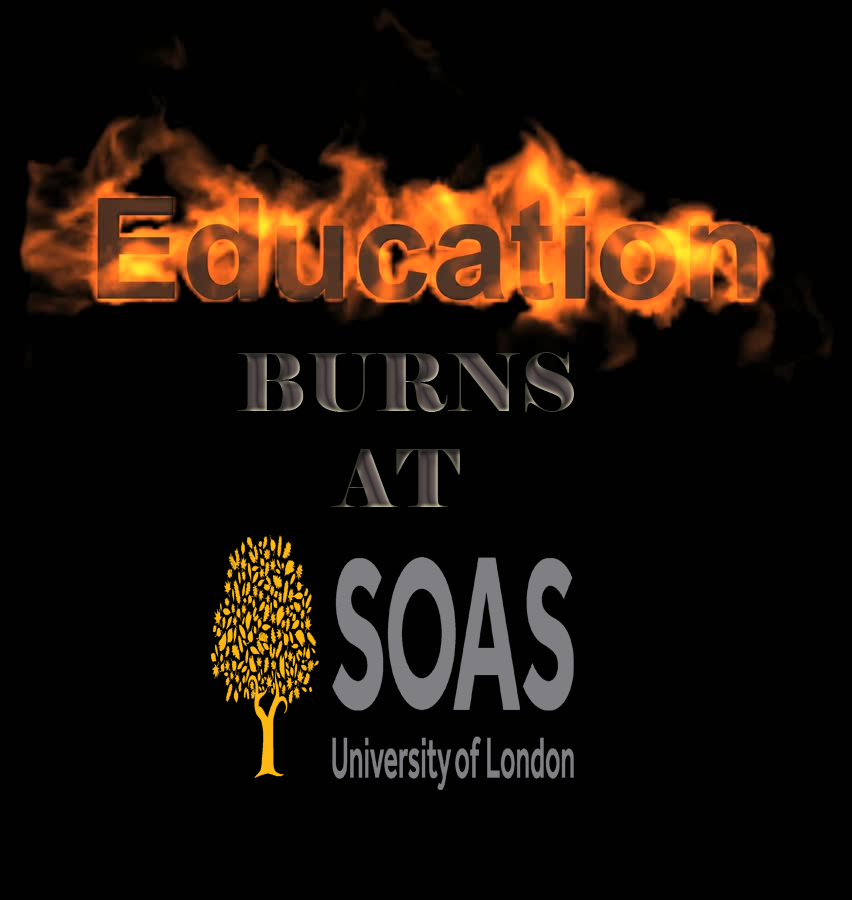 Why you shouldn’t just shrug your shoulders at SOAS 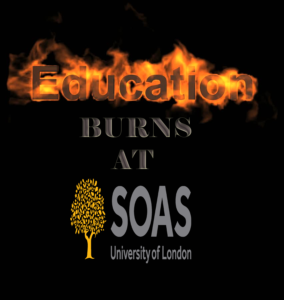 For those of us who have experienced the hostility of SOAS, even images of the building can create an uneasy feeling. Those Jews who attend events, tell tales of the anti-Jewish rhetoric that thrives and multiplies there. Yet until you have personally experienced it, it is difficult to adequately describe the threat SOAS presents. Too many people make the mistake of suggesting SOAS, like towns such as Bradford, simply reflect the political demographic of those that walk within. That’s ‘okay’ they suggest, because it is just Bradford, just SOAS.

They are wrong. They completely fail to understand the central message such understanding brings. This is why:

SOAS isn’t some outlying town, it is a university. A university in the heart of London. The prime function of SOAS is to create an environment where research and higher education flourish. Where people that enter its halls have their underlying beliefs challenged, reaching for greater understanding, whilst standing on the giants of those that came before.

And yet SOAS isn’t fulfilling its primary function. SOAS in reality is little more than a breeding pit of ignorance and intolerance. A place where for many, education becomes stymied, if it isn’t in line with the narrow ideological constraints of the thuggery that has taken control. Students of some minorities are simply unwelcome if they refuse to conform. In lecture halls, lies are told openly, and the university promotes and defends an environment where those lies cannot be challenged. Like Stalinism and Nazism, at SOAS, history is being erased and replaced with a dangerous ideology through the use of threatening behaviour and effective propaganda.

I have seen over a dozen events at SOAS. At almost every single one, all that is thrown at students, is lie, after lie. A pyramid of fiction. If someone openly challenges a lie he becomes ridiculed, threatened or physically intimidated. These are not just student events. When SOAS held an official centennial lecture, they gave the honour to Rajeh Shehadi, who for an hour stood and demonised Israel, delivering numerous falsehoods in the speech. When people complained to Baroness Amos, the Director of SOAS, she in turn defended & protected Shehadi’s ‘opinion’. It wasn’t opinion that was being criticised, it was Shehadi’s use of the platform to propagate falsehoods. There is no difference at SOAS. Truth has no meaning.

This is a constant theme at SOAS. Take the statement that ‘all the Palestinians were brutally expelled in 1948’. It isn’t an opinion, it is a historical fiction. This lie is a central underlying falsehood upon which the entire antisemitic / anti-Zionist argument is built. It is both false and heard frequently inside SOAS. This central lie cannot be challenged. Other tales, just as absurd and offensive are also delivered at event after event. SOAS provides a stream of lectures and events that demonise Israel. Much of the substance clearly crosses the Government’s accepted definition of antisemitism. A definition, that SOAS refuses to accept.

The central way that SOAS and other similar institutions fend off criticism of their ideological opposition to mainstream Jewry is through the use of the Jewish 5%. The anti-Zionist Jews. Every community has a 5%. With Jews, this tiny minority, normally of Marxist or near Marxist leaning, are ideologically opposed to Zionism. The remnants of movements like the Bundists, who were annihilated in the Holocaust. Many of these are on the fringes of the community, and their identification as a Jewish anti-Zionist, is the only Jewish identification that still exists in their lives.

The use of Jehovah’s Witnesses to attack mainstream Christian thought would be seen as a direct attack on Christians. The use of the Jewish 5% should be viewed in the same way. As a strategy, it is inherently antisemitic. Yet almost no university will hold an event today without first ensuring their ‘good Jews’ will be present. Last night at SOAS they had several.

And then there is propagation. Within the SOAS walls, the lies spread unchecked. At two separate events, in Warwick and Sussex, I saw James Eastwood from the Queen Mary University deliver a speech on racism in Israel. Two universities, both with anti-Israel activists / academics who are seeking to spread the fictional tales. Eastwood’s thesis won an award. His field of expertise is ‘racism’ within Israeli society. And yet what was visibly evident from his presentation at both Warwick and Sussex, was that he couldn’t differentiate between European and non-European Jews. This award winning ‘expert’, showed a slide of a Mizrahi (eastern) family and claimed they were European. His dialogue was full of distortion. Where did he learn the trade? SOAS, under the watchful eye of Professor Laleh Khalili.

And this is how it spreads.

Look at Exeter. At Exeter a disgraced Professor from Haifa is a head of a department. Other historians have called Ilan Pappe a liar. In this video, Ilan Pappe openly suggests that there are times it is important to lie ‘for historical records’. This is a Professor of History! It is no coincidence that sitting next to him in the video, is another scholar from SOAS, Rubah Salih.

Pappe rolls anti-Zionist activists out of Exeter like sweets from a conveyor belt. He chooses the reading list. He dictates what is true and what is not. In the end, brainwashed individuals, that have been let down by the system that was meant to educate them, embark on a activists career where they propagate the lies themselves. Ghada Karmi is also from Exeter. I recently co-authored a report that dismantled a book of anti-Zionist lies authored by Thomas Suarez. When you open Suarez’s book, this is how he begins his introduction:

“This book grew out of conversations with Ghada Karmi”

This entire narrative, this fictional tale of ‘Palestinianism’, is a giant Ponzi scheme, that uses places like SOAS as a hunting ground for new investors. The gullible students are the schemes prey. Look at how many of today’s anti-Zionist academic activists were shaped in the cesspit of SOAS. A university betraying both itself and the society it is meant to serve.

Wherever you find one central anti-Zionist figure, you will find a production line of anti-Zionist activists. And there you will also witness a growing intolerant attitude for the truth and for Jews.

So why is it important

It is important because it shouldn’t be happening anywhere. Just recently, Jonathan Arkush met with Baroness Amos. He described the meeting as ‘the worst of his life’. At the very top of SOAS, those in control have lost their way. Rather than bring the university in line, they have become protectors of the disintegrating environment. The Board of Deputies of British Jews is now considered a hostile element by a UK university and treated as such. A quick search will provide dozens of examples, of anti-Israel and Jewish rhetoric delivered at SOAS. Just one website, Richard Millett’s lists more than a dozen of his own personal experiences.

Yet SOAS is just an example of what can and will happen, wherever the perfect storm is created. Anti-Zionist activists, funding and the social and ethnic make-up of the students. Nobody has any interest in addressing the problem. At SOAS, Jews are not just a minority, they are a hunted minority. If you are Jewish with a soft spot for Israel you hide in the undergrowth or become prey. At a place like SOAS, which is so dependent on pacifying the mob, the Jews are left unprotected.

SOAS isn’t some regional town. It is a university. SOAS is like a local police station where the officers are all corrupt, were those arrested can have unfortunate accidents and local minorities live in fear of the authorities. SOAS is like a local council, where the Councillors prohibit Jews from certain professions unless they are willing to convert to the local church belief. This is an indication of a societal problem at an organised level. Not just a bad street, not just a bad town, but a bad Executive. A growing problem, developing at the very heart of our society. One that clearly threatens Jews.

Like a cancer it has to be rooted out. We need to identify what the problem is. Why Baroness Amos stands atop a rotten edifice, that betrays all of the core values it is meant to hold dear. We need to ask why is the lie unchallenged? Is it the demographics? Is there finance entering campus that is proving detrimental to Western society? What exactly is it that is developing in the academic undergrowth? Everyone who views SOAS with distaste should want to understand just which variables need to be in place to create an environment like this.

If you don’t want all universities to eventually look like SOAS looks today, you have to understand why this is happening. Why in London there is a university that threatens people who tell the truth. First there was one, now there are several of these pockets, spread across the country. A disease that is spreading. Which is why you cannot, must not,  just shrug your shoulders.