Alongside Jonathan Hoffman, I spent part of the summer inside the National Archives at Kew, checking some of the sources that Thomas Suarez had used to build his argument for the book ‘State of Terror’. The findings were inexcusable. Suarez distorted the documents to such a degree that history was unrecognisable.

At times Suarez had simply inverted the meaning of a document. At others, I felt we were looking at entirely different files. From the perspective of someone who respects historicity and spends much time sewing together the complex tapestry of historical context, Thomas Suarez is an academic charlatan.

Recently, Thomas Suarez has been spreading his hate-filled mythical tale in the United States. He also found time to respond to the report. What an empty response it was.

Given that what was found in our analysis was so overwhelming, his recent response is a clear attempt to create a deflective dialogue. To suggest that we are engaged in an argument over opinion.

It will not work. I will not be drawn down a rabbit-hole by anyone, least of all by Thomas Suarez. Our argument was that his work is deceptive. That he has misused, misquoted, misrepresented and even inverted the meaning of, what he found in the archives. Our underlying position was that this occurred too often to be just down to Suarez being an awfully bad historian.

Time after time, quote after quote, file after file. ON EVERY SINGLE OCCASION we uncovered an error, we found the error supported an anti-Zionist stance. Each one dehumanised Jews or created a devious intent surrounding their actions. None of the many, many mistakes we found, favoured the Zionists. Not one. How on earth can that be deemed anything but deliberate?

I am reminded of part of the judgement following the David Irving trial:

‘the correct and inevitable inference must be that for the most part the falsification of the historical record was deliberate and that Irving was motivated by a desire to present events in a manner consistent with his own ideological beliefs even if that involved distortion and manipulation of historical evidence.’

The argument we present is simple. Some examples:

These are just some of the many errors we found when comparing the citations with the original documents. There are far more listed in detail in the report. Even more still remain to be uncovered.

Even in his response, Suarez cannot but help rely on distortion. He says the event at the House of Lords was not a book launch. Here is the publisher’s press release on the day of the event: 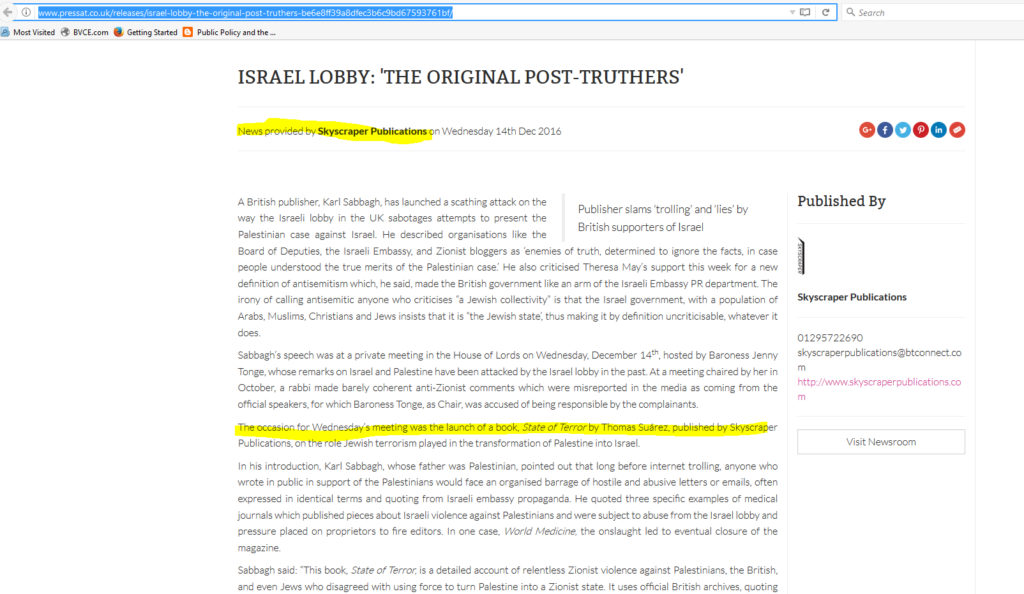 He can squeal all he likes. Even the publisher called it a book launch.

At another point in his response, Suarez again suggests that the British are ‘likely’ to have been responsible for the Farhud. A brutal and bloody anti-Jewish Pogrom in 1941 Iraq. Suarez pushes absurd conspiracy tales that are devoid of historical context and relies on other conspiracy theorists for fodder, that he then weaves together to create images that are truly absurd. The British had enough problems with Jews arriving in Palestine, why on earth would they have sought to unsettle the Jews of Iraq?

He is surprised that we call the book antisemitic. He shouldn’t be. State of Terror is a book that fabricates lies about Jews. It distorts quotes to make most Jews look like monsters. It invents episodes, inverts the meaning of content and strips the context away to dehumanise every Jewish action.

It isn’t just about Zionist Jews either. When talking of a survivor of Mengele’s experiments, Suarez doubts the veracity of the story because he cannot comprehend why someone brutalised by the Holocaust would take so long to find her children, who had been scattered amongst the remnants of European Jewry. Can you imagine him treating a non-Jewish victim so unjustly?

When discussing Iraqi Jews, he discards the Farhud as completely unrelated to the 1950’s exodus. A comprehensive misrepresentation of how minority communities exist in relation to the events that occur around them. Ferguson didn’t happen yesterday, but its effects are still widespread. From Rodney King to Ferguson is 22 years. Between the Farhud, the persecution of Jews in 1948 and the exodus in 1950/51, there are less than ten.

This attempt to turn Iraqi Jews into puppets for Suarez to use as a weapon with which to attack Zionism is typical of the way he works. Jews are never human, their actions always ready to be moulded to how the author sees fit.

Just as he does with the idea that were in not for Zionists, Jews would have been saved before the Holocaust, and the DPs given new nations after the Holocaust, Jewish Holocaust suffering then, becomes the fault of Jews. Suarez paints a United States as begging to be allowed to take Jews. This cruel and fictitious tale delivered, even as the MS St. Louis was turned away from US shores.

And it is always against Jews. If I wrote a book dehumanising any minority group, I would rightfully be labelled a racist. Suarez has done this deed against Jews. A book so riddled with errors that only diehard ideological bedfellows could possibly still give him any credit.

And of course it is antisemitic. It is dripping with overstated Jewish power. Suarez has written a book that suggests even in the darkest hours of the Holocaust, Jews had power to manipulate foreign governments to ensure their own families continued to suffer. A global Jewish grab for power. The poor Christian societies of the West, had no choice but to succumb to the will of the powerful, evil Jews. Thus Jews died in the Holocaust. Thus they remained stuck in camps for years after the war ended.

The law of averages suggests we are unlikely to have uncovered the worst distortions. We only checked some of the source material listed. It is reasonable to suggest that many, many errors are left to be found. We are adamant that our research has shown the book to be a disgrace. A tale of errors, written by an academic charlatan who is driven by hate and a twisted ideology.

Thomas Suarez wrote a pathetic response, and he wants to deflect in a circular argument about opinion, not historical facts or the errors in the book. We will not play that game. If he wants to take it further, if he wants us to go back to the archives and find another 50 horrible errors, we can easily do so. Personally, I would much rather that horrible little man just shut up and left us alone.

14 thoughts on “Thomas Suarez, an academic charlatan. State of Terror is hateful fiction”