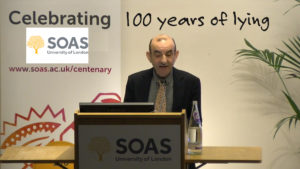 Last night 9/3/2017, I had an invite to two very different events. The first, an event at UCL hosted by the UCL Israel Society, with Mohammed Zoabi. The second, part of the SOAS centenary lecture series, with a talk by ‘renowned human rights lawyer’ Raja Shehadeh.

As it was, I chose to see both, an upside to the new trend of live streaming. This a tale of two people. One looking beyond the hate, the other losing himself to it. I am left asking why SOAS chose to place such a moment of recognition on pure anti-Israel slander? Academia is now blind to truth, deaf to reason and actively assisting in spreading propaganda instead of academic research or messages of hope.

Mohammed Zoabi is a confident young man. Very easy with the audience, and spent most of his time interacting and taking questions. Even with the reflection and confusion that being an Arab inside Israel must bring, he handles these different identities well.

Nor is Zoabi an ‘Israeli apologist’ of any sort. He is clearly moderate, open to criticism and ideologically firmly grounded. It is wrong to suggest Zoabi is a Palestinian Blumenthal or Pappe. Zoabi is no self-hater, he is someone who reaches out to both sides.

What Zoabi clearly carries is recognition that Israel is his state, that much of what is being pushed around by the anti-Israel activists is based on lies and distortion. He recognises both the freedom he experiences and the difficulties that conflict introduces to civil society. Like me, he identifies BDS as problematic and based on false narrative.

Those present clearly enjoyed the event.

Then there was Raja Shehadeh. To understand Raja, you only need to listen to the first 3 minutes of his talk.  He begins by outlining how his father was involved in an attempt to make peace with Israel in 1967. A peace proposal set on the lines of the 1947 partition. A deal supported by ‘50’ Palestinians in Gaza and the West Bank.

He speaks of its rejection as if Israel flatly refusing to return to the November 1947 position because 50 Palestinians asked nicely was extreme or irrational. As if the Arabs had proposed something valid and Israel, the aggressor had refused. Remember, this is not about a return to the 1949 armistice position, but the lines of the November 1947 partition plan, the Arabs had all flatly rejected (that led to the conflict in the first place).

And then to press home how Israel doesn’t want peace, Raja said this:

“As time passed, most of the PLO supporters of the plan were assassinated by Israel, amongst whom were my father (Aziz Shehadeh), Issam Sartawi, Said Hammami, Naem Hader (sp?), Azadin Chalak (sp)? Now 50 years later it is what the PLO and most of the countries of the world are calling for. How much suffering would we all have been spared, had gone through then.”

You can see that excerpt here:

So all murdered, but not by Israel. They were killed by other Arabs for not being extreme enough. The truth is, that like everywhere around Israel, Syria, Jordan, Lebanon, Iraq, Egypt and, Libya, political opponents have a short shelf life. Being moderate and placing yourself against radical terror organisations, tends to impact on your ability to stay alive. How on earth can Raja stand on a platform at a London university event and calmly blame Israel for Arab clan wars, Arab extremism, the lack of democracy and their inability to live with those that think differently?

A picture inside a deceptive frame

Even the end of that quote delivered by Shehadeh at SOAS is badly misleading. As Raja had referenced a plan to return to the 1947 lines, he has absolutely no right to claim most countries are pushing for it. There is not a single democratic nation anywhere on this planet that supports Israel accepting a return to the partition lines. Not one.

The apparent idea of this SOAS speech was to misdirect, to lie. Providing an image of moderate Palestinians murdered by an Israel that wanted to avoid a generous peace deal the whole world supports. An outright and outrageous lie from beginning to end.

These distortions are sickening. The Berlin wall was built to keep people in, not protect citizens of a democracy from terrorists. And given Zoabi’s talk at UCL, we can safely say the comparison with Apartheid South Africa is part of deliberate propaganda created with intent to deceive. Why was this given a stage at SOAS?

Once the groundwork was completed, Shehadeh began with the usual historical distortion over the 1948/9 events. There is no reflection, no internal responsibility. SOAS had given Shehadeh a stage and he was going to make the most of it. A brutal and bloody civil war that followed the Arab rejection of the partition plan, was turned into Jews turning up and kicking out Arabs. In Shehadeh’s version there are no Arab troops entering British Palestine in early 1948, no heavy Jewish casualties.

SOAS gives a stage to propaganda

He ludicrously goes on to suggest the Palestinians ‘have no voice’. Never in the history of the world, has one tiny struggle had so much attention, nor has a single voice been amplified above all others, so clearly. Never has a voice been spread so widely without any attention paid to the historicity of the narrative it is spreading.  The Palestinians were given a propaganda stage at SOAS during a centenary lecture. They have just celebrated ‘Apartheid week’. No voice? Tell them to stop lying and people might start paying attention.

In quiet, pleasant tones, he piles false accusation on top of vile slander. Israel’s occupation is ‘lucrative’, as if an innovative, entrepreneurial nation wouldn’t view an open Middle East as opportunity. He speaks of the ‘master race’, of ‘BBC bias’ (they gave both sides a chance to talk – that apparently is bias), suggested Israel ‘needs conflict to survive’, that Israel is ‘betting on the collapse of international law’ and suggested the only reason Israel is not tearing itself apart is because of the occupation. This accusation as Palestinians are little more than warring sects at present and the entire Middle East burns.

Then the human interest stories begin. The usual strategy of Palestinian propaganda. It isn’t enough just to tell people false information, you need to make them want to take action. Unsubstantiated stories, in the rabbit hole of discussion over Israel’s behaviour in the West Bank.

Shehadeh finishes by pushing BDS. He says “that is why BDS, Boycott Divestment, Sanctions strategy is a source of hope”.  This a university event, ‘coincidentally’ falling during the Apartheid Week schedule. It had lies, it had ‘Apartheid’, it had ‘BDS’. A talk so bias, so full of lies, so vile, it could have been arranged by the Palestinian Society. Baroness Valerie Amos should be ashamed of herself.

It is disgraceful this was on the schedule. Shehadeh should not have been at SOAS speaking that night. He should have been at UCL to listen to Mohammed Zoabi. If he had opened his eyes and ears, he would even have learnt something.

44 thoughts on “Bare faced lies, distortion and propaganda at the SOAS centenary talk”