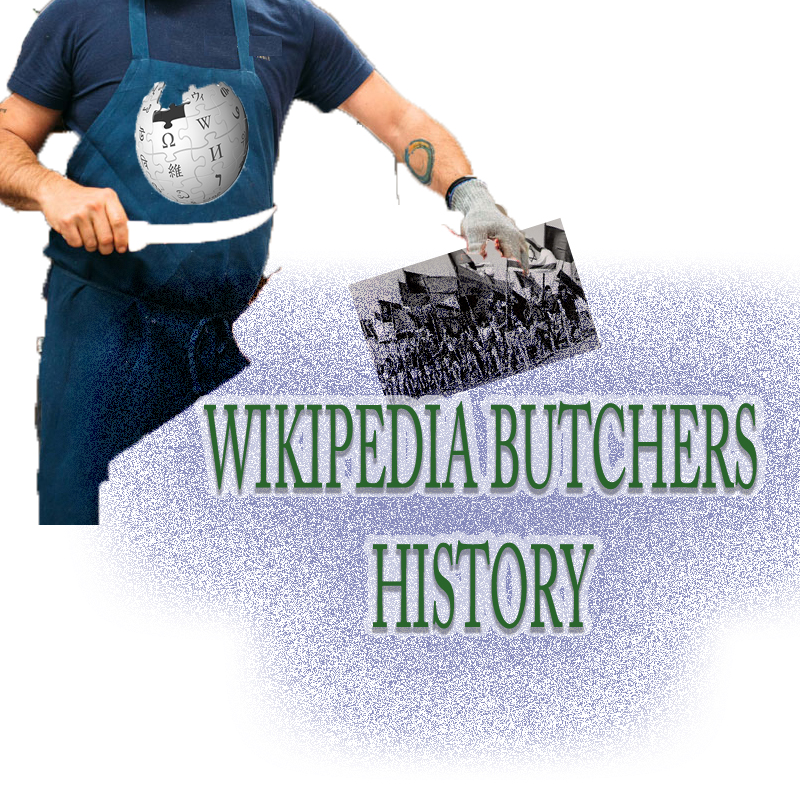 There are two parts to this essay:

I: Wikipedia Butchers History (see below)

Evolution of a Wikipedia page

For most people, the online encyclopedia Wikipedia is ‘just there’, as a handy tool doling out free information with every click. Many also believe the pervasive myth that ‘anyone can edit it’ – thus wrongly thinking the online encyclopedia is driven towards a certain level of balance. But the truth is that Wikipedia is a self-protecting and carefully guarded mirror of the sum motivations and bias of its most obsessive and motivated editors.

For example, the page on the ‘Israel Lobby in the UK’ was created by an editor with a clear Nazi fetish – which is why the page even exists today. Once created the page then became a magnet for other antisemites to develop it further. Unsurprisingly the page today is jam-packed with antisemitic conspiracy, and would not look out of place if it were published on a neo-Nazi fake news outlet.

Another easy example – a prolific Wikipedia editor (18800 edits) endlessly butchered Wikipedia to suggest that the allegations of antisemitism in the British Labour, Party were all part of a baseless smear campaign. Yet the same editor also appears on the page of the Islamist Muslim Council of Britain, inserting comments about how ‘Islamophobia’ in the Conservative party is a real and major problem. This blatant, Islamist driven, anti-Jewish skew – shapes the Wikipedia pages that we are left to read.

As Wikipedia informs more people than any other source on the planet, the anti-Jewish bias plays a key role in the rise of antisemitism that is seen on our streets. Wikipedia is also a central pillar in the Demonise Israel Campaign. Make no mistake about it – the enemies of the Jews have organised there.

The Wikipedia page that I wish to highlight is titled ‘Timeline of anti-Zionism‘, which self-describes as a page that ‘chronicles the history of anti-Zionism, including events in the history of anti-Zionist thought’. The page is a perfect example to show how parts of Wikipedia have been shaped into raw propaganda – dangerous, deceptive and vicious ‘miseducational’ tools – that have been written by antisemites in a *deliberate* attempt to demonise Israel, Zionism and Jews.

The page was created by the user ‘onceinwhile‘, a notorious propagandist and prolific Wikipedia editor (over 36000 edits) that spends much of its time belittling Jewish history and reducing the online Wikipedia footprint of Jewish suffering. I have pointed out some of its many destructive actions before.

This specific Wikipedia page only exists because ‘onceinawhile’ created it – and then staunchly defended it – from those who rightly saw it as a needless offshoot (there is another page on the history of anti-Zionism). The motivation behind the creation of the page – and the protection of it – is rooted in antisemitic anti-Zionism.

The Holocaust and anti-Zionist thought

Any encyclopedia seriously approaching anti-Zionist thought cannot help but approach the subject with an ‘BH’ and ‘AH’ system. There is anti-Zionism before the Holocaust and a very different anti-Zionism afterwards. These are not the same thing at all and to treat the timeline like a continuum grossly misrepresents the subject. So the first notable thing about this page – that details ‘events’ in the history of anti-Zionist thought – is that the Holocaust isn’t explicitly mentioned as an event. Incredibly, ‘Adolf Hitler’ and the rise of the Nazis – or Arab alignment with the Nazis – are not mentioned either.

In fact, the first mention of the Holocaust on the page is in a quote from 1961 that blames the Zionists for it – seeing it as being sent by God as a punishment.

Actual Holocaust mentions in the page:

And that is it. Jews were to blame for the Holocaust, they exploit the Holocaust to get rich, Jews today act like Nazis – and the real enemies of Jews are the Jews themselves. This is how Wikipedia views the impact of the Holocaust on anti-Zionist thought. It is as outrageous and sickening as it is twisted and non-factual. How about adding this one:

1942-1945: The key Jewish opposition group to Zionism, the Bundist movement – died in the furnaces of the Holocaust amidst the Nazi effort to exterminate the Jewish people.

Was this not important enough to mention as a key event in the history of anti-Zionist thought?

As you read through the list of events that is presented on the page, the strategy of the editors soon becomes clear. For example – how is the Mufti, meeting Hitler to discuss the future of the Zionist project, not included in an encyclopaedic entry of the timeline of anti-Zionism? The Mufti is not mentioned anywhere on the page because it exposes a key strand of anti-Zionism – a genocidal strand – that these editors of Wikipedia want to remain hidden.

One this realisation hits you, reading the page becomes an exercise in witnessing the absurd. For example a non-relevant quote from 1943 reported by a minor author, makes the cut, because it permits the editor to suggest accusations of antisemitism are often bogus – meanwhile the President of Iran can publicly call for the destruction of Israel – and that is omitted. How is Ahmadinejad calling Israel a ‘stinking corpse’ that is ‘on its way to annihilation’ – not a key moment in anti-Zionist thought?

Almost every single entry pushes one of the key messages of either Marxist or Islamist anti-Zionist propaganda. For example, Finkelstein’s Holocaust Industry is included – even though it is not strictly an anti-Zionist text. Yet the Hamas Charter – a clear anti-Zionist text if ever there was one – is simply not there. Hamas do not make it onto the page at all – nor does Hezbollah. How is genocidal anti-Zionist rhetoric from radical Islamic ideologies not included in a timeline of anti-Zionist thought?

The bare truth is that the only thing that is allowed onto this page is the type of material that Electronic Intifada would publish.

Like most anti-Israel propaganda pages on Wikipedia, the page is well policed. For example a Wikipedia editor named ‘Nishidani‘ patrols the page, removing things that dirty the sanitised image of anti-Zionism. When someone tried to insert an antisemitic anti-Zionist incident Nishidani deleted them. His reasoning is useful. Following a deletion in 2017 he wrote:

“If we listed every antisemitic incident as anti-zionism, then the page, which talks of long term movements or major incidents or influential theories would lose its raison d’etre.”

By using the phrase ‘raison d’etre’ – Nishidani means that the page was created not to tell the whole truth – but rather to distort it. In that comment Nishidani also presents three criteria for inclusion:

This list is absolutely nonsense given some of the petty and inconsequential stuff that is included – but more than this – how are Hezbollah and Hamas not long term movements with influential theories that have caused major incidents? Both Hamas and Hezbollah tick every box of Nishidani’s statement but still the page will not reference the genocidal antisemitism of these anti-Zionist terrorist factions. Given the endless list of historical activity by Arab terrorists against Jewish and Zionist targets across the globe, it is incredible that the words ‘hijack’ and ‘terrorism’ do not appear on the page at all.

Some of the entries are truly absurd. The page mentions (1943) the ‘National Liberation League in Palestine’ – which was a short-lived, tiny and inconsequential group of Arab Communists in British Palestine. As the group supported partition it cannot even strictly be defined as ‘anti-Zionist’ yet it is still included. It was probably mentioned so as to include a positive comment about saving Jewish refugees.

Yet none of the far more numerous and relevant groups which violently opposed the Jewish refugees are mentioned. Which reinforces the key point. Items are included that promote a particular vision – even if they are not worthy of inclusion – and others – far more worthy of inclusion- are omitted because they destroy Wikipedia’s editorial position.

Another example. The (1918) listing for the Yevsektsiya suggests only that it was formed in Soviet Russia ‘to fight Zionism and bring Communism to the Jewish masses’. It fails to mention that the stated aim of the group was the ‘destruction of traditional Jewish life, the Zionist movement, and Hebrew culture’. They were hard-core antisemites. Maybe we can call this repetitive Wikipedia strategy ‘hatewashing’.

A stream of content-empty, repetitive books is included – but there is no entry for the blood-curdling cries of the Arab leaders. Abdul Rahman Azzam, the Arab League’s first secretary-general, said that the establishment of a Jewish state would lead to “a war of extermination and momentous massacre which will be spoken of like the Mongolian massacre and the Crusades.“. Wikipedia editors obviously believe that the horrific and murderous ideology promoted by Arab leaders is not as worthy of mention as books that almost nobody bothered to read.

And looking at anti-Zionism today, nothing has changed. All around us we see violent threats, and antisemitism spreading through anti-Zionist thought. The false image that anti-Zionism has a friendly, peaceful face may be all you will see on the page, but as Bret Stephens pointed out in the NYT not everyone got the memo:

These incidents are just a snippet, but provides an image absolutely representative of anti-Zionism in the modern era. Just as the Hamas Charter represents the 1980s, the three Nos of Khartoum the 1960s, and the genocidal call from the Arab leaders the 1940s. Where is all this in Wikipedia’s sanitised timeline of anti-Zionism?

This isn’t an encyclopedia – it is a propaganda site.

The timeline of anti-Zionism page is an exercise in carefully polished propaganda. It is not real – it is not history – it does not even try to be balanced. All that exists is a page for anti-Israel propagandists to use as a reference guide.

I cannot stress this enough Wikipedia is a hostile website that spreads anti-Jewish disinformation and hate – much of it written by the hands of Islamists. This is even more important given what will be exposed in part two of this story – evidence that ‘Wikipedia promotes terrorism’. Coming soon.

Support my research for 2022