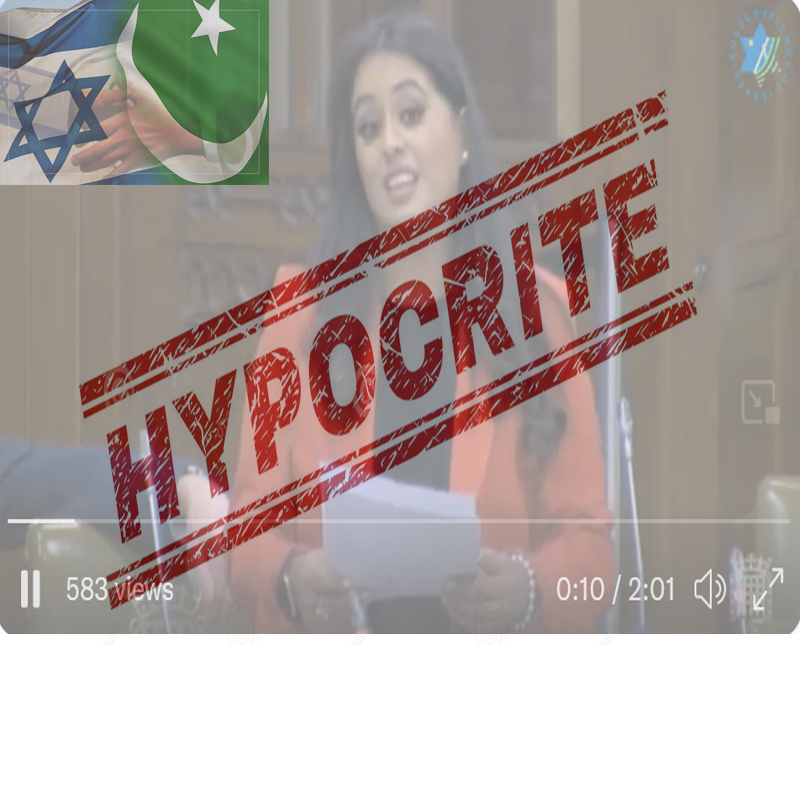 Three weeks after an MP was bigging up increasing trade with the serial human rights abuser Pakistan, she was in Parliament calling for trade boycotts against the UK’s democratic ally Israel. Did she think nobody would notice? This outrageous hypocrisy exposes Islamist driven political bias at the heart of Westminster. Is this really what her constituents voted her into office to do?

Anum Qaisar (she recently seems to have dropped the use of ‘Qaisar-Javed’ as her surname) is the MP for Airdrie and Shotts. Qaisar was originally a Labour activist, and was former general secretary of Muslim Friends of Labour. She defected to the SNP over Scottish independence. On the UK Government website, she identifies her nationality as Scottish, her ethnicity as Pakistani and the religion she follows as Islam. She openly says that being a proud ‘Scottish-Pakistani Muslim’ shapes the way she lives her life.

No problem so far. Although there were issues with her selection as a candidate for the seat. There were accusations that she was pushed through because of her friendship with the then SNP Scottish Justice Minister – Humza Haroon Yousaf. This was against the wishes of some local SNP party members – who said they were ‘disgusted at the way the selection had been handled and at the lack of respect to the branch‘.

Qaisar and the Israel issue

Following her defection to the SNP, Qaisar swiftly aligned with the SNP Friends of Palestine (image left 2015, image right 2016):

Qaisar won the byelection on the 14th May 2021. On the very same day, the toxic anti-Israel organisation CAABU published an anti-Israel letter signed by several politicians. Incredibly Qaisar found time to sign it – which makes this one of her first public political actions following her election win.

Leaving aside her traditional maiden speech in May 2021, the next time Anum Qaisar spoke in Parliament was on the 10th June 2021. What was the subject that drove her to ask a question? Israel. Her question was about arms sales to Israel and ‘the systematic oppression of the Palestinian people by the Israeli Government’.

Qaisar also made a tweet to let everyone know what she had done. She ended the tweet with the ‘free Palestine’ hashtag:

Her official website also takes time to point out that today she is in the APPG (all Parliamentary group) for ‘Palestine’.

But the question can be asked – why ‘Palestine’? Why not Syria, Turkey, Russia, China or any of the real human rights issues on the planet? She seems to have no interest in those. In fact, when it comes to Pakistan – another of the world’s real human rights abusers – she has never made a critical tweet – far from it. In fact Qaisar pushes the case for stronger ties:

Which brings us to last week. Last Thursday, January 20th, there was a House of Commons debate on UK – Israel trade negotiations.

The Israel-UK trade relationship is important. Israeli innovation in the vital tech and pharmaceutical industries is world renowned, and its position as a strong UK ally, and MENA’s only liberal democracy – only embeds the relationship further. Finally, Israel’s expertise in the field of terrorism keeps us all safer – from London to Edinburgh. You would expect a positive discussion in Parliament and for the most part the debate reflected those strong ties.

Simon Cobbs from Sussex Friends of Israel watched the debate and described it like this:

“A hugely positive reflection of the amazing trade relationship between Israel and the U.K. that continues to grow exponentially. Possibly the stand out point that was reflected by most of the MPs who spoke (including the Labour Party spokesperson) was Israel’s contribution to saving British lives, both civilian and military. The MPs spoke of their pride in the ever developing and increasingly strong bi-nation trade and the opportunities it presents post-Brexit”

All the MPs that contributed spoke of their pride in the strong bi-nation trade. All except one -Anum Qaisar from the SNP.

Anum Qaisar’s speech contained 1138 words – and not a single one of them was positive. She is a MP representing a constituency in the UK. Her constituents are safer and healthier because of Israeli innovation, the UK-Israel security partnerships and UK-Israeli trade. Yet not one word of her speech was positive or reflected the vital importance of closer UK / Israel ties.

Basically her line was this: until such time as groups like HRW are happy (which will be never) and Palestine is free (which is more about Hamas, Fatah, the IJ and PFLP than Israel) – the UK should have as few dealings with Israel as possible.

Anum Qaisar is an anti-Israel obsessive and clearly follows the same absurd anti-Israel feelings that many politicians from the SNP do. But this story does not end there.

Where was Anum Qaisar in December?

Just three weeks before Anum Qaisar tried to argue against Israel-UK trade, she was in Pakistan. You know Pakistan – the serial human rights abuser. Pakistan is a state in which the government makes people ‘disappear‘, Christian (and other minority) children are kidnapped, tortured, forcibly converted and married off to middle age Muslim men, and even false accusations of blasphemy can lead to non-Muslims being publicly lynched.

Freedom House does not consider Pakistan a free nation. In fact it scores just ’37’ on their 2021 ‘Freedom Table’. Israel – even with the threats of radical Islamic terror groups – is listed as ‘free’ and scored ’76’. Israel scores more highly than several European nations – Pakistan only just beats Uganda. In the Democracy Index Israel scores ‘7.84’, giving it a higher score than Italy, Greece and Belgium. Pakistan only received ‘4.31’ – which is even worse than Erdogan’s Turkey.

In other words, the two nations are incomparable. Israel is a free, liberal nation doing its best in extremely difficult circumstances – whilst Pakistan is turning into just another oppressive failed state.

So what was Anum Qaisar doing in this backward, abusive, human-rights abusing country? Qaisar was actually talking about how trade with Pakistan needs to increase. Qaisar first turned up over xmas in Dubai – addressing the ‘Overseas Pakistan United Forum‘. It was an event to celebrate the Pakistan – UAE partnership – although I am unsure what that has that got to do with an MP from the SNP.

Because of her own media silence, the dates are not all clear – but this trip included the visit to Pakistan:

Bearing in mind the toxic demands that Anum Qaisar had made on the UK’s democratic ally Israel – it is worth reading through what she had to say about trade with the terrorist-supporting and human-rights abusing nation of Pakistan:

It can be noted with interest that Qaisar did not post about this trip on Twitter. Her feed went virtually silent for the time she was away. Maybe she did not want her constituents to know.

Hypocrisy that knows no bounds

Anum Qaisar’s key points about Israel also included the UK-Israel arms trade. She seem to have a problem with the UK selling Israel the weapons that it needs to defend itself from radical Islamic terror groups and the growing threat from Iran. But here is the real twist. The UK sells Pakistan weapons too. In fact, Pakistan has had more than twice as many (157 vs 77) ‘unlimited-value’ weapons licenses issued (they’re the important ones) since 2008.

Anum Qaisar has never apparently asked a hostile question about Pakistan. She certainly never tried to tie trade to human rights – far from it. Nor has she called for the UK to stop selling arms to Pakistan. Instead she travelled to a seriously oppressive nation to try to get more trade flowing.

This is hypocrisy that knows no bounds. And one that clearly betrays the interests of her own constituents. It is almost a cliche. A British Muslim MP with Pakistani heritage gets into Parliament and then spends her time bashing Israel whilst simultaneously promoting Pakistan.

From the evidence here you cannot argue that Anum Qaisar calling for a boycott of Israel is a human rights issue. Clearly if she seeks to improve trade with Pakistan – human rights is not really driving her agenda. So – if it isn’t human rights – what is it?

I will leave that for you to decide.

129 thoughts on “The outrageous hypocrisy of Anum Qaisar MP”