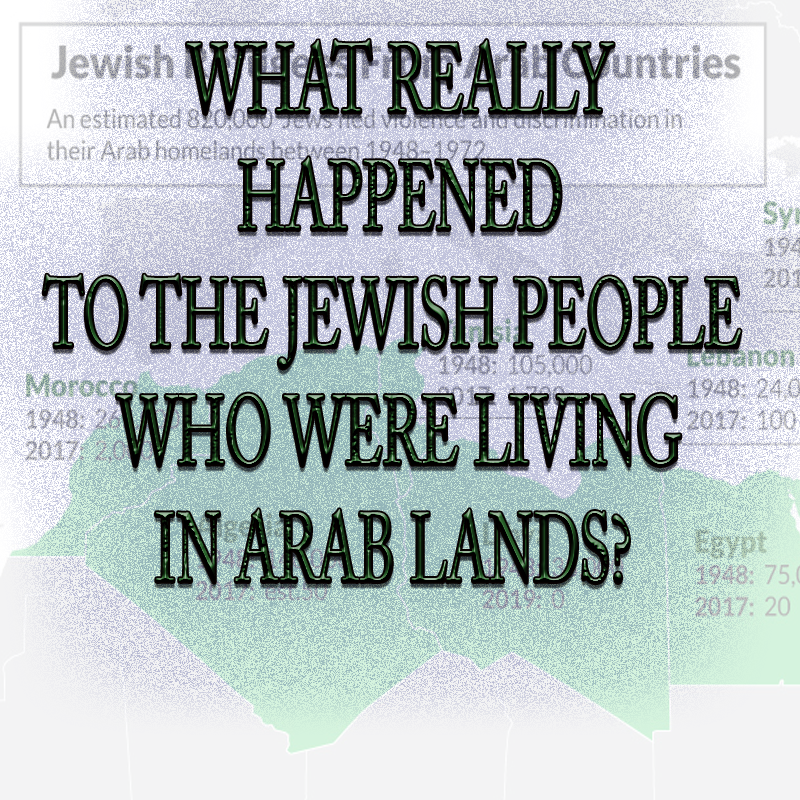 What really happened to the million Jews in Arab lands?

What really happened to the million Jews who lived in Arab lands? Unfortunately, so many people spread lies about what happened to those Jews – chiefly as a way of propping up a false Palestinian narrative – that most people have no idea of the truth or the scale of the disaster. They see the lies spreading online, but simply do not have the material they need to counter the disinformation campaign.

The ‘Jewish problem’ in the Arab lands

A simple fact: in the 20th century almost a million Jews resided in ancient Jewish communities spread throughout the Middle East and North Africa.

Another simple fact: at the end of the 20th century, there was almost nothing left.

At the root, although there is no ‘catch-all’ that tells the story of every single Jew in all of the Arab lands – it was belief in the supremacy of Islam, rising Arab nationalism and Islamic antisemitism that all played their role. Whilst it is true that Jewish history in the MENA region was better than the Jewish experience in Europe, this is hardly a difficult benchmark to pass.

Peaceful co-existence’ involved the subordination and degradation of the Jews. The status of Jews as Dhimmi (second class citizens) meant that life was unpredictable; sometimes calm – sometimes violent – but the Jewish experience was always left to the whims of the local rulers.

The 19th century brought about the partial collapse of the Ottoman Empire – and this signalled dark times for the Jews. Pogroms – violent riots against Jews – began to reappear with alarming frequency. The Arab response to the vacuum of power left from the weakness in the Ottoman regime, resulted in power struggles – and both rising Arab nationalism and religious extremism left Jewish blood flowing down city streets. All this upheaval started occurring long before modern Zionism entered the equation.

A key point must be made. The idea that before Zionism, Jews had lived in peace in Arab lands is an absolute myth. For a full history it is worth reading the Lyn Julius book ‘Uprooted’ .

The need for the whitewash

By the early 20th century, the attacks on these Jewish communities were brutal. Much of it was government driven, with increasing anti-Jewish legislation appearing throughout the region. But there was also a lot of anti-Jewish violence on the street. This all spiked dramatically when Israel was founded but had started long before. The growing hostility was to drive the ethnic cleansing of every major Jewish community inside Arab lands. The creation of nearly a million Jewish refugees.

For those pushing an anti-Israel agenda – and whose entire narrative is built around the non-necessity of Zionism and the tragic existence of Palestinian refugees, the true history surrounding Jewish refugees creates five key problems:

Another *key difference* between the two – was what followed their respective departures. While Israel looked after Jewish refugees and absorbed them – so today they no longer exist – the Arabs disgracefully *CHOSE* to weaponise the refugees. Instead of absorbing them, they locked them into camps and deliberately perpetuated their suffering. Many of the grandchildren of these Arab refugees still live in camps today, solely because the Arab nations wanted to keep them that way.

There is even mind-numbing hypocrisy in the way these people are treated. People still refer to a Jordanian whose ancestors fled the mandate area in 1948 as a ‘refugee’ – but nobody would dream of doing the same to an Israeli whose ancestors were expelled from Egypt. Both of these families have new nationalities – but are treated very differently.

But even all this misdirection wasn’t enough. Even with the UN, UNHRC, Amnesty, HRW and media outlets like the BBC – all playing along with the gross deception. The anti-Israel propaganda machine needed more.

The birth of an antisemitic conspiracy theory

What the anti-Israel activists did was simple. They looked at the million Jews wiped out from Arab lands and just blamed the Zionists (Jews). Like most Jew-haters – they simply hid the truth behind an antisemitic conspiracy theory. For them it does not matter than 50 years before modern Zionism, Jews of the region were begging the French and British for protection from Islamic persecution. Nor is it relevant that anti-Jewish laws were set in place throughout the area.

The revisionists just airbrushed all this out of history. Instead, they created a world in which Jews and Muslims lived peacefully together and then pointed all the blame at the Zionists. In this distorted world, Jews didn’t leave of their own accord at all – nor did Muslims chase them out. Instead in this conspiracy – the Zionists ‘forced’ Jews’ out of their homes and into Israel:

The tweet above is not an oddity. Check the timeline of any anti-Israel activist – they are all pushing exactly the same myth. See for example the lies contained within the book ‘State of Terror’ by Tom Suarez, which relies heavily on these myths. A denial of horrific crimes which places the blame on the victims (today, over 50% of Jewish people in Israel – the ‘Zionists’ they are attacking – are the victims of the ethnic cleansing of which they are being accused).

The classic line goes like this: Jews had lived peacefully in Arab lands for millennia. Then the ‘white’ European Zionists, who wanted ‘non-white’ cheap labour, came and unsettled the Arab-Jewish communities by conducting a string of false flag terrorist attacks. The Zionist / Nazi cooperation conspiracy is another strand of the same demonisation campaign. The key example antisemites use is a false history of the experience of Jews in Iraq. Mainly because Zionist activists were arrested, tortured and executed for the ‘crime’ following a sham trial.

It is not difficult to dismantle the entire conspiracy because every piece of available evidence suggests that it is simply not true. Iraq had been awash with anti-Jewish violence for decades. Files in the National Archives at Kew contain examples of bombing attacks on Jewish communities predating even the Farhud (the 1941 slaughter of 179 Jews). Such as this attack on a Jewish club in Baghdad in 1938:

By the mid 1930s, Nazi ideology was widely spreading through Iraq (and much of the MENA region). The idea that Israel, which at the time was overrun with refugees flooding into the country, would be agitating for more makes no sense at all. The Jews of Iraqi left because the people and government of Iraq turned on them. By the time Iraq finally gave permission for the Jews to leave in March 1950 (and they were forced to leave all their property behind) – most Jews registered to go.

The idea that this was a Zionist plot is nothing more than victim blaming by building an antisemitic conspiracy theory.

In order to counter all these lies, we need to arm ourselves with the truth. So what happened to all the Jews in Arab lands really? The truth is an escalating anti-Jewish pogrom that engulfed the entire MENA region and led to the ethnic cleansing of the Jewish Communities from Morocco to Yemen. This is a nation-by-nation breakdown:

The real story of the Arab Lands

These are *just some* of the key events that took place across the region (approximate figures):

From Morocco to Yemen there was clear, consistent, and undeniable persecution. Zionism did not send all this over the edge – the Arabs did this all by themselves. Zionism, thankfully, left the fleeing Jews with a safe haven.

Support my research for 2022

My research is unique and hard hitting. It also depends on community support. I have many ongoing projects looking at antisemitism wherever it hides. Help me fight antisemitism in 2022 – there is so much work to do. Please donate if you can.

184 thoughts on “What really happened to the million Jews in Arab lands?”