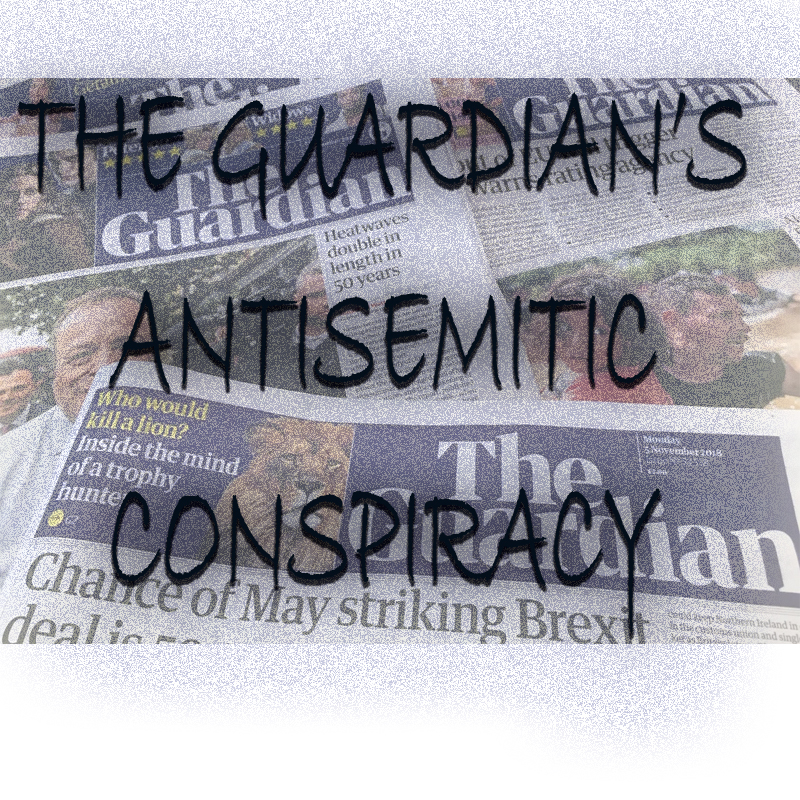 Under attack from the conspiracy theories of the Guardian newspaper

It has long been known that the Guardian newspaper has lost the plot. It is not just anti-Israel obsessive (see examples 1,2,3,4,5). The Guardian jumped down the rabbit hole of ‘woke’ ideology and today provides oxygen for every toxic hard-left movement that exists. But the Guardian also runs smear campaigns to undermine those who oppose its friends. How do I know this for sure? Because they just tried to pull that stunt with me.

On Thursday I was contacted via my website by Stephanie Kirchgaessner from the Guardian. She asked if I was available to speak to her about the 2019 report I wrote on Amnesty International:

This was a fascinating approach. I consider the Guardian ‘hostile’ to the west, the UK, the US, liberal thinking, free speech, Jews, Israel, and Zionism, so it is odd they would contact me about anything. When I wrote the report – a 200-page detailed investigation of Amnesty’s anti-Israel bias that was supported with almost 600 footnotes – the Guardian completely ignored it. Kirchgaessner is also based in the US, and I am a simple lad from Essex.

The problem my detractors have when they take me on, is that there is nothing more to me than I have made publicly available. I am just a Jewish guy from the outskirts of London with a keyboard, a ‘particular set of skills’, and a fetish for outing antisemites. I have absolutely nothing to hide. Which means that when I am contacted by a journalist, I am able to talk freely about anything that is related explicitly to me.

Yes, I know that what I say can be twisted and so on – but there can be no meat to anything they put together. Which is why my research has been respectfully covered by everyone from the BBC to the Times and the only outlets that do run hit pieces on me are those such as the Electronic Intifada, Mondoweiss and so on. I am a target only for lying antisemitic rags.

I gave Kirchgaessner my number and awaited her call.

As always I did a little ‘due diligence’ before the call. I read that Stephanie Kirchgaessner spent fourteen years at the FT before joining the Guardian in late 2014. She is the Guardian’s ‘US investigations correspondent’. I found nothing of note about her on media watchdog sites such as ‘CAMERA‘ and ‘Honest Reporting‘. I did learn that she has been a lead in the investigation into the PEGASUS spyware and the Israeli company behind it – NSO.

NSO did provide a link, however tenuous. Kirchgaessner is deeply involved in the investigations into PEGASUS and so is Amnesty International. But surely, nobody would be so insane that they would link me to NSO? It would take a dark conspiratorial mindset to tie an independent fighter against antisemitism in London, to a hi-tech spyware company in Israel. This is in the ‘David Miller’ sphere of conspiratorial nonsense (Miller is a sacked Bristol University academic who loves to draw massive web-diagrams about ‘Zionist’ money, influence and power). Surely, I thought to myself, the Guardian do not swim in the same sewer as the real haters. Oh, how wrong can someone be!

We spoke on Friday evening (Friday evening is always a good time for a journalist to call someone Jewish). I informed her that I consider the Guardian a hostile newspaper. This cut through any need for unnecessary pretence and she got straight to the point. She wanted to suggest that my Amnesty report had been funded by NSO in order to ‘retaliate’ for the Amnesty investigation into NSO.

In my head I was falling off my chair in hysterics at the thought that my hand-to-mouth research has ever been seriously ‘funded’ by anyone.

The call ended with Kirchgaessner arguing about dates, in a strange (and exceedingly silly) attempt to protect her thesis – because she needed to convince herself that my interest in Amnesty only came about after Amnesty’s interest in NSO. *sigh*. Does anyone not know about Amnesty’s blood libel over Jenin in 2002? One of my closest activist friends, Richard Millett, was even physically threatened by Amnesty’s anti-Israel obsessive Kristyan Benedict at an event in 2011. I have a decades-long list of complaints. Kirchgaessner is obviously totally ignorant of the subject she is trying to build a conspiracy around.

During the call Kirchgaessner went on to tell me two other things of interest. One, is that she is friendly with (and she used the words ‘full disclosure’ as she told me this) – Agnès Callamard, the Secretary General at Amnesty. The other nugget was that the idea that my report was somehow an NSO funded attack – was also part of Amnesty’s own considerations.

This means that following discussions with her friends at Amnesty over my report – a Guardian journalist came hunting in order to try to discredit my report by linking my motivations in fighting antisemitism to NSO money.

Let me get this out of the way first. The ludicrous notion that my research has ever been ‘funded’ by anyone is risible. As most following this blog know, it is the small private donations that I receive through PayPal and Patreon that have allowed me to continue to do what I do (and a sincere thank you to every single person who has contributed). And it is *only* these donations (and a very supportive and forgiving wife) that have *EVER* enabled me to fight antisemitism.

The word ‘commission’ has been applied to three pieces of my research out of respect. ‘Partially subsidised’ would be a more apt description. On three occasions (the Scottish Palestine Solidarity Campaign, Amnesty and Ireland), I have been given ‘pocket money’ as I write a lengthy report. I have always chosen my targets and *EVERY* report I have written has been my idea. I have *never* undertaken a project because someone else wanted me to do it.

Also – as a side-note. I do not care diddley-squat about who attacks NSO.

I should take great pride in the fact that I can sit alone with my keyboard and single-handedly produce a report that others will think needed major funding. But sitting in her entitled and privileged bubble as she obviously does, Stephanie Kirchgaessner displays an enormous amount of ignorance.

She has no idea about British Jews fighting antisemitism. As every Jewish activist in the UK knows, there is no money here. None of us are ‘funded’. We fight because we must. I do not need a greater motivation than knowing that if I do not fight today – my children will fight a greater battle later on.

Kirchgaessner also displays great ignorance about the antisemitism we face, and again entitlement and privilege are playing their part. Guardian journalists would automatically see racism if the only child being picked on in the classroom was black. Yet Kirchgaessner cannot see the anti-Israel obsession for what it is.

This is how the far-right and far-left mirror each other. Arguing with an Israel critic is like talking to a far-right racist about anti-black racism. In a discussion about institutional racism, the racist would only want to talk about the possible guilt of the non-whites held in custody. They just do not want to see the pyramid of institutional racism that led to the arrest in the first place. The same logic applies to anti-Israel activism. Much of the antisemitism against Israel is institutionalised. In the UN’s obsession, the UNHRC’s obsession, Amnesty’s obsession, and so on. Much of it driven on the international stage by an Islamist agenda. If you are left just discussing what is seen through the antisemitic obsession (the microscope placed on Israel) – you’ve already lost.

The community of the good

Kirchgaessner is also lost in the idea of the ‘community of the good’ – the underlying cause of the Guardian’s own demise. A supremacist leftist bubble held together by an illusionary sense of intellectual and moral superiority. It is notable that whilst she contacted me about the Amnesty report – she was not willing to discuss the content at all. I doubt she has even read it. My report on Amnesty is obviously a quality document because two years on and not a single flaw has ever been found in the damning 200-page document. So Amnesty are left playing attack the messenger. Hey Stephanie – what part of the report was actually wrong?

I was also spot on in my analysis. I knew in 2019 that Amnesty was going to call Israel an ‘Apartheid’ state (from my report – page 150):

If an Amnesty employee is giving advice to Hamas terrorists (see my Amnesty report page 39) – it is perfectly legitimate for Israel to treat Amnesty as a hostile group. Many Human Rights organisations have fallen down the Islamist rabbit hole.

The Guardian have also lost themselves inside this world. They would die on the NGOs hill, protect them from criticism, and smear those who dared to question the NGO’s good name. Hence this attempt to build a smear campaign to discredit the report. It stems from a belief in ‘the community of the good’ – a community that simply does not exist.

Above all there are classic antisemitic undertones. It is about Jews, honesty, loyalty and money.

Classic antisemitic conspiracy: Jews have no agency; they can make no decisions. We are all just pawns – fifth columnists – and part of a rich global Jewish cabal.

Sunk without a trace

It is important to state that I found nothing from Stephanie Kirchgaessner to suggest she has a history of anti-Israel or antisemitic views. She simply stands on the side of Amnesty, alongside ‘the community of the good’ – and I dared to stand up and attack them. From that point – the journalist’s own misplaced confidence in the moral supremacy in which her bubble resides did the rest. It led her straight into a rabbit hole.

I am publishing this because it shows the sewer in which Guardian journalists now swim. This is how and why their reporting is so skewed. They are not there to tell the news, but rather to defend their supremacist ideology and smear its enemies. This clearly places me within the Guardian’s line of sight. They have joined the Electronic Intifada, Mondoweiss and other antisemitic rags in trying to attack the Jewish defenders.

(note: I offered Stephanie Kirchgaessner the right to respond to the above – and so far I have not heard back).