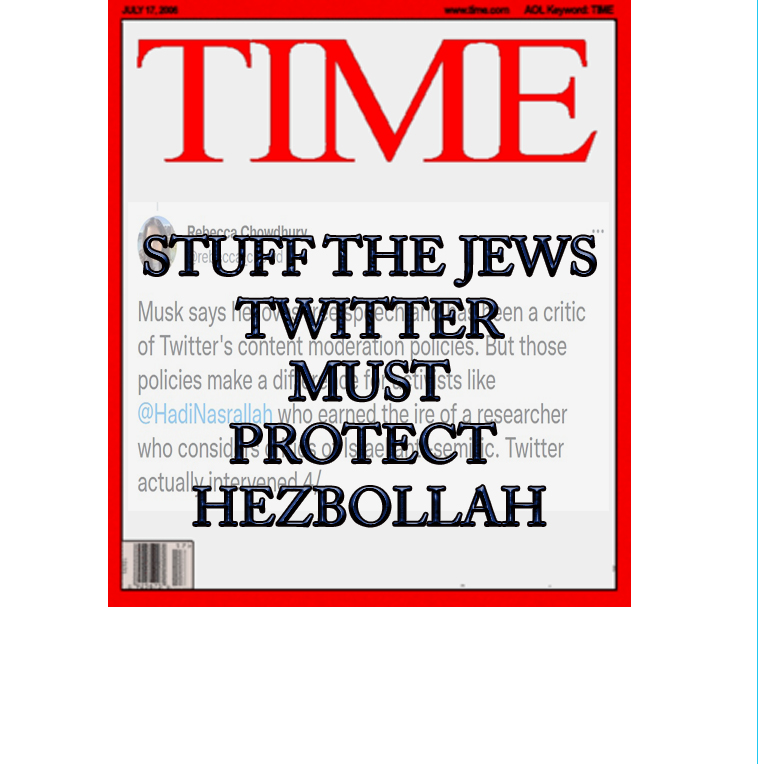 TIME Magazine comes out batting for Assad and Hezbolllah

On Friday TIME Magazine published a disjointed and badly-written hit piece. TIME used an under-qualified freelancer to write an innaccurate article that attacks me, ridicules antisemitism and even defends a Hezbollah supporting extremist. How on earth did this article ever get published?

At its heart the TIME Magazine article is part of TIME’s very public displeasure at Elon Musk’s purchase of twitter (see examples 1,2,3,4,5). Those at TIME seem to think that if you create a space in which the different parts of the political spectrum are treated equally – then the sky will fall in.

I do not want to deflect attention from the core of this piece by spending time on discussing Twitter. Needless to say I take issue with a forum in which people can freely call for a genocide of Jews, but are punished if they question someone’s pronouns. There is little doubt that Twitter’s Overton window is in desperate need of an overhaul. This change of course scares those who have enjoyed the echo chamber created by a suppression of contra voices. That is why TIME is so vocally opposed to it.

The article attacking me was published under the umbrella of ‘anti-Musk’. It argues that allowing more freedom to ‘right-wing’ voices will increase the level of harassment upon left-wing voices. TIME displays no concern at all for the abuse when it is delivered the other way around. According to TIME – it is just the left that needs protection. It seems TIME is completely happy when those it disagrees with are not allowed to speak at all.

The article opens with a heavy dose of antisemitism. It claims that Jews attack Pro-Palestinians with ‘smears’ (accusations of antisemitism) – even reaching out to their place of work or study:

The journalist Rebecca Chowdhury (more on her shortly) reaches out for a key example of this harassment – and the best she could find was me. Worse still – and digging a massive hole for herself – the example she uses was about a Lebanese based, pro-Hezbollah, Assad-doting, US-hating, propaganda agent, named Hadi Nasrallah (more on him shortly too).

I’d be interested to know what possible damage my justified ‘outing’ of Hadi Nasrallah can possibly do in his Lebanese, Hezbollah loving stronghold.

The article goes on to suggest I conflate ‘critiques of Israel with antisemitism.’ I am not going to waste time pointing out these basic accusations against me are false. The journalist is just throwing mud.

The result is an empty hit piece that relies on antisemitism to get its message across. It is disgraceful that TIME used its platform to downplay antisemitism in such an awful fashion. I would hope that either CAMERA or Honest Reporting (or both) will take this matter further. Across the west, antisemitic incidents are on the rise. TIME’s solution is to silence Jews who complain – support banning them from platforms – and to suggest that their accusations of racism are inherently dishonest. The article even opened with a clear example of the Livingstone Formulation.

Would TIME publish an article in which racism against any other minority group is treated in such fashion? Shameful stuff.

I wanted to look more closely at the journalist, but it was difficult to do due diligence here. There is nothing visible that would suggest TIME Magazine would publish an article by Rebecca Chowdhury. The freelance journalist has a short and irrelevant history of minor articles in small progessive online outlets. She had a minor and insignificant gig at Human Rights Watch. There is nothing in her scrapbook at all that suggests she would be deemed capable of writing an expert article on Middle Eastern geo-politics, antisemitism and the algorithms of a global social media website. Why on earth did TIME publish an article she wrote that targets Jewish victims of antisemitism?

Nothing about human rights abuse anywhere – except Israel of course. There were dozens of tweets attacking Israel. In the example below she pushes the ridiculous notion that Israelis stole ‘Palestinian food’. This is empty rhetoric taken from notorious propaganda sites. I doubt she would apply the same logic to Bangladeshi or Pakistani food. Did they steal their cuisines? Or is it only the millions of Israelis, descendants of Iraqi, Yemenite, Moroccan, Syrian and Egyptian Jews – expelled from their homes and settling in Israel – that she accuses of such theft? Maybe she also wants the 2 million Israeli arabs to be put on a diet of gefilte fish. This is ignorant, blind hate – pure and simple:

Chowdhury often retweets lies and empty propaganda claims about Israel, but it doesn’t end there. In the next tweet she complains because Jews had been listed as the ‘most targeted religious group in the US’. Chowdhury is clearly ignorant on the subject, and she is left pushing offensive sectarian tripe that specifically attacks Jews. Every statistical report that has emerged from the west in recent years shows that Jews are proportionally more likely to be the target of a racially / religiously motivated attack. Yet Chowdhury dismisses this struggle against racism as some type of a conspiracy because it doesn’t fit with her agenda: 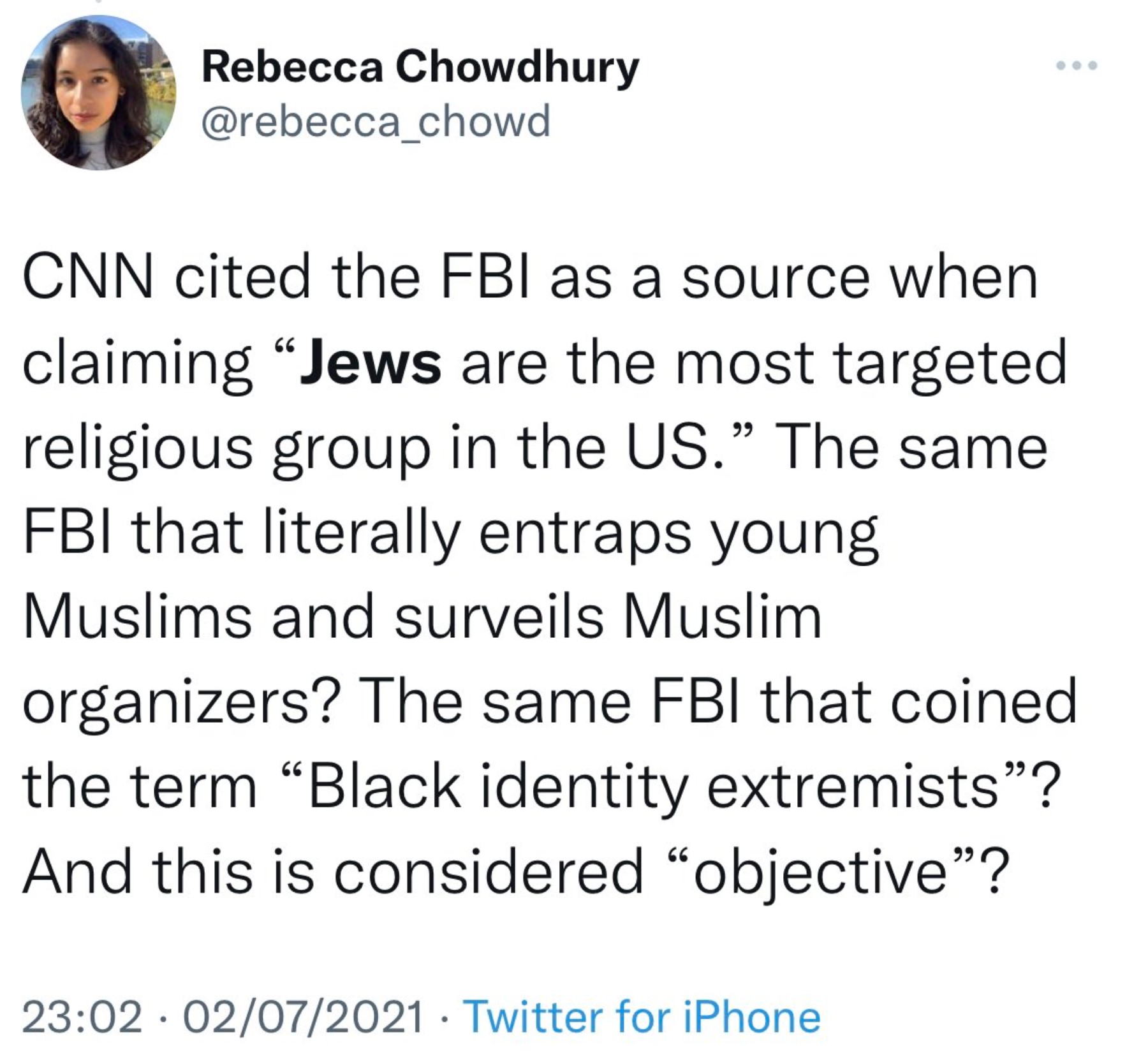 You can see the same strand of thought in her TIME article when she dismisses claims about antisemitism as nothing more than ‘smears’ wich are maliciously devised to silence Palestinian voices.

Her timeline is full of references to ‘white supremacy‘, ‘defunding the police‘ and issues about ‘colonisation‘. Chowdhury has a major chip on her shoulder about the US, and she even attacks immigrants who seek to successfully ‘assimilate’:

Rebecca Chowdhury is a child of Muslim Bangladeshi immigrants that has a problem with both the US and the Jewish state. She is a dull, ignorant, lazy, cliche.

But the moral black hole which Time Magazine created for itself doesn’t end with just publishing a lazy antisemitic attack against me. The article cites me as its key example of empty smear attacks, using the Hadi Nasrallah case to highlight how Twitter today protects ‘pro-Palestinian voices’ from what TIME suggests are empty claims. It even belittles my suggestion that he is an extremist. So who is this voice TIME magazine believes is worthy of protection?

Hadi Nasrallah had shared a video of a protest against the Israeli ambassador at a university event in London. The video had gone viral. As an investigative journalist I felt it was clearly in the public interest to expose the extremist hand behind the footage. The image I shared that Twitter wanted to remove was an image of Hadi Nasrallah proudly standing on a Syrian army tank. Note he posted it publicly on his FB page – there was nothing private about it: 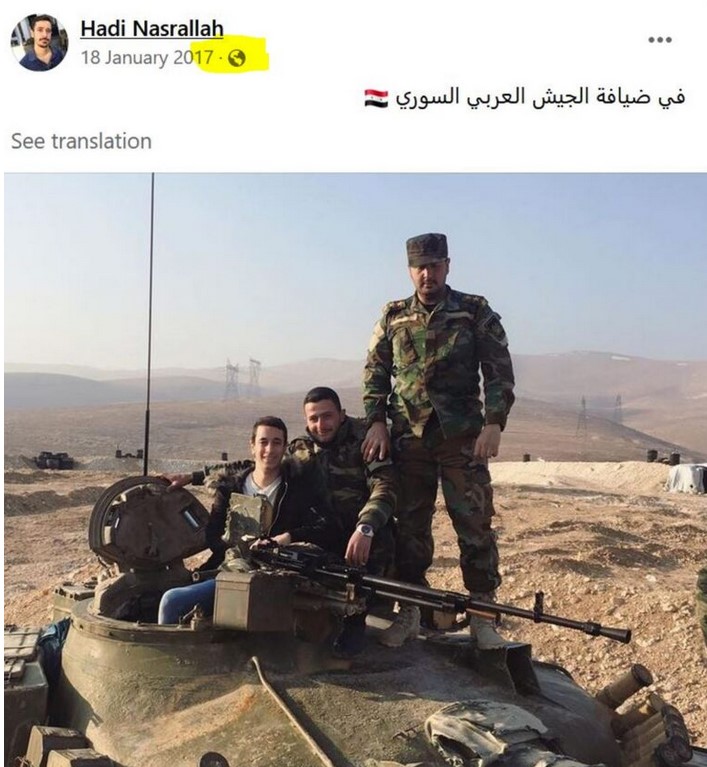 But that is only the start. Nasrallah openly supports Hezbollah. A radical Islamic terror group proscribed in both the UK and US:

His timeline is full of pro-Assad propaganda and rhetoric:

Nasrallah mourned for Qasem Soleimani the ‘king of Iranian terrorists’ when the US killed him:

And on Israel his message is clear:

Which all raises a major issue. Hadi Nasrallah’s posts are all publicly available. The journalist surely checked to see what image had been deleted (she even reposted the image of Nasrallah on the Syrian tank) – and the TIME Magazine fact checkers / lawyers must have cleared the article. They must have known about Nasrallah’s pro-Hezbollah stance. Yet their article places Hezbollah supporting Nasrallah as the victim, and I am the one Twitter needs to protect him from. Chowdhury even says this explicitly:

This did not even have anything to do with antisemitism. TIME knew what they were defending.

By using my case as an example, TIME MAGAZINE is stating that they *FAVOUR* social media platforms silencing and punishing journalists who expose information about terrorist supporters. And by air-quoting my description of Hadi Nasrallah as an ‘extremist’, they are clearly suggesting that support for Hezbollah, Assad worship, and anti-US hatred is not extreme in their eyes.

TIME Magazine and the community of the rotten

Just as we saw with the Guardian last week, TIME Magazine considers itself intellectually and morally superior. Like most of the ‘community of the good’, they are supremacists who believe that only those who agree with them should be given a voice.

This example shows how just how rotten they have become. They allowed an Israel-hating Muslim journalist to take a free shot at Jews who suffer antisemitism, and they ended up publicly defending Hezbollah propaganda.

Last week I was the target of a Guardian antisemitic conspiracy. This week TIME Magazine spread lies about me. Clearly I am having an impact. You can help support my research below.