As sixteen more Jewish children are orphaned following the brutal axe murders in Elad, we see haters celebrate all over the world. The anti-Israel position is not a ‘human-rights’ movement, nor one that just seeks a Palestinian state. It is a death cult, a movement that denies truth, craves bloodshed, glorifies violence, and worships death. It is a cult that because of its own many shortcomings, satisfies itself through the murder of Jews.

Three more Israelis were slaughtered by axe-wielding terrorists on Thursday night. Two of the victims were murdered as they enjoyed time in a local park. The third had given the two terrorists a lift into Elad – a town to which the terrorists often travelled for work.

The attack is the latest in a string of murderous attacks in Israel that has left eighteen Israelis dead:

A concentrated series of attacks hitting different towns, choosing random targets, with a varying array of weapons. Most nations would be left in semi-social paralysis as such a terror campaign unfolded, but Israel is not just ‘any nation’. Israelis have seen all this before and worse. And Israelis are under no illusions – they know the enemies are out there seeking opportunities to kill them. It is why Israel’s borders are heavily fortified, why ‘Iron Dome’ was invented, why the security fence was built, why the checkpoints were set up, and why Gaza faces strict sanctions. So when terrorists strike, most discussions are only about the security or intelligence failures that are perceived to have allowed some of the haters through the net.

Israelis live today only due to their strength, innovation, and resilience. They are the targets of an obsessive and brutal death cult.

The anti-Israel movement may be wrapped up in soft-sounding keywords, but what it seeks is the total destruction of the Jewish state. It is not interested in freedom or democracy. At best it wants Jews back at the mercy of Islamist masters – at worst it wants the Jews gone. Having understood the way to manipulate western ‘human rights’ discourse, they embarked on an intense and well organised propaganda campaign. They set about to delegitimise Israel through a constant drumbeat of lies. But whatever terminology they use today, they always mean the same thing:

Half of the demonstrators at anti-Israel demonstrations today support despots such as Assad or hybrid oppressive regimes such as Pakistan or Iran. They only take to the streets when they can demonstrate their hatred of Israel. It is why at anti-Israel demonstrations you can see many homophobic, misogynistic, violence-supporting thugs holding placards claiming they support notions of human-rights. Yes, there are traditional leftists in the crowd, but that just makes a bad situation worse. You are left with do-gooders and virtue-signallers standing alongside Islamists and anti-Jewish racists – all crying out in unison for the destruction of the Jewish state.

The left ethically imploded when it adopted the Palestinian cause. They may as well have physically taken the left’s moral soul and injected it with pure cyanide.

And when Jews lie brutally murdered in the street, we can see many of these toxic thugs actually celebrate their deaths. Like when sweets are handed out in the streets of Gaza: 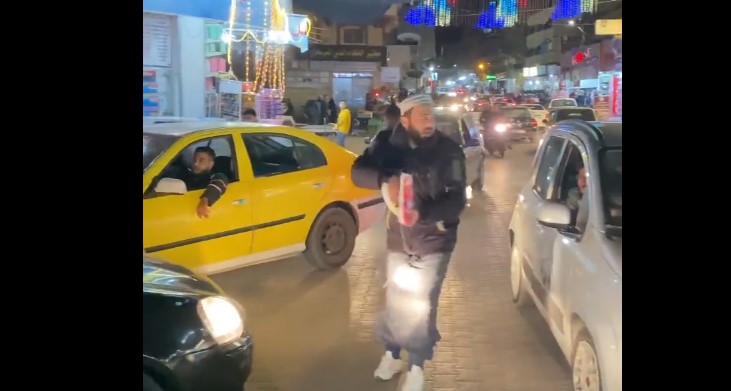 But it is not just those in Gaza or Nablus who celebrate. Social media swarms with hate.

When Israeli radio presenter Yossi Davidov posted a message of grief on Facebook following the Elad attack, the response was predictable. In saying the response was ‘predictable’ I open up a divide between what is normal for everyone else, and what is normal for Jews. When innocent civilians are slaughtered in city streets by terrorists, there is normally near universal grief. When Jews are killed, the laughter tends to drown out the measured sympathy of our allies. In 2021 there was a tragedy at Mount Meron which left 45 Israelis dead. Within six hours of posting about the event, Al Jazeera had received over 30,000 responses – over 10,000 of them were ‘laughing at’ or ‘loving’ the tragedy. The most ‘liked’ comments under the post were the most vicious.

In the end, Jews that post about their heartbreak tend to be swamped by people who are glad Jews have been killed. Only with Jewish suffering do Jews end up needing to limit who can respond to their posts (as Yossi Davidov had to). Such is the level of hate against Jews in the world.

A cult of real people

And before anyone deflects, most of these are not ‘trolls’ or bots, they are real people. Nor do they all live in Jordan or Algeria. Some are living with us in the west. Like this guy from Chicago, USA:

Mouhanad Rahami was educated in Chicago, attending school, college, and university in the city. Yet he actually celebrates brutal axe-murders. From the emojis he uses we know that he sees it as a sign of the movement’s ‘strength’. In the image below (on right) we can see him helping to lead an anti-Israel protest in Chicago: 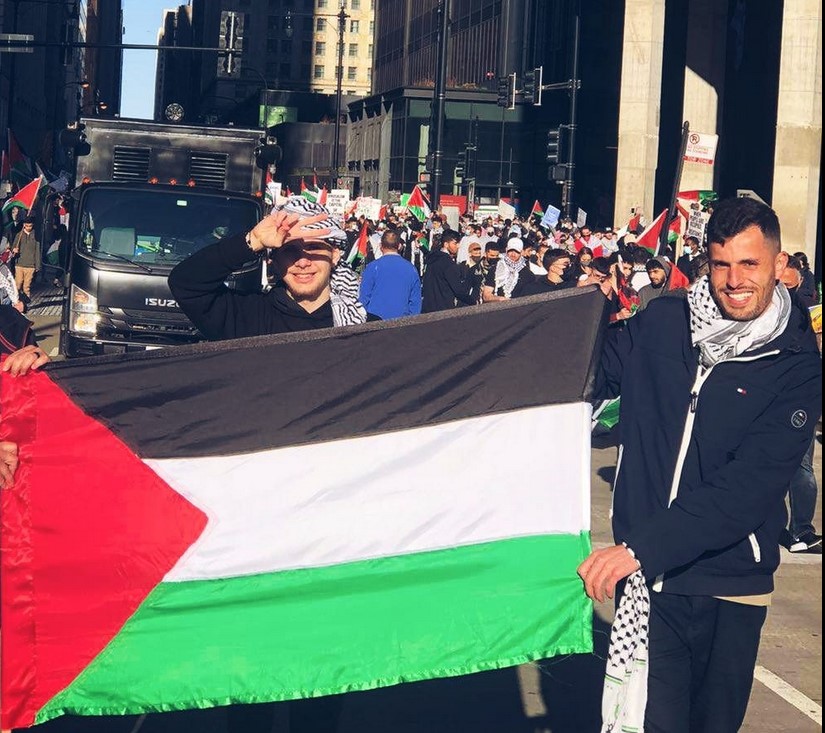 He is a real, living, human being. The world’s leading NGOs will even look at the image above and tell you he is a ‘human rights activist’.

Clare Spaulding at the Chicago Tribune disgracefully called the Chicago event ‘a call for the end of bloodshed’. Miles Kampf-Lassin posted a tweet about the event which went viral. He called it a ‘march for justice in Palestine’. This is how anti-Israel demonstrations are always described.

They are nothing of the sort. They are not a call to end bloodshed, nor a march for justice. These marches are the embodiment of a movement that seeks to disempower Jews and leave them vulnerable within an environment that is both violent and hostile towards them.

People who celebrate the death of innocent civilians are not human rights activists. They are part of a death cult. 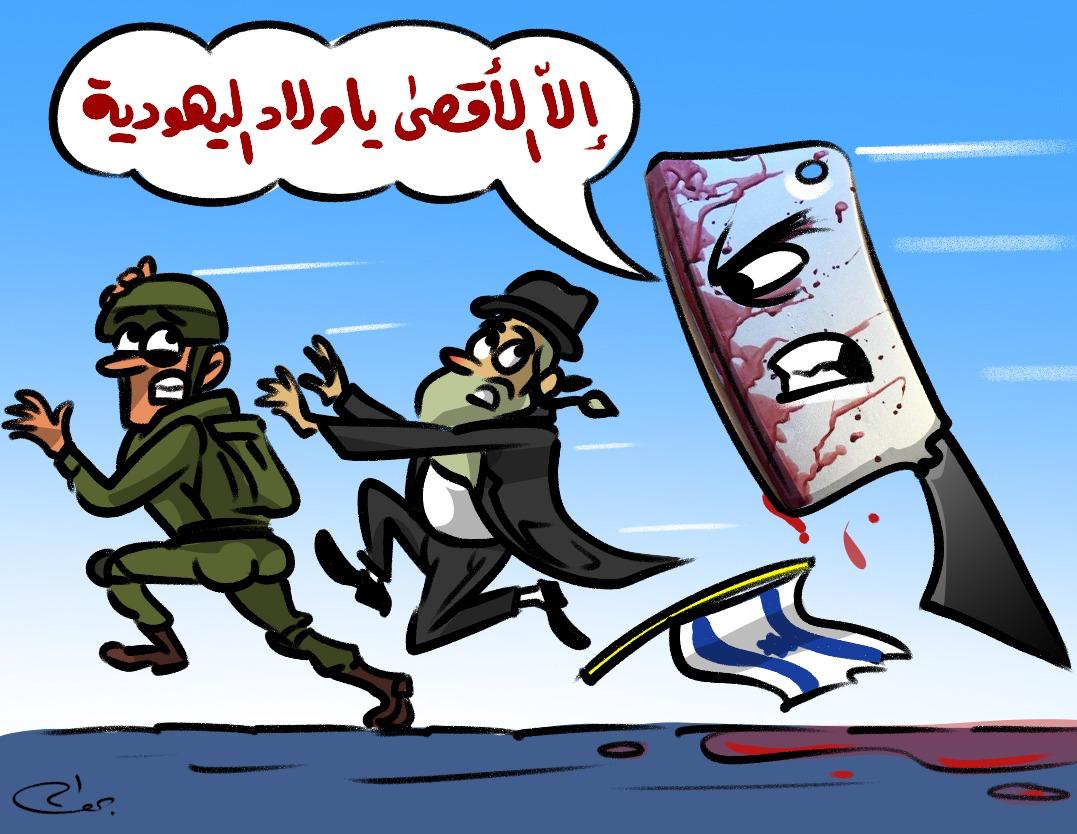 There are trolls too of course. But behind them are just people who prefer to laugh at dead Jews through a cloak of anonymity. We see examples such as this twisted Twitter account, which depicts an axe doing battle with ‘3 Zionists’:

It is not an insignificant minority

The naive do-gooders will claim these extremists are just a tiny minority. But the truth is that there are far more people who want to kill Jews, or support those that do – than there are actual Jews.

Many of those waving the Palestinian flag will claim they only want peace. But for all their words, there is not a single current anti-Israel activist who feels that this obsession with Israeli blood, this murderous intent, is enough for them to stop their support. If they say they oppose extremism whilst waving the Palestinian flag – they still support the violent cause it represents.

Every major post about the murder turned into a celebration. Uri Gobey’s post on Facebook became inundated with pictures of axes. Hananya Naftali received 179 ‘laughing’ emojis on his post. In under an hour, I counted tens of thousands of disgusting signatures – either through comments or emojis. And this is even before I looked to see what is taking place on Twitter. This vile tweet, posted within hours of the attack, received 1632 likes: 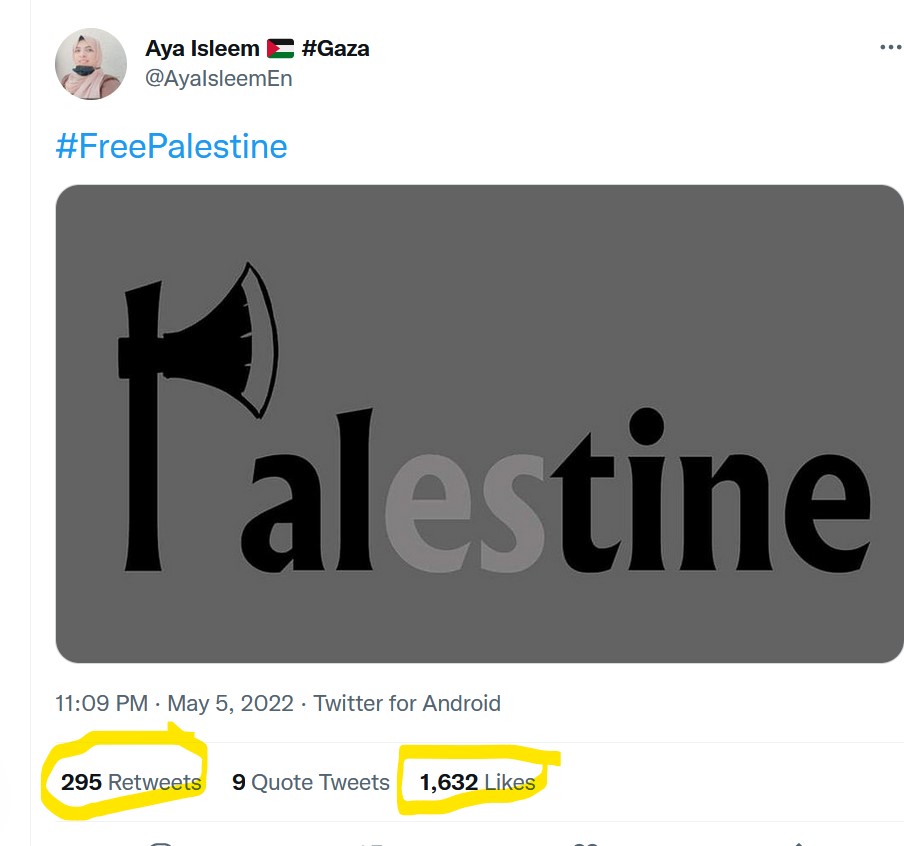 None of this would exist without support from the west. UNWRA’s schools, Palestinian textbooks – all paid for with our tax money. Palestinian children are openly taught lies – a twisted version of history that strips from Jewish history any ethical justification. It renders Israelis as sub-human and worthy only of death. Last night I watched a Hamas propaganda film ’11 days in May’ at a picture house in London. The decontextualised narrative suggests Israelis are ‘homocidal maniacs‘. It is raw Gazan propaganda spreading freely on our streets. The movie – which does nothing but spread hate – has UNICEF’s stamp of approval on it.

While governments of third world countries cannot afford to dig wells or place solar panels – Hamas channels its money into rockets and tunnels. Why is a place that is not even a fraction as desperate as others – given so much funding – if all it does is use it to try to kill Jews? How is it possible that the money continues to flow towards them?

You’ll have to ask the myriad of NGOs who persistently set up campaigns to get people to divert their charity money towards Gaza. There are more NGOs helping Hamas build rockets than there are NGOs helping fund new wells in Niger (see Israel – Niger). And perversely, periods of Hamas-driven violence always sees more money flow into the Gaza strip. The leaders in Gaza see the material benefits of murdering Jews. This is the world that Jews have to live in.

The silent and willing allies

And then there are the death cult’s allies. Organisations, movements, and individuals. From Amnesty International and Human Rights Watch to the Teachers Union, Church groups and political figures.

You know the type – each and every one of them posts endless manufactured anti-Israel propaganda when Israel kicks squatters from a tent, but there is total silence when Jews are slaughtered in the streets.

It does not matter what the reasons for this are. The end message is the same – a drumbeat of dehumanised Israelis spreads deeper and deeper into the mainstream.

As Amnesty deliberately and falsely labels Israel an ‘Apartheid state’, they turn every murdering Palestinian terrorist into a ‘Nelson Mandela’.

Those two Elad terrorists who were captured on Sunday morning, will now be financially secure for life. The PA – funded by the west – will make sure their families spend out their days in comfort. Pro-Palestinian groups, with their placards calling for the release of ‘all Palestinian prisoners’ – are going to be on the street calling for their release.

In areas under Palestinian control, children are taught to want to kill Jews – while in the west, people send money to help ‘Palestinians’ succeed in their ‘struggle’.

Let us call it what it is – a death cult.