On Sunday I went to watch a movie called ‘Eleven Days in May’ at the Crouch End Picturehouse. The movie is about the May 2021 conflict between Israel and Hamas. In the end I sat for almost 90 minutes and watched raw propaganda from Hamas – a proscribed terrorist organisation – being shown as ‘truth’ in a cinema in London.

Here is the story.

I am not going to talk much about the movie itself. The film presented stories surrounding Palestinian ‘children’ who had lost their lives in the conflict. We saw their parents, or siblings who spoke about how wonderful the child was, and how much they were missed. Often we got to see archived footage of the child. Heart-breaking stuff – but then it was meant to be.

The aim of propaganda is to mislead, often through misdirection. The movie wasted no time at all in setting the stage. If you follow the movie’s script, Hamas fired seven rockets at Israel – and in response Israel bombarded Gaza with indiscriminate fire for eleven days – killing dozens of children.

That isn’t what happened in the real world but the film doesn’t want to give any actual ‘truth’ to the audience. So there is no mention of the 1000s of rockets Hamas fired at Israel (which is why the conflict went on for eleven days) or of the targeting of Hamas leaders – which is why some of the children were tragically caught up in the conflict (you do not get to choose who your parents are).  There is more -the weakness under homes caused by Hamas tunnels is not referenced. Nor does the film tell you that many Hamas rockets fell short – killing children as they did so. All we get to see are dozens of dead children – all murdered by Israel (we are explicitly told in some cases children were targeted) because Hamas fired seven rockets.

The Jewish Chronicle, Jonathan Hoffman and Israellycool have all written about the factual errors in the film – which is why I do not need to expand on it here. In some cases even the ‘children’ themselves were misrepresented by the film. Have a look at those articles if you want more detail on that.

Hamas have the western left sussed

Hamas have the western left sussed – they really do. Whilst anti-Israel activists like to talk about Israeli ‘hasbara’ – the real propaganda experts here are the radical Islamic terror groups. The Islamic University in Gaza has units dedicated to turning students into Hamas propaganda stars. There is a factory in Gaza and it is churning out Hamas activists masked as journalists, charity workers, NGO staff, medical experts and endless ‘human rights activists’. Hamas propaganda training ensures the image is clean enough to dupe a western audience.

That is how movies like this come about. People in the west often have no idea what is going on. And they do not actually go to Gaza – instead they are completely dependent on the non-existent integrity of the Gaza crew they have partnered with. It works in a similar fashion to a news crew. The runners, researchers and photo-journalists operating in Gaza are the ones who actually put the documentary together – all under the watchful eye of the pro-Hamas Director of the Gaza based media house. Those in the west rubber stamp what they receive because they really do not have a clue as to how it was put together.

Take the Co-Director of this movie – Mohammed Sawwaf. It took me just a few minutes to find that this guy is a hard-core Hamas fanboy. Why didn’t those involved in the film in London – or the film company that decided to show the film – or the sponsors of the film like UNICEF – even bother to do the tiniest bit of due diligence before green-lighting this production?

As the Jewish Chronicle article pointed out. Mohammed Sawwaf is no ‘peace activist’. He has celebrated the launching of rockets against civilian targets and called for the destruction of the State of Israel.

His father, Mustafa Sawwaf, was a key Hamas propagandist – and for a while was editor-in-chief of a Hamas run newspaper. Much of the Sawwaf clan appears to sit in the Hamas camp – as does Mohammad Sawwaf himself.

In 2012 Mohammad attended a Hamas celebration on the 25th year since the terror group’s founding. 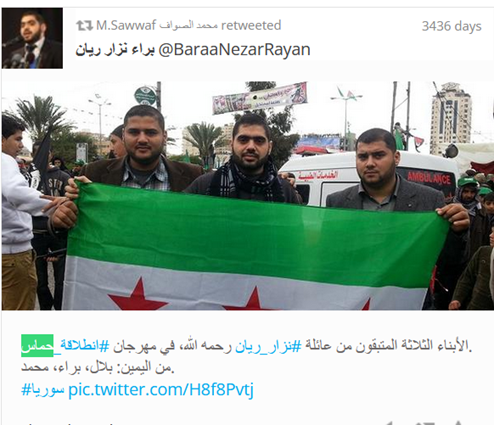 In 2011 on Facebook Sawwaf posted the message ‘May God have mercy on Abu Hassan Shamaa’:

Abu Hassan Shamaa was a founder / leader of Hamas, head of its ‘shura council’ and he died on 10 June 2011.

Sawwaf Wrote a reverential piece about Ahmed al-Jabari (Abu Mohammed), senior leader and second-in-command of the military wing of Hamas, the Izz ad-Din al-Qassam Brigades. He republished this on his FB page, when al-Jabari was killed by Israel in Nov 2012. And posted his own grief-stricken message

The message reads “but our condolences are in you, O Abu Muhammad, that you have fulfilled a wish that you have longed for, and your firstborn son “Muhammad” preceded you for it 9 years ago’. (He is referring to the killing of al-Jabari’s son in 2004 by Israeli forces. This is all about dying for the cause and Jihad.)

Everywhere you look on his timeline there is Hamas – right up until this Tuesday morning, when he appeared on Al Aqsa TV – the TV station that Hamas set up as their propaganda arm after they took control of the Gaza Strip in 2006.

The naive west is being conned

Gaza is a propaganda powerhouse and the naive fools in the west just do not see it. The Islamic University in Gaza runs courses for shaping Hamas journalists to be ‘visibly west friendly’. They get told exactly what to present – which keywords to use – and how to appear as a ‘human rights activist’.

Sawwaf cannot hide himself because of the deep family ties to Hamas royalty – but others only have to play innocent on a carefully created profile page on FB – and they are hugged.

Take Salah El Haw – the Director of Photography for the film. His public facing FB page is relatively clean. Scratch the surface of his family and the veneer falls apart His wife Raja Ayesh has a thing about dead Jews. She openly posts Hamas videos with ‘love hearts’ above them. The post she shares carries text that calls them ‘the terror of the Jews‘. 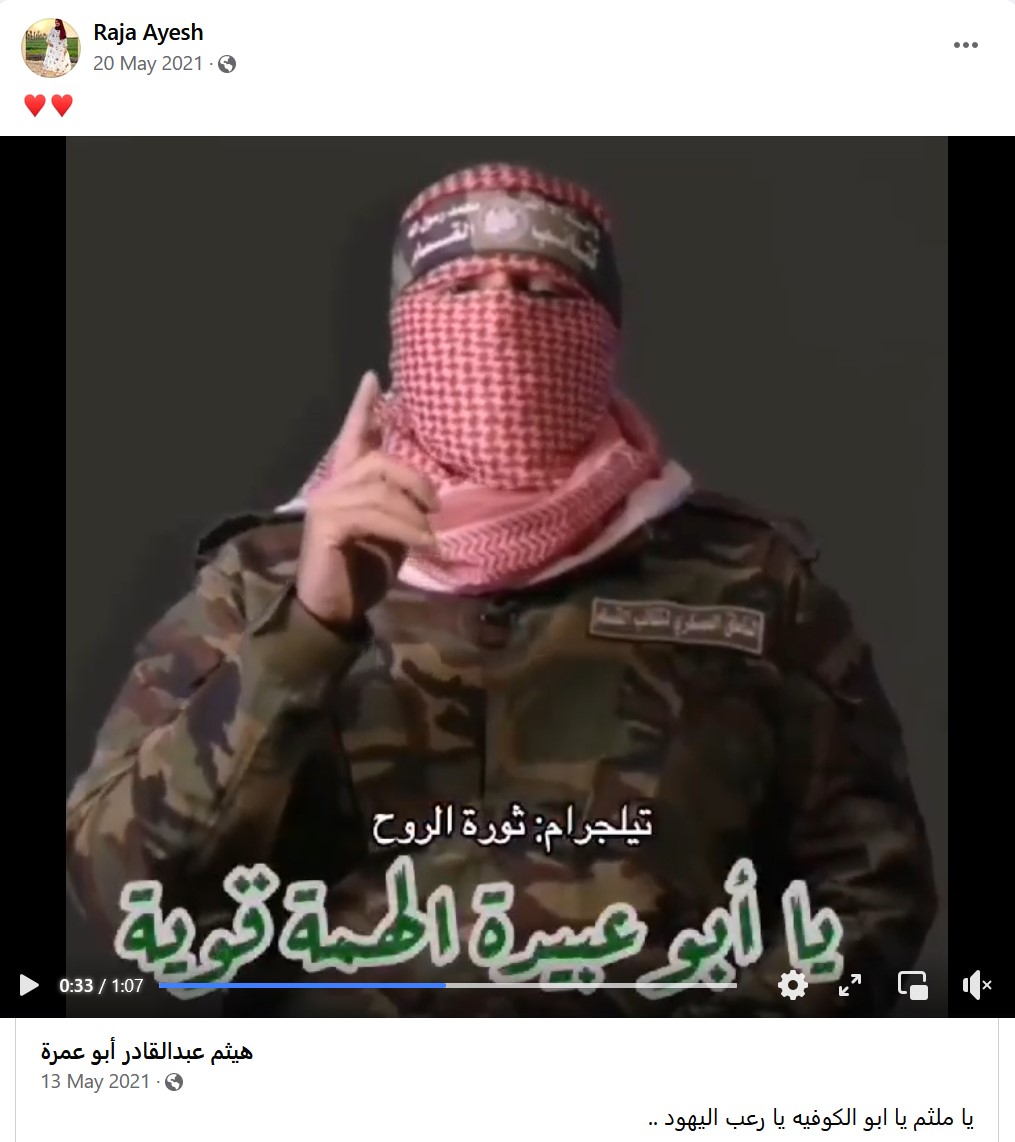 And just so there can be no mistake here. On the evening of 29 March 2022, a terrorist attacked and murdered five innocent civilians in Bnei Brak. Shortly afterwards Raja Ayesh posted this message on Facebook:

I found plenty of others connected to the film or to Sawwaf who stand alongside Hamas and support violence, but the point has been made. With the face they show to us – they pretend to care about human rights – but when they think nobody is looking – they are openly worshipping Hamas and celebrating the murder of innocents.

Get the Hamas propaganda off our screens

The British co-Director – filmmaker Michael Winterbottom, did not visit Gaza for the making of the documentary- which suggests that this film was created by pro-Hamas propagandists without any real supervision whatsoever. This means we are left with a movie created by supporters of a radical Islamic terror group.

The film is even narrated by Kate Winslet to give it that extra legitimacy. How she fell for this, only she can know. The empty statement she has made over her involvement is just embarrassing.

The bottom line is this: The errors and omissions in this movie are not mistakes. The careful crafting to present Hamas as the unfortunate victim of a demonic Israel is deliberate, not incidental. The fact Israeli casualties are not mentioned at all was not oversight. This is a movie put together by those who identify with a proscribed radical Islamic terrorist group.

Raw Hamas propaganda has no place being shown anywhere on our shores. It should be dealt with the same way that an Al Qaeda or Al Shabaab propaganda movie would be. Picturehouse should take this movie off our screens and all those involved should apologise for allowing Hamas propaganda to be shown here in the first place.

61 thoughts on “On in cinemas now: a Hamas propaganda movie”