Two days ago CNN produced a report that claimed that Israel deliberately targeted Shireen Abu Akleh, the Al Jazeera journalist. The facts themselves are very simple and you won’t find many of them in the CNN report. Given everything we know about the events – and what we do not – we cannot know for sure who fired the shot.

It is not about denial. Truth-seekers like me, most balanced people, and I expect the Israeli government as well, are perfectly willing to accept that in the crossfire between the terrorists and the IDF, the Al Jazeera journalist was accidentally killed. Mistakes and tragedies do happen. It is not about denial – it is just about knowing the truth.

We just do not know. And until either a video shows up which shows the shooting itself – or the bullet is matched to the gun – that will remain the case. The doubt this leaves is a perfect arena for antisemitic conspiracy theorists to jump in and fill in all the blanks. That is exactly what CNN have just done.

The backdrop to the shooting and CNN report

The entire backdrop to the shooting of Shireen Abu Akleh has been set aside. Israeli blood ran through the streets of Be’er Sheva, Hadera, Bnei Brak, Elad and Ariel. 19 citizens murdered. This led to a firefight in Jenin as Israel hunted down terrorists. This is the underlying cause of what then occured. Somehow that has all been forgotten.

Suddenly, with the accidental death of a journalist, even with 19 citizens brutally slaughtered by terrorists, Israel is the devil again.

There is much to learn from the anti-Israel propaganda machine.

The CNN report is a perfect example of what I refer to as the ‘9/11 conspiracy syndrome’.

What we learned from 9/11 is that when those two planes hit those two towers on that particular day, a unique chain of events was set in place which resulted in both towers collapsing. It was a real-world catastrophe that is impossible to repeat in an experiment. And even though we have clear footage of United Airlines Flight 175 hitting the South Tower, this still wouldn’t be enough for some.

Anti-government ‘Deep Staters’ went in search of data that they could use to prove what they already believed – that the towers were brought down by explosives and that the Jews were behind it. They built a whole science around it.

Just three of the many examples:

Reports with 100s of pages of detailed maths and science set out exactly why the towers were not brought down by planes. From there it is but a short step to the Dancing Israelis and Mossad. Those who hate the government and believe in some weird (and often Jewish led) illuminati creating a new world order, took data that was available and just built a theory around the events to prove themselves right.

CNN have done exactly the same thing here.  Marks on trees, sounds on video, and pseudo-scientific calculations. All supported by nothing more than a string of Palestinian ‘witnesses’ who are there to confirm that their enemy did whatever it is they are accused of.

Sickeningly, CNN even managed to place the blame on exactly the same group of people as the 9/11 deniers did.

Just as we cannot know how the Jet fuel spread through the conduits in the Twin Towers, we cannot possibly know where the bullets of the terrorists ended up. Without actually matching the bullet to the gun that fired it – everyone is left guessing. Which in turn makes you wonder why the Palestinians refuse to allow this process to occur. Could it be they are the ones who do not want the truth to be known?

All this means I am not going to deconstruct CNN’s vile accusation that Israel deliberately targeted the journalist. No more than I would waste time talking about the temperature at which steel melts. I know the planes hit those towers, just as I know that CNN cannot know who fired the shot. Their report was an irresponsible half-baked conspiracy theory that underneath all the talk of science – is just empty conjecture based on pre-conceived ideas- driven by the hate of some of the journalists involved.

Most of what CNN used is just a rehash of the Bellingcat nonsense published a week before. And like Bellingcat they used the bits they liked and ignored the things they didn’t

In reality it all boils down to a simple question. Are the journalists who led the CNN investigation fair and impartial, or instead, as with 9/11 conspiracy theorists, are there people involved who set out to confirm a deep bias? And it doesn’t take long to find that the truth behind this CNN accusation is that it was put together chiefly by those with a deep hatred of Israel.

Forget those CNN employees in the UK or US, who can do nothing but deal with what their information supply chain presents to them. They may or not have bias, but I cannot prove it is there. What matters are only those nearer to ground zero.

For example, a key CNN “witness” is Fatah lawmaker and former PNA Jenin Sec Jamal Huweil who said he “believed the shots were coming from one of the Israeli vehicles”. Here he is praising a recent terrorist attack in which four innocent Israelis were slaughtered: 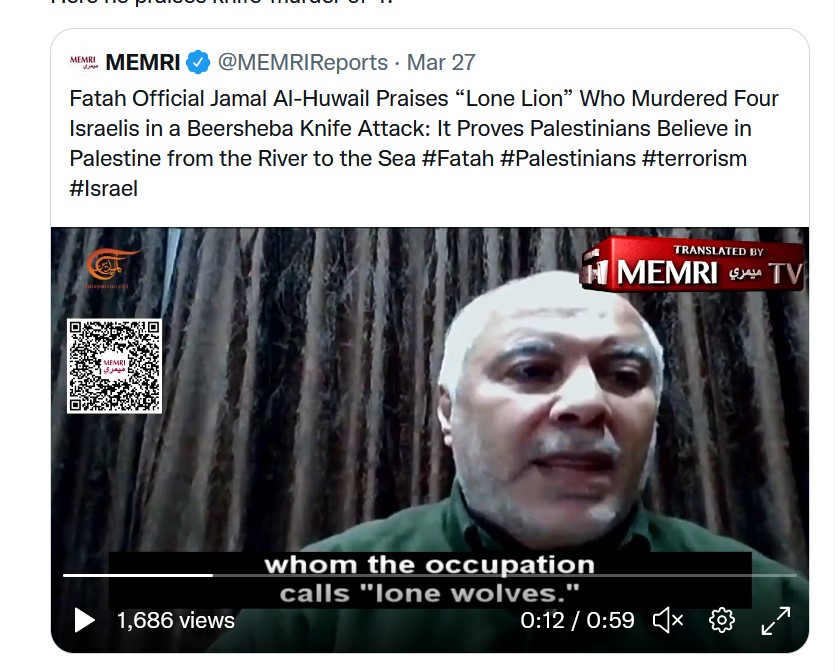 Would you trust him? In fact, all of those ‘witnesses’ who contributed evidence were Palestinians. A reminder too that for some reason they all must have been near the site of an exchange of fire between the terrorists and the IDF. Maybe some even held guns at the time.

Then there are those who put the story together.

Zeena Saifi is a CNN Producer based in the UAE. According to her Facebook bio she is from Jordan. Her Twitter feed is full of negative news about Israel.

She never misses an opportunity to push news about Israel ‘storming Al Aqsa’, or ‘shooting’ someone. And there is not one single item that goes the other way. Not a single piece of positive news about Israel. EVER. Whilst her timeline is full of news about the shooting of the Al-Jazeera journalist, she never felt the need to tweet anything about the 19 dead Israelis who were butchered in the street. In fact, in a region with Hezbollah, Hamas, Islamic Jihad, Al Qaeda and ISIS – the word ‘terrorist’ appears nowhere on her feed: 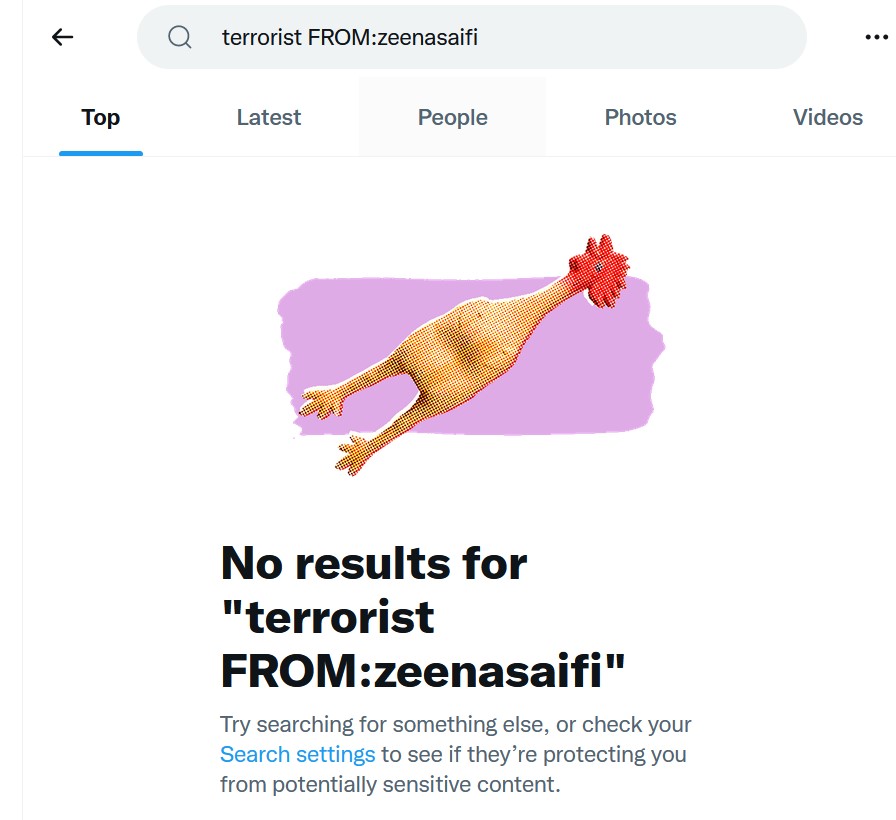 Celene Alkhadi is also in the UAE and also puts Jordan in her bio. The results from searching her timeline bring up exactly the same results as with Saifi. Not a single positive tweet about Israel can be found, but there is an endless choice of negative ones. The word ‘terrorist’ is never used and in the month where 19 Israelis were slaughtered in Israel – the only tweet Alkhadi put out was a human-interest story about a baby in Gaza.

Kareem Khadder is a Palestinian in East Jerusalem. Unsurprisingly his Twitter feed is even more one sided. Just relentless attacks on Israel. No mention of the terror attacks that left 19 Israelis dead. It is impossible to distinguish his feed from that of a Palestinian activist. He has posted from outlets such as Russia Today, Middle East Monitor and Mondoweiss:

These are the core Arabic speaking journalists CNN used to interview those Palestinian witnesses and send the information back to the London office for Gianluca Mezzofiore and Katie Polglase to rubber stamp. Is it any surprise CNN ended up claiming they’d found their ‘dancing Israelis’?

These are not journalists – when it comes to Israel they are activists wearing a press jacket. These people, just like 9/11 deniers – knew what they wanted to say and then set about constructing a faux scientific report to say it.

Many people will look at CNN and shrug. ‘So what if they engage in trashy reporting or conspiracy theory’? But this is just the small picture, and it ignores something dark and troublesome that is occurring all over the horizon. They are not alone. The NYT rely on the same type of network and is turning into a producer of hard-left pro-Palestinian propaganda where Israel is concerned. Amnesty – a world leading human rights organisation – does the same – and spends more money and time on spreading lies about Israel than it does on anywhere else. And most of them take cues from Al-Jazeera – Qatari state funded TV – in a way they never would have done, not so long ago.

And gone are the days where we could look at a Palestinian journalist’s timeline, see shares of extremist sites and hold them up as evidence. They no longer need to go to the extremist sites for their ‘fix’. Their friends are controlling the narrative in the BBC, NYT, SKY, Reuters – almost everywhere in fact where there is a newsroom. All pushing out anti-Israel stuff they can use. And today they all just share each other’s articles.

It means conspiracy junk such as CNN have just produced, looks as if it has legitimacy and goes viral. When in reality it could just as well have been made in a PA propaganda office.

The sky is really darkening for Jews in the west. Even if they cannot see it yet.