Google is the world’s leading search engine. Over 84% of search traffic across most of the free world originates from Google ( I know this because I googled it). But my own research shows that Google’s own search engine is helping to spread antisemitism into the mainstream. Here is the story:

What is in Google’s algorithm

Forget the maths that perhaps only Dr Sheldon Cooper can understand. Basically, when you type a query into Google – it uses several factors when deciding the optimal answer to your question. Your location, your interests, previous responses to the same question, and the popularity of a page are just four or the many variables. As long as it is not tampered with, Google’s algorithm reflects societal interest and bias back on itself.  This is also true of its image search. If the conversations around beautiful women online are primarily centred on or around white women, then that will be the result of a search.

The people behind Google do understand that the power it wields creates a social responsibility. They don’t want to reflect all societal bias back, because they understand that ranking some popular pages highly would promote many toxic worldviews.  But this means that Google search does have an editorial policy. Google decides what is healthy and what is toxic. Google protects some groups from spreading the hate against them inadvertently or subliminally (in returning results not explicitly asked for) by demoting the ranking of offensive pages.

Unfortunately, Google does not protect Jews in the same way.

A big h/t to Lee Kern for alerting me to this issue (Lee’s Twitter and IG).

(NOTE: an incognito window was used throughout, to avoid Google ‘filtering’ a bubble around my results, previous search history was deleted, cookies were cleaned, and search customisation was optimised to offset additional bias. Only geographical bias was not addressed as this is not relevant to the research)

A simple exercise. Type ‘Jewish people’ into Google. The results are clean and relevant. There is clearly an editorial policy of some type at work, because ‘Jews did 9/11’ and other popular antisemitic conspiracy is nowhere to be seen (unless Google recognises you want to see that kind of stuff from your antisemitic activity).

Whilst the actual text results seem to be normal, click in the menu bar to see the result of the ‘images search’. It will look something like this: 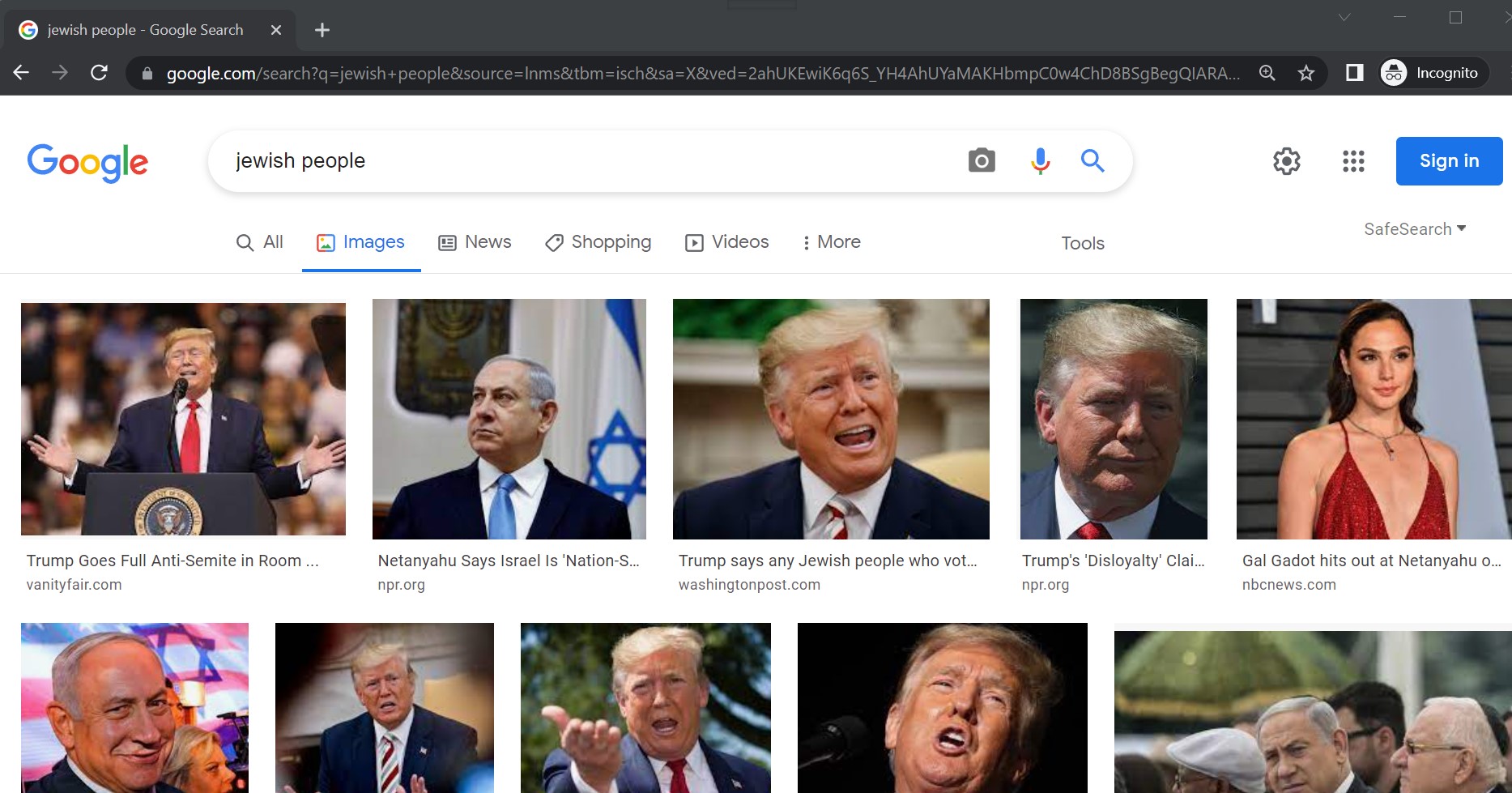 The key returns that we see immediately are Donald Trump and Bibi Netanyahu. A reflection of money, power and in the mind of many, a reflection of ‘nasty’. Even the image of Gal Gadot links to an attack on Netanyahu.  As far as I am aware, Donald Trump is not a quintessential example of a ‘Jewish person’. But it gets even worse. In just the first few results the connecting articles contain numerous attacks on Israel, Orthodoxy and Jewish people more generally. Even a Tony Greenstein article – which calls Israel a Jewish Supremacist State makes the cut.

Greenstein is an expelled Labour activist and a notorious antisemite.

To show this more thoroughly I analysed the ‘tone’ and ‘subject’ of the content of the article the image linked to. I looked at the top 30 hits. On a phone or normal sized computer screen this equates to scrolling down several times.

Of the 30 articles, 22 of the images portrayed either Trump, Netanyahu, or an ultra-orthodox figure. Almost all of the connotations of the articles attached to the images were negative. And in a world that gave us Einstein- there are images of Ilhan Omar, but none of the Jewish Nobel prize winners and innovators that changed the way we live.

For those who think this is just a normal return of such a search query, I tested a similar search.

Now try the same exercise with ‘Muslim people’. And we immediately see that we are facing an entirely different type of result:

We instantly see that we are actually looking at a Muslim landscape. But there is also no image of Mahmoud Ahmadinejad, Salman bin Abdulaziz Al Saud or Abdel Fattah el-Sisi. Nor is there Osama Bin Laden or Abu Bakr al-Baghdadi. Gone are the politics and power, and all we can see are Muslims, the majority of images are of women, and all of the images look benign.

The difference becomes even more substantial when the articles attached to the images are opened. Gone are all the negative tones we found associated to the images of Jews:

Comparison of searches on Google images

It is impossible to overstate the differences. Apart from one or two outliers, every article about ‘Muslim people’ is positive and sympathetic. The majority of the articles are about how Muslims fit into society or about the bigotry they face. Only one of the thirty articles directly deals with Islamist extremism. If you were to create a liberal check-list of articles that you wanted to encourage people to read about Muslims, you can do little better than use the list above.

In the world today the vast majority of Muslim people live in despotic, backward nations. There is no indication of this at all. And unlike the search for ‘Jewish people’, which brought up several negative articles written by antisemites or their sympathisers, in the Muslim people section – there are no comparable texts.

The ‘Muslim nation’ angle is also lost. Many of the articles on Jews, lend to attacks on the Jewish state. Most Muslim majority countries are despotic backwaters, but there is no article here focusing on the activities of Pakistan or Saudi Arabia. There is nothing about how Muslim majority nations are oppressing people everywhere, there are only articles about how Muslim people are apparently oppressed in the west. The Islamist terrorism that has shed blood in every western nation is also hardly mentioned – except as a backdrop to attack anti-Muslim bigotry.

Instead, what we have are two polar opposites and neither are real. Just as the results for Muslim people seems skewed in one direction, the result for Jewish people seems skewed in the other. It is impossible to argue that Donald Trump is the best example of a ‘Jewish person’ Google images can find. Something is seriously wrong and the two results are impossible to put alongside each other without acknowledging someone is pulling the strings.

My guess here is that Google actively ‘cleanses’ the search return for Muslims. For this reason we do not see search results that include images of Islamist terrorist attacks. But it is also clear that Google does not do the same with Jews. Instead what we see from the search returns on Jewish people is a real reflection of the antisemitism in our society. The images we see are ‘where the onine conversation is’ – when it comes to Jews. .

Before penning the article, I also tried the experiment with ‘black people’ and received a clean return of images, mostly women, children or victims of racism. And the articles, each and every one, either carried a positive message or studied racism. The search for ‘Hindu people’ gave a colourful and joyful set of images to choose from. A search for ‘Christian people’ returned a clean set of results. Even searching ‘Mormon people’ did. The outlier here is clearly with the Jews.

Jews are a tiny minority group. Those that hate us, those that seek us harm – far outnumber us. In an online world of ‘ranking’ pages by popularity, Jews are in real trouble.

What we mostly see in the search for ‘Jewish people’ is politics, power, money and quite a lot of anti-Zionist thought. The key image that is repeated over and over again is everyone’s favourite enemy – Donald Trump – and he isn’t even Jewish.

Now think about how that has an effect on the person who is doing the searching. When they search for Jews they are presented with a false and antisemitic image by Google’s own search engine. They are shown the ‘bogey man’. Google is actively reinforcing stereotypes of Jews whilst it clearly fights against the stereotypes of others.

Deliberate or not, We all know the power of the search engine and how they can subliminally shift public perception. Google’s search engine is currently helping to create antisemites – one search at a time. This must be urgently addressed.