I am currently locked out of my Twitter account. What did I do? Absolutely nothing. Hadi Nasrallah, a pro-Hezbollah, pro-Assad extremist, falsely reported my account – and Twitter bent over backwards to facilitate him. Currently I am locked out – and unless I delete the tweets that they want me to – which are clearly both in the public interest and do not break any of Twitter’s rules – then I won’t gain access to my account again.

I have no intention of deleting them. Nor should I be required to.

Who is Hadi Nasrallah

Hadi Nasrallah is a pro-Hezbollah, pro-Assad extremist. He is from Lebanon and graduated from the University of Westminster in 2017. His BA dissertation was on Hezbollah: 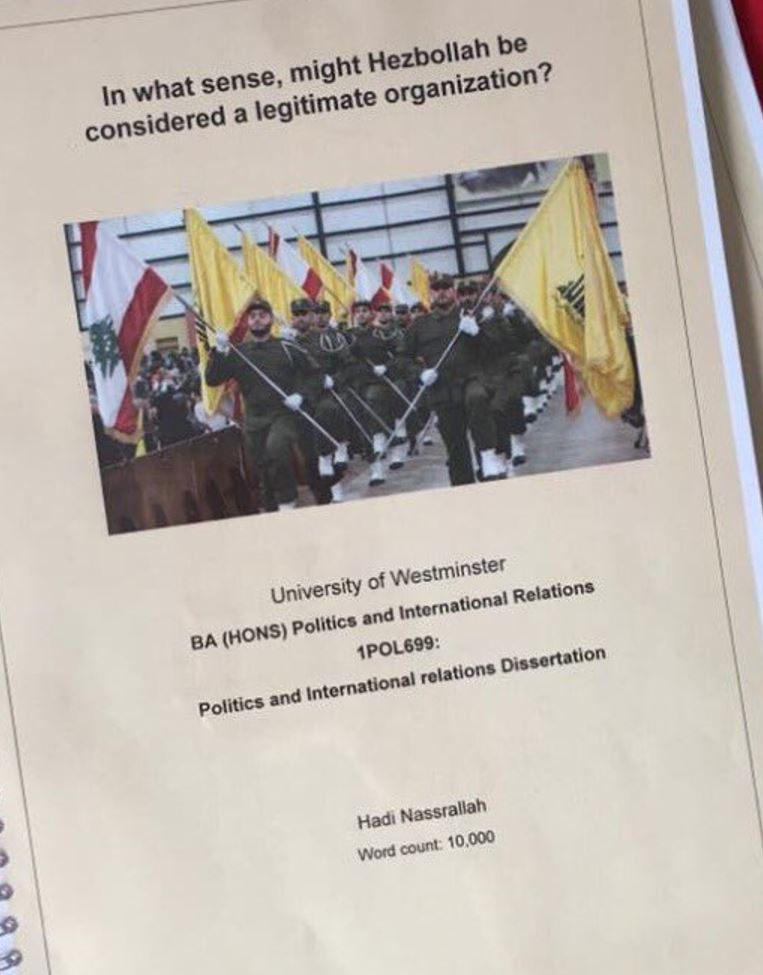 This is what he says about the terror group Hezbollah and their attacks on both Israeli and US targets:

H*zb*llah as a group of indigenous Lebanese fighters has a legitimate right to fight the Israeli occupation of their land including its support system which in that case was the American military bases in the country.

Notice how he edits the name of the radical Islamist terror group to avoid Facebook censorship. Just think. during his time at a London campus – Hadi Nasrallah was free to spread his extremism and hate. It cannot be stated often enough – we have a problem on our campuses and this is evidence that it is far more troubling than many believe. Would you want your children on the same campus as extremists like Hadi Nasrallah?

Hadi Nasrallah is a hard-core Assad fanboy. His time line is full of endless Assad glorification. I could fill a book with examples from his public posts. In 2017 he proudly posted an image of himself on a Syrian Tank: 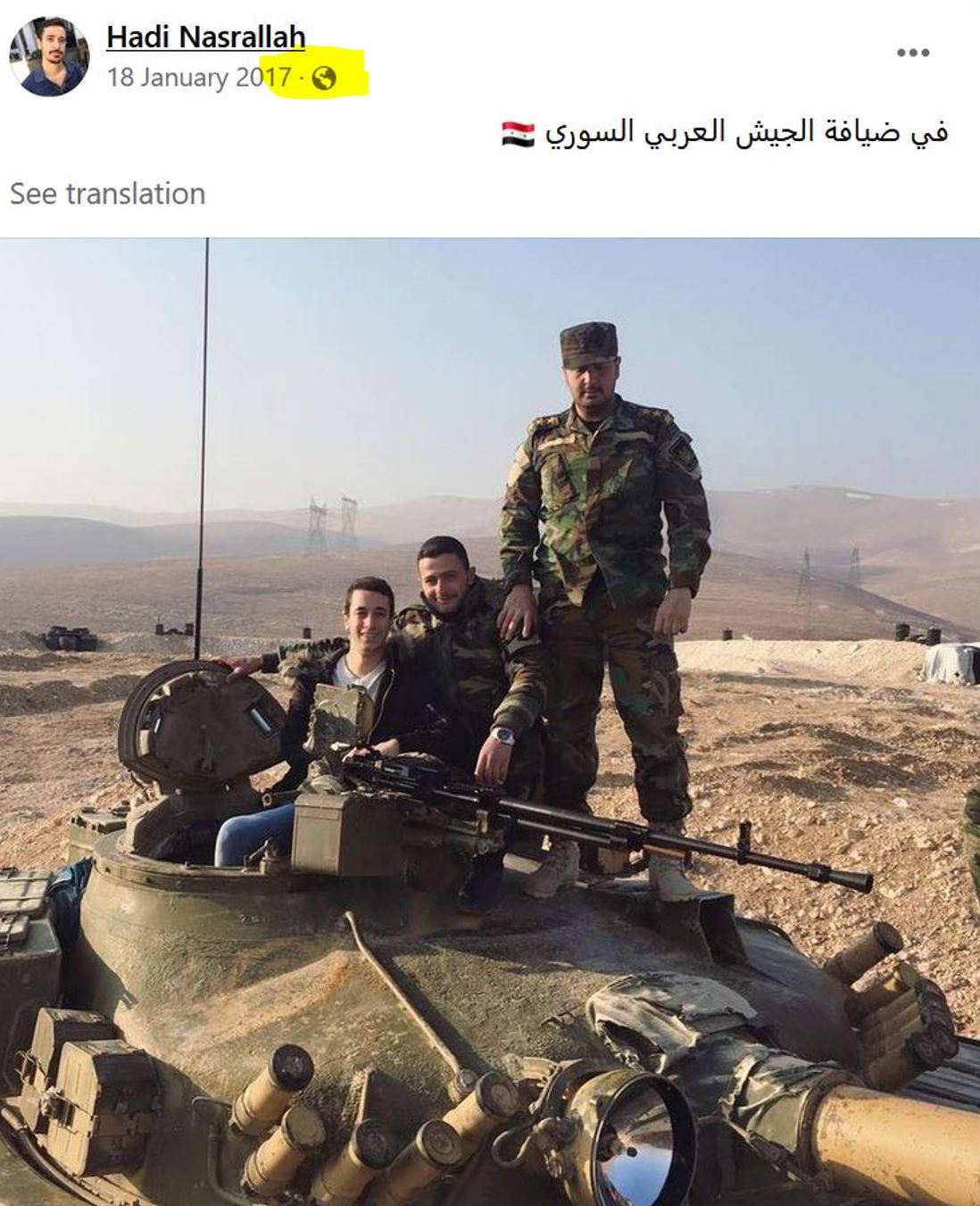 During 2016/7 – 37000 anti-government forces were killed in Syria, alongside 27,000 civilians. These were killing fields. This image was posted publicly (check the global public symbol next to the date). It is still on his Facebook page. This is important and I will return to it.

Hadi Nasrallah seems to be back in London. This is a post he made on his FB page on 23 October 2021, which appears to show him at the London free Assange demonstration: 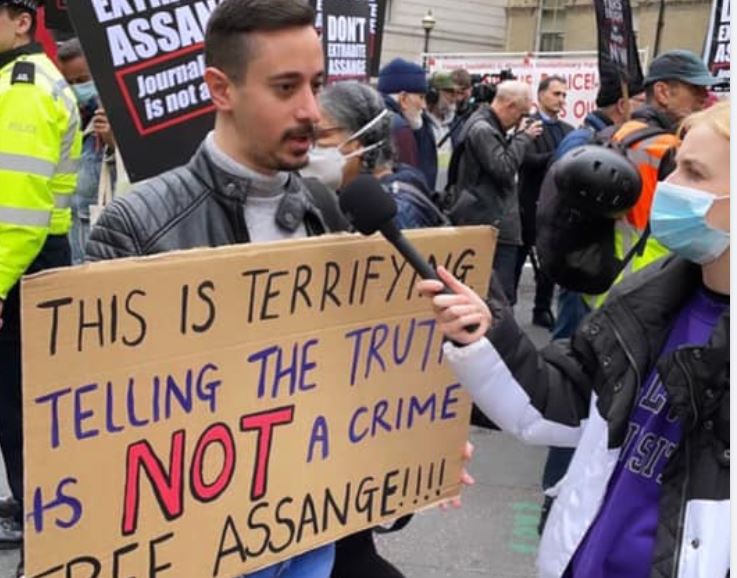 Nasrallah and the Hotovely video

As most of you would have seen, on Tuesday evening the Israeli Ambassador Tzipi Hotovely was filmed rushing to her car, to escape anti-Israel protestors who had gathered outside the LSE. The footage was first uploaded on Twitter by none other than Hadi Nasrallah. It has currently been viewed 2.2 million times. 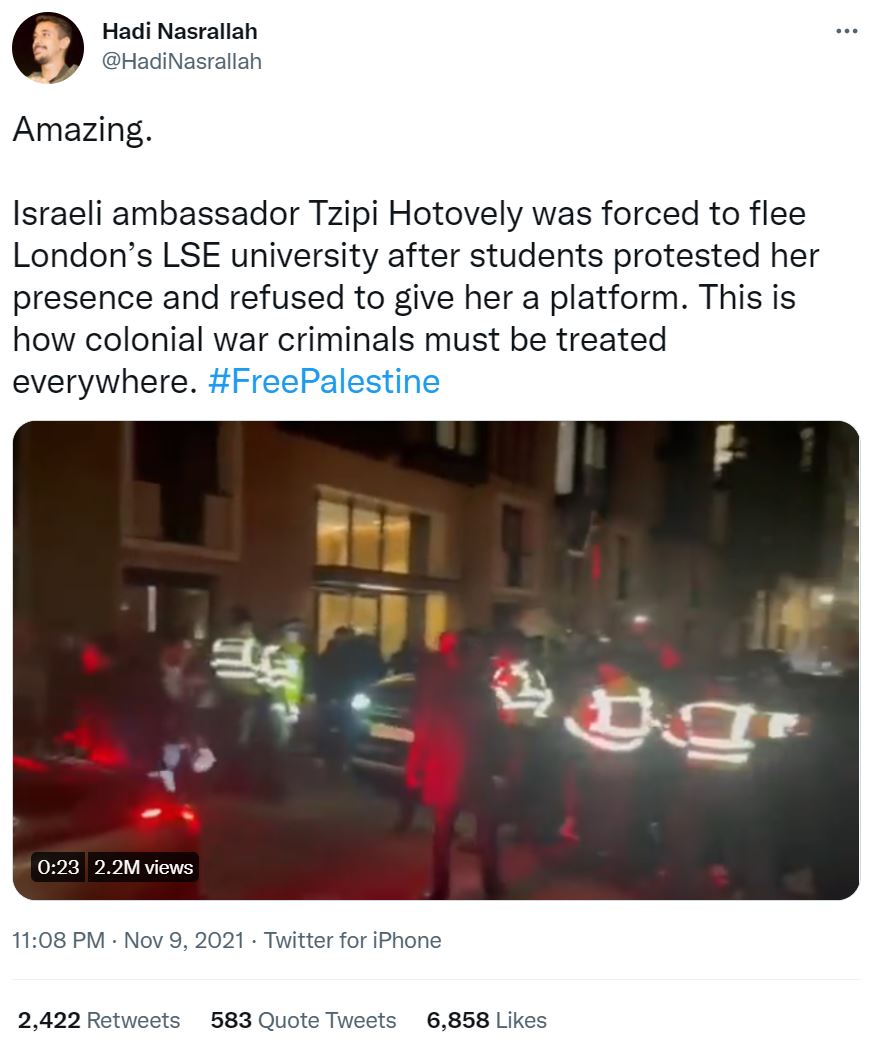 Was he there? Is he the one who filmed it? It is quite chilling to think that this type of terrorist supporting extremist could be standing just a few meters away from the Israeli ambassador.

When I saw who had posted the footage, I wanted everyone to know just what type of person was sharing it. If the arguments are about human rights and freedom to protest – then it is in the public interest to be made aware that actually, the person who shared this footage sits proudly with the Syrian army in their killing fields. So I responded to the tweet – with the image that Nasrallah had shared publicly across his social media platforms. Hadi Nasrallah promptly responded that he was proud of the image and that he had shared it publicly. See these: 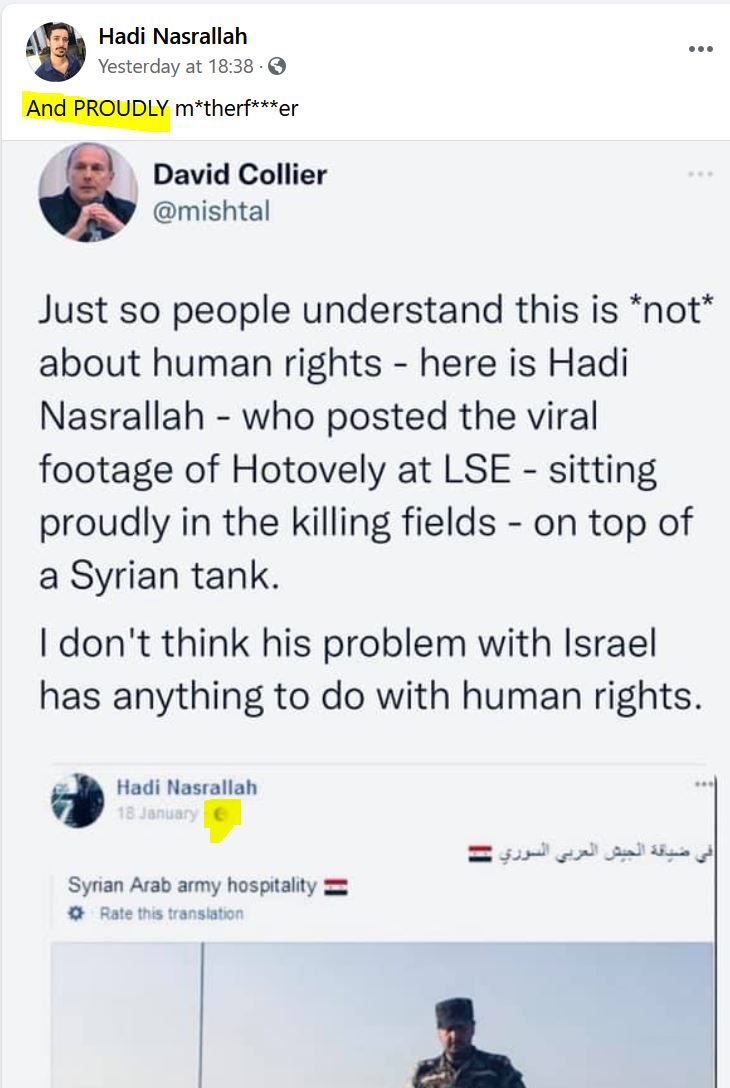 Which brings us to today. When I went to log in to Twitter this morning, I was informed I had been locked out of the Twitter platform. The reason given is that I had apparently posted ‘private media’: 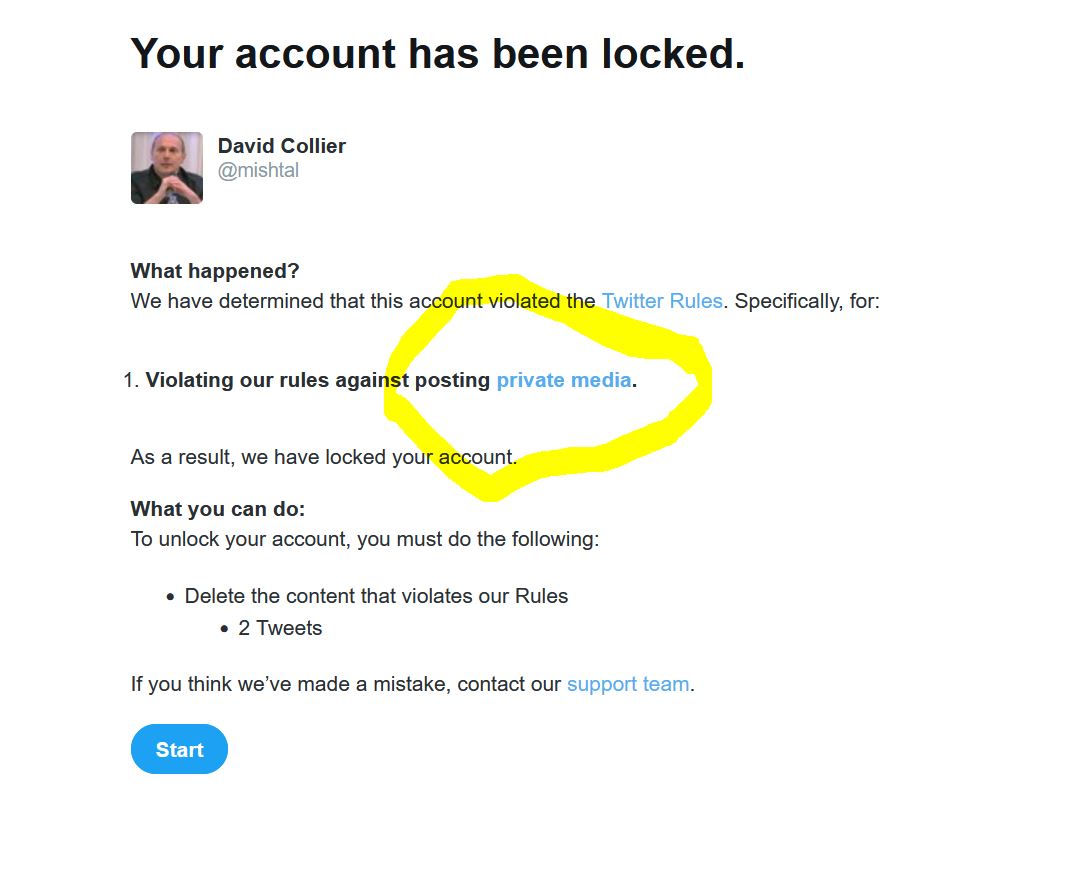 It is an absurd claim, given that the only image I posted is publicly available and even carries a symbol that shows it has been publicly shared. I could, if I had wanted to, delete the tweets as asked – but this counts as a ‘strike’ against my account – and is held against me by the platform. Or I can ‘appeal’ – which means accepting that I am locked out – until Twitter at some point in the next few days- either uphold their ban – or reinstate my account. The image I had posted was publicly available and as always on Twitter I had remained polite, accurate and unabusive. There is no justification whatsoever for separating me from 72000 followers or denying me my platform.

But it really was that easy. Hadi Nasrallah simply decided to maliciously attack my account. On his Facebook page, someone told him to ‘report me’ – so he did. And this resulted in me being denied the platform. This is Hadi Nasrallah showing the result of his report and laughing at the fact I have been locked out because of him on Twitter: 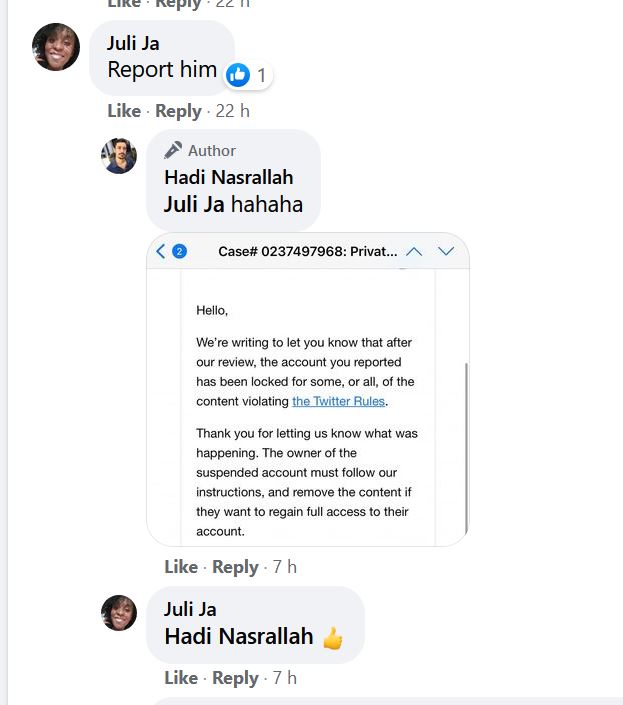 How is it possible that an empty, false and malicious attack from a Hamas, Hezbollah and Assad supporting extremist is capable of denying a platform to a front-line fighter against antisemitism in the UK? I don’t know and I think that question is best asked to those responsible. There are people running a social media platform who protect radical, terrorist supporting extremists – whilst simultaneously denying a voice to the Jews – all based on lies.

I have said it before. I need protection from Twitter from these malicious, deliberate and sometimes threatening attacks. How easy was it – for this Assad fanboy to take down my account. Why is this even possible?

2. Twitter should give me added protection by finally verifying my account. Almost everyone involved in antisemitism, Zionism and Israel knows who I am – and I am clearly a target for persistent, malicious and deliberate attacks. I need and deserve protection.

3. Finally. Hadi Nasrallah knows that these images were public – he even says so – so the report itself is malicious, deliberate, false and manipulative. Why on earth should my account pay a price for this – or be so vulnerable to such a blatant attack. Twitter should absolutely penalise the Hadi Nasrallah account for making such a false claim.

I cannot take this message to Twitter – or to my 72000 followers. Can you please help me spread the word. I want my account reinstated.

This is all part of ongoing research into the spread of antisemitism and rising radical Islamism. I engage in forensic research, much of it undercover – it is unique, hard-hitting and it goes wherever it needs to. But this research also depends on community support. The results speak for themselves and for seven years I have been exposing hate and creating headlines.