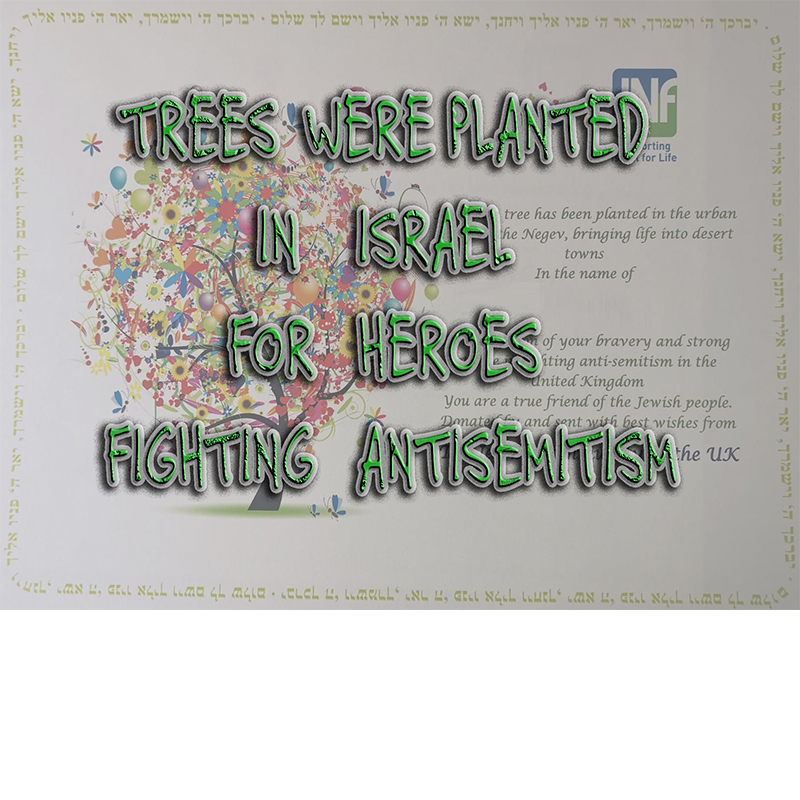 Before we were rudely interrupted by a pandemic, I ran a campaign asking British Jews to put forward names of those who they feel are standing by them in the fight we face against rising antisemitism. They also donated, to honour those fighting with trees being planted in Israel in their names. Forty trees in total have been planted and this week a certificate has been sent to those named here (and some unnamed).

The JNF certificate they received carried this message:

A mature tree has been planted in an urban forest in the Negev, (in your name) bringing life into desert towns in recognition of your bravery and strong stance in fighting antisemitism in the United Kingdom.

You are a true friend of the Jewish people.

Donated by and sent with best wishes from

the Jewish Community in the UK

The fight has a cost

Everyone involved in this battle knows that the fight can carry a high personal cost and not everyone can be publicly recognised. All those named below have given their permission to be listed here.

A few other important points:

I can tell you from the emotional response of several of those who have received certificates, this gift is seen as a special one that is truly appreciated by the recipient.

These heroes had trees planted in Israel

The twenty-five included here have all had trees planted in Israel in their name and come from a wide range of backgrounds and from across the UK. Some stood up in their CLPs and became key fighters behind groups such as LAAS. There are some of our Muslim and Christian friends who bravely speak out against hatred of Jews. There are a few politicians who stood by us as Labour imploded and paid a very real price for their stance, along with authors, actors, and journalists who have gone above and beyond what could be expected of them. Others just saw what was going on and bravely chose to stand alongside us. All of these people deserve the recognition given to them:

The unnamed heroes had trees planted too

Standing with Jewish people has a personal cost and as we have seen this can be very high. Over the years I have seen our non-Jewish allies face incredible abuse, lose their jobs, friends and be smeared in the most awful ways. For this reason not all can be named. As an example – one who received a ceritifcate has received warnings at work about their online activity and are unable to further risk their job by being mentioned. Others have been ostracised by family and friends. Where possible certificates have been sent out to these people – so they know that we appreciate all that they have done to stand alongside us.

We have to fight back against the spread of antisemitism and rising radical Islamism. I engage in forensic research, much of it undercover – it is unique, hard-hitting and it goes wherever it needs to. But this research also depends on community support. The results speak for themselves and for seven years I have been exposing hate and creating headlines.