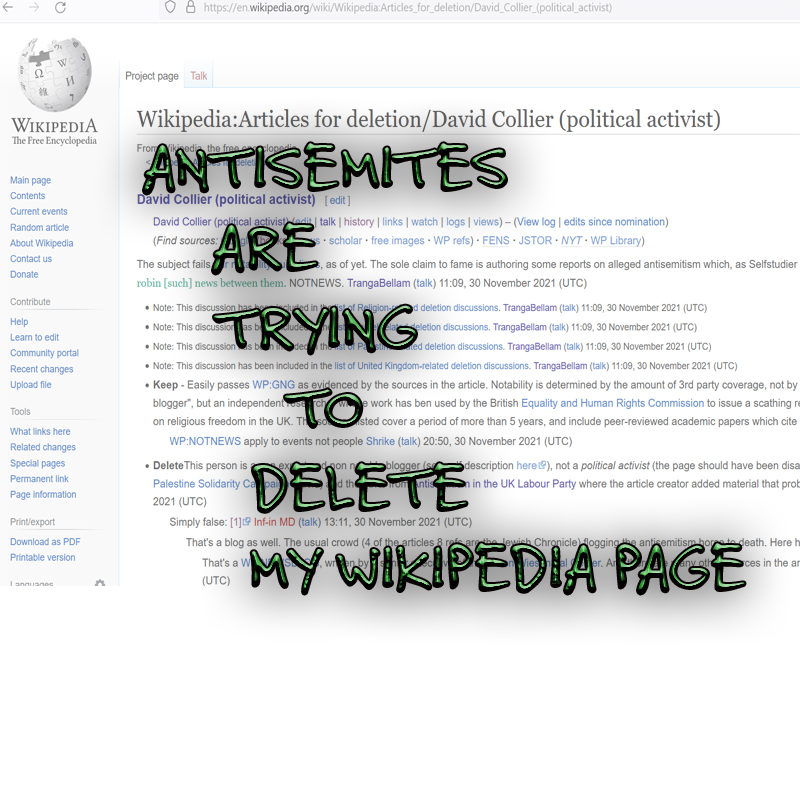 Antisemites are trying to delete my Wikipedia page

Well this was a story I didn’t see myself writing until about 7pm yesterday (Thursday 2nd). I am often digging around inside Wikipedia, researching the bias of some of the more notorious antisemitic / anti-Zionist editors. Whilst researching my latest piece, I looked at the editorial history of one of the more prolific haters to check which articles he had most recently been butchering. I was astonished (to say the least) to see that he had been contributing to a Wikipedia page about me. Up until that moment I wasn’t even aware I had one. The page was created a few days ago – and already the antisemites are swarming on the page to delete it. This is what I found (if it still exists, the page is here).

Much of the content of the page has been pretty well researched – and covers most of the key reports. But I’ve been at this for years and of course there are a few important things missing. Here are just a handful of examples not on the page:

The arguments to delete the page

I am never one for beating my own chest, but in truth there is not a mainstream media outlet in the UK that hasn’t run a piece on some of my findings. The Wikipedia page is there – my research has made headline news on numerous occasions – so what are the antisemites using as arguments in favour of deletion?

There are four key arguments from those trying to delete the page:

The first is to insist I am ‘just’ a ‘blogger’ or ‘activist’. Now whilst I do not mind the title, I am officially an investigative Journalist. I have a press card and I am an NUJ member. ‘Journalist’ is what it says on my press card. It is also how many of the media outlets refer to me. Some also call me a researcher. To be honest, I do not care what they call me – as long as they see fit to print the truth I am trying to deliver. In trying to ‘belittle’ me – so as to delete the page and my footprint, these editors have unsurprisingly resorted to underhand and inaccurate assertions.

Second is the problem they have with my research into – and criticism of – Wikipedia. Not sure why on earth they think this is relevant, but they obviously are troubled by it. In fact it is all they see – which explains a lot about why Wikipedia looks the way it looks.

They are also using the fact they think I have ‘doxxed’ Wikipedia editors in one of my articles as a reason to threaten banning the editor that linked to my blog (not just the page that offends them) from posting about Israel / Zionism. Which is patently absurd. It means that if the Daily Telegraph ran an expose on a Wikipedia editor – Wikipedia would delete every link to the Telegraph – and any Wikipedia editor posting a Telegraph article would henceforth face punishment. Either logic holds or it does not.  It also shows some of the methods they use to gang up to try to silence and remove Israel-sympathetic editors.

This is Wikipedia simply getting lost up its own backside. It is mafia warfare, full of threats, gangs and bullying, in a world in which Jews are a quintessential minority. Truly astonishing.

Third is the tired old argument that suggests I think everyone who criticises Israel is an antisemite or I see antisemitism under every rock. I don’t of course – far from it – and people who believe this either do not read my research properly or tend to be antisemites themselves. Those editors pushing this argument are free to decide which description suits them best.

The final argument – and their main one – is even more sinister. They argue that because I keep my private life ‘private’ – there is not enough substance to be worthy of a Wikipedia page and they are troubled that they do not know where I live, who my children are – and so on. They seek knowledge about my siblings and the issue of where I went to school appears to be of real interest to them (it was Beal High in Redbridge). This is all really odd. I am known for my research – just as most people producing books, research, art, music etc are known for what they produce. Their private lives are incidental. More to the point – I have been attacked twice in the street. I never mention my children by name, nor do I release images or personal information about my family. This is all deliberately withheld so as not to endanger myself or any of my family members. It is somewhat sickening that some of these people who spend their lives promoting antisemitism, should then use the environment of fear they have created as a means of further attacking me.

The antisemites who want to delete it

So who are these editors? Because the arguments to delete the page – and the arguments over the content of the page – are both public, it is easy to see the history of those taking either side. Which means if someone wants the page deleted – you can check to see whether it is an unbiased editor – or someone with an extreme anti-Zionist obsession. There were no surprises in what I found. Here were some of the key names opposing the page:

There are a couple of others listed who hang around these five almost as lackeys, but I will save those for another day.

For those that don’t know – under the hood of *some parts* of the Wikipedia engine there is little more than a bunch of people with extreme anti-Zionist bias, scurrying around trying to demonise Jews, Zionism, and Israel. Sure, there are some people pushing back the other way, but as always in a numbers game, the Jews don’t do so well. Unsurprisingly some of the editors trying to delete this page are well-known to me. Take the editors ‘Nishidani’ or ‘OnceinaWhile’ as perfect examples. I have written about them both several times before – and there can be little doubt they know it. Which raises an issue.

These are editors I have researched and criticised at great length (a couple of examples 1, 2) – who are now working hard behind the scenes to have my Wikipedia page deleted. In fact, between editing the page, arguing for deletion and adding a ‘criticism’ section’ – Nishidani alone made no less than 30 edits to the page in less than 48 hours. Did Nishidani declare a conflict of interest here? Because he certainly should have done. How about OnceinAWhile? Another editor whose bias and online butchery I have previously covered. I’ve dealt with Zero0000 before as well.

In fact all five of those listed – those obsessively swarming over my page to have it deleted – are actually named as the top five anti-Israel editors on Wikipedia by the Israel Group. Isn’t that a coincidence! I’ve seen enough to call at least three of them antisemites. All five! If this was a game of Bingo you would have to call ‘house’.

I have no idea if the page will stay or go. TBH, it doesn’t matter to me either way. What I do know is that this page is a Wikipedia page about a Jewish person in the UK who fights antisemitism – and a bunch of antisemites and Zionist haters are swarming over the page to try and have it deleted. Chances are on Wikipedia that the antisemites will win. Make of that what you will.

We have to fight back against the spread of antisemitism, the lies about Israel and rising radical Islamism. I engage in forensic research, much of it undercover – it is unique, hard-hitting and it goes wherever it needs to. But this research also depends on community support. The results speak for themselves and for seven years I have been exposing hate and creating headlines.

59 thoughts on “Antisemites are trying to delete my Wikipedia page”