I have reported on the antisemitism of the spokesperson of Scottish Jews against Zionism – SJAZ. In response SJAZ published a post on their website supporting her. SJAZ actually came out in support of a Holocaust denier. They said she posted just a few ‘antisemitic conspiracy theory posts’. They made rubbish excuses about how Jola AlJakhbeer was just ‘angry at what was happening in Palestine’. They even promoted her Jewish identity.

As evidenced below in my open letter to the group – they’ve been caught lying and supporting a far-right racist – and their excuses show us all that their primary purpose is to protect those that hate the Jews. Wait till they see what she says about black people, gays, ‘Feminazis’ and yes, Scottish people.

To Scottish Jews against Zionism – SJAZ – the handful of anti-Zionist Jews in Scotland,

I can think of few non-violent actions that are more antisemitic than your current behaviour. Not for the first time I exposed the antisemitism of Jola Hadzic / AlJakhbeer as a raging antisemite. Obviously, my message spread, because you felt the need to respond. You did so publicly, in one of the most disgraceful cover-ups of antisemitism I have seen. This letter exposes the true nature of your group.

Prior to your groups founding in 2018, I published a report on the horrific levels of hard-core antisemitism present in the Scottish Palestine Solidarity Campaign. The response of your co-founder Sarah Glynn, was to dismiss my report. What is astonishing here is that anti-Israel commentary had no part in my findings. I avoided all relevant criticism of Israel. But in her article Sarah Glynn suggested that ‘the majority of the posts.. are conspiracy theories implicating the Israeli Secret Service’. It is probably worthwhile for Sarah Glynn to take a course in antisemitism. Thinking Israel is behind 9/11 or that Charlie Hebdo was a covert Mossad attack is not criticism of Israel. When instead of criticising Israeli activity in lets say Hebron, you turn Israel into the global Jew – that sinister – all controlling – powerful demon – you are clearly engaging in antisemitism. This is pretty basic stuff.

The thing is, Jolanta Hadzic and her Holocaust denial featured prominently in the report Sarah Glynn criticised, meaning SJAZ knew all this a long time ago. Yet you still deployed her as your key spokesperson when you were founded.

You base your defence on the fact that ‘Israel’s behaviour’ made Jola AlJakhbeer do it – a blame the victim strategy. As I will show here your lies and hers are easily exposed. As soon as you scratch the surface you realise everything is a lie.

AlJakhbeer says she is from the Ukraine: 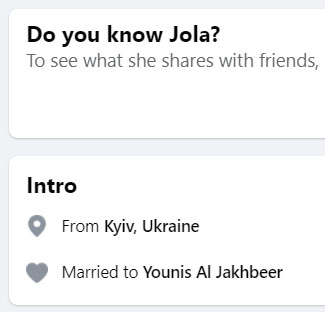 But she is from Poland:

And here it all starts to unravel, because before she came to the UK, her name wasn’t Jola at all, it was Daria. Here is Jola when she was Daria Krysta (Krzyzanowski.) on a bank by the river Wislok in the city of Rzeszowin, January 2009. 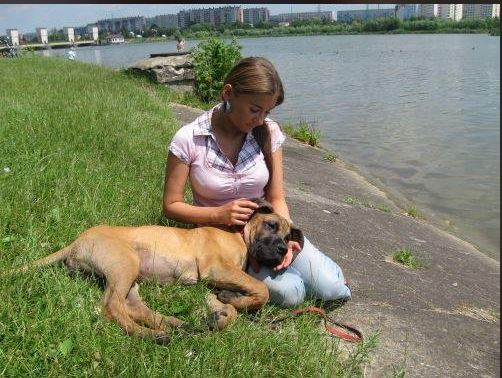 When Daria came to the UK in 2012, there was no anti-Israel activism. It was during the relationship with Muhammed Hadz, a Bosnian Muslim, that her anti-Israel slant began to form. And so did her name. Daria Krysta became Jolanta Hadzic.

But this is about far more than name changes and antisemitism. Let me show you:

In your response you dismissed the antisemitism as being related to Palestinians. Except the Holocaust has nothing to do with Zionism or Israel. The only people who attack the history of the Holocaust are antisemites, not people who ‘accidently’ go there. The first image is of the ‘Red Cross myth’ which suggests only 271,000 died in concentration camps. The second image is an article pushing the conspiracy that the Jews had planned the Holocaust ‘story’ years in advance. 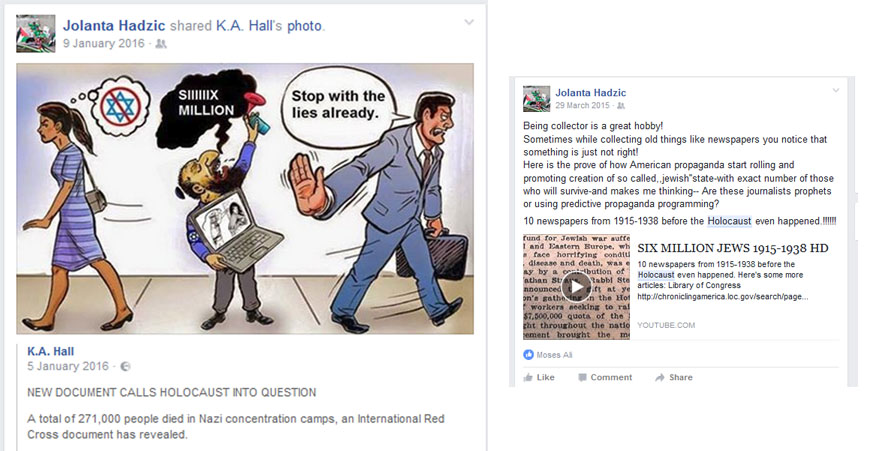 The Holocaust and the far-right

These shares were not accidents. Here is another Holocaust denial post. Note that the person your spokesperson has decided to defend is Jean-Marie Le Pen, founder of the French National Front. 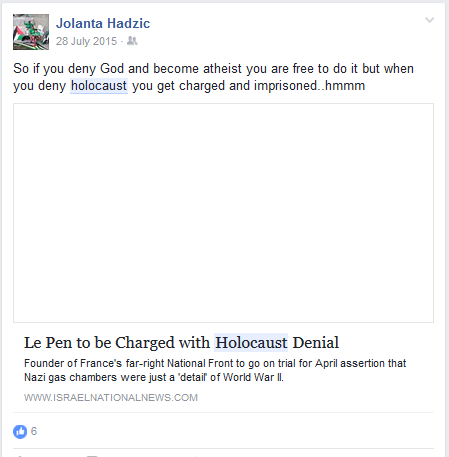 The far-right association is not a coincidence either. This is what your spokesperson Jola had to say about Scottish people – that the ‘worst thing’ about them is that they are ‘breeding’. Did anger about Palestinians before she even cared about them – force her to make this outrageous comment? 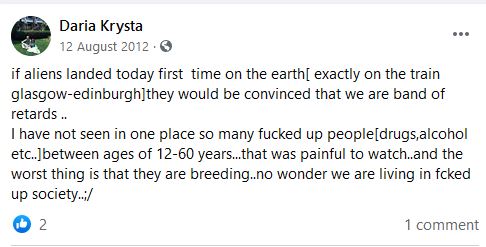 Black people should not be proud

Not content with only attacking Scottish people, your spokesperson also has a thing about black people. She thinks they should be silent and not proud:

As a Jew, I am proud of our long history of fighting alongside the black community. In your pathetic response – you had tried to minimise and dismiss the antisemitism as being a result of Jola being angry about the Palestinians. But these racist posts PRE-DATE any interest she had displayed in politics and were long before she picked up a Palestinian flag. These are also not ‘shares’, they are her own racist comments. Face it, there is nothing progressive about this person at all. She is a racist – a bigot – a Holocaust denier and a raging antisemite. It is her dislike of Jews that fuels her anti-Israel activism.

Which is why we see all the usual antisemitic tropes displayed. Such as claiming Israel kidnapped 25000 Ukrainian children to harvest their organs. 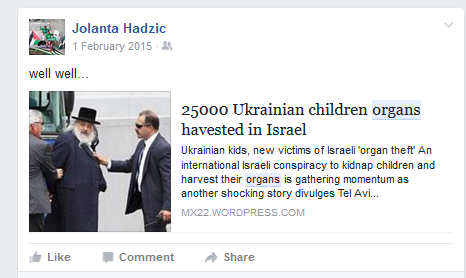 Just to prove the point there is this example. The person you have used as your public face often shared posts claiming Jews were behind ISIS. In this one she shared an article from the rabidly racist (and now de-platformed) ‘Uglytruth‘ site. It refers to *Jewish* owners selling the Bataclan theatre and works with the same logic as those who suggest Jews were warned not to turn up for work on 9/11. 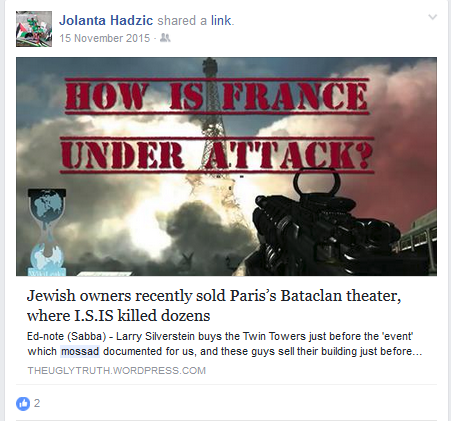 What is important here is the use of the words ‘Jewish owners’ in the headline. If, as you claim, Jola was brought up with a proud Jewish heritage, there is no way she would not have instantly recognised this antisemitism. Why would her anti-Zionism have made her share a post about *Jewish* conspiracy in the attacks in Paris – it is clearly talking about Jews.

In 2015, her partner at the time uploaded a post about Jews inventing racism. 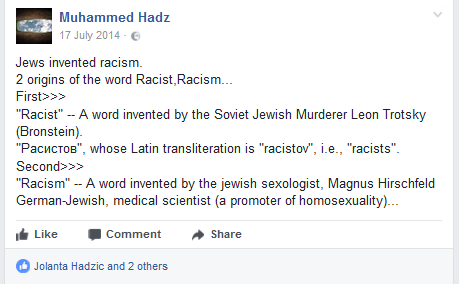 This is the type of post visible on neo-Nazi websites. Jola ‘liked the post’. Yet another post, that a Jewish person – even one of the few who opposes Zionism – would never have associated with.

The SJAZ far-right hate everyone

In 2015, Jola Hadzic / Jola AlJakhbeer / Daria Krysta shared a post in her native Polish from the Facebook page of Stop Propagandzie:

The post is about the supposed ‘cultural and religious war’ being fought against Europeans. It suggests Jews and Americans control ISIS, Al Qaeda and al-Nusra. But that is not the main thrust of the post. It is well worth reading the translation. The post rants against the progressive left and is undeniable neo-Nazi ideology. It is homophobic, racist, transphobic, sexist, antisemitic and anti-Muslim. A full set. To wrap up their argument, the author suggests only two people can save Europe from mass immigration and ‘Islamification’.  One is Putin, through strengthening Assad. The second is Marine Le Pen from France, who the author believes ‘will soon come to power’. The author revels in the fact Le Penn will stop wages for Muslims and black immigrants, forcing them back to Africa and the Middle East. The spokesperson of Scottish Jews against Zionism for a second time looks to a Le Pen as a saviour.

In your defence of a Holocaust denier, you claimed Jola was indeed Jewish. You published a quote where she spoke of the Jewish grandmother who brought her up to be proud of her Jewish heritage. Two things I have to say here. Firstly, NO JEWISH person who has been brought up by a Jewish, Polish grandmother WOULD EVER deny the Holocaust. It wouldn’t happen. She would have been brought up with tales about how awful the Nazis were. Far-right Holocaust denial goes hand in hand with her shares about Jews, Gays, ‘Feminazis’, Scottish people and black people.

The other is to point out that Jola does not understand DNA at all. She chose to publicly upload her own DNA results a while back. She did so as part of her far-right ideology to push the Khazar theory – that Jews are European converts. But her DNA match is only 8-10% ‘European Jewish. This image was uploaded to Facebook by Jola on a public setting: 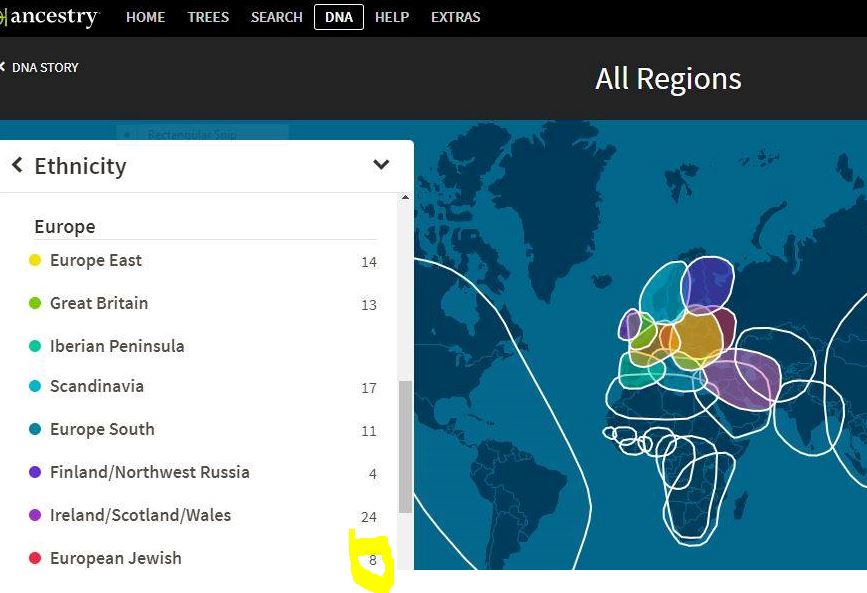 Jola’s ignorance of Jewish history led her to believe she could use this to promote her own hatred. In truth, because there were millions of Jews in Poland, and a fair amount of assimilation, Polish people with some distant Jewish heritage is a rather common thing. There are probably millions of them. Given her 8-10% return, it is possible that one of Jola’s eight great-grandparents was born Jewish but married out. Experts from Ancestry also told me that at this level it could also be statistical error. But her own DNA images prove the story of a proud Jewish grandmother raising her in the ways of Jewish heritage is total bunkum.

The reviews on Facebook highlight your problem further. You try to deceive people that Jews are split on the issue of Zionism, however we all know that this is a fraud that you attempt to pass off on the good people of Scotland. Which is why you are scared of Jewish people leaving reviews. We know that you are nothing but a handful of people – some with very fragile or even non-existent connections to the Jewish people at all. Those that are Jewish – a few outliers – are entirely disconnected from the community. Which is why when you need to publicly ask for help, you turn to the antisemites of the Scottish Palestine Solidarity Campaign. Jewish people just do not support you. 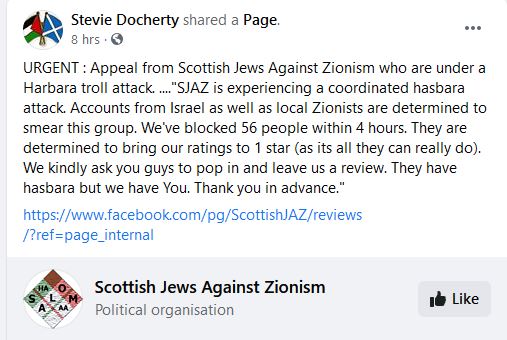 For those interested in leaving SJAZ a negative review for supporting antisemitic, racist, Holocaust deniers, they can do so on the FB page.

Your sole key activist is a rabid antisemitic who promotes far right-ideology. She is the face of SJAZ on the street and wherever she goes – antisemites go to stand with her. This post from Mohammed Tahir Ishad: 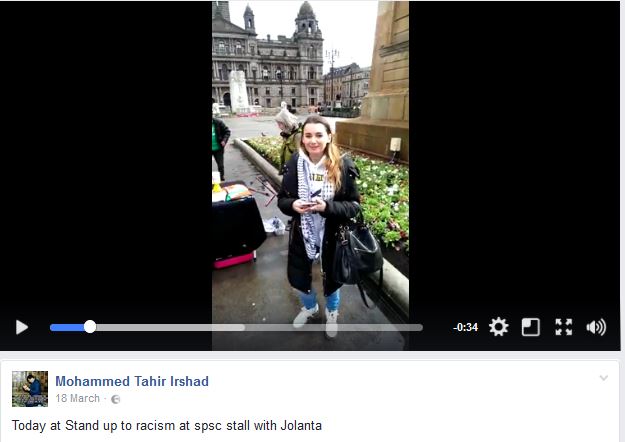 Like many of the street activists in Scotland, Irshad is an antisemite: 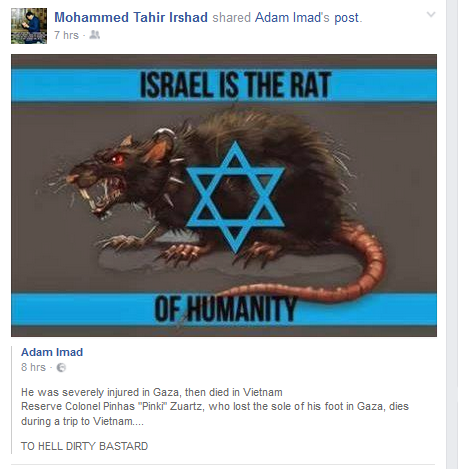 Jolanta Hadzic / Jola AlJakhbeer / Daria Krysta posts Holocaust denial, racism, supports far-right figures, pushes extreme ideology and even after you knew all this – you chose to support her with lies. You are a toxic group of individuals who do not care about Jew hatred at all. You foster it and help it to spread. Every group that aligns with you, should be shunned in every decent forum. You are beyond a disgrace.

To any actual Jews who might be part of your Jew-hostile group I say this: tonight Yom Kippur begins, the most solemn day in the Jewish calendar. It is a period of reflection. I ask you to think long and hard about how far you have fallen.