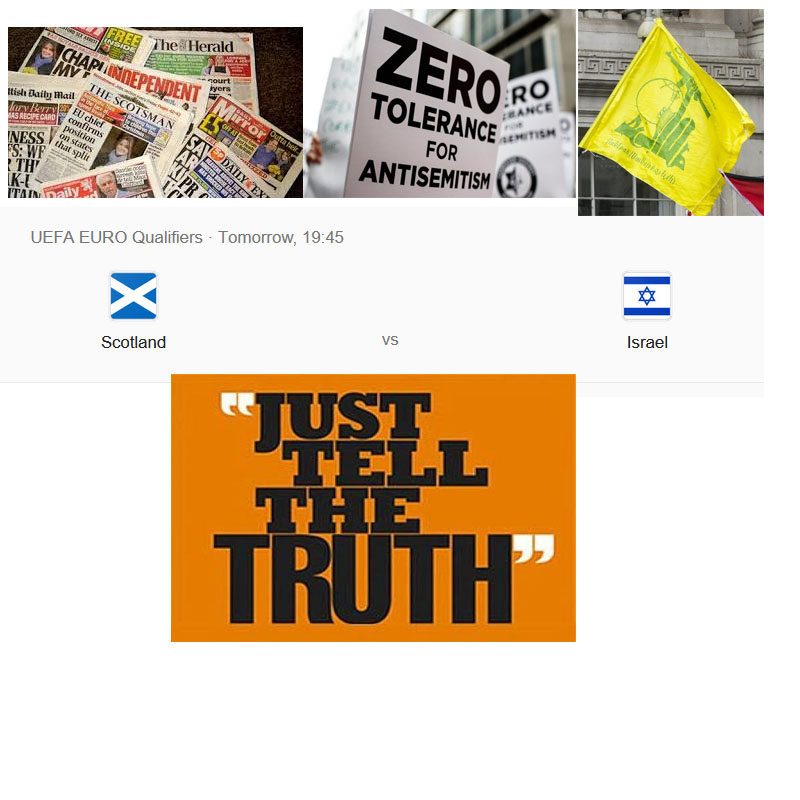 A question that will be answered this week – will the Scottish press finally tell the truth about anti-Israel activism in Scotland? To assist them, I have written this post and will tag Scottish media accounts when I share this on social media.

On Thursday evening the Israeli football team is coming to Hampden Park for the UEFA Euro qualifier play off. From experience we know that an anti-Israel demonstration will take place. We can also assume it will be misreported by the Scottish press. If Scottish media cover it at all, they will publish sympathetic articles about the protest, that are overflowing with propaganda and lies.

To help change the formula, I want to show the Scottish press *in advance* those organising and likely to attend to the demonstration. This way, when the event takes place, they will KNOW who they are writing about and act accordingly. I am certain that no Scottish member of the press would knowingly write sympathetic articles about terrorist supporters, antisemites, hypocritical Islamists and Holocaust deniers who have gathered to protest, all just because a team from the Jewish state has arrived to play in Scotland.

To the Scottish press,

These are key people who have organised or are likely to be present at the demonstration:

Mick Napier will be there, head of the Scottish Palestine Solidarity Campaign. An organisation shown to be inundated with hard-core antisemitic activists. His organisation continues to promote the voices of those that share Holocaust denial, racism and antisemitic conspiracy theory. His platform spews out blatant lies about Israel. Napier is a man who does not blink in the presence of the Hezbollah flag and often speaks at the pro-Iranian, pro-Hezbollah, Al-Quds demonstration in London. Mick Napier has been convicted of aggravated trespass during his campaign to chase a Jewish businessman out of Scotland. The man is simply toxic. 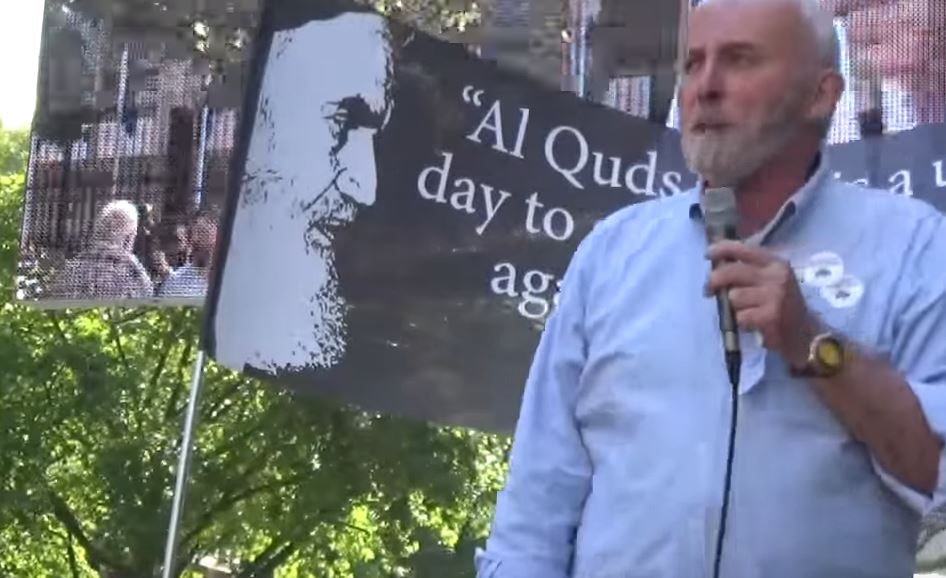 Stevie Docherty or Stevie Mecroni is the main activist advertising the event online. Docherty has shared antisemitic conspiracy that blames the Jews for 9/11. The video he shared is no longer available on YouTube because it violated YT’s policy on hate speech (it can still be found on Daily Motion.)

Docherty has also pushed other antisemitic conspiracy stories and Marxist websites that promote Rothschild conspiracy. Despite standing alongside Jew-baiting Holocaust deniers, he has personally referred to rising claims of antisemitism as a ‘bogus witch hunt inspired by agents of Israel’.

Jola AlJakhbeer (Jolanta Hadzic). Al Jakhbeer pretends she is Jewish and incredibly, is actually the public face of Scottish Jews against Zionism. AlJakhbeer has a history of supporting antisemitic conspiracy theory and Holocaust denial. She has also made racist comments about Scottish people, black people and shared neo-Nazi material online.

Jane Elliott is another who is ‘going to the protest’.  Elliott also shares conspiracy material from hard-core antisemitic websites such as this ‘humansarefree’ post blaming Rothschild for the JFK assassination. The article references neo-Nazi websites such as Rense.

Any visitor to the ‘humansarefree’ website can see it is junk site that is blatantly antisemitic. Elliott also posted a YouTube video talking about “the Rothschild Zionism secret regime in America” and has shared other 9/11 conspiracy junk. This is a screenshot of Elliott liking a post under her JFK post, that both refers to the Rothschilds as ‘Zionist pigs’ and references Shylock.

Ishaq Islam shares streams of antisemitic material with his friends:

I have no intention of republishing the dozens of SPSC antisemites and their posts here. It is possible to read about the antisemitic shares of well-known Scottish anti-Israel activists in a report I published in 2017. The list is long, and several will be at the demonstration. Concentration levels of hard-core antisemites at protests was shown to be over 50%. At just one protest against Radiohead several in the small crowd were found to have shared Holocaust denial. The SPSC and BDS Scotland flow together like a sewer of antisemites.

A scottish web of Islamist extremists

The FoA strategy uses religious incitement. FoA frequently lie to their supporters and suggest that the Al Aqsa mosque is in danger. This false claim has often be used to incite Muslim crowds against Jews and in the past has led to anti-Jewish pogroms.

Let us not pretend that this is a humanitarian issue. In his own book,  ‘Islam: the choice of thinking women’, Ismail Patel advocates the killing of adulterers.

Another co-host, Scottish Human Rights Forum, are a proxy pro-Islamist group. Their Facebook page only ever posts about two issues – ‘Kashmir’ and ‘Palestine’. No other human rights issue in the world interest them. They work hand-in-hand with Tehreek-e-Kashmir – yet another co-host of this anti-Israel event.

We saw their flags at the previous demonstration. Kashmir, Pakistan & Iran. Nobody can wave these flags AND suggest they are human rights activists. Maybe the gross human rights violations in Pakistan are of no interest to Scottish journalists, but maybe they should have sympathy for their colleagues in Pakistan, who are trying to operate in one of the worst nations for free press in the world.

And with the flags comes the antisemitism – Khalid Javid, who attended the last demonstration, shares David Icke’s Rothschild Zionism.

Javid shares numerous Rothschild posts, including from rabid antisemitic websites such as ‘humansarefree’.

Entering some of these timelines you find a web of conspiracy deep enough to make even the members of Palestine Live blush. 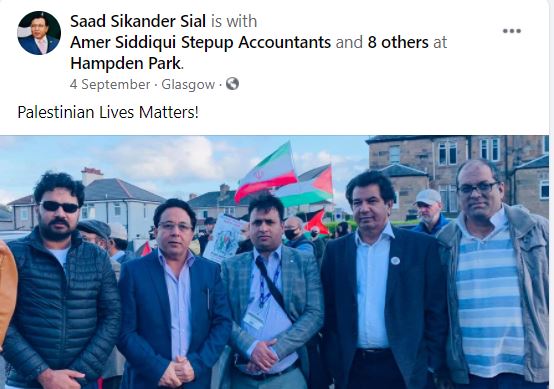 It is impossible to identify everyone, but Saeed Sarwar is on the right of the above image.

Sarwar shares material from some of the most rabid websites that have existed on the web, such as Smoloko.com. 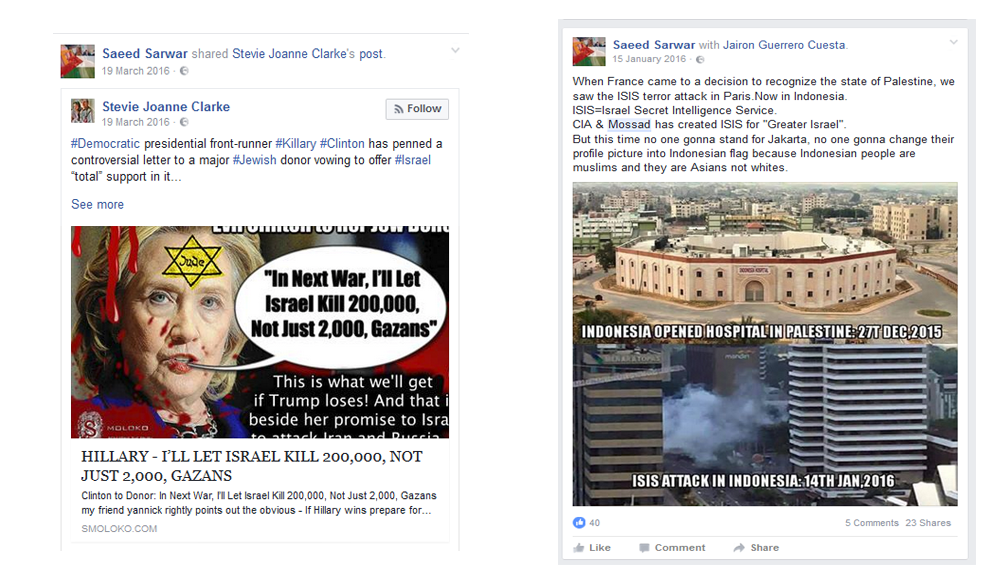 It is no secret that antisemitism is a major problem within British Muslim communities and there is no need to trawl through numerous timelines to prove it. That some Scottish Muslims choose to air that antisemitism by protesting against the Jewish state is almost an inevitability.

And beyond antisemitism there is the hypocrisy. The previous Israel v Scotland game was on the 4th September. Two days after this, the Pakistani community celebrated ‘Defence Day‘ – which is a false narrative story that hides their own aggressive stance in the Indo-Pakistani War of 1965 –  a war that Pakistan started. Those very people who would have you believe that they are interested in human rights – all came out to celebrate. Waving a flag of one of the most repressive nations on earth. 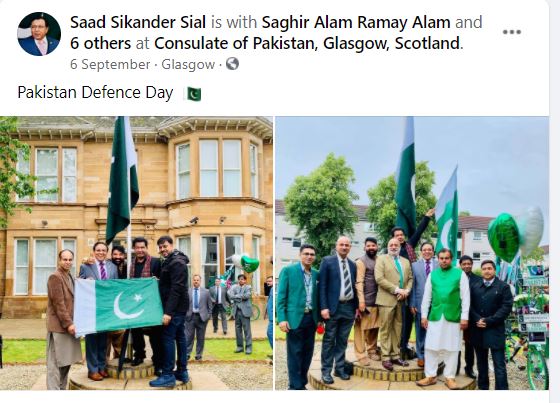 A dissident Irish Republican group – ‘linked to the murder of journalist Lyra McKee‘ – was also standing protesting at Hampden Park last time. Members of the New IRA political front party ‘Saoradh’ stood alongside the SPSC to protest Israel’s presence. The people those with the banner want to ‘free’, have all literally just been arrested on terrorism charges. Maybe they will turn up again this time. 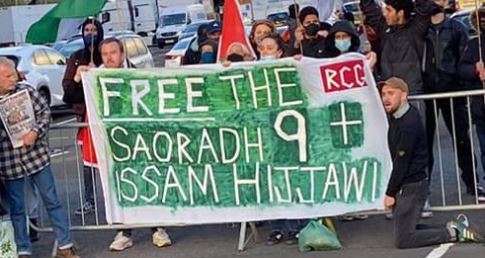 The freedom of the Marxist – Islamist alliance

The important point here is not to curb freedoms. Pro-Pakistani Islamists are allowed to hold hands with Marxists, antisemites and terrorist supporters and join forces to protest whatever they want. The only people who are NOT DOING THEIR JOB PROPERLY are the journalists that reports on these events.

When journalists report these people as ‘pro-Palestinian’ campaigners concerned about ‘human rights’, they are spreading fake news and lying to their readers. They give legitimacy to toxic lies such as ‘Apartheid’, even as they can read the names of Muslim and Christian Israeli Arabs on the Israeli team sheet.

The antisemites are protesting because they do not like Jews, and for them – Israel represents the head of the beast. The Pakistani community that protests Israel does so solely because it is a Jewish state. For them this is a religious battle. Their own nation, whose flag they wave proudly, is a serial abuser of human rights.

For groups like FoA, it is part of the Iranian struggle. The Marxist elements support despots the world over. Given Israel is at war with radical Islamic terrorism, it is little surprise that terrorist supporters do not like them.

None of this is about human rights. We are dealing with blatant Jew-hatred. Something that Scottish people everywhere should be ashamed to have on their streets.

The role of the press is to report the truth. Let us all hope they do so.

124 thoughts on “Scotland v Israel – will the Scottish press finally tell the truth?”