I had a difficult day on Tuesday. One of those days were I see the poison spread on London’s streets. I was at the Corbyn antisemitism demo /counter demo, that took place as the NEC discussed the adoption of the IHRA definition.

There are plenty of political commentaries on the event (1,2,3,4) and I have never been one just to parrot what is said elsewhere. All of us, regardless of where we stand politically, are being carried by tides. Shining a light on the dangerous societal dynamics at work remains my central task.

The NEC event saw the ‘pro-racist’ demonstration that came to voice opposition to the adoption of the IHRA definition of Antisemitism. A small contingent of Jewish people came to counter demonstrate. I did what I always do and walked around, trying to learn from what was taking place. 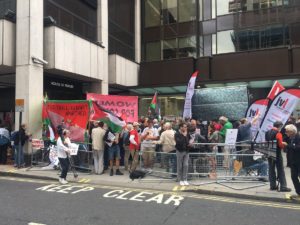 As I stood and watched these events, several pro-Corbyn demonstrators came to talk to me. Five different people asked me if I was Jewish. It felt as if they were asking me ‘what side I am on’. Something I have never experienced before in the UK.

With big JVL (Jewish Voice for Labour) banners on one side and a small contingent waving the Israeli flag on the other, the sight was deceptive. One man stood on the side and said it was fun “watching an internal Jewish disagreement”. This the result of a gross exaggeration of the size of the Jewish anti-Zionist voice. A strategy tragically supported by a media that thrives on click-bait.

Another demonstrator tried to engage me several times. He kept gloating about the ‘superior numbers’ of the pro-Corbyn protest. I tried pointing out the disturbing undercurrent to his message. ‘When was racism against a minority group about numbers’, I asked. There was no coherent response. I spoke with him for a while. He had little but empty one-liners and distortions. Conversations with activists who think they are informed are nothing but frustrating

A pro Corbyn demonstrator with a JVL badge came over to talk. He spent the whole conversation trying to convince me of his ‘Jewishness’. He told me to join ‘Jewish Voice for Labour’ because ‘they’re great’ and he said it didn’t matter if I was Jewish or not.

As you watch people like this operate, you see how the poison is spread. This JVL member did not take part in the demo itself, but rather looked for ‘non-combatants’ he could engage. He walked around behind the pen with the Jewish contingent and spent his time smearing them to bystanders. He carried only two messages. The first was about how Jewish he was. The second was to suggest that those with the Israeli flag were fascists rather than Jews.

Not everyone is a clueless as these propagandists would like however, and at some point he stumbled onto someone who was knowledgeable enough to fight back. The conversation swiftly turned:

This JVL activist wasn’t the only one walking around behind the Jewish protest looking to spread poison. There was a woman engaged in the same task.

I saw one truly heartbreaking incident. The woman targeted a small group of young adults who had wandered into the demo area. She initially brought up that most of them should ‘understand racism’ and then she tried feeding them lies about Israel and Apartheid. Finally, as none of this seemed to have the desired effect, she suggested the Jewish protestors were actually fascists out to divide the community.  The group were visibly shocked – the association had been made – the job was done.

Where are these people now? How about the dozens, if not hundreds of others who drank from the poison well that day?

On the one side is a massive mob spreading distortions and lies and on the other a tiny minority group defending itself against a torrent of false accusations. It isn’t difficult to recognise these signs. Nor is it difficult to understand which way the tide is going.

This blog is unique, and the type of investigative journalism this work requires is intense and at times expensive. Jewish people are currently engaged in a desperate fight against rising antisemitism and parts of British mainstream politics have been infected with the virus. My research is on the front-line.

I was recently named as one of the J100 (‘top 100 people positively influencing Jewish life’) by The Algemeiner. My work is fully independent, and your support makes much of what I do possible. This research can and does make a difference.

If you can, please consider making a donation. Either a single amount or a small monthly contribution. We have to shine a light into the shadows and show people what is happening.

39 thoughts on “Hate against Jewish people. A poison that spreads unnoticed”