Every now and again the mask of the anti-Israel movement slips to such a degree that even the naive and foolish should be able to see the real face of anti-Israel activism. The ‘rape your daughters’ convoy last year is a good example – even if shamefully the CPS has decided not to prosecute those responsible. The current attempt to silence the NGO ‘Roots’ on their UK tour – a joint Israeli/Palestinian peace initiative – is another one of these examples.

Why would anti-Israel protestors seek to silence those building bridges for peace? And what right do people in places such as Manchester or Edinburgh have to try to stop Palestinians who seek dialogue – from having their voice heard in the UK?  What makes it all far worse are those – like politicians – who choose to listen to, and side with, UK activists who support terrorists – rather than helping those Israelis and Palestinians who want peace. Read on.

Friends of Roots come to town

I want to introduce the current target for the ‘haters’. It is a ‘co-existence’ NGO called ‘Roots’. Most people in the US and US have not heard of them because unlike many of the self-titled ‘peace groups’ (which are nothing of the sort), the main focus of Roots is on the ground, building networks within local communities of Jews and Arabs. They are a grassroots organisation who spend their time advocating against separation, a group that believes in ‘non-violence, dignity, and equality’.

Roots is a quintessential grassroots peace group – a real one – built on the hopes of mutual co-existence. Most importantly of all – they encourage dialogue and 10000s of people – Jews, Muslims and Christians have been involved in their initiatives:

Over the past five years, the organisation has been busy, setting up dialogue centres in Nablus, the Jordan Valley, Kfar Adumim-Jahalin, Bethlehem-Gush Etzion, and the South Hebron Hills.

Nowt not to admire surely? Who on earth would want to oppose a joint Israeli – Palestinian initiative? Yet Roots has become a target for boycott. That is because anti-Israel activism in the west, is not about peace-making or Palestinian rights at all – it is about perpetuating the conflict and removing the rights of Jews. Which is why voices of peace and dialogue must be silenced. Groups like Roots pose a real threat; not to the Palestinians – but to the narrative of anti-Israel activists based in Europe and the US.

The Boycott of Roots

A ‘Friends of Roots UK‘ (FoRUK) has been set up and is officially launching this month. As part of the launch, the group is touring the UK, and had organised events in places such as:

This was to enable people in the UK to hear first-hand from Israelis and Palestinians about their personal experiences in bridge-building. These events immediately became targets for anti-Israel protest, with Campaigns from those like ‘Warwick Action for Palestine‘:

The biggest players behind the boycott are hard-core extremist groups, such as ‘Manchester Palestine Action‘ and ‘Youth Front for Palestine‘. These groups celebrated as their campaigns had the desired effect. One by one, their targets cancelled the events.

In Scotland the ‘Scottish Palestine Solidarity Campaign‘ (SPSC) targeted the events in Edinburgh:

We must always bear in mind that these ‘success’ posts can sometimes be bombastic and lack accuracy – but there is evidence that events were indeed called off. This jubilant post from the holocaust denying antisemite, Pete Gregson, which includes official notification of a cancellation, makes for depressing and sickening reading: 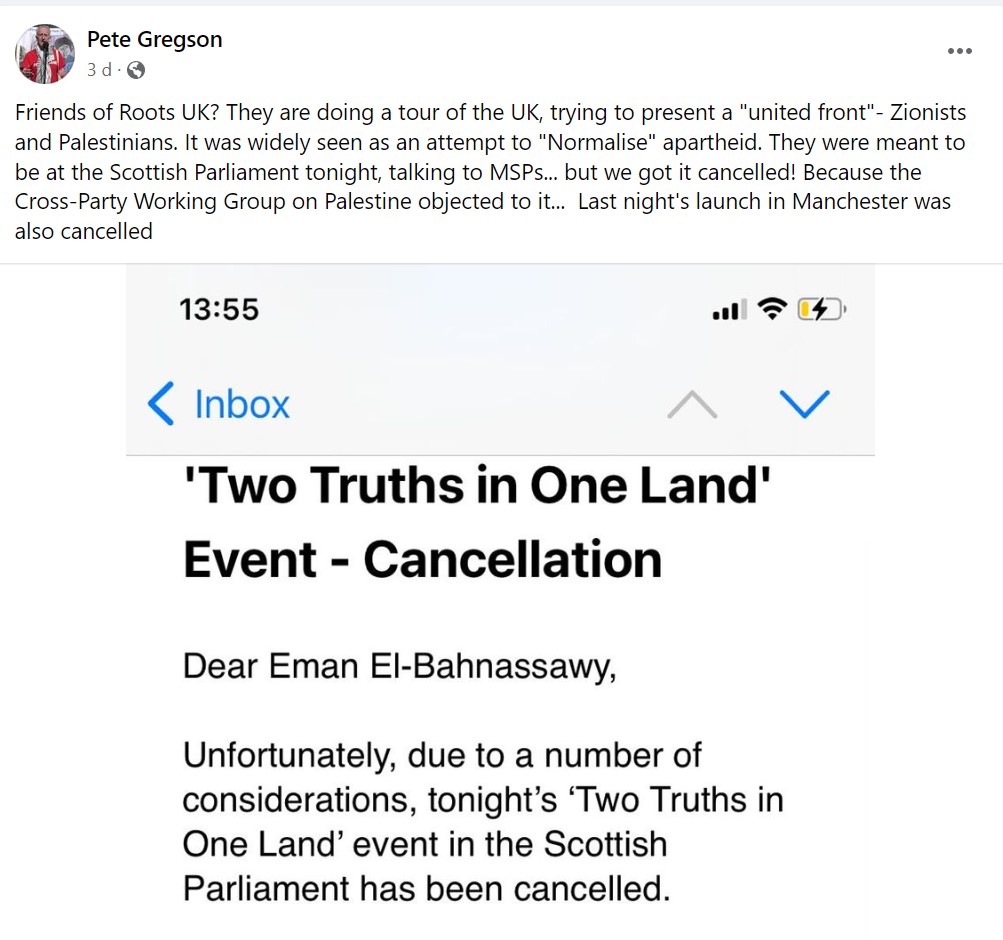 From the posts of these toxic groups it would appear they have been successful – and some events have been called off – including those that involved sitting parliamentarians. Even the student union at Warwick, not just the Palestine Action group – joined the cancellation circus and it appears as if there was some trouble last night- as the students tried to forcibly stop the event.;

What does this tell us about what these people stand for – and about those cowards that cave in to the pressure of hate groups?

I have been saying for years that the rise of these international hate groups – like Palestine Action and the SPSC, which in part has been galvanised by rising Islamist strength in the west – is a key part of the conflict today. On the international stage they are dictating the narrative – and in turn extremists on the ground in PA areas perform with them, dancing in a symbiotic relationship. Together they effectively side-line all moderate voices, and it is unlikely to be a coincidence that talks between the two sides stagnated – along with the rise of the international BDS movement.

These extremists in the west do not really care about Palestinians at all – and they certainly do not speak for the majority of them. Instead – they glorify violence and hate – supporting and giving voice to those terrorists who slaughter innocent Israelis in the street.

These banners – part of Manchester Palestine Action and YFFP protests, were seen in Manchester just a few weeks ago:

Make no mistake about what these banners represent. The ‘glory to the freedom fighters‘ banner – is a direct reference to those terrorists currently attacking innocent civilians in the street. In the promotion for the event, they even name some of those that they went out to ‘honour’: 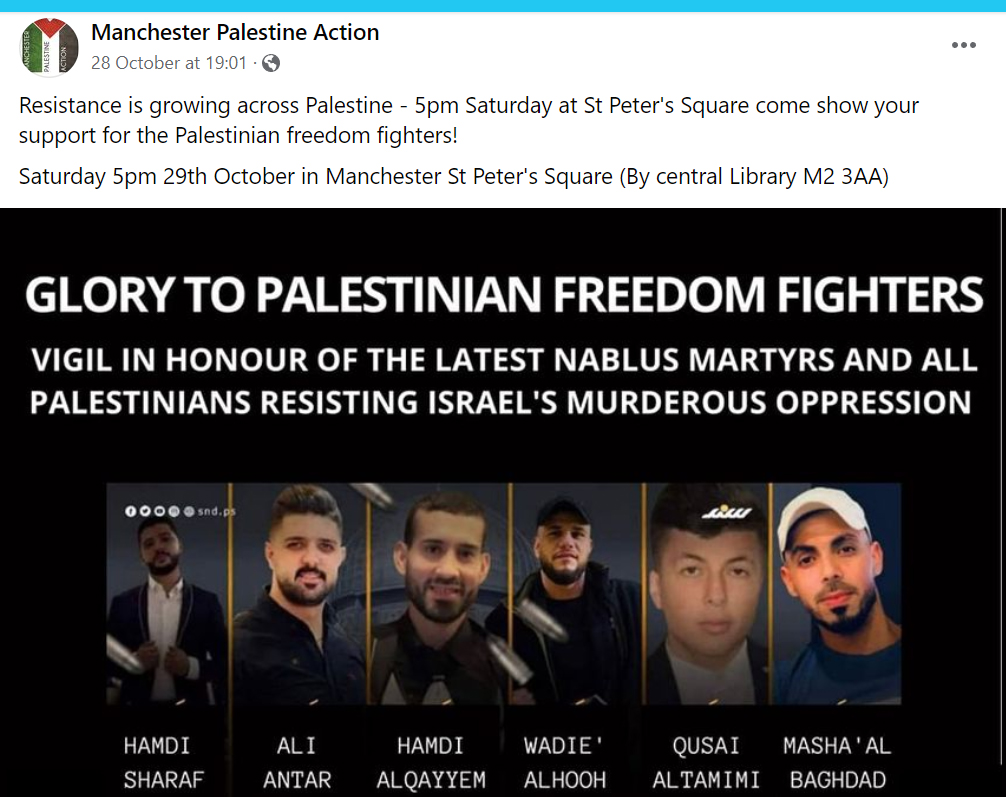 The fourth image in from the left is Wadee Al-Hooh. He led the Lion’s Den terror group in Nablus and was responsible for numerous attacks. This is also an image of him (left): 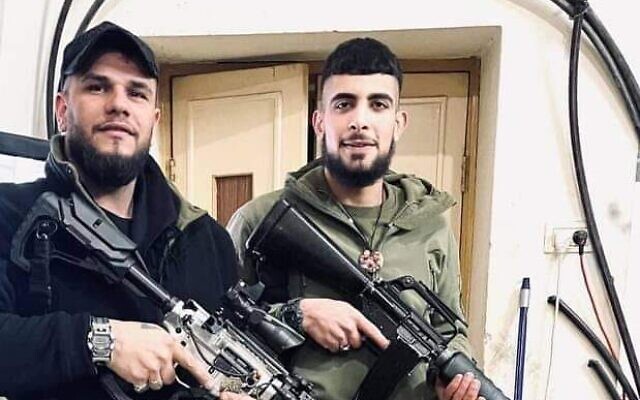 These people are literally glorifying terrorists on the streets of Manchester and supporting those who slaughter Israelis. When they hold up the banner ‘resistance is a duty‘, it is a clear reference to the ongoing violence or ‘Intifada’. This ‘Globalise the Intifada’ tweet is from the YFFP account on November 8th:

The ‘Intifada’ that they want to globalise murdered three Israelis – Tamir Avihai (50), Michael Ladygin (36), Motti Ashkenazi (59) just last week. This is open support for terrorism on the streets of the UK.

Those who side with the hate groups

On the one side we have a join Israeli / Palestinian peace initiative. On the other we have open support for terrorists. Those behind the peace initiative want to talk to people – the group supporting terrorists want them silenced. It is *inconceivable’ that anyone in their right minds would side with the terrorists. Yet clearly this is what has been happening over the last few days in the UK. Even politicians appear to have sided with those that openly support terrorism – and helped to no-platform those that seek dialogue and peace.

This tells you everything you need to know about the reality of the conflict, the state of the solidarity movement, and tragically, which side the politicians are more willing to listen to.

If it is true that Afzal Khan – a sitting Labour MP in Manchester – actually sided with groups that carry terrorist supporting banners – and chose to cancel his appearance at the Roots UK launch event. Then the Labour leadership should make sure he is no longer speaking in their name.

But for the rest of us – we need to understand the hostile reality of the world we live in – and we need to make sure that as many other people as possible understand it too.

54 thoughts on “Burning peaceful roots. How UK politicians side with the terrorists”