The extensive differences between the Israeli political system and those of the UK or US lead to a tsunami of political misinformation. This allows critics to twist the facts skewing their reporting in a way which suits their own political leanings. Because of this, the success of Itamar Ben Gvir (Otzmah Yehudit party), Bezalel Smotrich (Religious Zionism Party), and Avi Maoz (Noam Party) in the recent Israeli election have handed Israel’s enemies pure dynamite, and even some left-wing Jewish newspapers have eagerly joined in with the demonisation campaign.

This has left supporters of Israel – many of whom also have difficulty understanding Israeli politics – unable to properly counter the hostile narrative. Has Israel been handed to the extremists?

I wrote this piece to counter the heavily biased, misplaced, and toxic narrative we have seen since the Israeli election results came in. And specifically to answer those who have said that it has anything to do with ‘our worst fears‘.

Trust me on this – an all-out war with Iran, a massive attack from Hezbollah, or another Hamas-led suicide bombing campaign – all hold far more to fear than the 10.83% of the vote that a religious Zionist union received in a recent democratic election. But then again, maybe the fears of Israelis (who would have to pay the price of these attacks) and the fears of Jews living in the comfort of North London or New York (who would look on safely from afar) – are just not in alignment.

Five months ago I published a piece on the Israeli election that predicted:

I am not here to take sides. Coalition politics is messy. I don’t remember a single Israeli government, of which one or more members were not viewed as ‘extreme’ by many. That is how coalition politics works. With the mainstream groups regarding each other as competitors for office, allies towards the fringe must be courted.  It is an unfortunate but natural part of coalition politics. This has been exacerbated in recent times by the rise of an explicitly ‘anti-Bibi’ coalition. In essence the parties in the centre who are complaining about the make-up of the new government need to take a long hard look in the mirror. With whom can Netanyahu build a coalition if they all shun him?

The most extreme government in the history of the universe?

But I want to address the key claim – to prove it is little more than the narrative of Israel’s enemies. Namely, that this incoming Israeli government is ‘the most extreme government in the history of Israel’.

It is a claim being repeated throughout the west, mainly driven by left wing and centre-left media and politicians (examples 1, 2, 3, 4, 5). But is it true? The last coalition had Ra’am – a living, breathing, Islamist party on board.  Sexist? Homophobic? Religious extremist? Ultra-conservative? Brotherhood inspired? You betcha! The ‘anyone but Bibi’ camp didn’t just hug that ‘clearly extreme’ party without a word – they hailed the union as a ‘success’ and then – without any air at all between them and coalition collapse – placed themselves in the unenviable position of being held hostage to an Islamist party at every single parliamentary vote. In theory, if Ben Gvir, Smotrich and Maoz all refused to vote for a government proposal in parliament, it could still pass – which gives Netanyahu room to breathe over his coalition outliers in a way Yair Lapid did not have over his.

What haters do however when those on the right win, is *always* suggest that the government is the most extreme in Israel’s history. With the general consensus of Israel’s critics – and ‘fair weather friends’ suggesting this is ‘the most extreme far right government that Israel has ever had‘ – I thought I would explore the truth:.

Haven’t we heard this all before?

This is what ‘Americans for Peace Now’ said following the 2019 election:

Or from the ‘Palestine Info centre’ following the 2015 election:

In the pre-Twitter days -a Foreign Policy article following the 2009 election:

An article from the World Socialist Website on Sharon’s electoral success in 2003:

How about Benny Morris on Netanyahu’s victory in 1996 (this was before the Second Intifada gave Morris his ‘Damascus moment‘): 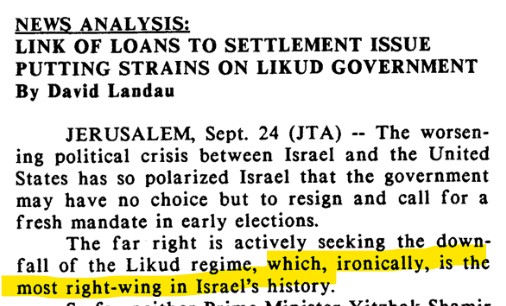 ‘Most right wing’, ‘most extreme’ – these are leftist smears used to silence and demonise victory whenever the right-wing wins elections. There is a simple rule. When the Likud wins – the government is always labelled the ‘most extreme government in Israel’s history‘.

After the 1988 election – there was a national unity coalition. This collapsed in 1990 – and as Shimon Peres was unable to put together enough support – it was Shamir that formed a new government. This is the ‘most right-wing government in Israel’s history‘ referenced above in the image from JTA. Just to prove this was not a one-off – it was also referenced as such in a Foreign Affairs article:

The 1990 coalition was the 24th government of the State of Israel. The coalition consisted of the orthodox parties – like ‘Shas’ and ‘Agudat Yisrael’. It also included no less than three ‘settler’ parties – the ‘National Religious Party’, ‘Tehiya’ and ‘Moledet’

The Moledet party explicitly advocated transfer. This from the NYT in November 1990:

Tehiya, another ‘ultranationalist’ party in the coalition, wanted to annex Gaza and *all of the land* on the west bank of the Jordan. The party was formed to oppose the peace deal with Egypt and part of its original platform was the retention and settlement of the Sinai. At the time of the coalition, Tehiya also advocated setting up a new settlement every time there was a terror attack against an Israeli civilian (it was the height of the first Intifada – so this was almost daily).

None of the political parties today have platforms less accommodating. It is telling that this coalition collapsed when Shamir signalled a willingness to make moves towards peace (NYT – Jan 1992): 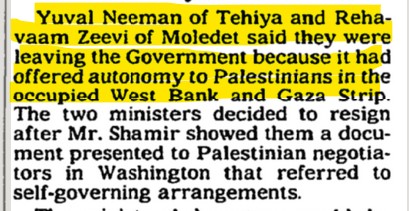 There are several lessons in this. The one to stress at this point is that it doesn’t really matter what minority parties in the coalition think or believe. At the end of the day, it is the major party, that of the PM, which calls the shots. All the extremist parties can do when inevitably things go against them, is choose to leave. This is why Israeli coalitions seldom last the full term.

So most importantly, what of Likud?

All this means that the claim that the 2022 Netanyahu government is more extreme than Shamir’s seems wild from the outset. More so, given that each Likud victory since 1990 has been met with a similar claim. But I want to drive this home more forcefully. If the major player in a coalition is the one calling the shots – then to address the claim head-on simply becomes an exercise of comparing the 1988 and 2022 platforms of the winning party – the Likud. If the Likud party is visibly more extreme in 2022 than it used to be, then maybe the haters have a case.

Aside from a blatant declaration that there will never be a ‘Palestinian state’ the 1988 Likud platform does not even contain the word ‘Palestinian’.

And on non security matters, 2022 Likud is far more socially progressive, diverse, inclusive – and aware of the needs of Israeli Arabs and other minority groups – than Shamir’s Likud could ever have been.

Which means the entirety of the 1990 coalition – including the largest party – held views more extreme than any party in the coalition today.

Ergo: Before Netanyahu’s’ most extreme government of 2022 – before the claims about the extremist governments of 2019, 2015, 2013, 2009, 2003 and before Netanyahu’s’ first coalition in 1996 – there was Shamir’s 1990 coalition. And it held positions more extreme than anything that exists today. The truth is that the Oslo peace process changed Israeli politics forever, shifting it leftwards, and nothing we have seen since comes close to what we had seen before.

Which means – support it or not – the claims about the Netanyahu coalition today are all false. You can dislike it – you can oppose the policies and positions it promotes – you can certainly find some characters within it odious – you can do all of this. But if you tell demonising lies about it, you are just spreading fake news and fuelling anti-Israel hate.

Ironically (although they will never admit it) – for all those who have been attacking Netanyahu relentlessly for the last few years – he is today the ‘dove in the camp’. Netanyahu is the experienced, well-oiled, political leader. Netanyahu is actually the saviour of the left-wing bloc that hates him so much.

And because he will lead the ruling party in the new coalition – this isn’t the most extreme government Israel has ever had.

47 thoughts on “Israel – the most extreme government in the history of the universe?”