I am writing this because you recently blocked me on Twitter. I am not an abusive guy, I am not an extremist, I do not spam – and I know what I am talking about. You apparently did not like that I disagreed with your post. You have the right to block whoever you want to, but effectively you just put your fingers in your ears – shutting out the truth.

All I really want to say is this – can you virtue signal at someone else’s expense – and leave what you do not understand alone? 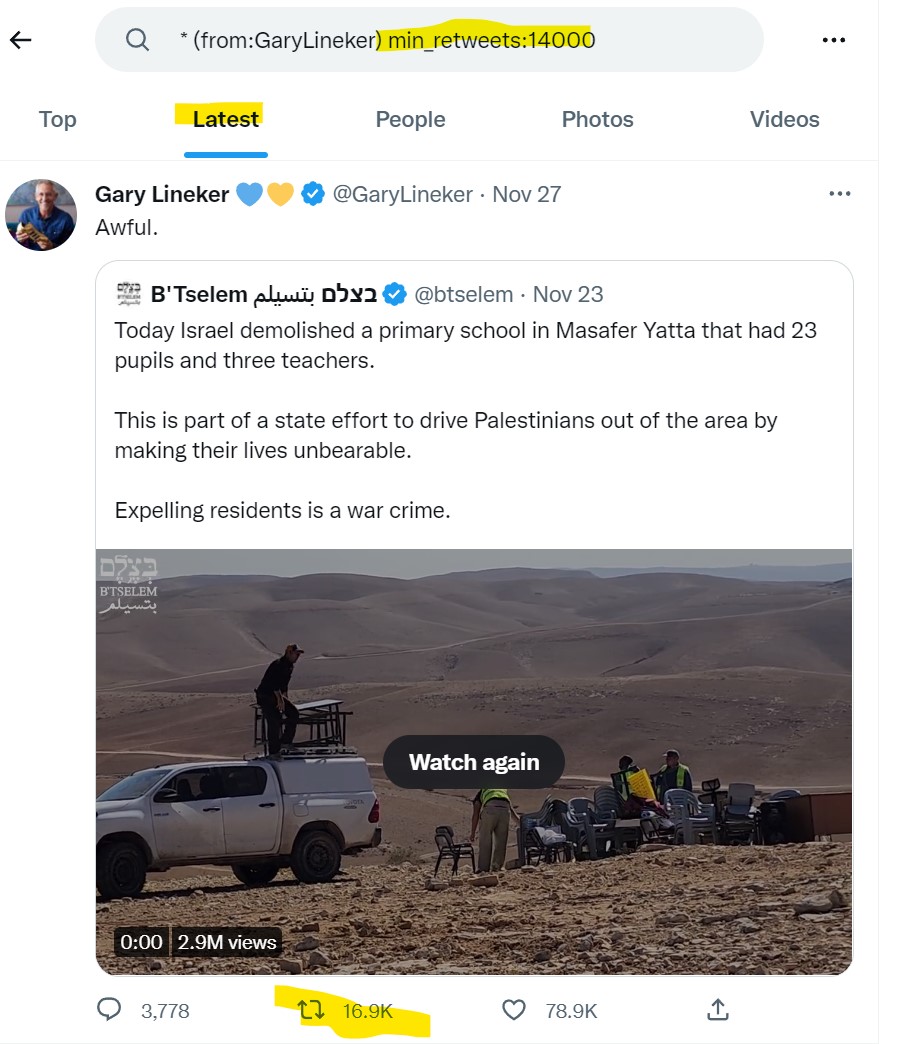 Before discussing the content, I need to point out that this was retweeted over 16k times, and received over 78k likes. This makes it your most viral tweet in well over a year.

I took a sample of 200 of those retweeting you. Sure, there are a few ignorant virtue signallers amplifying your voice – but for the most part the tweet was used by antisemites, Islamist fundamentalists, Jew baiters, trolls and so on – who all climbed on your back in order to refuel their anti-Jewish hatred and/or attack Jews online.

It is not like you do not have form on this. Every now and again you tweet out something that describes Israel as ‘awful’. (examples 1, 2, 3, 4, 5) You’ve even retweeted toxic propagandists such as Ben White.

What being a minority means

Jewish people are a tiny minority group and there are far more antisemites than there are Jews in the world. Tweets like this don’t go viral because of ‘human rights’, they *only* go viral because Jews are vastly outnumbered by those that hate them.

So my first question is this: Just which audience are you performing for when you tweet anti-Israel material? Because I really doubt you want to empower people like him:

Hypocrisy and the virtue signalling impulse

I do not believe there is malice or antisemitism involved. I assume you do it because errantly you have been led down a giant rabbit hole. Maybe it is a ‘this will make me feel better’, impulse after seeing a piece of online propaganda that disturbed you. I also have little doubt that you have been told by friends to ‘ignore the noise’ coming from those ‘Zionist extremists’ who loudly complain when you tweet this stuff.

On the same day as you attacked Israel you tweeted about your favourite stadium in Qatar. A stadium which was built with the blood of migrant workers. I am not even going to dwell on this hypocrisy. I just want to focus on the content of your tweet.

This is the demolished ‘school‘ from your tweet – the pre-fab building, standing alone at the top of the hill: 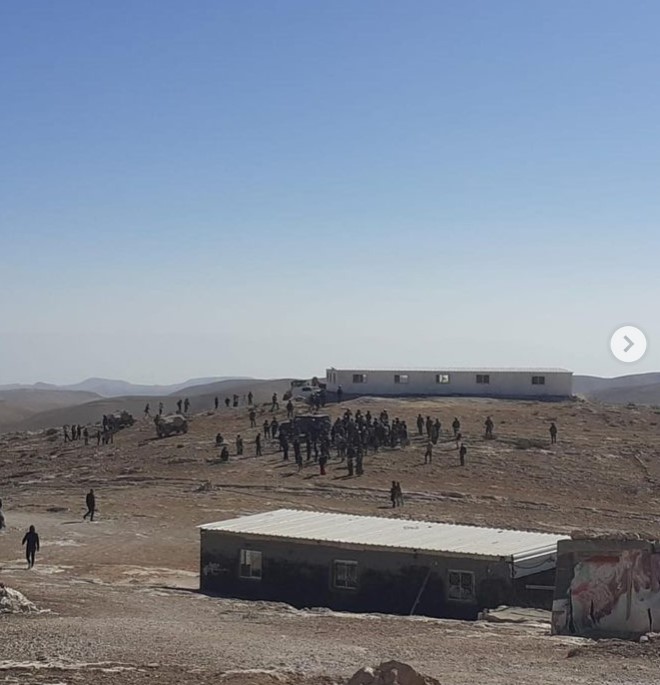 Answering those four questions is important.

So is answering these:

Did you ask yourself any of these questions before promoting an artificial narrative to millions of your followers?

The truth is that the school was placed there recently, probably just so that the Israelis would knock it down. They just did the same with another building last week, that they called a mosque.

Although the small pile of rubble clearly does not back them up, they claim this ‘mosque’ was ‘100 square meters in size’: 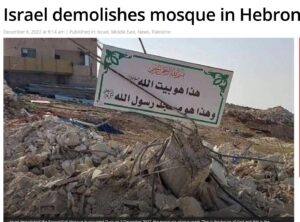 None of the propagandist websites will tell you that this illegal structure went up about three months ago. It was built in a place called ‘Khallet Taha‘ in a region not far from your school. These are the lands the mosque was on: 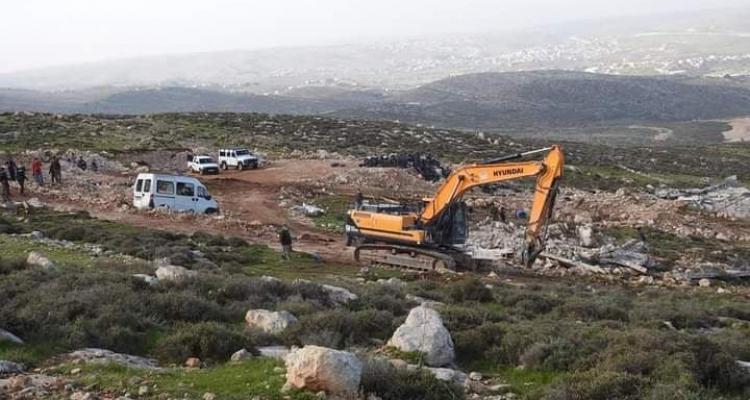 Question: Just who is the ‘large mosque’ for?

Even more suspiciously – that pristine sign on top of the rubble – does not look as if it was hanging anywhere near a building that was demolished, but rather hastily placed there following a demolition. The sign says in Arabic ‘this is the house of God and this is the Masjid Rasool Allah’

And whilst looking at other footage from the area,  I came across a sign that looks remarkably similar (timestamp 20 seconds). The video was posted just recently:

The sign in Arabic reads ‘this is the house of God and this is the Masjid Rasool Allah’. It is the same sign as the one on the pile of rubble.

Printed signs such as this can be moved from building to building at will. Every illegal structure becomes a mosque, a school, or a medical centre. Find a piece of rubble and place a sign on top.

They pick whatever works best for the time. In early 2020, they even tried to piggyback their propaganda on the pandemic:

This is all deliberate – non-schools, non-mosques, and non-medical clinics. None of these buildings are legal – and they are all part of a strategic propaganda war. When Israel brings down the illegal structures, footage gets shared widely in Arabic – to provoke anger – acting as an incentive for violence. Propagandists quickly translate it into English, looking for naive do-gooders to help them score political points.

Why wouldn’t they? After all, if people in the west are doing zero due diligence before sharing, they can literally put any old story to a pile of rubble, and it will go viral.

Distortion mixed with empty propaganda. And you share it with millions.

The very real mess on the ground

I have no intention of turning this into a long-winded explanation. There are many sides to this conflict – and this is not about whether or not Palestinians living in places such as Ramallah, Jericho and Nablus find themselves in a difficult and tragic situation.

In truth, in most places, life on the ground is relatively settled. Shocking as this may seem to those on the outside, most Palestinians go through their daily lives without ever seeing an Israeli soldier. The only police most see are their own.

Tragically, Palestinian maximalist demands – along with terrorist driven violence, led to a complete stagnation of the peace process. Radical Islamic terror groups rule the street, and the fractured Palestinian authorities cannot even hold an election because they think they will lose to the proscribed terrorist groups.

There are a few hotspots. Places in which Palestinian agitators can create violent confrontation with the IDF. This works well for them as it produces highly edited images of armed Israeli soldiers seemingly over-reacting – or Israeli bulldozers taking down illegal structures – images that are soon spreading virally online without any context.

This includes the area of the ‘school’ – which is now being called ‘Masafer Yatta’. The area – as per the agreements between Israel and the Palestinian Authority – is under total Israeli control (referred to in the agreements as ‘Area C‘). This case – the one on the school – is the result of a 22-year-old legal battle over a military firing zone.

Which raises another question. If Israel simply went around doing what it wanted, when it wanted – why would it take 22 years for a case to be settled in the Israeli courts?

Whether it is in Hebron, on Temple Mount, or near the Gazan borders they seek to ignite conflict. Anywhere in fact, that can be turned into a battlefield by Palestinians who want to fight. Peace and quiet is anathema to them. Numerous NGOs, long taken over by a union of Marxists and Islamists, rubber stamp almost every fake story that they can. Iranian or Qatari state media, ensure every word reaches the masses.

Endless propaganda and the strategic battlefield

Last week a Palestinian tried to attacked Israelis in the car. He then stabbed a nearby border guard in the face. When he lost a struggle to steal a weapon he was shot and killed. A UN spokesperson reduced it to a ‘scuffle’. This vile rewriting of history was then repeated in the Guardian newspaper.

There is no correlation remaining whatsoever between the event (the terror attack) and the way it was reported (an innocent man was shot). It is the lie that goes viral. Raw propaganda packaged for the international virtue signallers.

Why on earth would you want to get involved in this?

Spreading myths empowers the extremists. It perpetuates the conflict and pushes peace further away. Nobody in their right mind seriously believes those people attacking Israelis want a two state solution. Nor do those putting up illegal structures. They have deliberately created a battlefield (it doesn’t actually exist unless they come out to confront Israelis).

All this ends with people on the outside, people such as yourself – making it all worse by promoting the propaganda.

So please, can you virtue signal at someone else’s expense – and leave what you do not understand alone.

55 thoughts on “An open letter to Gary Lineker”