As Christians face slaughter and I mention it – I have been suspended on Twitter again. Then – to double down – I was also targeted over an investigation of a Scottish fundraising scam with terrorist links in Gaza. Two FACTUAL tweets – each has me suspended. Twitter is not just allowing Jews who speak up to be bullied off their platform – they are actively helping to silence us.

The suspension for mentioning slaughtered Christians

Whilst obviously focusing on Israel and antisemitism, I often speak up about other global issues – many of which are related to the problems we ourselves face. The current war in Ukraine or the protests in Iran are two obvious topics.  One of the most notable of these is the Islamic persecution of Christians in Asia, the Middle East and Africa – and just as importantly – western indifference to it.

With that in mind, I posted a tweet about recent deadly events in Nigeria – and I was suspended for it: 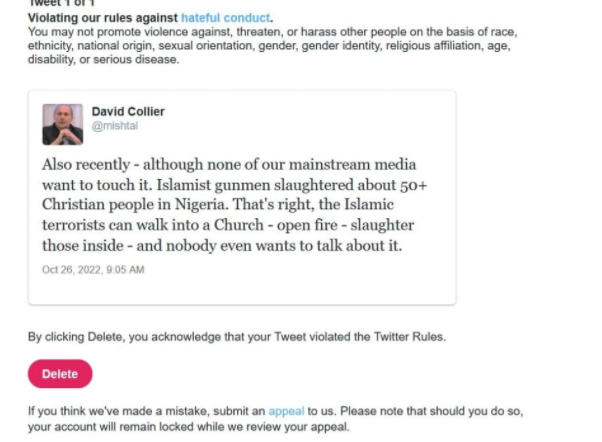 Over the last few weeks dozens of Christians have been slaughtered. The numbers are staggering. In June, in a single attack on a Church by Islamic terrorists somewhere between 50 and 80 Christians were massacred. The recent attacks killed over 70 Christians and also included the slaughter of a people praying in a church. So yes – it is certainly worthy of mention. And Nigeria is not alone – there are 50 countries where it is ‘dangerous’ to be a Christian today.

The horror of Christchurch

We all know about the horror of Christchurch. Brendan Tarrant, a white supremacist in New Zealand, committed a terror atrocity targeting two mosques and slaughtering 51 innocent Muslims at prayer. A vile, despicable and murderous attack that should be condemned from every rooftop. And indeed it was. The Guardian has referenced it in approximately 377 articles. It galvanised the UK government into holding a debate on right wing terrorism and the United Nations chief went to the scene of the terror attack to speak out. Muslim organisations such as the MCB make remembrance statements each year. When the French set up a multi-nation collaborative project to take down terrorist content found online – they named it the ‘Christchurch Call’.

The 50+ innocent victims from the St Francis Church in Owo have been forgotten within weeks of the massacre.

The silence of Peshawar

Have you heard about the massacre earlier this year of Muslims at prayer in Peshawar? Probably not. In March 2022, a lone gunman walked into the Jamia Masjid in Peshawar, Pakistan and began shooting worshippers. He then detonated the explosive vest he was wearing. Sixty-two innocent Muslims were slaughtered at prayer. A higher death toll than Christchurch – but a key difference here – is that they were Shia – a persecuted minority in Sunni dominated Pakistan.

As far as I can tell, the Guardian ran just one article on it. And that was just something they took from Associated Press. The BBC also only seemed to have written one article as well – which is a far cry from the manner the BBC dealt with Christchurch.

It seems that the victims at Peshawar were ‘the wrong sort of Muslims’ because even the Muslim Council of Britain – the group that claims to be the ‘voice of British Muslims‘ – does not seem to have said a single word.

The innocent victims of Peshawar were forgotten with days.

The problem with truth telling

Unlike the Muslims slaughtered in Christchurch, discussing the massacres of Christians – and even the massacres of Shia Muslims in Pakistan – goes against the current agenda. Two forces work against you – the ‘progressives’ and the Islamists. In public spaces you are even called ‘islamophobic’ to want to talk about it all. Which leaves me a target for no-platforming. Discussing the deadly problems that minority groups experience in Muslim dominated areas – is a taboo subject that will see you in trouble and without many friends.

Make no mistake – for this reason I was attacked – and for this reason I have been silenced. Some even proudly boast about it. In suspending me for telling the truth about the persecution of Christians, Twitter conforms to Islamist ideology on what can and what cannot be said. Some on Twitter even publicly celebrate the victory of their censorship : 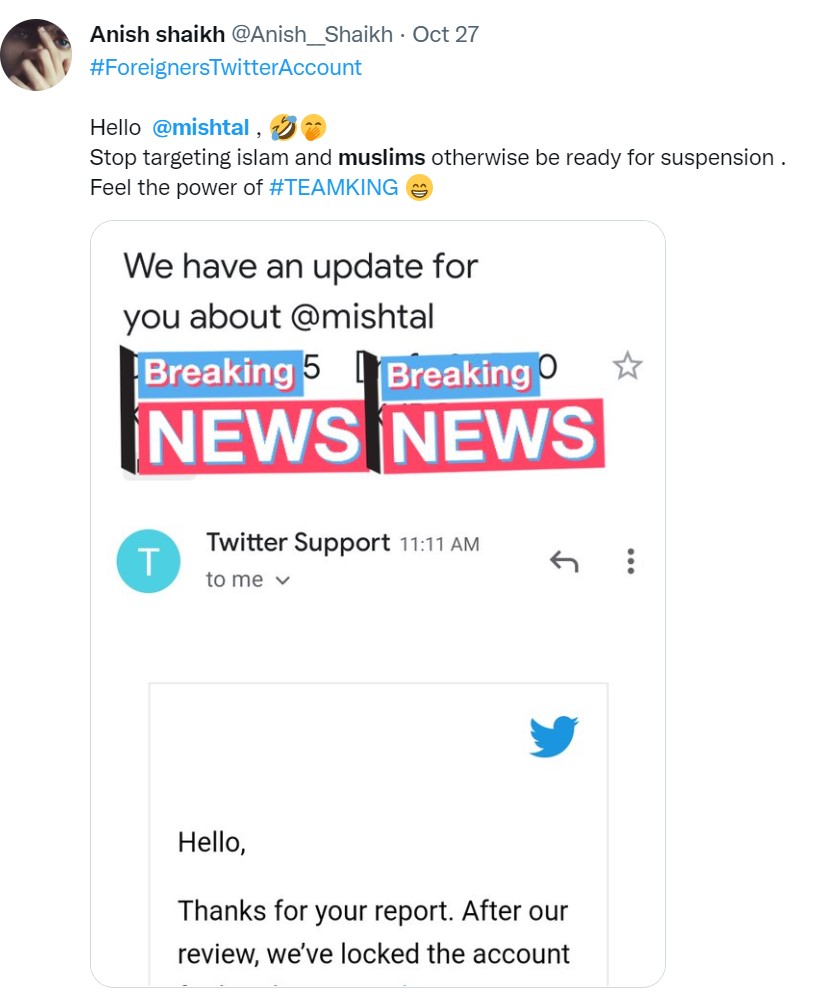 And then there is the Scottish scam

But it doesn’t end there. I received a second simultaneous suspension. Now this – even more than the first- is patently absurd. I recently exposed a fundraising scam in Scotland – and I wrote a tweet to publish the article. That tweet apparently also broke the rules for ‘hateful conduct’: 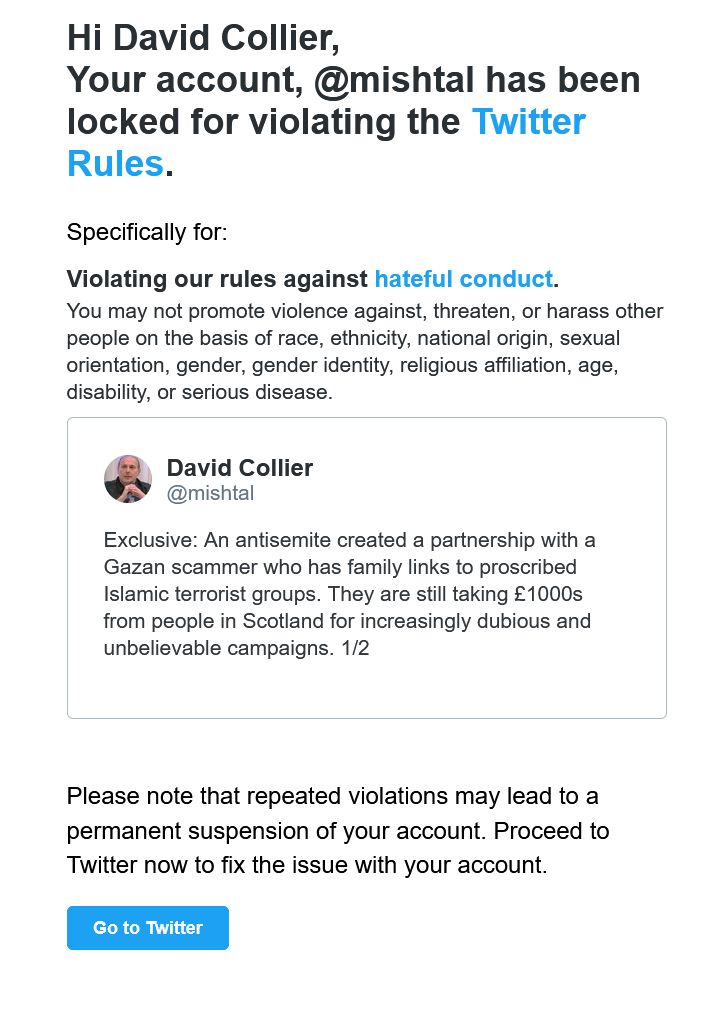 Trying my hardest I fail to understand just what could possibly be wrong with this one. An antisemite did create a partnership with a scammer in Gaza who does have family links to both Hamas and Islamic Jihad. They are currently taking £1000s from people in Scotland and their campaigns are getting increasingly absurd. Each of my points is factually accuate and thanks to this expose I believe Police Scotland have now got involved.

But as it stands, I have been no-platformed again – for doing nothing but fighting antisemitism. And again, it is easy to find the malicious intent and coordination behind those reporting me: 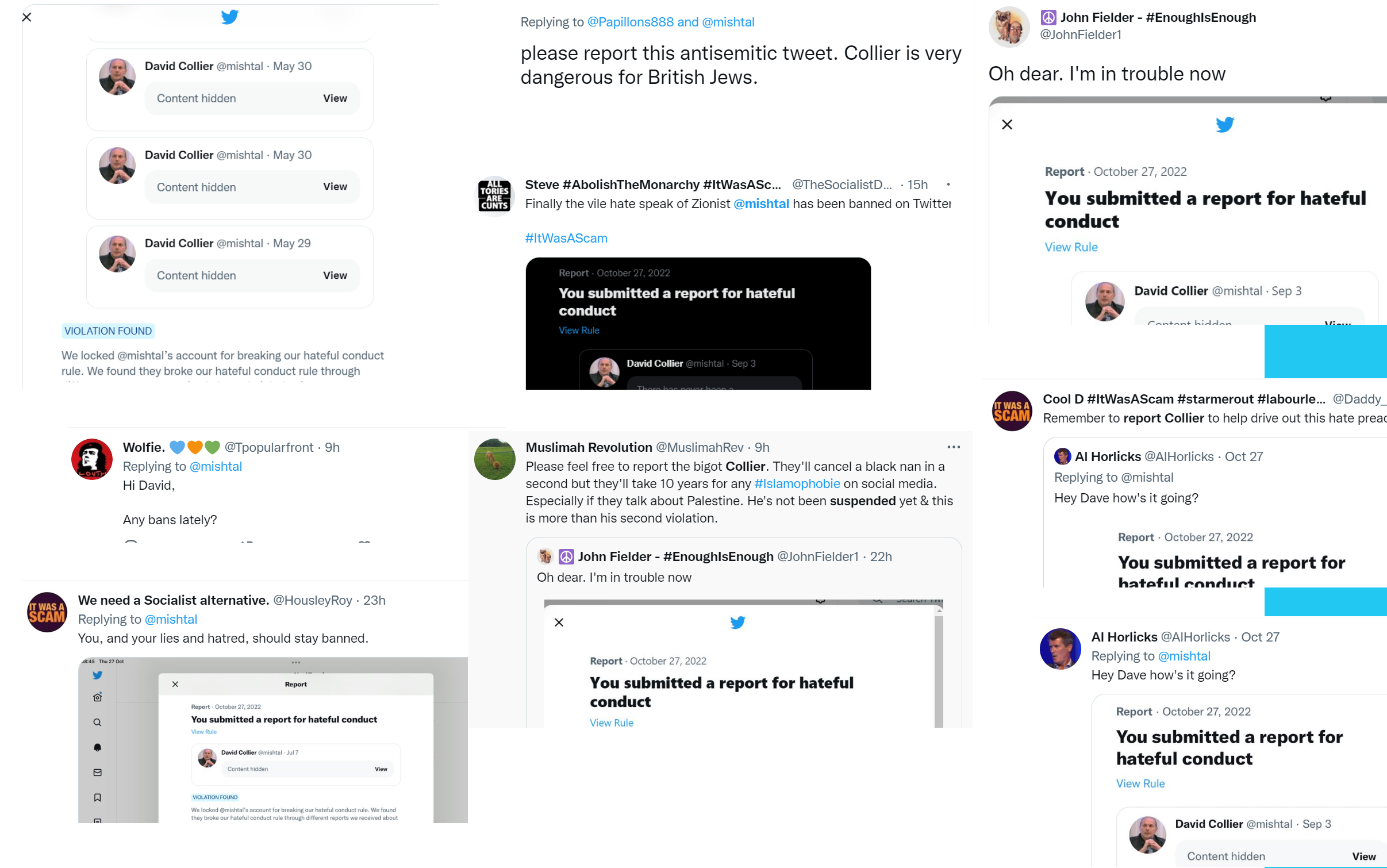 This is undoubtedly malicious. It is also clearly coordinated. And above all it is a blatant attempt from Islamists and the hard left – to have me completely silenced. The question therefore becomes – why does Twitter – who can protect me from this – *CHOOSE* to side with them and silence my voice?

Is it numbers? Jews are always outnumbered. If Twitter by default sides with the majority then Twitter actively helps bully minority groups. For the Jewish people – the quintessential minority group – this is really bad news.

Twitter also refuses to grant me the basic cover it could provide – (by giving my account a blue tick). Twitter is actively paving the way for antisemites to attack Jews who fight antisemitism and refusing to give them protection they can easily give. Haven’t they kind of got this all the wrong way round?

For now – I am appealing the suspensions. If you do not know me already – I will always fight my corner because I am speaking up for Jews everywhere. This refusal to back down so easily means I cannot currently post this on Twitter. If you have an account – please help me share it there.