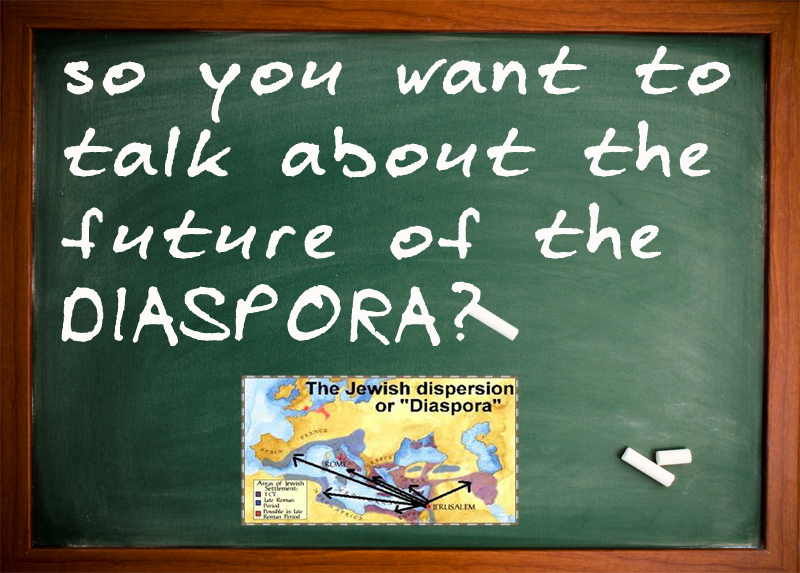 A Jewish life outside of Israel – on matters Diaspora

Israel’s Foreign Minister Tzipi Hotovely is in hot water over ‘disparaging‘ remarks she made about US Jewry. Whether or not there is any truth to her comments, Hotovely broke the unspoken rule of diaspora politics – Israeli politicians cannot criticise the Diaspora, but the Diaspora can freely criticise Israel.

The only surprise about these type of events, is that people are surprised by them. The truth is that each time this happens, it shakes the roots of a fake paradigm. Those connected to the issues feel such discomfort precisely because it sheds light into corners that must never be spoken about.

This is not a piece trying to analyse the complexities of today’s Israel-Diaspora relationship. It is not my place to tell other Jews what they should feel. As always my approach is the wider historical perspective.  As someone who uses history to analyse the present, I often feel people deal with today as the ‘permanent’, when in reality, we are forever standing on shifting sands. It is the ‘permanence’ I seek to address.

Most nations have some sort of an ex-pat community living in other countries, with families holding onto identity for a generation or two before fully integrating into their new host society. None have a Diaspora like the Jews. The Diaspora is unique in that it spawned the mother state, rather than the other way around. Yet clearly, there is absurdity here, because historical Israel also gave birth to the Diaspora. Which leaves us asking the question – just who is the parent, and who is the child?

In reality Israel is the parent, who is mistakenly treated by the Diaspora as the child. Israel is a ship that over the past 100 years, pulled up the anchor, left port, and sailed into the horizon. Just as many anti-Israel activists suggest Israel is full of Europeans from Poland (as if 1948 Europe was left with enough Jews to populate a nation), this errant idea, of the ‘European’ nature of Israel, also exists in the Diaspora. Israel is a nation in the Middle East, of the Middle East.

Those Jews in the Diaspora who were there before the Holocaust, or still around in 1948 to see Israel’s birth, know the harsh reality of the world we live in. Those old enough to remember 1967, are aware of the fragility that Israel once knew. But for those born into a post-cold war environment, where religions of globalization and multiculturalism took the place of the fear of a ‘four-minute-warning’, Israel’s domination of its own neighborhood, is all they have ever known. They have only ever seen Israel as invincible. These people remain blissfully unaware that the Western comfort and wall-breaking idealism that they enjoy, is the false ‘permanent’ of their own world vision.

The underlying assumption in Diaspora Jewry is that Israel and the Diaspora can happily cohabitate on the same planet. There is no reason on earth to believe this is true. The Diaspora is a result of the dispersal. The Diaspora existed because Israel didn’t – and now Israel is on the map. 1948 saw an event that would forever be etched as a milestone onto any retelling of the Jewish timeline.

What occurred was of more import than the ideological differences that saw both Christianity and Islam split into warring factions. Yet Judaism is not just another religion, we are also a people, which is why our orthodoxy and reform, regardless of the arguments, can all exist under one big umbrella marked ‘Jew’.

If Israel was at peace, if it were Switzerland, then the Diaspora could go about finding its own way. Making its own path, into whatever post-creation-of-Israel existence that imaginary universe would have plotted for it. But Israel is not at peace. It is, as it has always been, engaged in a bitter conflict, that brings it face to face with ethical issues, that the current ‘permanence’ of the West doesn’t have to cope with.

So whilst the vast majority in the Diaspora recognise Israel’s right to defend itself, many have trouble accepting the cost of that necessity. This split, between our world and theirs, creates an ethical imbalance. Israel is ours, we possess it and own it. It lives in our world, and yet it dares to behave as if it lives in another. We treat it as the wayward child, when in fact it remains the parent. This flaw in Diaspora thinking, underpinned by a difference between ‘Israel as ideal’, and ‘Israel as reality’, is at the heart of a very difficult and complex relationship.

So if the underlying assumption is built on a false premise, that of ‘permanence’, what is the future of the Diaspora? And this question nobody can yet answer. If Israel were to know peace, then the central conflict would shift from within the Diaspora (how dare Israel embarrass me in front of my friends?) to Jews in Israel (now we have peace, what kind of nation do we want Israel to be?). In such a scenario, tensions would lessen, and the strain on Jews in the Diaspora would evaporate. Unchallenged, Diaspora identity could continue slowly drifting.

But this is not reality. If, as seems likely, Israel is continually required to act, from a position of domination, to ensure the safety and security for its own citizens, then an ever-increasing amount of strain will be applied on those who just do not understand the history of the conflict, or the underlying necessity of Israel’s actions. More and more Jews, will suffer cognitive dissonance, and alienate themselves as the easy option – ‘that embarrassing family member – is no friend of mine!’

For as long as Diaspora Jews believe in the false ‘permanence’ of their own security, for as long as Israel provides the necessary Jewish target for antisemites to attack, and for as long as Israel’s security situation causes outbreaks of sporadic violence, the amount of anti-Zionist Jews will increase. This a probability, mainly because of the way Diaspora Jewry has internally dealt with the conflict.

Israel is central to Jewish Identity

Israel is a central part of our Jewish identity. To see raw evidence of this you only need to look at the friction between elements of Jewish Society in the Diaspora and Israel. Many Jews do not keep kosher or work on Shabbat, some do not fast on Yom Kippur. As you cross the spectrum more of the inherently Jewish identifiers are discarded, some Jews even question the circumcision. That some Jews do not support Israel is hardly a surprise. Just as with any part of our identity, we need to safeguard the practice by educating our children properly.

This year, another anti-Zionist Jew has been named as a candidate for President of the Union of Jewish Students (UJS) in the UK. Last year such a challenger was defeated, this year a similar fate will probably await Annie Cohen.  Eventually, the earthquake may come. If it does – it will be our own fault.

Imagine beginning every religious blessing with an apology, teaching our children we have ethical conditions opposing the very ceremony we are about to undertake. How would this play out in religious adherence in our youth? This is exactly the way many in the Diaspora begin any discussion over Israel – with an explicit disassociation or apology for the State’s actions. This is especially true of Jewish community leaders.

The UK has it worse

I often see activists criticising the less than solid support given Israel by many Jewish leaders. It is true in other Diaspora communities, but worse in the UK. Jewish organisations in the UK are a unique case, built on historical discomfort. Seventy-one years ago, Jews were fighting the British and the British were fighting the Jews. You think that British Jewish organisations don’t handle it well when Israel goes to war today? Can you imagine? Oh, to be a fly on the wall in the Jewish Chronicle offices, or Board of Deputies, as the British shipped Jews off to camps on Cyprus, or the Irgun attacked the British Palestine HQ.

The Jewish press, the Jewish organisations, lived through the 30 years of British diplomatic back-footing, and even the ultimate betrayal with the 1939 White Paper. They did it all whilst remaining at the very same time, loyal British subjects. Walking that tightrope is in the very DNA of our Jewish community in the UK. It is embedded into the organisational culture of our community leadership. They are an explicit product of a very difficult situation. Today they begin almost every discussion about Israel with an apology.

I went to many Balfour celebrations, I hardly saw anyone from the community leadership at any of them. The only exception was the Zionist Federation (ZF). Given their mention in Balfour’s 1917 letter, it would be far harder for them to step aside. Having said that, they too must walk the diplomatic walk that is an exclusive by-product of the British Mandate.

The Diaspora community cannot expect to survive the creation of Israel without properly educating its young. Zionism without an apology.

You can be religious and not Zionist, you can be Zionist but not religious, but in a world where you keep neither religion, nor carry the blue-and-white identity bracelet, then what is left? A theoretical value-based system that has no adhesive to keep it together. Such a community has but generations before it dissipates into wider society.

Israel is a nation to be proud of. A nation that is navigating very difficult waters. It has a history we need to learn for ourselves and teach our children. A truth that supports Israel, is currently being rewritten with hate and lies. Israel is the Jewish homeland and a vital part of our identity. You are tagged – pass it on. If you want there to be a vibrant Jewish Diaspora 100 years from now, you had better start playing.