My research, and the book I hope to eventually complete, deals with two issues – one is the conflict between Israel and its neighbours, the other is what I view as a connected topic – the rise of left wing antisemitism. As part of the search for truth and in the hope the conflict will someday end, I go to events to gain a better understanding of the landscape, and to describe this terrain to others.

I am not hostile to the Arabs of Ramallah and Gaza – far from it. I spent many years working with them, building bridges, and both welcoming them to my home, and being welcomed into theirs. There is however an international industry that has been built around them. An industry designed to artificially perpetuate the conflict, and I see this as the fundamental issue that must be addressed if peace is to be achieved. Left-wing antisemitism is rising in part as a product of that industry.

So I go to events to research, and to learn. It was with interest then, that I saw an event taking place in Westminster that had been organised by an NGO called the ‘EuroPal Forum’.

The event and the invitation 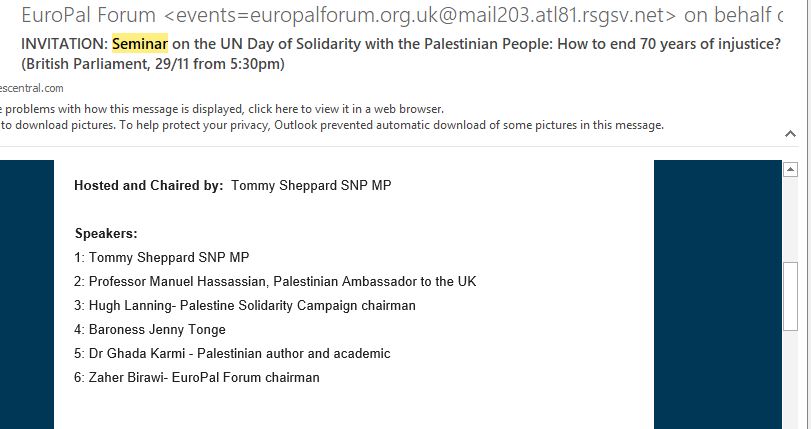 The event title is a fascinating one: ‘How to end 70 years of injustice?’ For me, this question touches on the issues that underpin my entire research. In an ideal world, an event such as this would bring the two sides together, away from the actual conflict zone, to try  to begin to build bridges of understanding. The ‘industry’ though, wants no part of that. It speaks for and on behalf of the Arabs in Ramallah. Just as it has been doing for almost 100 years.

EuroPal, the event organisers, are one of countless NGO’s that operate to sustain a conflict. Just as UNRWA were developed to ensure no refugee would ever settle, these NGO’s, that are funded via Western governments, the EU or from inside the Arab world, spend their existence, not helping Arabs improve their lives, but rather, setting up impossible conditions, and then using the resulting impasse as a window of opportunity through which to create anti-Israel hostility.

Speaking at the event, are the type of people I recognise as central to the problem, those who live in a Western Democracy, holding the Arabs of Ramallah hostage, until their own personal scores can be settled. Just what does Tommy Sheppard, Hugh Lanning or Jenny Tonge stand to lose, if the economy of the Arabs in the West Bank crashes as a result of boycott activity? The answer is absolutely nothing. In fact, such suffering would probably help their cause. Just as Arab leaders goaded the Arab residents of British Palestine, into losing everything in hopeless gambles, still today people engage with their own personal fetish from the luxury of their Western homes, and people somewhere else have to pay the price. They call it ‘seeking justice’ to hold entire cities hostage to their demands.

So I registered for the seminar via Eventbrite and received a confirmation. Below is a copy of the ticket I received in the confirmation email:

Did they cancel those with Jewish names?

Six days after I had registered and received confirmation, and only two days prior to the event, I suddenly received an email, that informed me, my registration had been cancelled: 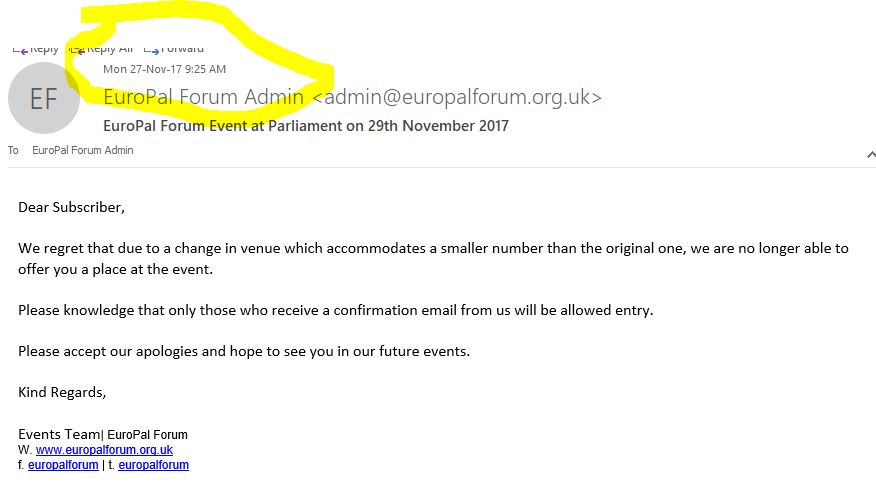 There is some truth in the email. Shortly after receiving it, I became aware the venue had changed from ‘Committee Room 9’ to ‘Committee Room 6’. I contacted the events team at the House of Commons and asked them for details about the rooms. Room nine can hold ninety people, Room six, only sixty-five. There was a possible overbooking scenario of twenty-five people.

Yet, this ‘fact’ holds the assumption the event had been fully booked. It also assumes the room change had been forced on them. I went looking for others who had registered. What became apparent very quickly, was that several of the people I knew had also had their tickets cancelled. In fact, what was alarming was that all of the online discussion of cancellations I saw, came from the Zionist side. Some people who had complained, had never been to an event like this before, so they can hardly have been on any ‘hit-list’. This implies a process of going through the list picking out Jewish sounding names.

Within the anti-Israel camp, I did not see a single comment to suggest anybody had been de-registered. It seems to have been a very careful de-selection process. One that is clearly discriminatory.

Because Eventbrite kept sending reminder emails, even to those who had been de-registered, the event organisers sent an email out telling everyone to ignore them. The event organisers also changed the web-page of the event, informing people that only those receiving an email of confirmation, actually still had a ticket.

As bad as a discriminatory de-selection process is, all of the above is built on the assumption that the room is fully booked, the room change was forced, and the cancellations were still an unfortunate necessity. So what would happen if the organisers were approached for another ticket? This time by someone without a Jewish name. So I sent an email to the organisers, asking for a ticket. I did this at 10:26 am on the 27th November. This was just one hour after I had received the cancellation email.

Given, that so many people (as many as twenty-five) had been turned away because of an over-booking, there is no way such a ticket could have been available. But sure enough, on 28th November, a day later, I received the confirmation. My secondary approach, with the non-Jewish name, had got himself a ticket:

So although they had spent some time sifting through the register, apparently cancelling the registration of anyone they could identify as Jewish (who isn’t on their list of ‘good Jews’) , they were still handing out places to other people. I did try to contact the organisers again using my real name and email to see if space was available – on that occasion, my email was simply ignored. My artificial ‘non Jewish’ creation had been through no such trouble.

The Palace of Westminster

This event isn’t a private function at some scout hall in Brentwood. It was a public event, in Committee Room 6 in the Palace of Westminster. This is the heart of the British Democratic Estate. Taxpayer financed. The room can only be booked by an MP. On what grounds was I excluded? My race? My religion? My political opinion? Whichever one you pick, it is unacceptable. But surely, some of those people who were excluded cannot have been excluded for any reason other than their Jewish sounding name. Which particular MP has put his name to such discrimination? Who funds the NGO behind it?

As an excuse for their discrimination, they may suggest I am a trouble-maker. Except I never cause any trouble. I engage in research, I am a freelance Journalist, and a member of the NUJ. When it comes to attending events that assist in my research, I have never caused any trouble anywhere. There is not a video, a complaint, or a single witness who has ever complained about my behaviour. Although I prefer to capture audio and /or video to assist in reporting and research, if I am told it is not permitted, I resort to writing notes. My ‘bad behaviour’ is writing things they don’t like.

In any case – some of those rejected from this event, are unidentifiable beyond the wrong sounding or Jewish name.

Jewish people are being picked on, and just as is taking place in France, the authorities here are choosing to have a ‘quieter life’, by caving in to antisemitism as an acceptable form of discrimination. Perhaps when it occurs in the NUT headquarters at an AGM of the Palestine Solidarity Campaign, or at the QEII building at the Palestine Expo, you can shrug your shoulders. But when such unacceptable discrimination reaches the Palace of Westminster, then it is surely time to ask what is coming next?