The Hezbollah flag is a symbol of murderous hate. The flag drips with the blood of its innocent victims, is etched with the tales of numerous terror attacks and is washed in the untold misery inflicted on those that disagree with the radical Islamic Shi’a ideology of the group it represents. The flag carries the image of a weapon, an ‘in your face’ statement of the way this group imposes its demands. Where it is waved, it carries a message of intolerance, of violence and of regressive attitudes that are totally alien to modern society. It is held up by those who do not respect our values, who do not believe in peace or equality and by those who simply hate Jews. The flag has no place in western society and it remains diametrically opposed to our way of life. When a Jewish person sees this flag held high, he sees in it confirmation that people support a movement that want to kill him, just because he is a Jew.

The UK government should be ashamed that this flag is waved on London’s streets.

Al Quds 2018, Hezbollah are back in town

Yesterday was 10 June 2018. It was al-Quds day and Hezbollah flags were to be waved in London again. This particular event, held near the end of Ramadan, was introduced by the Islamic Republic of Iran in 1979.  I have experienced them before. In 2016, as part of my undercover work, I marched with the Hezbollah through the streets of London as part of their demonstration. In 2017, after I had become ‘recognisable’, I donned a Keffiyeh to hide my face and walk with them again.

This year was more complicated and I wanted the freedom to be able to move around the streets without the police stopping me on every corner. I carried my disguise if I needed it, but chose to remain for the most part  as someone on the outside looking in.

For me the greatest irony of the day was the fact that just a few hundred yards away, as the Hezbollah haters were setting up their stage, thousands of women were taking part in a march to celebrate 100 years of suffrage for women.  The contrast between progressive and regressive, between hope and hate, could not have been more clear. 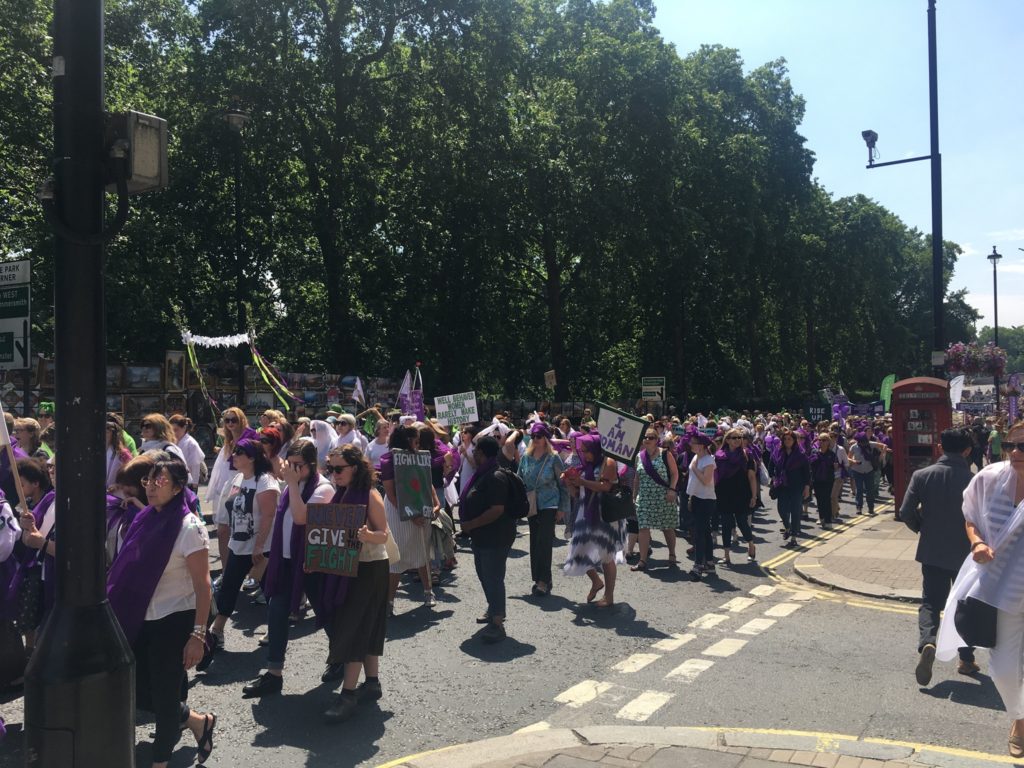 I arrived early outside the Saudi Embassy, the venue for the demonstration, having wanted to watch the separate groups arriving.  Security was everywhere. This was an expensive police exercise and given the number of narrow streets that led to the small strip that contained the demonstrators, I imagine it was a logistical nightmare to keep all the players apart.

As I wandered around I realised that this year there was another element in the mix. I came across several local pubs with members of the ‘Football Lads Alliance’ (FLA) or True FLA hanging around outside. What raised my suspicion that they were here for the demonstration was the fact that they were all surrounded by police. As they eventually started to make their way towards the demonstration, the police worked to keep all three groups (The Zionist Federation, Hezbollah and True FLA) completely separate. Whilst the ZF and Hezbollah were face to face near the gates of the embassy, the FLA were held at the tail end of the Hezbollah demonstration.

As 15:00 approached the two main crowds began to gather and the small ‘no-mans land’ in the middle was temporarily accessible for those wanting to directly face the opposition. It was there that Mick Napier appeared before me. Napier is the head of the Scottish Palestine Solidarity Campaign and was engaging in a ‘live feed’ onto his Facebook Page. Napier soon recognised me, from the work I have done investigating antisemitism inside his organisation. He made a few snide comments and moved on.

Napier spoke at this Hezbollah event. It never ceases to amaze me how people who pretend they stand up for ‘human rights’ are willing to stand under the dripping blood of a Hezbollah flag. But then Napier is rarely standing far from hate.

The counter demonstration organised by the Zionist Federation, was well attended. They have suggested there were 600 in attendance, although by the time these numbers peaked, I had already moved on, off to search out a further group of Jewish people intending to counter protest.  In all the numbers on the Jewish side dwarfed the attendance of previous years and follows an emerging pattern that suggests we are witnessing the birth of a far more mobilised Jewish community.

Speeches, hate and the usual faces

The demonstrations followed the usual pattern. The Al-Quds demonstration had speakers delivering messages of hate that blur into each other. Napier spoke. So did Stephen Sizer. Between the speeches on the pro-Israeli side, there was singing and dancing. The speeches on the ZF side were more in anger at the presence of the Hezbollah flag. Maajid Nawaz and Matthew Offord delivered two powerful speeches. In the dividing ‘no-mans’ land section, the sounds merged, making so much of what was said indecipherable. 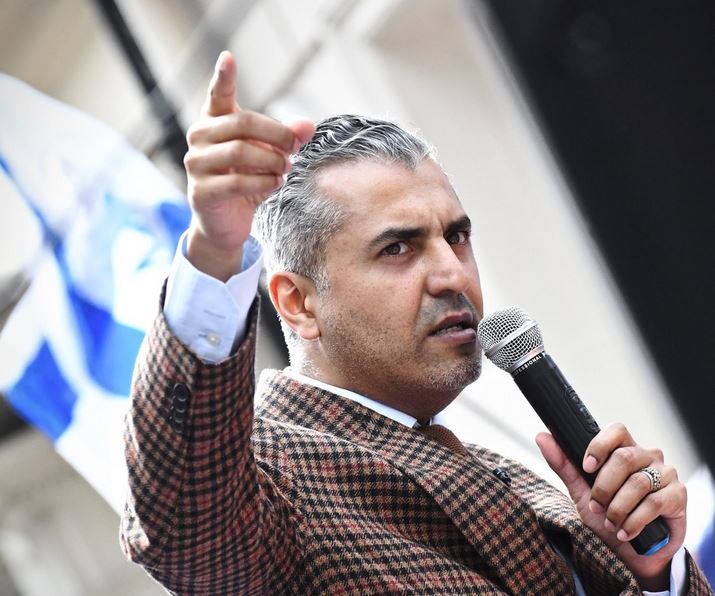 Walking alongside the aL-Quds demonstrators, there were many recognisable faces. Mick Napier of course and Stephen Sizer. I saw representatives of the In-Minds crowd too. Tony Greenstein was there. This is the odd marriage that occurs when radical Islamist ideology takes to the streets. Just what is it that attracts non Shi’a Muslims to march under the flag of the Hezbollah? The answer is simple – when a flag dripping with antisemitism is flown, it comes as no surprise that it acts as a magnet for those also dripping with twisted hate.

Just a couple of the many of those I recognise from my research. Sarah Wilkinson and Kajsa Anckasrtrom. Both picked up in my report on the Palestine Solidarity Campaign.

And a reminder of their anti-Jewish conspiratorial views:

Last year a group of pro-Israelis had successfully managed to stop the march as it arrived at Oxford Circus. This year the organisers had changed the format, holding the demonstration first before the march towards Westminster. This led to some confusion. Nobody knew when exactly the march would begin. It also led to a question of what the route of the march would be. What was certain was that a group of Jewish activists would attempt to stop the Hezbollah flag being marched through London’s streets once more. To this end, a separate group of about 60 Jewish activists had gathered near Green Park station to wait for them. These numbers would swell. In total about 120 activists took part in the attempt to stop the march.

What crawls out of the woodwork

Situations such as this always result in Jews being attacked by others. Jews are suddenly visible and a target. One such conversation that occurred yesterday is in the edited video below. I do not know if this woman was part of the al-Quds rally or if she was simply so incensed by proud Jewish people on London’s streets that she felt the need to attack them. In any event, it is fair to say this woman is an antisemite.

The cat and mouse game

That conversation occurred as we were waiting for news about the march. Thus began about 90 minutes of a cat and mouse game. The police had ‘clocked’ this large group of people standing near the Ritz Hotel and began to make plans to counteract any attempted disruption.  Jonathan Hoffman delivered the quote of the day when he said that the group had to remain ‘inconspicuous’. To place this in context, an image of face-painted Jonathan at the event is required: 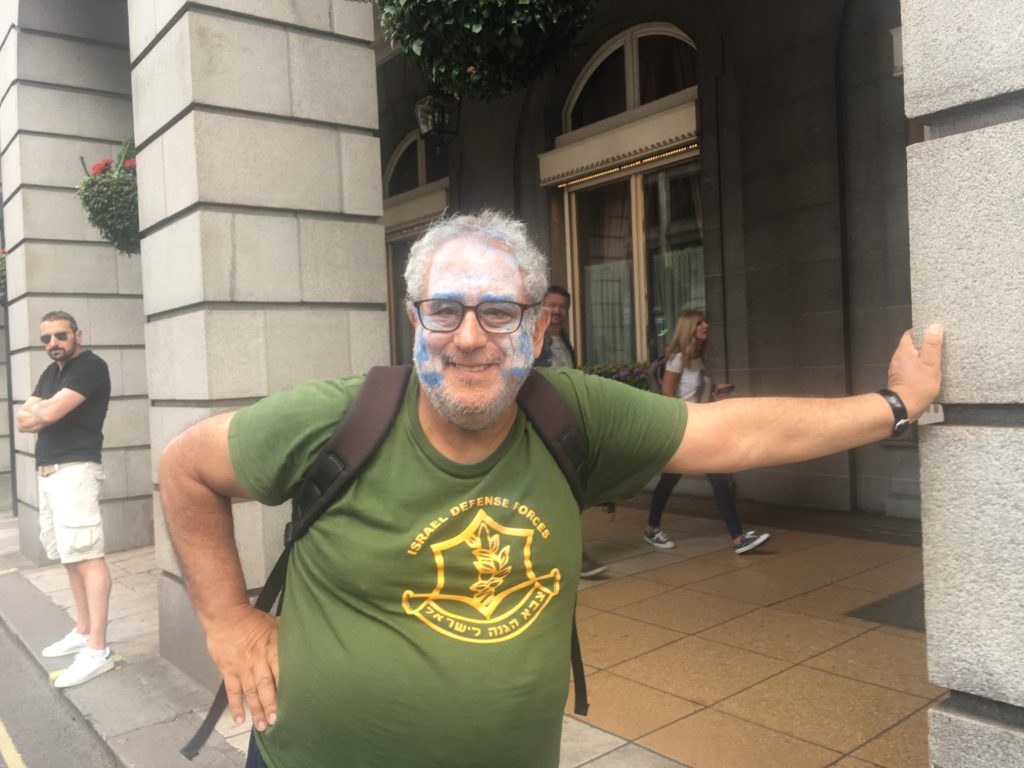 (Dis) information was given out to those waiting that perhaps there would be no ‘march’ at all. The police also moved personnel close to the group with the aim of containing them on the side of the street, thus restricting their ability to interfere. Yet every time there was a large enough police presence, the Jewish activist group simply moved to a different corner.

Stopping the flag from marching

Eventually the demonstration ended and the people began to march. They did not get far. In fact they couldn’t move at all. The first group of Jewish counter-protestors was blocking their way. Or at least in the very beginning, it was Mark Lewis in his wheelchair. 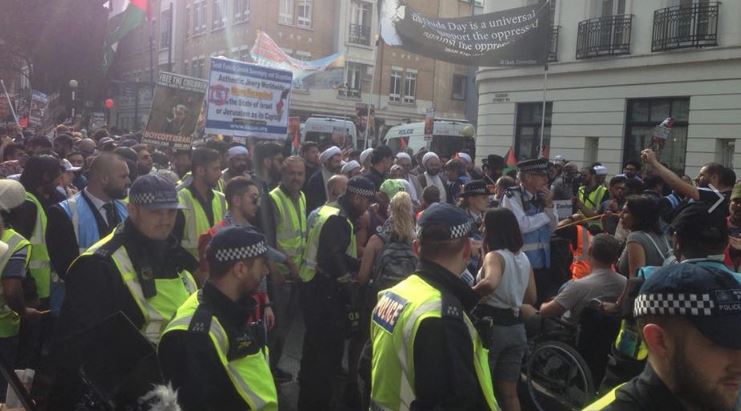 Jewish activists had travelled from the North and South of the UK to register their anger that Hezbollah flags were on London’s streets. After a considerable delay the demonstrators began to move, at which point a larger Jewish group gathered together in-front of the al-Quds crowd. Blocking the street. The police response was hindered by the narrower streets and it took them a while to reorganize. Frustration continued to grow in the al-Quds ranks.

These proud Jewish counter-demonstrators were heroes. Every one of them. It is not a simple thing to do, to walk in front of marching hatred. This is not what most of those participating normally do with their Sunday afternoons. But history has decided that our generation is one that will need to stand its ground. These people were not found wanting.

The police did manage to temporarily split the Jewish group, but the deed was done. There were Jewish people being pushed back as the march progressed. From this point on, those at the head of this march were waving Israeli flags. 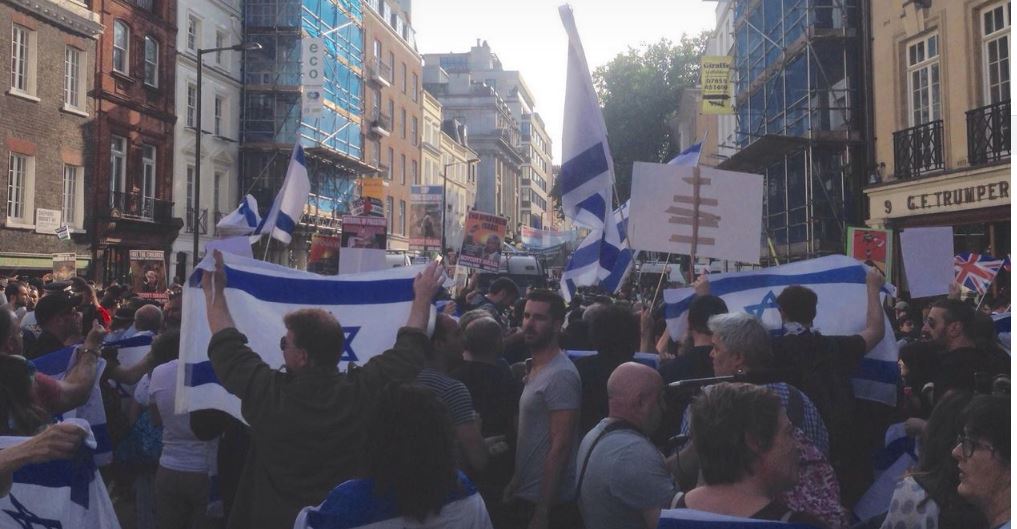 Despite police efforts to direct them away from the demonstration, those who had been separated rejoined the counter-protest when it reached Piccadilly. The demonstration was held up again. In total the Jewish protest managed to delay the march by 2-3 hours. It was in Piccadilly that the visual effect of the counter-demonstration became most apparent. Anyone watching the demonstration pass would FIRST see the Israeli flags, watch the Jewish demonstrators singing and dancing and hear the chant about the terrorist flag of the Hezbollah. It was an impressive action that delivered considerable success.

(Important to note that many non-Jews also demonstrated against the hate. Coming out in solidarity with the Jewish counter-protest)

Not a happy bunch

A few ‘welcome’ responses from the ‘dark side’ 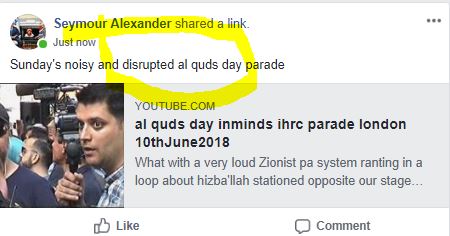 One thing is certain. If those who wave the Hezbollah flag were not happy, then the Jewish counter protestors should consider it a sign that part of the job was well done. The more important part of the work is still to be finished. To ensure that this vile flag is not waved in London again. It really is time to get those terrorist flags ‘off our streets’.