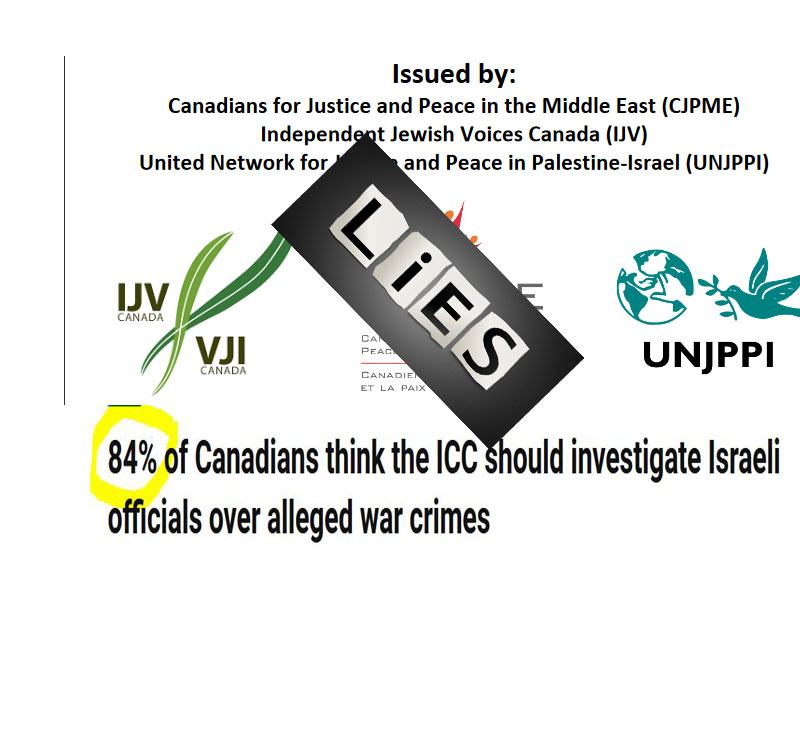 Ekos Research Associates is a social and economic research company in Canada run by Frank Graves. They have just put their name to some rather vicious anti-Israel propaganda.

Long before anyone in the UK knew who I was, I put a comment under a Tony Greenstein blog pointing out a truly glaring factual error. Greenstein’s response was to delete my comment. This type of action speaks volumes and this event was part of my awakening into understanding the real danger these people pose. Who deliberately lies but those that set out to deceive?

Their need to spread lies is the key reason behind their refusal to engage or debate. It is why they block people like me on social media. We have nothing to fear from the truth – they most certainly do.

Which brings us to their methods. One of the more intelligent ways that they spread disinformation is through twisting surveys. They have long understood that if you ask the right question, you will get whatever answer it is you are looking for. A skill they have just put to good use in Canada. According to a recently published survey carried out by EKOS almost every Canadian thinks Israel should be investigated for war crimes:

84%? Almost nothing is ever as high as 84% and certainly not Canadian animosity towards Israel. We know this is not true – so here is how they did it. A story of how Ekos Research Associates put their name to anti-Israel propaganda.

The bad, the nasty and the even worse

UJPPI have a FB page with 184 ‘followers’. Their Twitter account has 132 ‘followers’. Their posts and tweets generally remain unsupported. Of their last 15 tweets, two received a single like, the other 13 got none. Their Facebook page is equally dormant. Their blog has numerous outrageous posts, even coming out in support of Linda Sarsour.

I searched to see if I could find any names publicly and currently attached to the group but found none on their website. In fact, their last UJPPI news update was in 2013. From older posts I gathered several names, such as George Bartlett, Jan McIntyre and Patricia Mercer. I recognise their stories as similar to those that some church adherents have undergone in the UK. They go to the region as part of a propaganda driven Ecumenical program. They are hand-held, shown what they need to see and sent back – ready to become advocates for the cause. Tiresome do-gooders, naive and normally embedded in replacement ideology. References to the Kairos Palestine Document litter the UJPPI website..

Unsurprisingly, George Bartlett in Canada is a Facebook friend of our very own Christian antisemite Stephen Sizer. That gives a strong indication of what we are dealing with here. These are a group of people who have been duped and are all members of the United Church of Canada. Little more than a small elderly bunch of white Christian folk, who read the Christian bible in a particular way and don’t like the Jewish state very much.

IJV are the Jewish enablers and provide the perfect cover for what is an antisemitic ideology. One of the key activists in IJV- Canada is Rabbi David Mivasair, who has been an active member of the toxic FB group Palestine Live for years. In 2019 I exposed how he casually hangs out with Holocaust deniers and other rabid antisemites in the group. IJV’s National Coordinator is currently Corey Balsam. Canada’s Jewish population is about 400k, which means they probably have a few hundred active anti-Zionist Jews. Like groups in the UK such as J-BIG, JVL, Free Speech on Israel and so on, they are a small group of individuals who go on a lot about how numerous they are. They are popular with Israel’s enemies because they provide them with legitimacy. Everyone inside the Jewish community knows what fringe, irrelevant groups they are.

CJPME say they are for ‘Canadians of all backgrounds to promote justice,’. Of course there is nothing in their website about justice or rights for Jews. CJPME are another type of group we recognise. Obsessed with ‘Islamophobia’ and dismissive of antisemitism. Just two years ago Canadian PM Trudeau condemned a board member of CJPME for making ‘vile antisemitic smears.’

In reality CJPME is little more than an excuse for people like Osamaa Abu-Shihab, Nadia Abu Zahra, Jeffrey Ayoub, Azeezah Kanji and Monia Mazigh to attack Israel. The position page on the website is almost all about Israel or Islamophobia. Why people are so dense as to not see through these pro-Islamist groups never ceases to amaze me. CJPME even produced a paper that seems to imply Canada should have built a relationship with ISIS.

Their resource page for students is also almost exclusively about Israel. It’s page on the Muslim Bortherhood does not mention the word terrorism. Nor does its page on Hamas, which reads like a promotion of the group. They even try to suggest Oslo period Hamas attacks only began inside pre-1967 Israel after the Baruch Goldstein massacre in Spring 1994 – which they didn’t – for example Hamas murdered Yigal Vaknin on Sep 24 1993 on a Moshav near Raanana in Central Israel. But reading through the sheet you soon realise that is the general strategy of the story. Hamas are portrayed as the ‘good guys’.

So these three rancid groups got together to commission a survey about Canadian attitudes towards Israel. Was there any doubt what the result would be?

A tall Canadian tale from EKOS

The EKOS survey results were impressive, and the newly published propaganda spread at lightning speed across the anti-Israel activist world. (see examples here and here) How they love new material.

The only part of the EKOS story I have failed to uncover is who wrote the questions. Because that is where the deception is. – this is an example of a question EKOS asked:

When a country is accused of / Given that Israel has recently been accused of] serious human rights abuses, and the International Criminal Court (ICC) at The Hague is asked to carry out an investigation, do you think the government of Canada should consider stepping in if it is opposed to the investigation?

This question is ridiculous. The questions were asked as a split sample. So half were asked in a generic fashion, half were asked explicitly about Israel. There was little difference between the responses of the two samples. There was a slightly greater resistance amongst Conservative voters, which is understandable as they are more likely to be aware of the anti-Israel obsession inherent in some of these international organisations.

The questions are extremely leading – and it would take real knowledge to respond ‘no’ to any of this. Which means the survey only discovered that roughly 84% of Canadians basically believe in justice being served. All things being equal Canadians think that those accused of serious human rights abuses should be investigated. Which is a good and expected finding. I mean – who doesn’t?

At no point in the survey is the integrity of the ICC questioned or doubts about its standing expressed to those responding. All of the questions in the survey are loaded in a similar anti-Israel fashion and leading those responding all the way to the result these groups knew they would be able to manufacture. Imagine if we reworded the question above and presented it to the same people:

Like the UN, The International Criminal Court (ICC) at The Hague is accused of a growing bias and obsession with our allies / Israel. Do you think the Government of Canada should consider stepping in if it becomes concerned that justice is not being properly served?

That is a question which would probably turn the roughly 84% mentioned in the EKOS survey in Israel’s favour. If we were as manipulative as those who promoted this survey, we could then run a headline which reads ‘84% of Canadians think Canada should step in to stop the ICC investigating Israel’. It is that easy to skew a survey.

As I said in the beginning. The fact these groups need to manipulate people in this fashion suggests that the truth does not support them. When you see EKOS produce these type of survey results, it is always worth remembering that. As for those stupid enough to share this kind of material, I don’t know whether to argue with them or pity them.