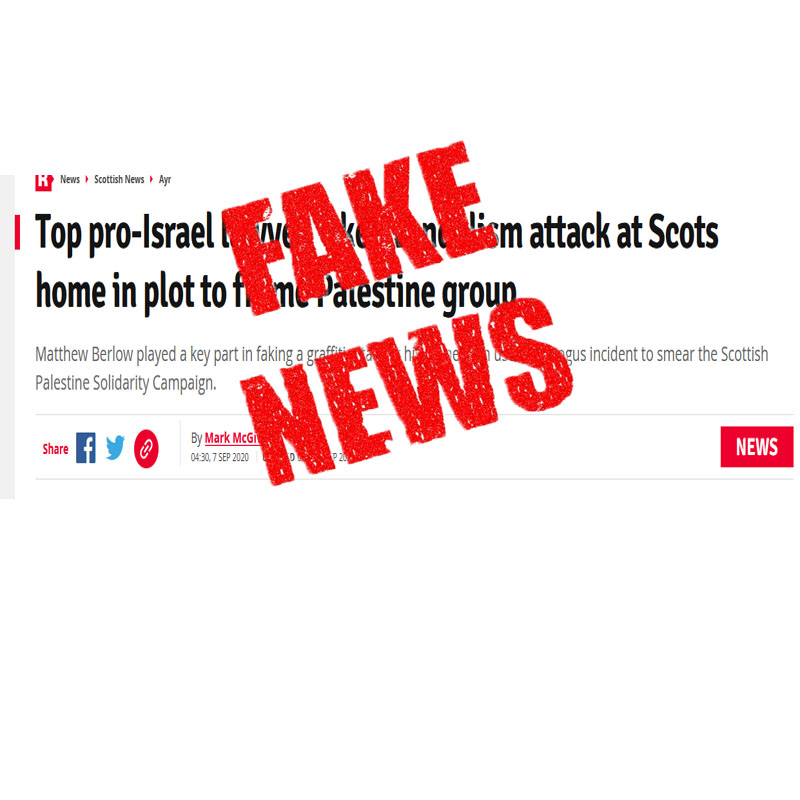 Open letter to Mark McGivern at the Daily Record – the Berlow injustice.

I am a stickler for justice and truth. Seeing an injustice motivates me. In the last week a Jewish lawyer in Scotland, Matthew Berlow, has been badly stitched up in an article written by Scottish journalist Mark McGivern. The headline read “Top pro-Israel lawyer faked vandalism attack at Scots home in plot to frame Palestine group“, but considering there was no vandalism attack, nor a plot to frame a Palestine group’ I believe it fair to call this a rather blatant stitch up.

So bad has the reporting been on this, that I have yet to speak to a person who did not believe Berlow’s house was actually vandalised. Not one.  This is important. Few read beyond headlines. That article will be used 100,000s of times in the coming years. It will fuel antisemitism and every time there is an attack on Jews it will be held up to suggest we do it to ourselves for political gain. I predict that by 2025, that pointless little story about a stupid Facebook comment will be the Daily Record’s most shared article, *ever*. In a world of rising antisemitism, fake news and click bait, Mark McGivern struck the jackpot.

I will not recount all of the background of the story here, as Jonathan Hoffman laid out much of it in an article he published yesterday. It involved a father and son team, both of whom I believe are under active investigation involving the police and Scottish Law Society. Berlow was harassed by the pair for years and attempted a ‘sting’, not to ‘frame’ the clearly antisemitic Scottish Palestine Solidarity group, but to bring his allegedly antisemitic abuser out into the open. It worked too – not that you would know any of this from the McGivern article.

In private messages exchanged, between a fake Facebook profile and the ‘father’ in the father and son team, it was the father, Neil McPherson who reached out and made contact with the ‘sock’ account. It was McPherson that handed the sock Berlow’s physical address and McPherson who even offered to help out if the attack were to take place. It was McPherson, the abuser, who was clearly the target of the sting.

McGivern and the activist war

What is shocking here is that the journalist, McGivern, had all this evidence prior to the hit piece he wrote on Berlow. In effect, McGivern bashed the victim, McPherson even boasted about this feud and the public hanging of Berlow on his own Facebook page, ending his gloating post with the words “be careful who you fu.. with“. The antisemite wins and the Jew has paid the price for messing with him. In itself, this post is evidence he takes ownership of the episode.

The activist war is a dirty one. Those on the front lines often pay a price. The central pillar of the story that hung Berlow out to dry was the result of a ‘sock account‘. There are as we know, 100s of anti-Israel activists dressing up as Jews. Almost all of our groups have unwanted hidden guests. Twitter is inundated with non-Jews pretending to be Jews to undermine the voice of Jewish posters. None of this is pleasant, but it isn’t news. I had a sock, it is how I uncovered Corbyn in Palestine Live. Which is why the exposure of an obscure non-Jewish (but pro-Israel) activist who had set up an account to access information about a Scottish anti-Israel group wasn’t really news either.

Except Scotland is Jew-hostile. The head of the Scottish Palestine Solidarity Campaign can literally introduce a non-Jewish Holocaust denying antisemite as a voice of Scottish Jews on the streets of Edinburgh – and nobody says a word. There is no press, no interested journalist and no article. Nobody cares if Scottish Jews are ridiculed and their voices silenced in this fashion. The SPSC clearly have friends in both media and politics. On the other hand, a Jewish activist makes a move and not just the press, but Scottish professional bodies pounce, to make sure the Jews wrong deeds are exposed, thoroughly publicised and punished. As always it is only the Jew who is hung out to dry.

Jews also suffer from a diaspora mentality. Berlow isn’t entirely clean here, but nor is he deserving of what is happening. There is clear injustice, but as soon as a Jew runs into trouble, we scurry to the corners to hide in the shadows. Nobody comes out to defend or support him. In this manner the enemy can take us out one by one. This has never been my way. I will always stand up against injustice and always fight for the truth to be told.

I am still researching this story. As part of my research I sent an email to the journalist Mark McGivern, the journalist at the Daily Record asking a few questions. Having given him a second chance but still received no response whatsoever – I am publishing the email in the form of an open letter.

I am an investigative journalist based in London who does a fair amount of reporting on the situation Jews find themselves struggling with in Scotland. Last week your paper published an article you had written about Matthew Berlow with a headline that was both misleading in part and fundamentally untrue in another.

Reading through your article you have clearly omitted vital detail from the report issued by the LSS reporter. So my primary question would be

1. had you seen the whole report, or were you only given access to specific elements?

However I have also seen ample evidence to suggest you were well aware of the true nature of this event prior to the publication in your newspaper. Given evidence presented to you, in email, message and on the phone, you must have known this was not a plot to discredit the SPSC AND must have known that the person involved was actually being hounded and targeted by someone who clearly seems to have antisemitic motivations. You were even contacted by an ex-editor warning you of the problems with the story you were pushing.

2. Why did you choose to dismiss the clear evidence given to you prior to publication and run an attack piece on Berlow anyway?
3. In your conversation with Berlow you refer to his problematic state of mind. Do you think victims of harassment and racist abuse have a duty to remain less emotional?

I found the idea anyone could discredit the SPSC as somewhat amusing. The deeply troubling antisemitic nature of many of their key activists has been widely publicised in Scotland. But not in your paper. In fact, I did a search and whilst there were many references to the SPSC, there was not a single negative story.

4. Do you have any idea why your paper has never run a negative article about Mick Napier or the SPSC?

As I understand it, Berlow made a clearly errant and regrettable comment in response to a FB post, for which he is being punished, that as you know, was made as part of a sting against someone who was harassing him. You turned that into a ‘bizarre plot to discredit a Palestinian pressure group.’ Which in turn became propaganda fodder for antisemites globally.

The group Scottish Jews against Zionism is promoted by the SPSC as the voice of Scottish Jews. The public face is a Polish / Ukrainian antisemite, Holocaust denier and non -Jew, who blatantly lies about her Jewishness in order to discredit the voice of actual Scottish Jews. She shames them and tells them to ‘look in the mirror’. The group has now been operational for two years.

5. Don’t you think this ‘fake-Jew’ on the street plot is somewhat more substantive and sinister than a single FB comment?
6. How do you think Jews in Scotland feel when they see her on the street being publicly applauded by groups like the SPSC whilst newspapers such as yours turn a blind eye, only choosing to attack and smear Jews that try to respond?
7. Do you have any idea why a paper such as yours would never publish such a story?

The people accused of threatening and harassing Berlow are two lawyers in Scotland. Both have been in trouble in the past – a history easily searchable online. Except for your newspaper. In your paper, the only time their names are used is as a quote or in a positive light.

Sources are obviously sacrosanct, but only two people could have provided you with this story. Someone running a deeply antisemitic organisation or an apparent antisemite who threatens Jews. On the back of this you chose to write a deeply slanted article on the Jewish person who appears to be a victim of antisemitic harassment (dismissing the evidence he was a victim before you ran the article).

9. Do you have any comment to make on this?

I look forward to hearing from you. There are two articles on Berlow due for publication in the coming days, it would be helpful if you could respond swiftly.

At the last Jewish new year, we were facing the possibility of a Corbyn led government. As we welcome the new one, the threat of Corbyn has gone and we have recently seen both the UAE and Bahrain make peace deals with Israel. A year can bring a lot of change. Even with the uncertainty of Covid, there is much to look forward to.

There is also a lot of work to do fighting for the truth. I receive so many comments and so many leads from the community. Each day brings messages pointing me in the direction of things that need investigation. I also receive a lot of warmth and encouragement. There are also those who support me through donations – and you know who you are. As the new year arrives I want to take the opportunity to wish each and every one of you – and your families and friends – and happy, healthy and sweet new year. Shana Tova to you all.

142 thoughts on “Open letter to Mark McGivern at the Daily Record – the Berlow injustice.”