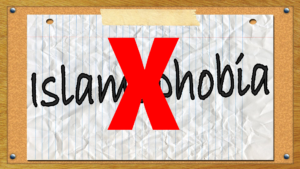 ‘I reject all forms of racism, antisemitism and Islamophobia’. No sentence dealing with inequality or discrimination today is complete without the 3 absolutes. The golden triad of virtual signalling, the triple whammy of ultimate put-downs, the ‘must have’ of any politician’s speech.

I know what racism is. The idea of racial superiority and inequality or discrimination based on a person’s race. Despite the frequent misuse of the term, racism is a vile disease that infests every society. In certain segments of the UK, it is underneath almost every rock.

I also know what antisemitism is. I see it daily. If you have reached the point where you believe the whining from the Jewish community is merely the empty cry of the ‘spoilt’ amongst us, then the proliferate seeds of antisemitism are already within you; ‘modern antisemitism’, becomes an urban myth propagated by the successful ‘tribe’.

And then there is Islamophobia, that can be defined as a ‘Dislike of or prejudice against Islam or Muslims, especially as a political force’.

Islamophobia always seemed to me to be a made up word. If the emphasis is on the ‘political force’ of Islam, then perhaps a dislike of communists or capitalists or anarchists should also be labelled with a ‘phobia’. I was born into a world that spilt much blood in forging its freedoms through the separation church from state, so what is wrong with having a little concern over Islamism?

Does the ‘bias’ that sets this apart from actual racism really need to be mentioned as a stand-alone in every political speech?  Is the person hurling abuse on the streets of London at a Lebanese Christian, an Islamophobe or a racist?

The separation of racism against an Indian or a Pakistani or an Iraqi into two distinct racisms based on the issue that some Muslims are Islamists seem odd. ‘Islamism’ is something that I believe needs to be opposed, yet how can we oppose something, if apparently, a dislike of its very substance is as bad as being racist?

My first love was a Muslim girl. Over 2 years of innovative planning and sneaking around for clandestine meetings. In the true fashion of such a teenage tragedy, our final rendezvous took place just a day or two prior to her ‘family arranged’ engagement to a Muslim man. Like many British people I grew up making friends without actually placing people into their religious boxes. It has never crossed my mind to assess anyone for anything beyond the type of human being they are. I use boxes like ‘intelligent’, ‘considerate’, ‘funny’.

Which brings us on to Nice. Bastille Day, 2016. The day I realised what Islamophobia is.

The act itself was radical Islamic terror at work. We have seen it in France, in Belgium, on the African continent, in Israel, within the Arab world, in Australia and in the United States. We see it displayed with horrifying frequency. But as anyone who has lived in Israel, ‘you aint seen nothing yet’.

And yet, as attacks such as this occur, what we witness is a formulaic response, almost across the board, to these actions. Whilst it is a caricature of the process, I think Edgar Davidson’s infographic sums this up well: 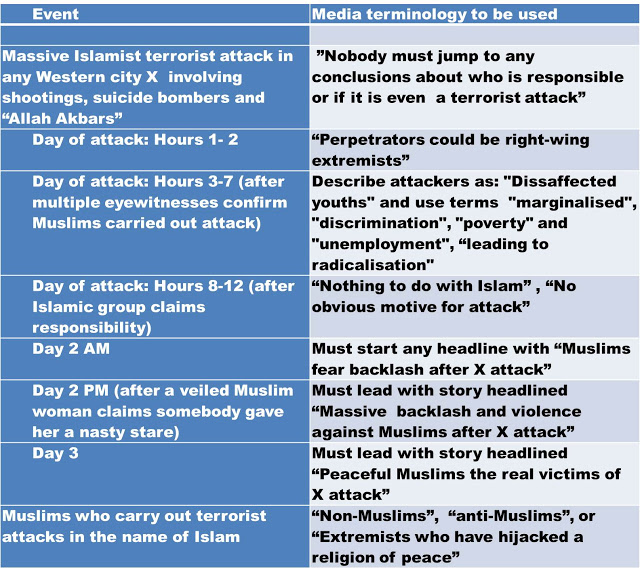 What is applied is a complete disconnect between the action, the motive and the source. ISIS has become a convenient and over-used excuse for these atrocities, and yet ISIS is merely a single expression of the problem. Even when naming Islamic State in the media, reporters add the word ‘so called’ at the beginning, in fear that anyone would accuse them of suggesting a link between Islam and the terrorists.

Why? Because of fear.

An environment of fear

This is a video shot in Nice, following the attack, by an Israeli TV network. The reporter is warned that it is not safe for Israelis. He cannot get the woman to stand in front of camera. The discussion is clearly guarded and the woman is genuinely scared about the situation. This is the way oppression and subjugation work. It doesn’t need victory in the ballot box, it claims it on the street:

Segments of society in the UK are cowed into silence. People unwilling to politically identify themselves in areas where concentrated Islamic groups have taken control. The university space is a perfect example and anti-Jewish feeling is merely one symptom.

Whether we wish to accept it or not, this is Europe in 2016. Freedom is being supressed, repressive values are being imposed, inclusion is being attacked. Don’t read this wrong. This isn’t a ‘Muslim v everyone else’ scenario, Muslims are invariably the first in line to feel this oppression. Unless this narrow extremism has already taken a grip on its environment, it doesn’t possess the strength to attack others.

The majority of Muslims become victims, lose their freedoms, just like the woman in Nice. The House of Lords school uniform case involving Denbigh High School provides a perfect example. It highlights that the inclusion of a more conservative Islamic dress by a single pupil, would apply pressure on other Muslim schoolchildren to conform.

Through their silence, the media are supporting a myth that will see us head towards ever increasing violence. In the end, we will witness radical right wing terror groups taking matters in their own hands against innocent people. This is not a zero sum game. It is a spiral, a self-fulfilling prophecy that will ironically provide these extremists with the very fodder they use to recruit. It is how the game works.

We understate the problem and disconnect the Islamic terrorist from Islam. We allow for passive extremism in society, as if only the taking of human life is an infringement of our freedoms. We turn a blind eye to outbreaks of Jew hatred, or minimise its significance.

We overstate the process of radicalisation. Both the Nice attack and the one in Germany appear to have been swift online conversions. It doesn’t need a radical preacher in the mosque, it isn’t dependant on a 3-month trip to Syria.

This position has been created out of fear, a fear born from a marriage between a failure of a social experiment and an assumed lack of options, all fermenting within the perverted façade of a human rights paradigm.

FGM is a perfect example of this blindness. Female Genital Mutilation was a geographic cultural act that has been adopted by some sections of modern religion. It is considered a human-rights violation. The only Jewish sect to practice any FGM was the Ethiopian Jew, born into the very area where FGM dominates. FGM predates Islam.

Here in the UK, FGM is practised, normally by importing a ‘cutter’. There are estimated to be around 137,000 victims of FGM living in the UK. It is against the law. The number of convictions? This from a BBC report today:

The issue isn’t one of law then, because the law exists. It is one of fear, of impotence, and of course deep-seated racism. Why shouldn’t these people have the same protections as everyone else?

So called ‘honour’ violence, against family members is also prevalent. Over 11,000 UK based attacks in 4 years. With the BBC noting in their report that “many crimes are unreported because the perpetrators are often the victim’s own family.”

Failure of the left

It is never the majority within a minority that revolts. Oppression and fear are powerful tools. Generally, a small group begin pushing for legal freedoms or equality. Rebellious elements within the minority gain the attention of progressive elements in wider society and forge a revolutionary alliance that eventually heralds change.

That is the way most of our freedoms have been gained. Until now, until Islamism. Progressive movements within Islam are actually being shunned. For whatever reason, revisionists, reformists, humanitarians within the Muslim community are knocked back, not by the right, but by the left. Our left wing organisations build alliances with radical or extreme Islamic elements and are therefore pushed towards rejecting the reformists. This is an absolute failure of the left to support the very ideals that are displayed clearly on their own flags.

Many of the more extreme Islamic groups operating in the UK are misogynistic, homophobic, anti-democratic and refuse to condemn all violence. And yet they are courted, promoted and strengthened by those who should in reality be the first in line to demonstrate against them. We have to ensure that Muslims do not experience racial hatred, that they enjoy equality, but at no point does an acceptance of Islamism conform to our vision of an inclusive society. Promoting many of the more extreme Islamic groups fosters rather than eases social tensions, especially internally amongst Muslims. Yet progressive think tanks like Quilliam which seeks to create a more self-critical approach within Muslim society have problems gaining air time or support. Which brings me to Islamophobia.

Critics of Christian society are publicly applauded and treated like celebrities. Anti-Zionist Jews are given exposure well beyond their statistical relevance to Jewish society. Yet every word regarding criticism of Islam is met with a stony silence or a rebuke. We are fed with slogans like ‘Islam is the religion of peace’, this, even as the entire Middle East burns in the flames of Islamic extremism. As Christians and Jews are told they need to take responsibility for all their actions, the Muslims are shielded behind a wall that cannot be breached. Islamic extremism is the fault of the western world, Christianity, of Israel.

It was the terror attack in Nice that finally made me realise what real Islamophobia is. It is the fear of silence that Islamism generates within society. Why does our ‘free press’ refuse to call a spade a spade when it comes to Islamic terror? Islamophobia.

The word is incorrectly being applied as a cover for Islamic extremism, through which any action, regardless of how violent, cannot be labelled as being related to Islam. Islam cannot have a problem. If we mention it, we become Islamophobic, we become targets for public rejection, or retribution. Who would want to place themselves in that situation?

The Muslim children at schools who are wearing a more conservative dress code because others in the school began to do so are Islamophobic. The victim of FGM or honour violence who cower in silence in fear of further action from a family member, they are Islamophobic too. The Israeli who cannot identify as Israeli at university, the Jew who will not publicly wear a Kippa, all Islamophobes.

Our teachers, our local politicians, our unions, our universities, they all suffer from Islamophobia. The woman in Nice is Islamophobic, not because she is biased against Muslims, but because the right to air her opinions has clearly been stifled through the effect of radical Islamic threats and violence.

24 thoughts on “The day I met Islamophobia”