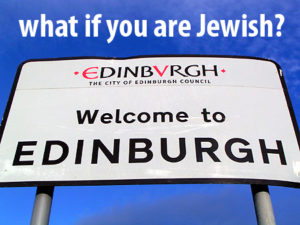 August is festival month in Edinburgh. A massive celebration, delivered through a collective of independent arts and cultural festivals. Just one of these, the ‘Edinburgh Festival Fringe’, is the largest arts festival in the world.

At the ‘Fringe’ event this year, scheduled for August 17, is the ‘International Shalom Festival’. Described as a one-day celebration bringing together Jews, Arabs, Christians and other minorities, that all co-exist together peacefully in Israel. Yet once again, as Israeli artists perform inside Scotland, demonstrations are being arranged in protest.

As far back as 1997, during the Oslo peace talks, antizionists attacked Israeli performers at the festival. In 2008 the Jerusalem Quartet concert was disrupted, in 2012 it was the turn of the Batsheva Dance Troupe. In 2014, anti-Israel activists called on the venue to cancel a show with Israeli performers, and local police forced the venue to incur additional security costs. In turn, the venue demanded additional funds from the performers.

So in 2015, Haaretz reported that for the first time in years, Israeli performances were not hosted at the festival at all.  This silencing of the Israeli voice is celebrated as a victory by the anti-Israel activists. The voice that seeks dialogue and accommodation is being silenced.

The festival is not the only place in Scotland such opposition is seen, less than two years ago a worker at an Israeli cosmetics stall in Glasgow had a ‘burning liquid’ thrown at her. The university space is also rabid, with events being called off due to protests, and Jewish students at universities are “denying or hiding” their identity because of discrimination. These events, including the protests at Edinburgh, are all connected.

Yet here is a simple fact. Israel is by far the most diverse nation in the Middle East. Despite the accusations of the protesters, there is not a single nation in the region that is as free, as democratic, as liberal or as diverse as Israel. Not one. What else sets it apart from all of its neighbours though, is another simple fact. It is the only nation in the world that is Jewish.

According to the 2011 census, there are just under 6000 Jews currently living in Scotland and this year marks 200 years since the first Jewish congregation was founded, ironically in Edinburgh. But in reality, how welcome are the Jews in Scotland? When I use the word ‘welcome’, I don’t refer to the lack of a Hitlerite doctrine, or wish to gauge whether gangs of antisemites seek out symbols that adorn Jewish houses to begin targeting the inhabitants. I simply ask how free are Jewish people to celebrate their Jewish identity publicly?

Which brings me back to the Edinburgh Fringe Festival. The protesters suggest that Israeli money is funding the Shalom Festival and then embark on a sickening exercise to follow ‘Jewish money’, from the organisers back to the embassy of the only democratic nation in the Middle East.

So what is this protest, anti-Israel or anti-Jewish? Well primarily, it is clear that the protest is anti-peace. The essence of the Shalom Festival is co-operation, the diverse and inclusive nature of Israel. And support for dialogue, the underpinnings of the international position over a two state solution. What the protesters are standing against isn’t a settlement or Israeli army action, but rather a core element of Jewish belief – Zionism. The very existence of Israel.

There are two connected elements to Zionism, the religious and the political. Zionism is on almost every page of the Jewish bible, the land of Israel, the national home of the Jews. Carried with them throughout centuries of persecution, the religious aspect became political reality as Israel was founded as a state in 1948.  A fundamental shift in Jewish history.

93% of UK Jews believe that Israel plays a part in their Jewish identity, 90% believe in Israel’s right to exist as a Jewish state. Let me put this into perspective. Proportionally more UK Jews identify Israel as being part of their Jewish identity than UK Christians go to church, UK Muslims eat Halal or UK Jews who eat kosher. As a statistic, it would be hard to find any element of any religion that is as prevailing as the Jewish/Israel connection.

If a nation boycotted all Easter celebrations it would be considered religious persecution, so too banning or restricting the sale of Halal meat. Thus, although the theoretical opposition to the existence of a Jewish state may not cross the line, in actually boycotting the state of Israel and calling for its destruction, we are witnessing clear antisemitism in our midst. No surprise then, that the Jews become intimidated, frightened and unable to display their identity in public.

To counter this, the antizionists create a smokescreen around Zionism. Turning it from the realisation of national identity, into a description of some of Israel’s actions beyond the 1967 lines. They then use the small minority, the 7%, wherever they find them, to deflect all accusations they are being antisemitic. Illan Pappe, Ronnie Barkan, Max Blumenthal, can be no more legitimately used to strike against Israel, than you would find support for using a strange Christian sub group who deny the existence of Jesus. Their very use is an antisemitic act. Only with the Jews, only with Israel, do the 7% get given a microphone, a stage and finance.

To be an antizionist is to reject not just the religious and national elements of Zionism, but to reject international law, denounce democracy and side with the misogynistic, anti-liberal, anti-democratic, antisemitic neighbours that even today, seek to remove Israel from the map. Israel is the only nation in the region where all religions practice freely, the only one with a growing Christian population.

You can oppose Israeli political actions, you can support the Palestinian right to a state, and you can support Israel’s right to live in peace. This isn’t an either/or. Even terror groups such as the IRA in seeking an united Ireland, did not seek to destroy England. When it comes to pushing radical extremism, these protesters are off the map. They should not be allowed the unchallenged air of the mainstream. They have to be opposed.

Stand up and be counted 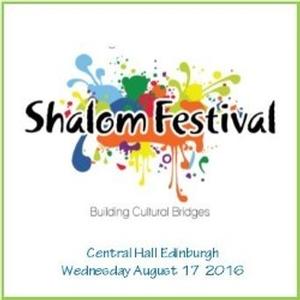 These people need support, this peace festival needs support. If we are ever to see real peace between Israel and all its neighbours, then we have to start supporting those movements that seek accommodation, negotiation, peace. The International Shalom festival is such an event.

We are a free society and we cannot stop a public protest in Edinburgh. What we can do is marginalise it, by highlighting the side that stands up for our values, those of peace, freedom, democracy. We need to stand by those who offer the promise of peace and reject those who beat the drums of perpetual war.

This Shalom Festival in Edinburgh needs your support. It promises to be an invigorating, fascinating insight into the life of Israelis and the vibrant diverse democracy that exists there. If you cannot make it, or will not be at the festival at all, it needs your vocal support, pass on the event details to your friends, bring it to the attention of others.

And if you are a politician, if you are the leader of the Scottish National Party, you need to choose what type of Scotland you wish to represent. So to Nicola Sturgeon I say this: You clearly want Scotland to be an independent Nation. So you need to stand up and publicly state that this festival, this inclusive celebration of diverse culture, is open to everyone. You need to give the International Shalom Festival your support. Don’t you think you need to show us just what type of independent Scotland the Jews can expect? Or are Scotland’s Jews only protected by Westminster?

So Nicola, are Jews weclome at the Edinburgh festival? Not shadows of Jews, scared to express their identity, looking over their shoulder, worried about what they can and cannot say for fear of persecution. But real Jews, proud, Zionist, Israeli flag waving Jews. Jews that are free to walk in the light. Are they welcome?

Do Jews in Scotland really have to hide every time they wish to celebrate the vibrant democracy that is Israel? Will you really accept the denial of such a fundamental part of their Jewish identity?

7 thoughts on “Nicola Sturgeon, how welcome are Jews in Scotland?”