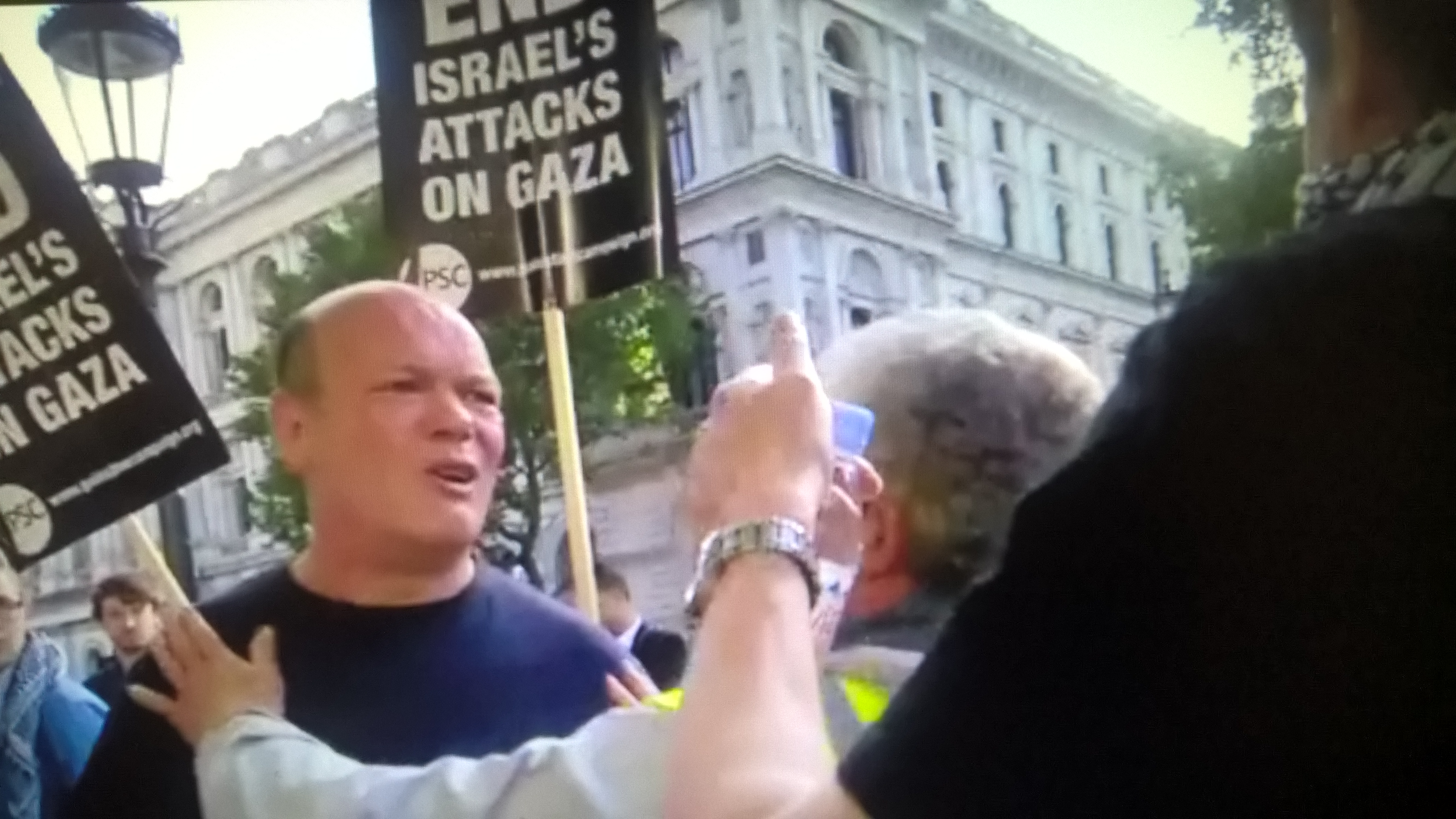 From Hezbollah to Hamas. The PSC rally at Downing Street 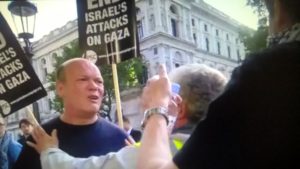 After the events of last weekend, when the Hezbollah flag was raised in London, spending an evening at a rally with the Palestine Solidarity Campaign (PSC) seemed positively benign. How wrong I was.

08 July 2016. Richmond Terrace, London SW1A. An area directly opposite Downing Street that is used for demonstrations. It is two years since the 2014 Israel–Hamas conflict, and today the PSC dusted off their ‘stop the attack’ banners, and came out to protest.

But it isn’t 2014 anymore. It was staged to be a big event. It was an anniversary, it was advertised heavily by the PSC minions, their ‘interim head honcho’ Sarah Apps was there, as were their other ‘chiefs’.  By half time I heard conversations amongst the organisers making excuses for the low turnout. Scores of banners were left by the sidewalk, with not enough hands to raise them all aloft

A fact about the state of pro-Palestinian activism is this: More people turned out for the Hezbollah Flag than for this PSC anniversary. There were 170, maybe 200. The Facebook event page suggests 557. It seems lots of those that did attend have multiple accounts on Facebook.

I did learn that I need to take my disguise up to another level. I was wearing a hat and a large Keffiyeh, but was ‘clocked’ as soon as I entered. The PSC and I have history, I am passive, I am an ‘investigative journalist’ and they don’t like what I write. A ‘persona non grata’ they can do little about.

A few minutes later, I saw familiar faces coming towards me. One of the stewards said “Hi Dave, or is it John”, as a way of telling me they know I am there (John is the name I use sometimes with delegates).  But this isn’t the NUT HQ. They don’t own this space. This is public land. I ignored them and start to mingle. What can they do, announce my presence on the tannoy so no-one speaks to me?

After a while I saw several people enter from the South side of the demonstration. They wore black scarves, black hats and were handing out leaflets. I counted 5. One approached me and I read what he was distributing. A pro-Israeli leaflet ‘why you should support Israel’ and another, highlighting the ignored casualties of other, far more bloody conflicts.

They moved through the crowd and I followed. I saw the stewards begin to react and several in the crowd also started pressing their way to the ‘masked invaders’. Suddenly I heard someone shout ‘don’t push me’ as a sign it was turning physical.

And it had. Several of the hard core activists wanted violent confrontation. The stewards tried to maintain calm. A crowd gathered. Abuse was thrown, fighting started and was quickly squashed. Leaflets were snatched and thrown to the ground. The police arrived.

The pro-Israelis were taken to one side by the police. Unmasked now, I saw one of them was Joseph and realised this was an Israel Advocacy Movement (IAM) action. Andrew was there, Ben, Chloé, Micha and perhaps a couple of others.

The police formed a line between the two groups and the IAM crowd took out their Israeli flags. On the one side a mob of angry anti-Israeli activists, on the other 5 people with the courage to face them.

The distance between the two groups was negligible. A woman by my side ducked and lunged towards the Israeli group, but was stopped and pushed back. Lighter in hand, it seemed she had wanted to burn an Israeli flag. Looking back over the footage, I saw that the lighter had been placed in her hand only during the confrontation. She never made it through the line of stewards.

There was verbal abuse and a stand-off. More distance was placed between the two sides and the organisers tried to bring people back to the rally. There were still people talking on the stage, microphone in hand, but almost nobody was listening. The mob was where the action was. Hating a Jew clearly far more enticing than listening to the same old rhetoric.

Some of the IAM were talking to those who had worked their way to the sides, thus being able to navigate around the dividing human barrier. This interaction is what people like Joseph seek. Discussion. It isn’t just about exposing and highlighting the ignorance on camera, but about trying to change people’s minds.

The PSC are not the Hezbollah crowd. Many of their wider members are what I call ‘uninformed haters’. They’ve swallowed a false narrative, but the intent, however vile, is driven by naivety. People who buy the manufactured concern. Some of the people you meet are truly pacifists, who fail to understand the implications of the aims of the movement they support.  The ‘fools’ of the not so hard left.

PSC are dangerous because they place a peaceful western façade on top of a brutal Arab nationalist /religious cause. They are deceptive. They understand the value of the brand and will evict those within who cannot tone down the rhetoric or play the game properly. It doesn’t matter what you think, just don’t be seen publicly thinking it. The PSC way.

But this wasn’t the ‘wider membership’. This was a small gathering of hard core support. The cultists. Left wing radicals, British people who call themselves Palestinians, a few ‘asaJews’ and the ultra orthodox antizionists. The Neturei Karta arrive late. All 6 or 7 of them. After the Hezbollah rally, I had some conversations with ultra-orthodox people in Stamford Hill to find out more about them. All coming from a single synagogue, these few are considered extreme even within their own extreme community. Standing on the side of Ishmael against the house of Isaac. Outcasts, even amongst their own.

But they make a good cover picture for anti-Israeli actions. It provides good PR material, and that is what anti-Israeli activity is all about. Glossing over the violence, hiding the aims, talking in words of equality and peace. Placing the child in danger and then using the outcome as recruitment material. A hypnotic repetitive refrain of ‘freedom’, by people seeking to extinguish the only freedom that exists in the entire Middle East.  The typical PSC rally. Except of course for the presence of the Israeli flags.

Edited to add: A video has just been posted (10/7) by the IAM, that shows the violence from the perspective of those attacked. It is vital viewing.

Keep up to date, subscribe to the blog by using the link on the page. Follow the FB page for this blog: and follow me on Twitter. Please if you can, also consider making a donation. I am currently seeking funds to purchase better recording and surveillance equipment. Mine is an independent action and research is expensive and time consuming. Even producing just one of these piece does take days, sometimes weeks, and whilst I do what I can, there are serious constraints that impact on what is possible.

2 thoughts on “From Hezbollah to Hamas. The PSC rally at Downing Street”