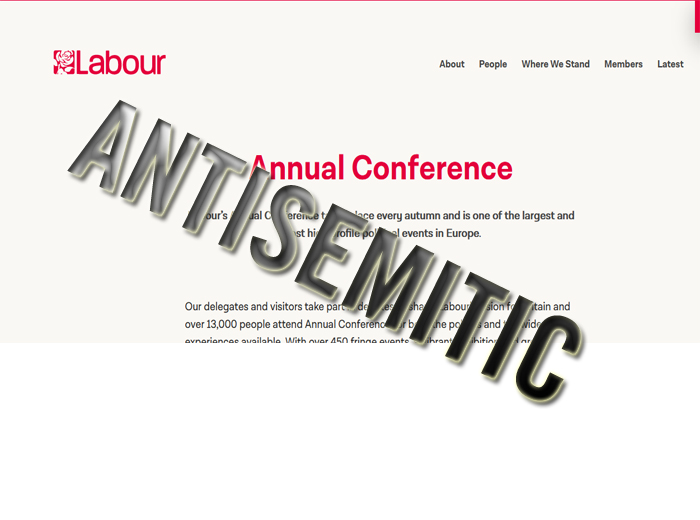 This weekend the Labour Party Conference opens again in Brighton. I was there in 2017 the last time it was held in the town, and the level of antisemitism witnessed at the event led to threats to ban the party from holding future conferences there unless it tackles antisemitism. I find it difficult to believe how anyone left sane on this planet actually believes Labour have tackled anti-Jewish racism – and yet here we are.

Running alongside the conference there is the ‘fringe’. A host of events that allow Labour ‘deniability’. Most of the entities who bait Jews or rely on antisemites for support, manage their antisemites with a similar strategy. For example, the Palestine Solidarity campaign (PSC) distances itself from the high levels of antisemitism in their camp by denying any responsibility for its own branches. At conference, Labour uses the fringe. The fringe contains hundreds of events by organisations that are not officially ‘inside’ the conference. But whether the Labour Party like it or not, there is a registration process and the party have to accept you.

There is little excuse for the run of events scheduled for this year’s conference. Both Jewish Voice for Labour and the PSC have official fringe events scheduled. But the true situation is worse. The gathering of the faithful creates ‘unofficial events’. Inside the Labour CLPs and online forums, groups like Labour against the Witchhunt are advertising their ‘unofficial’ events.

Labour’s response of course is – ‘anyone can organise an event in Brighton at the same time as our Conference. This does not mean they are part of it.’ Deniability. In the JC article on the issue the Labour Spokesperson even resorts to the most twisted excuse of all – by suggesting that ‘nobody who has been suspended or expelled’ is a part of the official fringe listings. This may be true, but what about all those the party should have expelled but haven’t. It isn’t for nothing the party is being investigated by the EHRC.

A simple official statement from Labour to say these people are not welcome, nor wanted by the party, may have ‘cleansed’ some of this, but those inside the Labour Party know that their movement is as reliant today on the energy of antisemites, as the PSC is.

Jackie Walker is one of those expelled. Not explicitly for antisemitism of course but rather for ‘prejudicial’ and ‘grossly detrimental’ comments. Walker is also due to speak at conference at an ‘unofficial’ event. Yesterday she held an event in Brixton. A screening of her ‘witchhunt film’. Only about 15-20 people showed up, which Jackie blamed on deliberate ‘ghost booking’. A strategy that has the ‘other side’ booking in large numbers to make the event planner think it was full and stop taking bookings. As usual Jackie’s conspiratorial mindset is working overtime.

Sitting in the audience was Mike Cushman, a leading ‘official’ representative of Jewish Voice for Labour. No doubt Mike is part of the ‘official’ fringe. This raises the first interesting point. On every chair was a JVL flyer. This is the ‘official fringe’ and the ‘unofficial fringe’ holding hands. The acceptable and the unacceptable working together. It shows how ridiculous the strategy of the Labour Party is and throws in the bin the absurd notion that they care about fighting antisemitism.

Thanks to Eye on Antisemitism, and for reasons that will become clear, I was given a recording of some of the discussion.

Jackie’s ramblings were made up of the usual distorted, nonsensical and offensive statements that make up most of her act. She went on about how all genocides are equal, not even bothering this time to mention the Holocaust by name. The main problem with this is that even to begin to accept her argument, one would first have to accept Jackie is sincere in not understanding why Europe would be chiefly concerned about an industrial genocide it committed on its own soil against its own Jewish citizens just 75 years ago. Then there is the ‘hierarchy of racism’ which is basically another way of saying Jews hold the power. Of course, there was a lot of talk about empty smears and the witchhunt and about ‘Jackie the victim’. One issue worth raising is when she mentioned anti-Zionist Jews.

‘I want to say something very quickly about the Haredi (orthodox Jews). The Haredi make up about a quarter (Cushman interrupts her and says a third – at which point she corrects herself) of the entire Jewish population. And they are all anti-Zionist’. Where are their spokespeople? And can I tell you I know because I speak with them – they are silenced as well’

Jackie is lying. Primarily this comment shows a horrific misunderstanding of the history of the Jews and Zionism throughout the 20th century. Which would be odd for someone who is making a career talking about it. Anti-Zionist Jews are a tiny number -fact. A fraction of the community – fact. Non-Zionist Jews make up another small part. But the notion that the Haredim are a silenced anti-Zionist community is wrong, insulting and absurd. A third of British Jews are anti-Zionists?

Jackie is claiming ownership of a non-existent Jewish community to attack Jews with. Perhaps she would like to explain the existence of both Shas and United Torah Judaism? Two orthodox parties in Israel – both of which are aligned in Bibi’s bloc – and which received a combined total of 17 seats in the recent Israeli election. Are they silenced? Do they agree with me or her? Is she suggesting the orthodox Jewish community in Britain supports Jackie Walker over UTJ or Shas? It would chiefly be UTJ over Shas but I am not going into that here.

Vile, unsupportable lies. Bashing Jews with Jews she has made up in her head. The rantings of someone too far lost to be found.

Cushman starts by introducing himself as being an officer at Jewish Voice for Labour. He said he has been a Labour Party member all his life. Cushman then says he has never seen it or experienced it. He is lying. Cushman has been an active member of Palestine Live for four years. He claims to have read my reports on the PSC and Palestine Live. Cushman personally knows people like Elleanne Green. He hangs out in a group with Labour members who he has seen have shared Holocaust denial and neo-Nazi material (unless he is lying when he said he has read my reports – this must be true).

Palestine Live is full of dozens of posts of Cushman belittling antisemitism amongst a crowd of antisemites. Cushman then went on to say that when the allegations of antisemitism made by those like Luciana Berger are examined properly ‘they fall apart like a tissue of lies’. Has he not seen the antisemitic abuse Luciana received? This is Cushman suggesting one of the most attacked female politicians in the UK is ‘making it all up’ for political purposes.

There is one specific incident that needs sharing. After Mike Cushman introduced himself and denied he had ever seen antisemitism in the Labour Party he went for me.

We saw David Collier, he says he sits at his computer finding this stuff. I’m sure that Collier may be obsessive. But you do not find this stuff by human trawling of the internet – you need high grade artificial intelligence services to get this. Now I have always assumed that this was being done from Tel Aviv by Mossad and other security services. I am not saying they are not doing it, but I’ve seen some suggestion and I think they’re very compelling suggestions that a lot of this is actually coming from the British Security Services’.

So, he has always assumed I worked for Mossad but now it is MI5? I cannot be a Jew who has a problem with antisemitism. Collier is not capable of doing this alone. I have to be part of a global conspiracy. This snippet includes those remarks:

This is Cushman being antisemitic. He has turned the Zionist into the Jew. Everything antisemites thought about the Jew, Cushman thinks about Zionists. All he has done – and the only thing he has done – is remove himself and a handful of others from the equation. Only when the Labour Party realise this and see it for the obvious antisemitism that it is, will they even begin to handle anti-Jewish racism properly.

In the meantime. This weekend, under the Labour Party banner and at events promoted inside their magazine, these people will gather to talk at the conference. It is time, Labour did what they should have done four years ago and kick *all* the antisemites to the kerb. Tomororw it starts. Am I going? Apparently I need to receive instructions from my handlers in Jerusalem before I can answer that question.