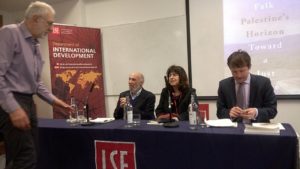 20th March 2017. The London School of Economics (LSE) in Holborn. I am at a book launch for Richard Falk’s latest collection of essays titled ‘Palestine’s Horizon’. Falk has been invited to the LSE as part of a larger promotional tour of the UK. Last week he was in Scotland. Today sees two events, at the LSE and the P21 Gallery in Euston. On Wednesday he is at Middlesex University. Next week he leaves the UK and travels to Cork, Ireland, where he is the primary keynote speaker at Oren Ben Dor’s anti-Israel hate-fest.

Richard Falk at the LSE

Richard Falk carries a long history of  ‘controversial’ comments, statements, positions and actions, regarding Israel.  The Jewish Chronicle described him as ‘a conspiracy theorist’ who ‘has praised the work of notorious self-hating Jew Gilad Atzmon, as well as posting an antisemitic cartoon on his blog’.  During the talk he bats away the accusations with excuses, historical distortions and empty words, but this merely reflects part of the central problem with Jews and UK academia. He did post an antisemitic cartoon, he has made some remarks about ‘9/11 truth’ and he blamed the Boston bombings on the US and Tel Aviv.

On top of all this, he endorsed Gilad Atzmon’s book ‘The Wandering Who’. Note none of those controversies has anything to do with Palestinian human rights. Only when it comes to offending Jews is this type of activity considered acceptable. Nobody with such a long list of offensive statements against any minority group other than Jews, would still be given a  platform inside a UK university.

So when you invite Richard Falk to promote yet another anti-Israel piece he has authored, there should be no doubt most Jews will consider the invitation antagonistic. This isn’t a secret known only to Jews either. Publicly the UK government, has on three separate occasions, ‘condemned’ Richard Falk and his attitude / actions towards Israel and Jews.

Leading the panel was Mary Kaldor, a Professor of Global Governance at the LSE. Kaldor described Falk as a ‘very old friend’. Alongside Falk and Kaldor sat Chris Doyle, Director of CAABU (Council for Arab-British Understanding). Mary Kaldor’s introductory remarks, that set the tone for the entire event, were to suggest the recent UN rejection of Falk’s latest report was the “latest variant” of the argument over free speech and Israel.

I think it is fair to suggest that Richard Falk had been commissioned by a UN agency ESCWA to write a report calling Israel an ‘Apartheid State’. Falk did what was expected of him, and just a week ago, the report was published on the ESCWA website.

The UN agency ESCWA is made up of eighteen states from Israel’s neighborhood. Almost all of them consider Israel an enemy. Almost all of them maintain their regimes through oppressing their own citizens. The list of ESCWA nations includes states such as Saudi Arabia, Syria, Yemen, Sudan and Libya.

The ‘Apartheid’ report was an outrageous product written by a man who has long been discredited. When it was published, the UN swiftly insisted the report should be pulled.  The report was a political stunt that used the UN vehicle for credibility. Part of a campaign that seeks to bolster the boycott movement against Israel (BDS) by applying the UN seal of approval. An attempt to shoehorn Israel’s complex conflict with the Arabs into the context of a black and white ‘Apartheid’ label. Between them, Falk and ESCWA got caught using UN funds to further sectarian hatred.

I am sure Kaldor understands that when a peer review publication rejects an article, it isn’t acting against free speech. By labeling the rejection of the ESCWA report  as part of the argument about free speech, Kaldor had allowed us a glimpse of the confusion in her head. It wasn’t going to be the only time during the event she did so.

The stupidity of the LSE panel

Kaldor is a Professor of Global Governance. Much of what is wrong with the UN, and more specifically, is behind the hypocritical and morally corrupt output of agencies such as ESCWA, is described in introductory texts on governance. If Kaldor adhered to the majority of academic thought in her field, there is little doubt she would side with me over the mechanisms that produce reports such as these. Instead, something is getting in the way of rational thought. Sorry Mary, but anyone who has hidden behind a report commission by Saudi Arabia, Yemen and Syria has given up the moral high ground. 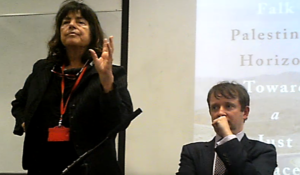 This blindness is almost inexplicable. Perhaps it is simply a matter of faith, a religion if you will. Whatever the reason, Kaldor was the ‘enabler’ of this LSE event.  As Jews, we shouldn’t need to point fingers at Falk any more. There is nothing left to explain. Beyond being a useful tool for despotic regimes and antisemites, Falk is too discredited to be associated with.

Kaldor was clearly taken aback, surprised at the unfolding events in the room. This a sign of her naivety or foolishness. Falk does not have to say anything vicious in his talk. At this point in his career, his presence is a catalyst. Jews turn up already offended that the University has allowed him a platform, and perhaps more importantly, acting as a light trap to fruit flies, he attracts antisemites into the room.  In Falk they receive wish fulfillment and Falk seems to gladly facilitate the ‘oldest hatred’. The venue fills with people, the offended Jew, the intellectually misplaced, and the Jew hater that wants to be fed.  This is the ‘academic’ level that a Richard Falk event can bring. The LSE sullied their name by inviting him. Kaldor, like a young child playing with a match, expresses surprise when fire breaks out.

The world is a more dangerous place for Jews because of people like Kaldor. Israeli Jews just become valueless specimens inside a test tube of Kaldor’s academically driven utopian ideologies. If she is wrong, hey, so a few 1000’s of Israelis die. It wouldn’t be the first time and it wouldn’t even touch the sides of Kaldor’s laboratory. There is no introspection present. She oversaw an event that was to witness Gilad Atzmon deliberately goading Jews, and yet still felt compelled to announce her ‘shame’ at the way the Jewish people present handled the incitement. This Professor has sold her intelligence and integrity up the river and can now be counted as one of life’s galactically stupid human beings.

Atzmon, his mother, and a woman named Pam

Early on in the talk, prior to any questions being taken, the audience was made aware of the presence of Gilad Atzmon. Atzmon takes pride in trolling Jews.  When I heard his voice and realised he was there, it simply made a bad situation worse. Atzmon was towards the back of the room, sandwiched between Pam Arnold (Hardyment) and Ariella Atzmon, Gilad Atzmon’s mother. More flies that had come to bask in Richard Falk’s light. How delightful. 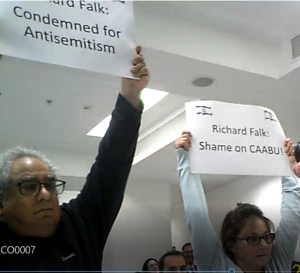 Questions were asked and left unanswered.  Someone asked Falk why the report was sponsored only by a long list of vile regimes, he received no answer.  Another dealt with problems in the underlying methods detailed within the report, he also received no answer. Falk chose instead to respond to those questions that were either personal criticisms or ideologically in tune with him. Deliberate or not, the academic challenge was avoided.

As Falk excused his antisemitic cartoon, his conspiracy theories, and attempted to hide his long history of inexcusable bias behind the academic protection of Mary Kaldor, the hostile questions spilled over into a visual protest. Two Jewish members of the audience, Jonathan Hoffman and Sharon Klaff, held up signs in protest at Falk’s presence. The signs were ripped up by security and the two were asked to leave.

As they were escorted out, it is claimed Atzmon and other audience members yelled antisemitic abuse both at those leaving and the Jews still in the room. Jews were told to read the work of Holocaust Denier David Irving and it was suggested Jews were expelled from Germany for ‘Misbehaving’. As those responsible for physically threatening Jews and hurling the antisemitic abuse remained in the room, it seems to Professor Mary Kaldor, being a protesting Zionist is the greater crime.

There was an interesting exchange immediately after Hoffman and Klaff left the room. As some Jewish audience members expressed their outrage that Atzmon had brought up Irving and Nazi Germany, Mary Kaldor began to speak about how embarrassed she was at the behaviour of the Jewish Zionists. For her it was an illustration of how ‘free speech’ is being closed down in this country. When someone challenged her on those grounds, and asked her to also condemn BDS for the way it closes down free speech, she avoided the hypocrisy the question exposed and told the person he could just ‘leave the room’.  Kaldor visibly did not like being challenged and did not respond well to it.

BDS was constantly referenced throughout the event. It always is. None of this has anything to do with real academia, but rather, it is academia being used to promote BDS to students by artificially providing it with academic support. It is why suddenly Israel is spoken of as an example of ‘settler colonialism’. If BDS is not positively referenced, then the entire event becomes an opportunity wasted. In any event, this awful event was over.

The bad feeling created inside the room spreads outside and there were several verbal exchanges as more of the audience leaves the room. One of the students had even left in tears during the event itself. Atzmon and Arnold bask in the reaction of others. Eventually, the LSE security begins to shepherd everyone out of the building. There is yet another confrontation, this time with Atzmon’s mother, who suggests the behaviour of the Jews is the reason nations keep expelling Jews. The apple never falls far from the tree.

The LSE stewards try to split the sides up, encouraging them to walk in different directions. ‘Maybe peace will come one day’ they say. This the reduction at work at the LSE; Jew and antisemite, becoming two problematic sides that need to learn how to accommodate each other. We even got to see what side LSE academics chose to stand on. A truly sickening experience.

35 thoughts on “A sickness at the heart of Academia, blindness at the LSE”