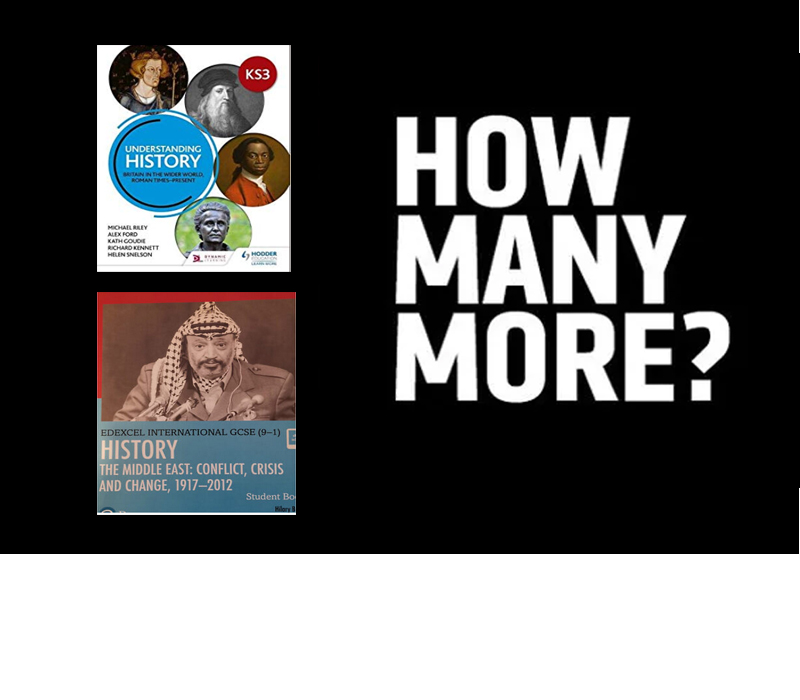 How many more school textbooks are spreading lies and hate?

School based revisionist history and antisemitism took centre stage again yesterday as more evidence of the rancid distortions that are freely taught to our children came to light. In a sign of how bad things are – this news didn’t even break in the UK.

I first got hold of the story through a post published on the US based blogger ‘JewishChick’s Facebook page. She had uploaded an image of what seemed to be a school textbook posing a question for students – asking whether Israel bore ‘long term’ responsibility for the 9/11 attacks:

I tracked it down. Hachette UK, which owns ‘Hodder Education’, published the book ‘Understanding History: Britain in the Wider World, Roman Times – Present’. The book was co-written by Michael Riley, Alex Ford, Kath Goudie, Richard Kennett and Helen Snelson, all people engaged in teaching history in the UK. It is for KS3 (ages 11-14) and seems to have been well received by teachers and students alike:

The book only referenced Israel once – on pages 240-241 – in a section about causes of 9/11. Popular publisher – popular book – outrageous question. How is it possible that this has been published, distributed, taught in schools AND yet it still took an American blogger to tell us about it? Where are our own guards?

For 1000s of years people who have had control of children’s education have found ways to tell lies about Jews. Today they do it through demonising Israel. Just a few months ago Pearson’s were forced to take a revisionist textbook off the shelves – and now this. How many more are out there? Children who are taught this stuff – are going to become adults – with opinions, votes and power.

I honestly do not think this was anything more than sloppy. With someone like Ilan Pappe – you know it is deliberate. Inside this book there is a ‘tell’. In the short description of Israel, the book states that 500,000 Arabs ‘fled their homes’ in 1948. An anti-Israel activist intent on distortion would most certainly have claimed these people were ‘expelled’. This leads me to believe this is an error of academic incompetence and arrogance.

Why incompetent? Because there were so many mistakes in so few paragraphs. This was a history book – it has one job – to teach children what happened – and instead it sent a few nasty lies directly into the children’s minds. 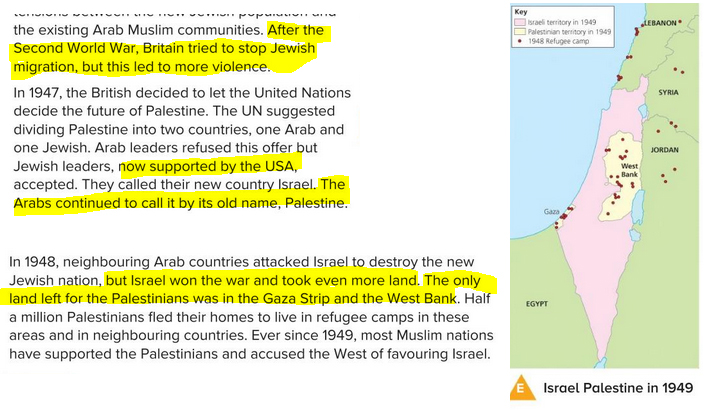 I’m not going to go through each of the mistakes – instead I will use just three inexcusable lies. The first is to suggest that Britain tried to stop Jewish migration after the war. The most basic student of this history knows that Britain had spent many years BEFORE the war, curbing Jewish immigration – leading to the infamous and deadly 1939 White Paper. The second I will mention is the map. There was no Palestine in 1949. In 1950 the British even recognised Trans Jordan’s annexation of the lands it captured. Finally the accusation that Israel ‘took even more land’ – that is demonising distortion.

Here is one more whopper:

A math question. IF 95% of the people who lived in ‘Palestine’ were Muslims – over 10% were Jewish and 10% were Christian, THEN how many % do you have? This isn’t an activist at work. This is someone who doesn’t know the history – is partially driven by political ideology – and has the arrogance to believe they are fit to write textbooks without possessing the skillset or the ‘tachat’ (backside) to do it.

The publisher has withdrawn the book. They are no doubt going to edit out the 9/11 error. I suggest they do far more than that. How can so many mistakes exist in the first place? In a few short paragraphs there is more than enough evidence to suggest this book has been put together by cowboys. There is NO reason to have ANY confidence in the rest of the book. If the publisher cares about educating children at all – this book won’t be republished without historians – experts in their fields – going through every paragraph of it with a magnifying glass.

The 9/11 error is different. It is not evidence of being bad at history, but rather evidence of ideological spin. The authors were not trying to suggest Mossad was ‘behind 9/11’ – what they wanted to do was blame the victims (the west) for radical Islamic terror attacks. The Jews as always become the easy scapegoat. A page earlier they asked the same question a different way:

This isn’t teachers teaching history – it is them pushing an anti-western narrative onto our children. In their eagerness to drive home the point by reframing the question a page later, they combine the hard-left’s well-known view of Israel as nothing more than a colonial outpost – and end up stumbling all over antisemitism. In an act of stupidity, they try to suggest Israel may hold the key to 9/11. Rather than focus on oil, the Soviets, the Cold War, Pakistan, Afghanistan, the Sunni-Shi’ite wars, Arab factionalism, the rise of Arab Nationalism or any of the other major contributors to the rise of Islamic extremism – they actually focus on Israel. Yes, forget all the actual history – it is the Jews who cause all the wars.

Two school books in as many months

Two UK school textbooks have been withdrawn from use in the last two months. Both contained as much fiction as fact and both carried underlying antisemitic messaging. These books TEACH our children lies – AND install antisemitism (Jews are to blame for it all) into the school system. These two books are just the tip of the iceberg. We have to get a firm grip on this. These books are not just teaching children – they are indoctrinating future leaders and managers. Why do we think our environment has deteriorated? Because we are looking now at the product of allowing this to happen in school to a previous generation and thinking it unimportant. Where did these teachers come from – if not our school system? There is little more important than addressing the control this hard-left ideology has over the education of our children.

A few days ago, I wrote that I was going to do deeper research into anti-Zionist antisemitism within the school system, focusing mainly on the union – the NEU. I can confidently write that I have never had such a response from so many people to a request. I am still wading through a list of those who sent private messages and have stories to tell. I have a lot of work to do and you will certainly be hearing more from me on this.

In the meantime, we have to turn to Government. It shouldn’t be down to the Jews to have to search through textbook references to Israel – to find the lies, indoctrination and antisemitism. This is someone’s job and they are not doing it properly. They cannot be allowed to outsource the problem to the victimised minority. It is time for us to demand more.

51 thoughts on “How many more school textbooks are spreading lies and hate?”